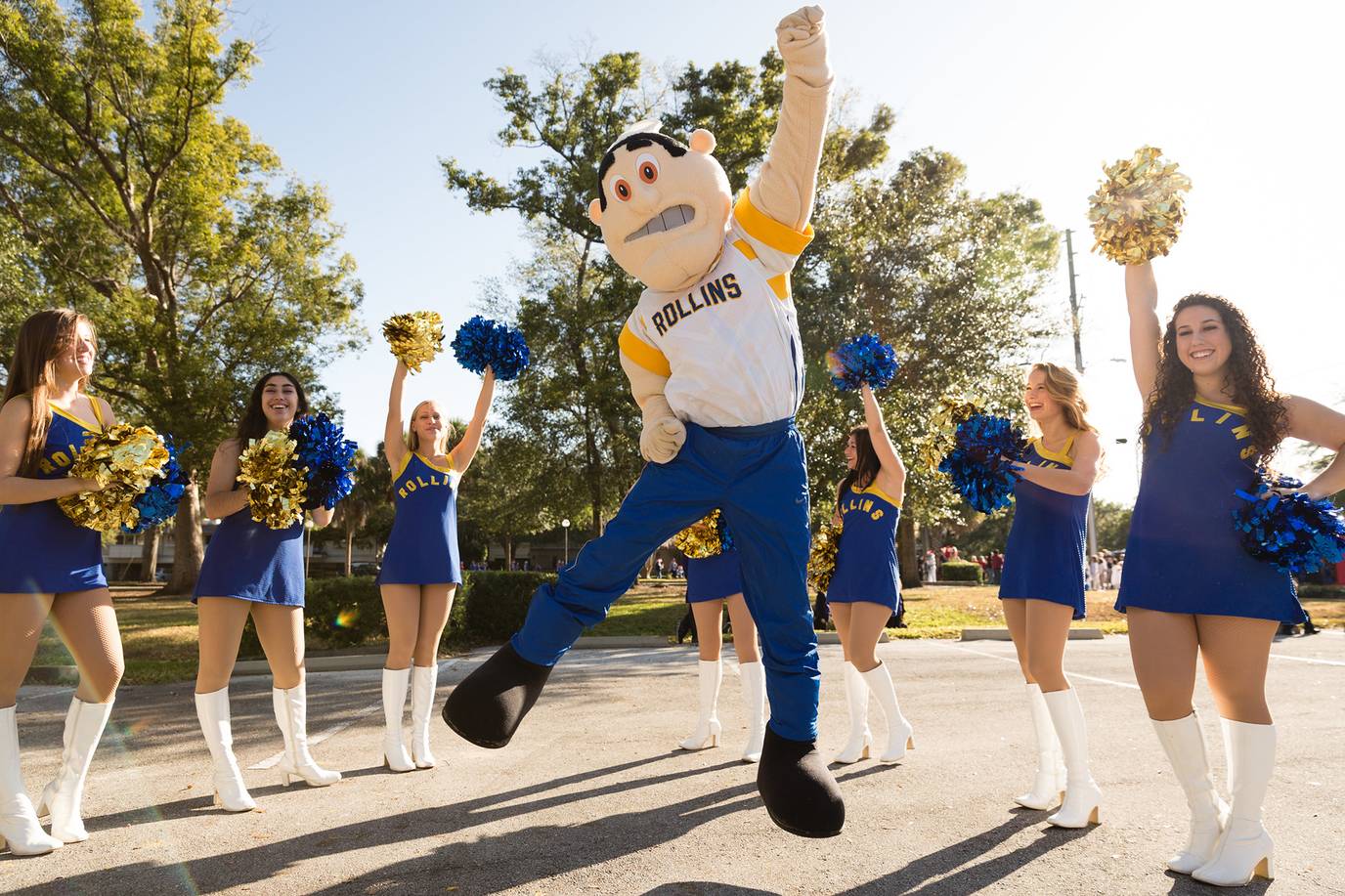 It’s an age-old question uttered countless times by first-year Rollins students and their parents, not to mention athletic opponents and their fans.

There are other unusual collegiate athletic nicknames—the Salukis, Billikens, Banana Slugs, Anteaters, Horned Frogs, Poets, Hatters (our neighbors at Stetson), and even the Fighting Okra of Delta State—names that however silly somehow make sense.

Where Did the Tar Come From?

The use of “Tar” as Rollins’ athletic nickname and mascot begs the question, however: whence did it come? Lake Virginia is lovely, and the Atlantic Ocean is an hour’s drive away, but how did the eponymous English mariner become the symbol of the College?

The irony, as Dean Emeritus of Students Affairs Steve Neilson noted, is that “there never was a concrete decision made by anyone to adopt the Tar as our symbol and mascot; it just sort of evolved over time and took on a life of its own.”

Before 1917, Rollins’ athletic teams were known as the “Blue and Gold.”

The first official image of the Rollins Tar appeared in April 1948, when Wanita Mutispaugh ’35, who had studied art with McKean when he was an art professor, submitted a sailor emblem as a possible Rollins symbol. With surprisingly little discussion, it was sanctioned as the official “Tar” image. Mutispaugh’s illustration, however, was of an extremely rotund sailor in profile who looked more suitable for a sumo wrestling team than any lean, mean fighting machine. Small wonder the Tar had little emotional resonance for students. Accordingly, in April 1965, the College officially adopted a “more trim and zestful” Tar that would stick around for decades.

Rollins set the Tar upon a course of permanence and even affection in the 1960s, reintroducing the mascot with the 1965 Annual Fund appeal, and through the ’70s and ’80s students seemed content to cheer on their sailor surrogates. During that time, the College’s first “human” mascot appeared on the athletic scene—a creature with a big plastic head and eyes in the shape of anchors. Tony Lembeck ’79 even wrote a College Fight Song called “We’re the Tars,” while Spike McClure ’81 devised a chant similar to the song “YMCA,” using his body to spell out the letters for “TARS” at basketball and soccer games, to the delight of the crowds. The Tar was actually kind of “cool” in the ’70s. But so were Fonzi and mood rings and polyester leisure suits.

In 2005, the Tar received new personification in the form of “Tommy Tar,” a costumed mascot who is a sort of cross between Popeye and the Pillsbury Doughboy. Tommy Tar isn’t quite as popular as the San Diego Chicken, but he is a favorite with students at athletic and other College events.

We Are the Rollins Tars

Over the years, the unusual and mysterious beginnings of the symbol and its desultory application and dubious connection to the College have led some to demand a change. Students in 1992, for example, were asked to bring their “Trash the Tar ” entries to The Sandspur office and the top three entries would receive tickets to see the rock band They Might be Giants.

1. Though “Jack Tar” originally applied only to those men who worked the highest reaches of the rigging, over time it referred to all deep-water sailors. These sailors used tarpaulin, a canvas permeated with tar, to cover and seal deck hatches to protect cargo. Tarpaulin was also used to make windproof clothes for these men working in rigging in nasty weather. In addition, sailors slathered tar on the rigging to protect it from the elements, and even on their long hair to keep it in place. The large square collar, or bib, you see on sailor suits protected the sailors’ uniforms from the tar in their hair.

2. The United States was sorely unprepared for World War I, and decrepit whaleboats were probably the best the Navy could provide for training the sudden influx of naval volunteers. These boats, the article went on, “after lying for several years, abandoned and rotting on the shore near the old boat house, were finally burned, much to the delight of Chase Hall and the disgust of the Winter Park Fire Department.”

3. According to her son Dan ’76HH, Wanita Mutispaugh went on to become an accomplished artist who exhibited in the Winter Park Sidewalk Art Festival and elsewhere.

4. (Sorry, Tony, but in the interest of the historical record:)

Oh, we’re the Tars of Rollins,
We’re the mighty Tars of Rollins College,
Singing loud and feeling proud of our academy.
Our spirit is unending, our honor we’re defending,
We want a victory.

We’re the Tars of Rollins College.
Gathering together to support those competing,
We will fight and scream and back our team,
Until the job is done.

And when the battle is over, and the Tars have won,
We will sing a song for Rollins,
The mighty Tars of Rollins College.
We’re always number one!