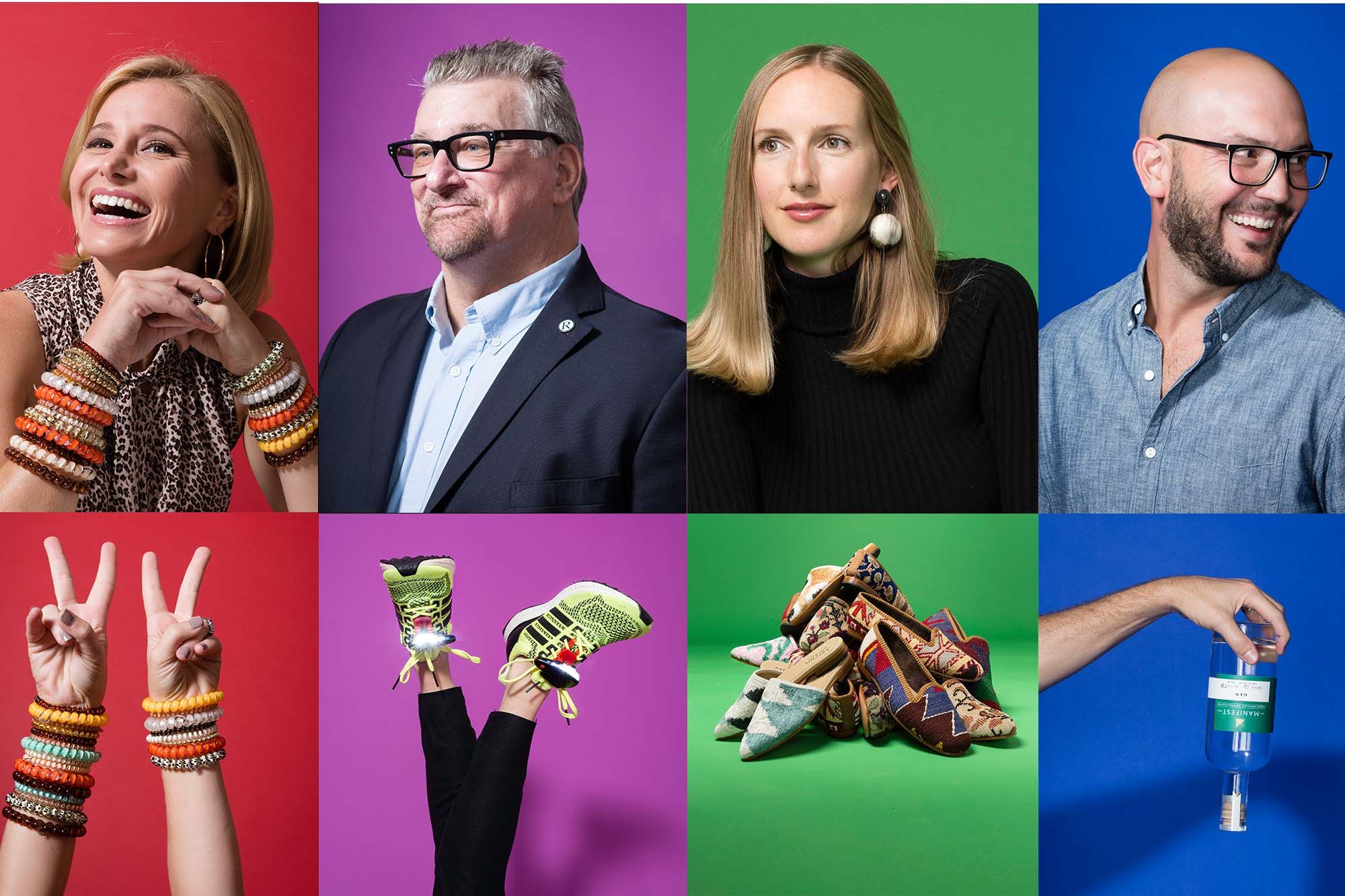 Armed with arts degrees, these Rollins grads have harnessed their creative passions to launch successful businesses in everything from organic spirits to footwear.

At the intersection of the arts and entrepreneurship are the artrepreneurs, those who harness their creative passions and innovative way of thinking to stake out professional endeavors all their own.

On the surface, the worlds of art and business might seem incongruent, but dig deeper and the crossover and commonalities become more apparent. Artists tend to solve problems through creative ways of thinking that, like innovative companies, operate in the realm of uncertainty and opportunity, instead of rote and routine.

Theater majors learn to tell stories, improvise, and make connections. Art history majors learn to see possibilities and identify trends. Studio art majors learn to create their own brand, harnessing the power of reflection and observation. For Doug Storer ’83, that brand became Night Tech Gear, which is sold in more than 50 countries around the world. The studio art major says his Rollins education taught him how to see an idea through from concept to completion.

Studying art history at Rollins—where creativity is an inextricable ingredient of entrepreneurship—turned Milicent Armstrong ’09 and Lindsay Muscato ’07 into visionaries in the world of fashion. Theatre major David Cohen ’02 learned how to get up in front of an audience time and time again until he got it right, just as he’s done in his many successful business ventures that demand improvisation and adaptability.

Here’s how these four arts majors went from Rollins to the real world ready to make their marks. 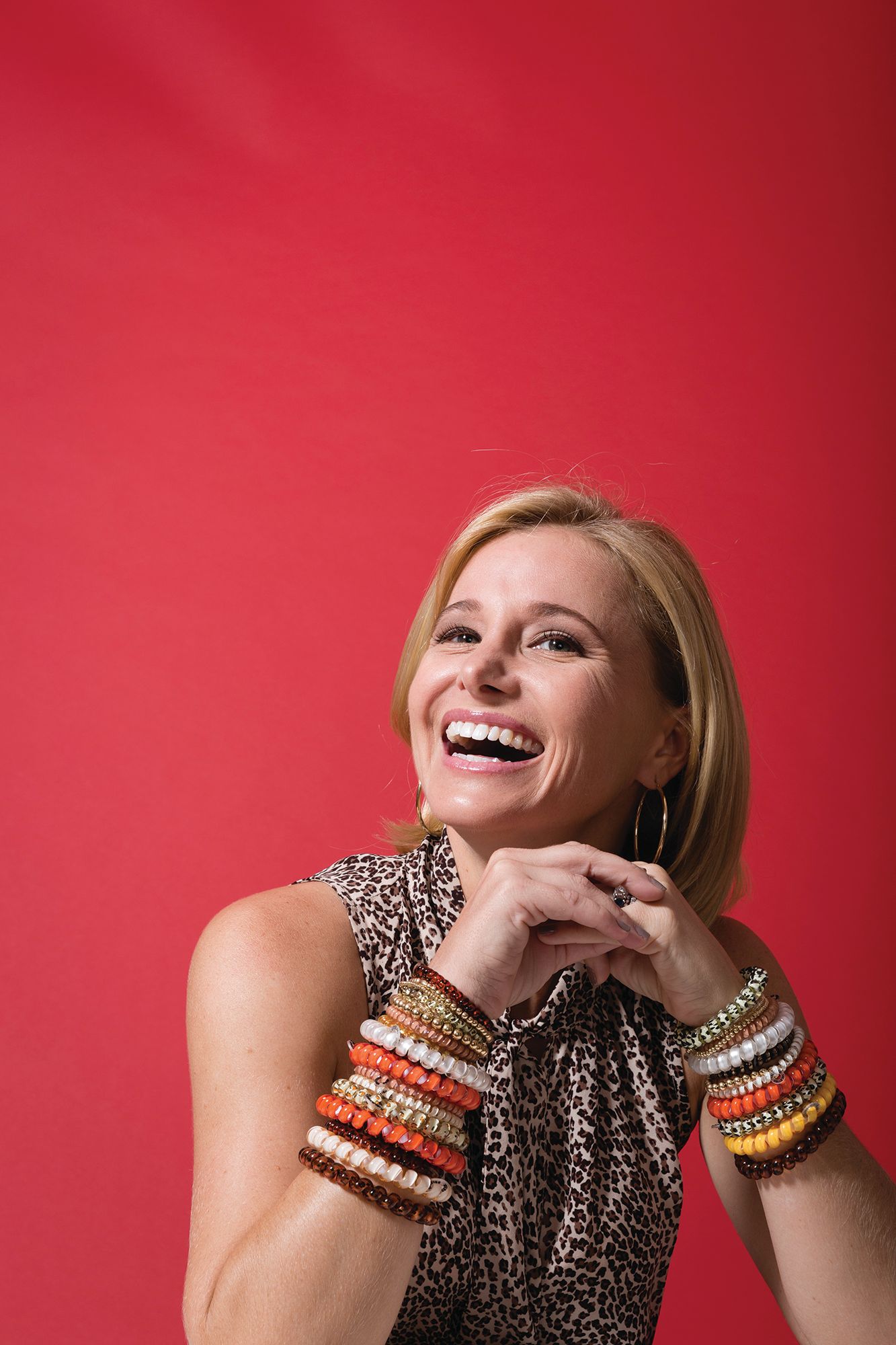 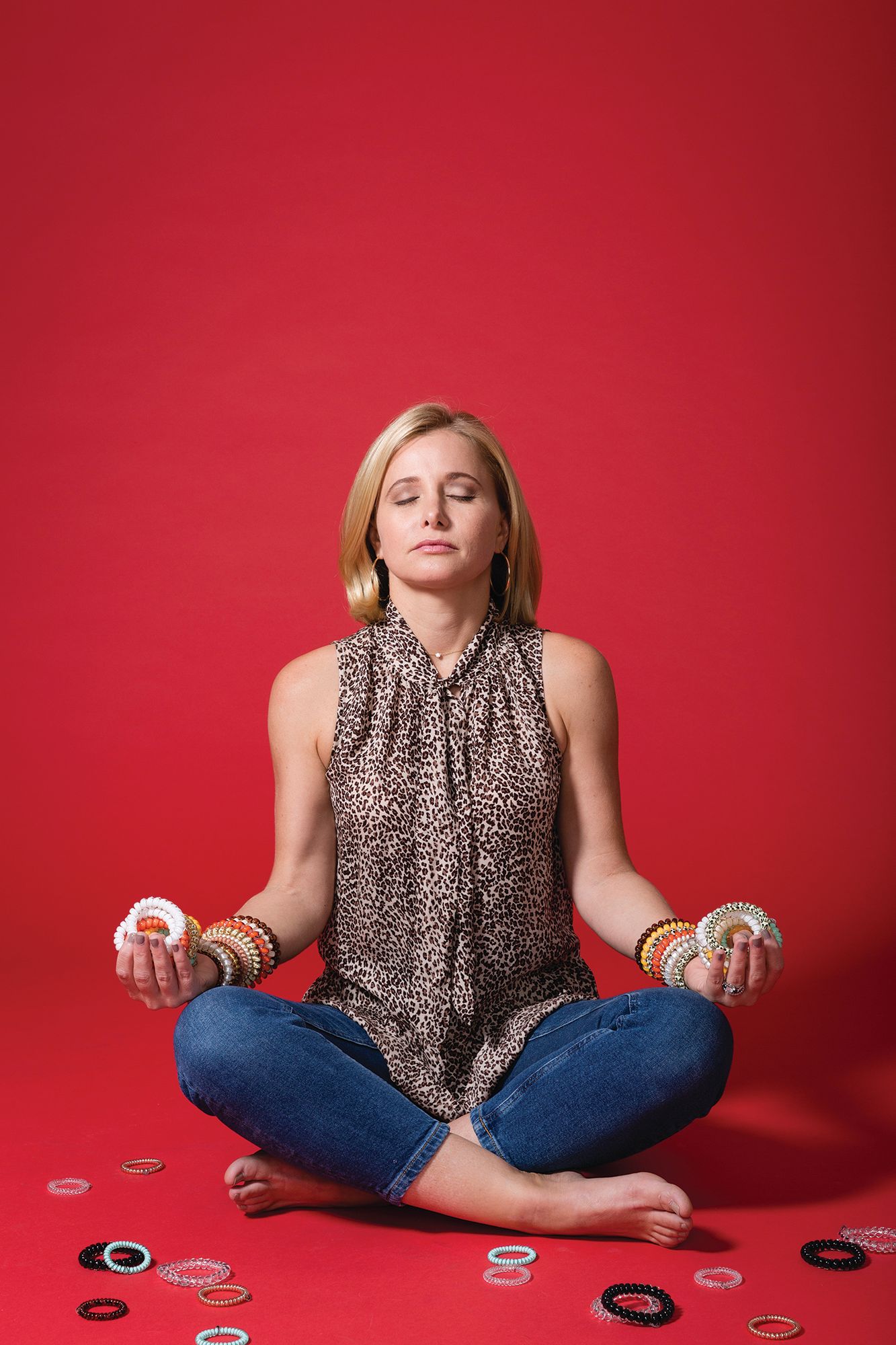 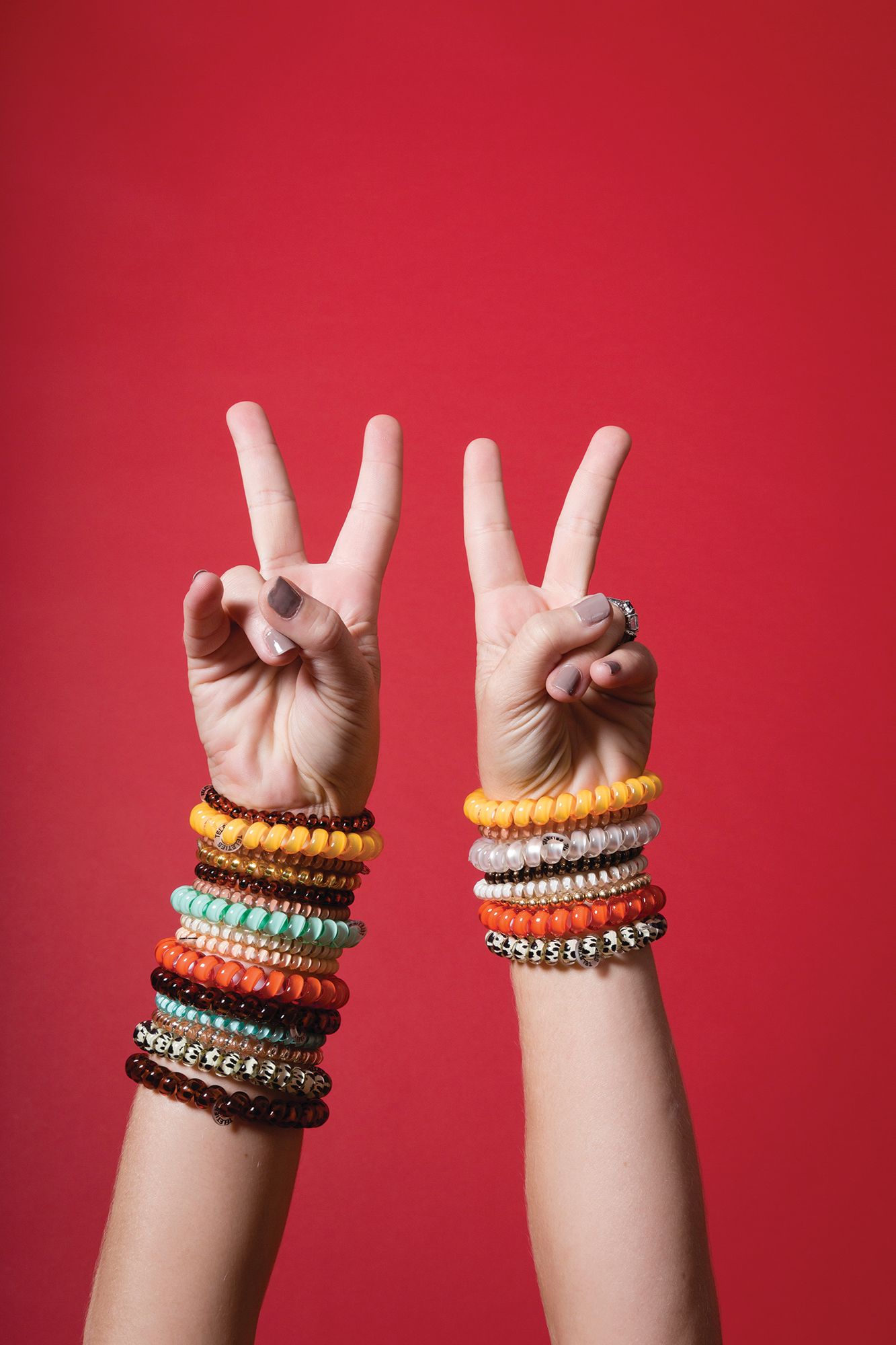 Well before Lindsay Muscato ’07 could create the perfect go-to hair accessory, she had to cinch up a few loose ends.

“Rollins helped me develop a certain discipline that provided a sense of structure to my daily regime,” says Muscato, whose Orlando-based Teleties company produces all-in-one hair ties that double as stylish, stackable bracelets. “It was a foundation that helped me balance starting and managing a business while also being there for my family.”

While at Rollins, Muscato founded her first company, Lindsay Phillips (her maiden name), which developed an interchangeable footwear concept based on the “Switchflop” sandal she pioneered in high school. Muscato sold the company in 2013 to industry leader Trimfoot, which continues to manufacture Lindsay Phillips brand shoes.

“The liberal arts allowed me to foster my creative side, which was a driving force to my entrepreneurial spirit,” she says. “At Rollins, I learned how to think outside the box, which has been a huge asset in the business world. My liberal arts education taught me the importance of preparation for business planning and taking action to execute.”

Muscato credits Rollins’ small classes for providing the ideal learning environment and her art history major for showing her there’s more than one way to interpret something. The latter became especially useful when she started conceptualizing designs, researching materials, and testing prototypes.

As for Muscato’s Rollins connections today, she doesn’t have to look far. Her husband, Brantley Muscato ’12MBA, is an alumnus of the Crummer Graduate School of Business, as is her CFO/COO, Trent Forquer ’12MBA. And Teleties’ first intern, communication major Mackenzie Carter ’21, helped launch the company.

Muscato appreciates how Rollins fostered skills that taught her how to think as opposed to what to think. That approach, she says, “continues to play a large role in balancing my work and personal life.” 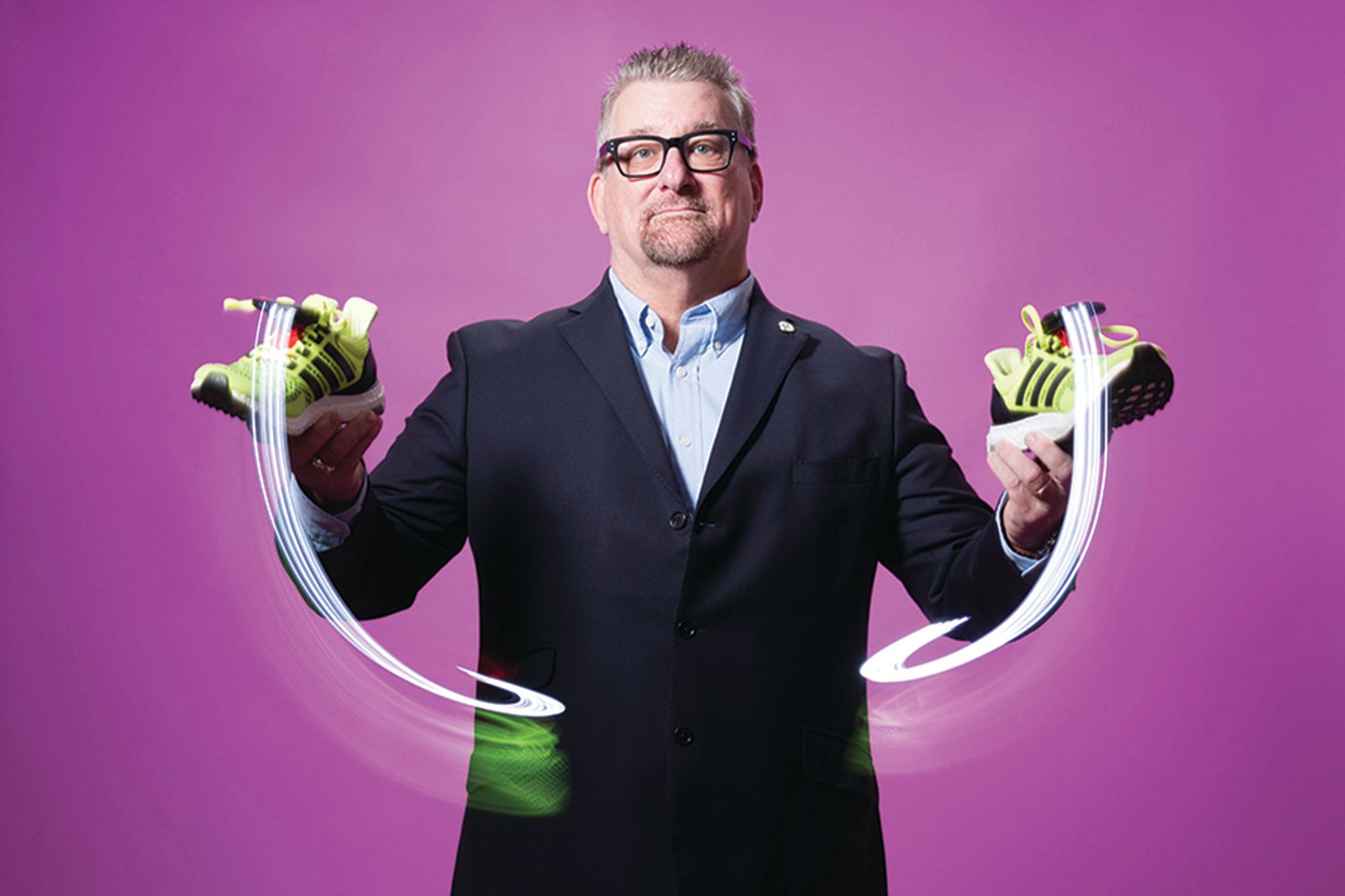 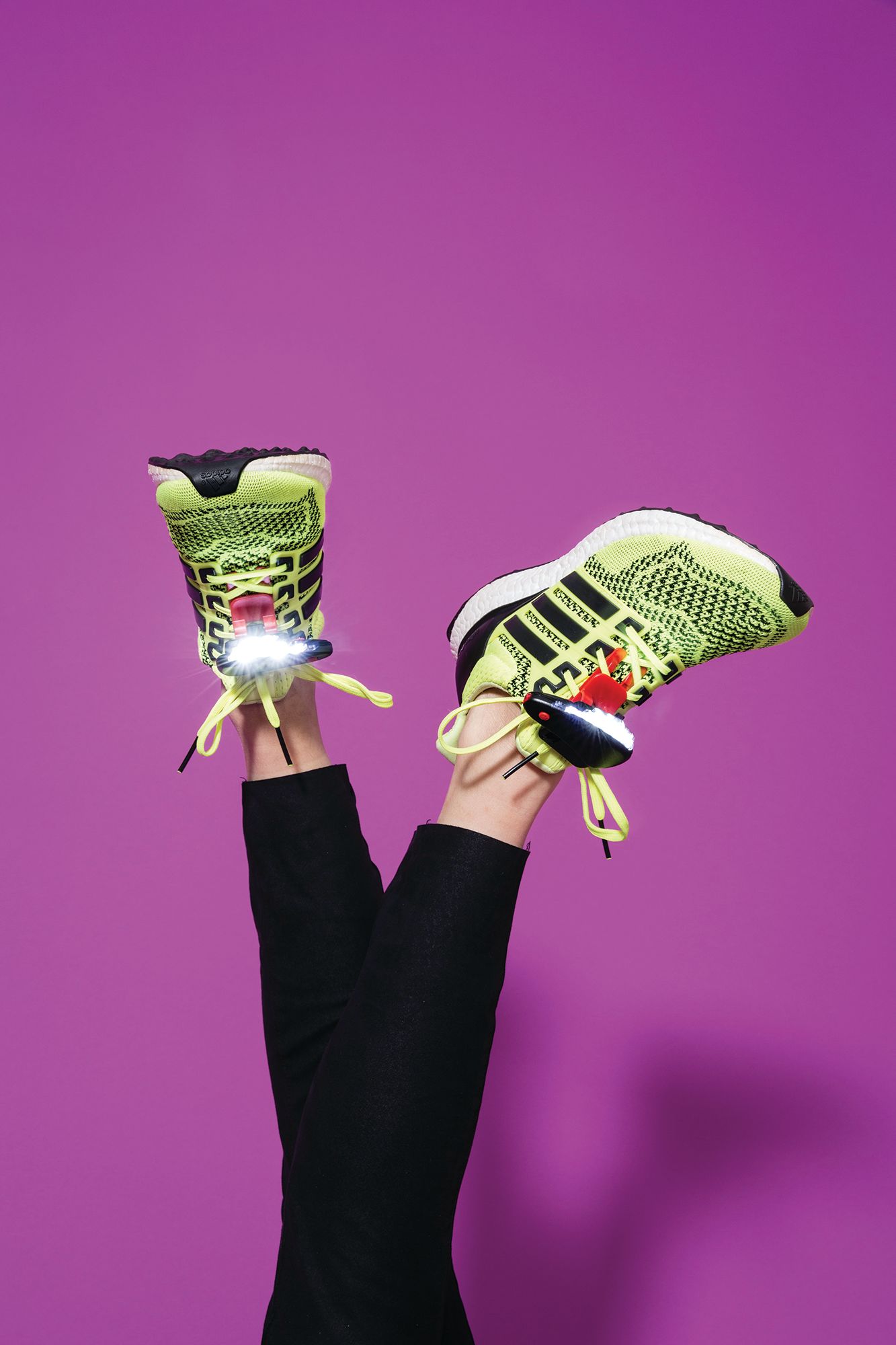 In 2016, after 30-plus years in the corporate world—many of them driving sales programs for Fortune 500 companies—Doug Storer ’83 was ready for a change.

Kicking around a bright idea for a startup, he reached out to the Center for Advanced Entrepreneurship at Rollins’ Crummer Graduate School of Business.

“The guidance, mentorship, and connections proved to be invaluable to our success,” says Storer, who went on to found Night Tech Gear, a shoe-light technology company that caters to athletes and workers. “[Finance professor] Bill Grimm was one of the first to believe in us when I showed up at his office with a crude prototype of a shoe. And [operations management professor] Peter McAlindon and others were always available for just-in-time support.”

Night Tech Gear has since been featured on Shark Tank, Good Morning America, and The Today Show, as well as in Forbes and nearly 100 global media outlets, and the company has generated sales in more than 50 countries.

Storer can trace the foundation for his success to lessons learned as a studio art major at Rollins.

“The fine arts allowed me to be creative,” he says. “I learned how to conceptualize, design, and implement my ideas. I learned to think differently. That was powerful.”

Graphic design and photography were areas where Storer felt free to express himself, and philosophy classes helped him learn different approaches to thinking. Studying Renaissance art and architecture during a winter term in Italy was one of his most impactful memories from his time at Rollins.

Those experiences, he says, definitely translated to the workplace, where creative problem-solving was key to executive decision-making.

“Rollins allowed me to exercise my intellectual curiosity by combining the arts, philosophy, and business without a preconceived idea of what I was going to do with all of that. To have vision, you must be open to all possibilities and not constrained by the status quo.” 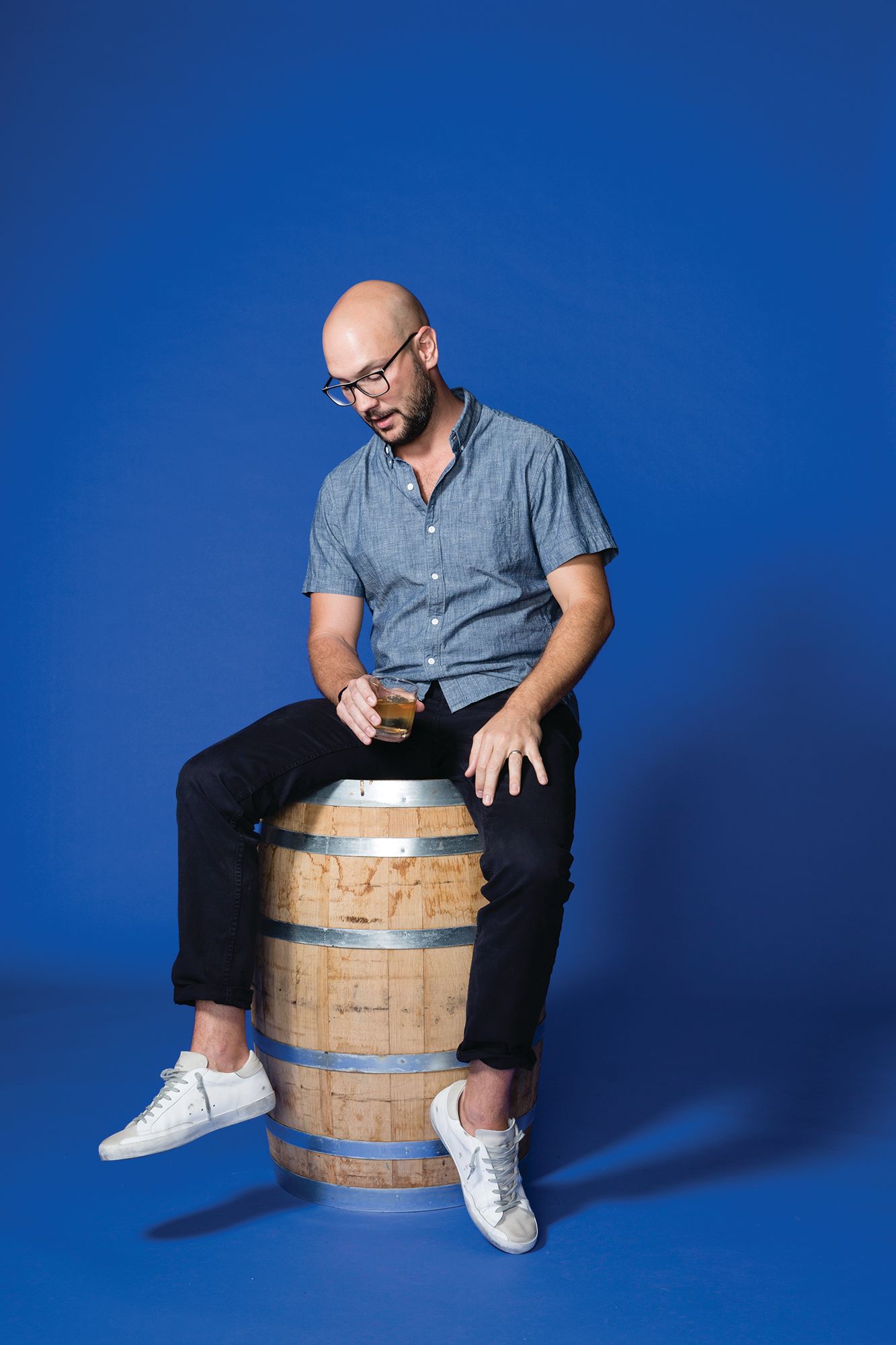 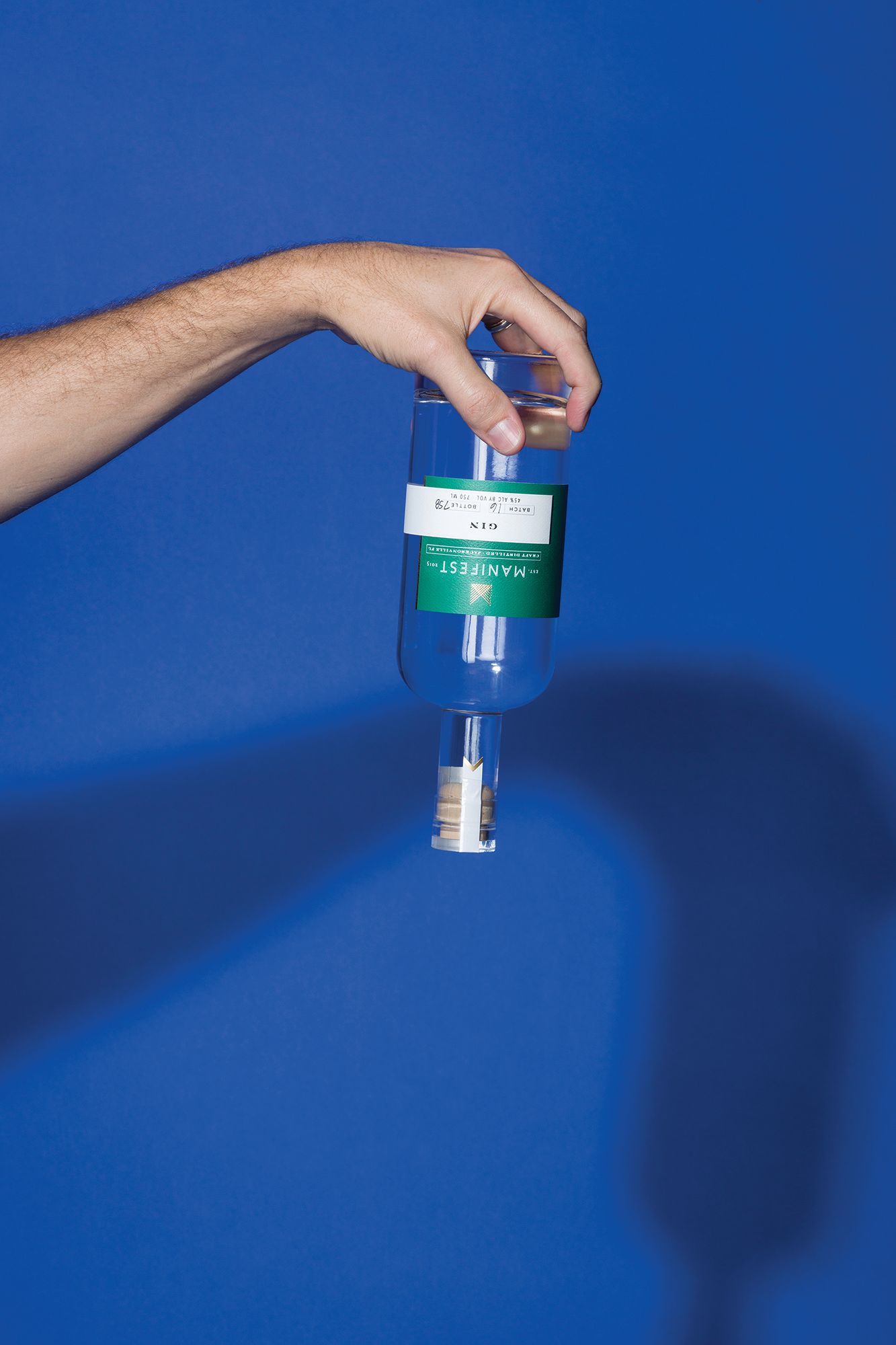 Tucked away in a sleek, industrial warehouse, Jacksonville’s only full-scale organic distillery is a testament to sustainable agriculture and American master craftsmanship, with a healthy dose of the liberal arts thrown in for good measure.

In just five years, Manifest Distilling has gone from startup status to selling its spirits across the state at high-end restaurants such as Waldorf Astoria’s Bull & Bear. For founder, owner, and master distiller David Cohen ’02, the sweet taste of success wouldn’t have been possible without repeatedly missing the mark.

“Failing has been my most important work,” says Cohen, looking back on a career that includes opening and operating several companies, from real estate to film production to publishing.

Cohen looks at each failure as a success of sorts, but only because he’s moved past it to start something new, noting that the key difference is not making the same mistakes again.

“In an Instagrammable world, we don’t often get exposed to how often failure is a part of the success story. Rollins, and specifically the arts, gave me a skill set and confidence to recognize this and forge ahead.”

As a theatre major, Cohen experienced how formal training in the arts builds a unique type of resilience.

“Putting yourself on display, to your peers and the public, requires a certain amount of crazy and bravery,” he says. “I feel that opened a path that allows me to put myself out on a ledge, regularly. That ability to take risks has opened up opportunities I otherwise wouldn’t have seen. Most of that behavior was forged in the Annie Russell or the Fred Stone. Learning to fail gave me a skill set that I don’t think could have been learned in a classroom.” 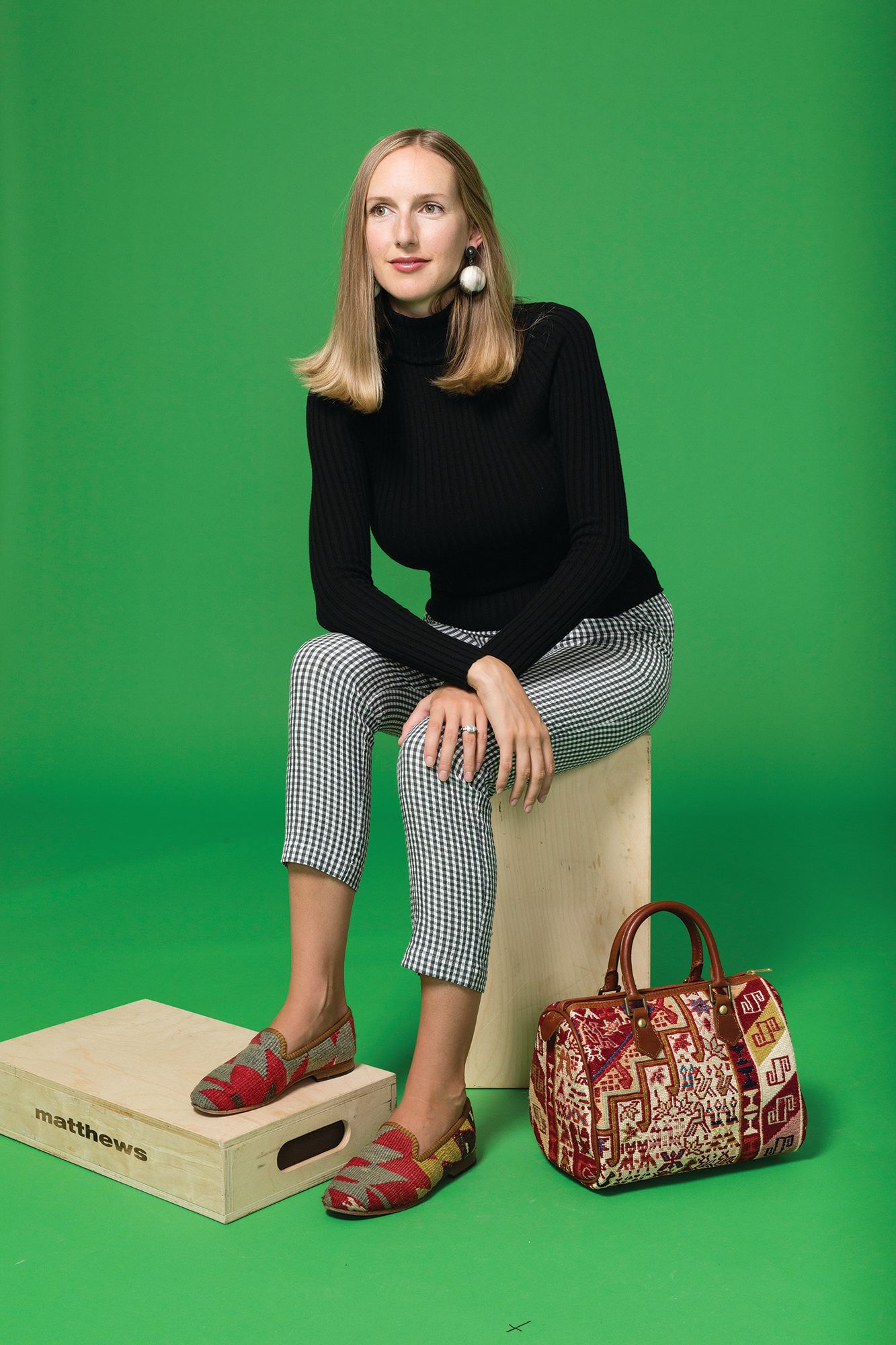 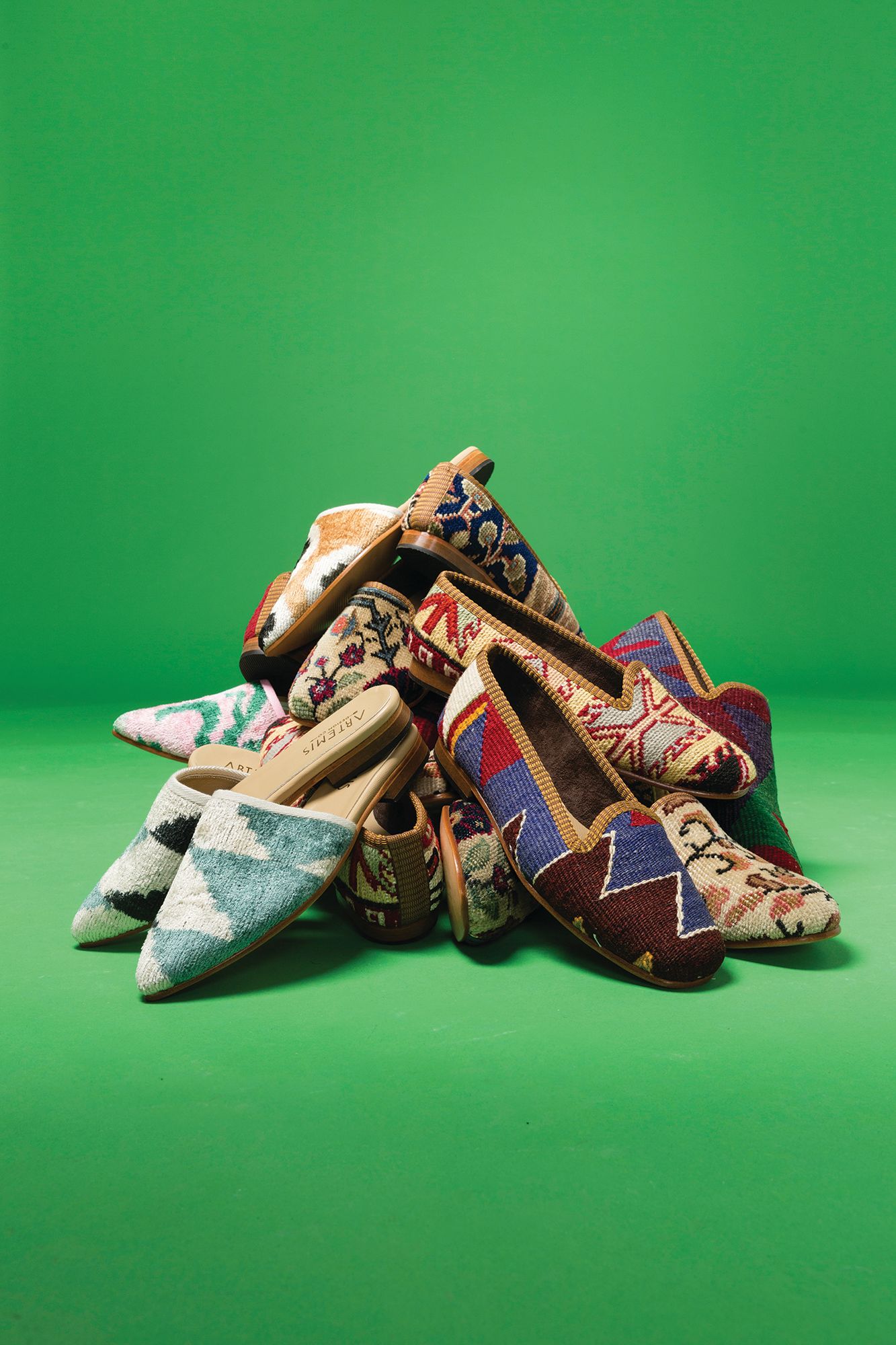 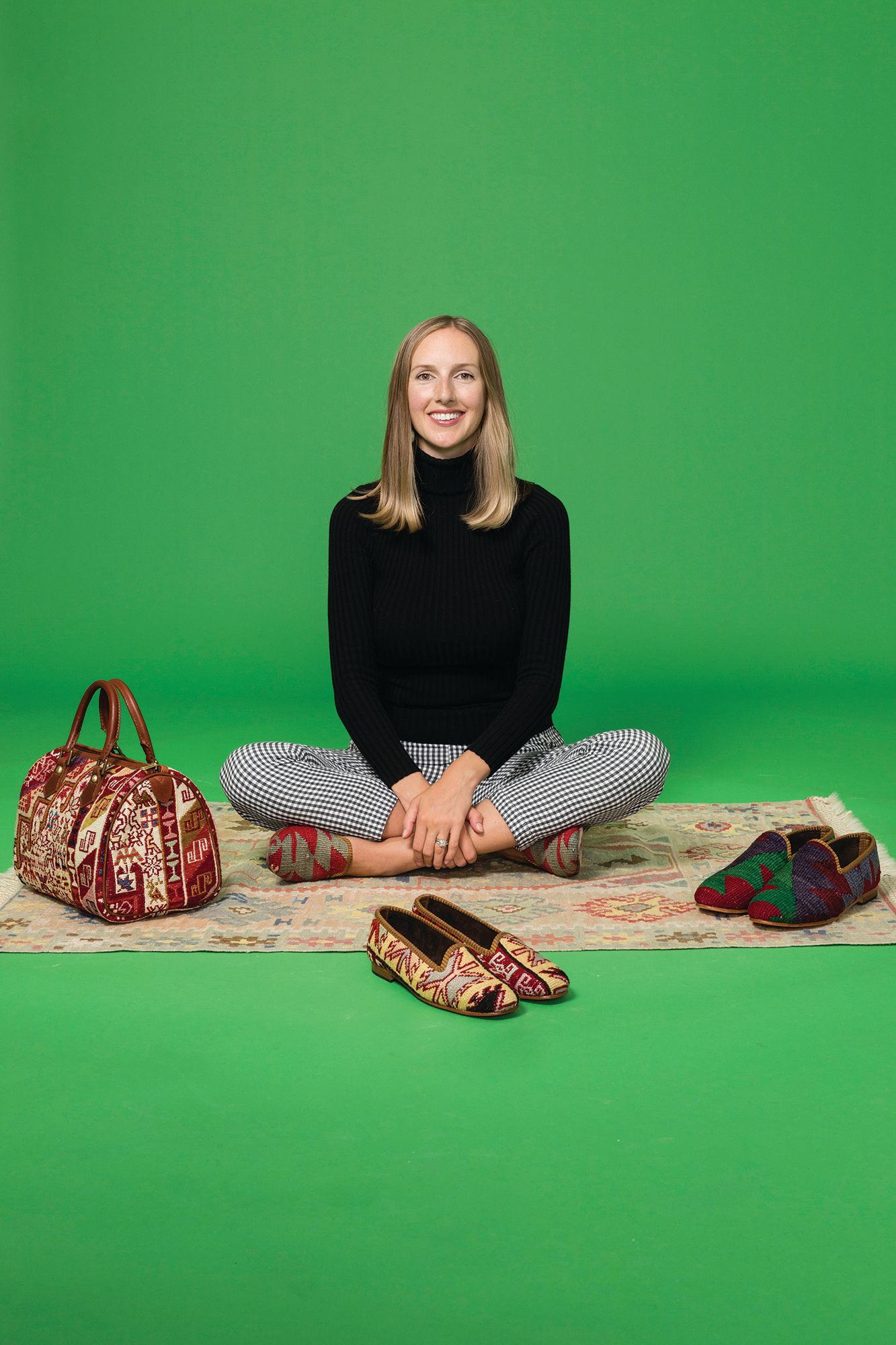 During a Rollins study abroad experience in Istanbul, Milicent Armstrong ’09 fell in love with Turkish textiles and how they could be repurposed into shoes and accessories.

A few years after graduation, her first collection was picked up by renowned retailer Steven Alan and gained the attention of The Wall Street Journal, Town & Country, Esquire, and interior designers the world over.

Today, Artemis Design Co. has grown to include a network of cobblers, suppliers, and manufacturers in Turkey and Morocco who produce critically acclaimed products that enjoy a devoted following in the U.S., United Kingdom, and Japan.

“Looking back on it,” says Armstrong, “I was just experimenting with an idea when I started Artemis, but it also required a certain amount of curiosity, confidence, and creativity to pursue the idea and make it a reality. Rollins and my liberal arts education helped me develop these qualities, and they have been instrumental in starting and running my business.”

Armstrong credits professor Kimberly Dennis for getting her hooked on the intricacies of art history.

“We would spend hours in her classes analyzing and treasure-hunting for all the symbolism and history in an artwork,” explains Armstrong. “That opened my eyes to the depth and beauty of it and taught me how to look for the same richness in the everyday. This has been instrumental in my branding and marketing work for Artemis in that we are always striving to weave interesting stories and cultural history into our products and brand message.”

In the classroom, courses in cultural and gender studies grew Armstrong’s understanding of the world. Away from campus, spending time abroad complemented her studies and led to an appetite for international business.

Throughout life, says Armstrong, concepts learned at Rollins have helped guide her decision-making and fostered the important social skills necessary for business relationships like teamwork, understanding, and empathy.