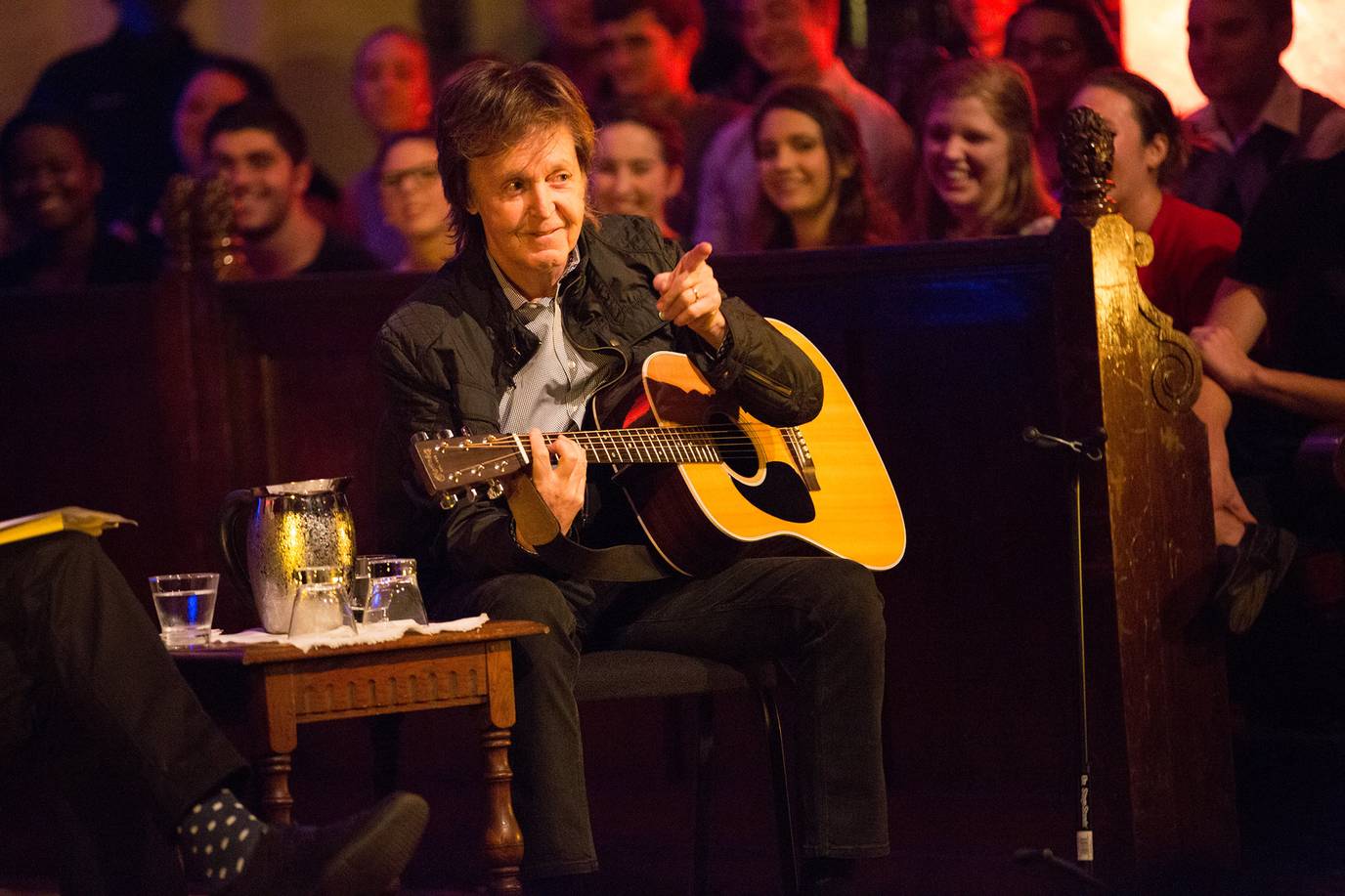 On October 23, former poet laureate Billy Collins sat down for a conversation with music legend Sir Paul McCartney with an audience of Rollins College students in Knowles Memorial Chapel.

Shantell Mitchell ’18 might have been the luckiest person in the house.

With an aisle seat in the front row—mere feet from one of the world’s most accomplished musicians—she listened as Sir Paul McCartney spoke Thursday night to a capacity audience at Knowles Memorial Chapel on the campus of Rollins College.

Kept secret until the morning of the event, McCartney’s visit prompted so much interest that students had to win tickets in a lottery system. Some 50 years after taking the nation by storm, the handsome Beatle still captures the hearts of awestruck young Americans.

“When I found out Sir Paul McCartney was coming here, I cried,” said Mitchell, an 18-year-old first-year student from Long Island. “My mom and I have a very strong love for him. Plus, my dad is 79, so I’m pretty well-versed in the age of music he grew up in.”

Sitting down for an hour-long chat with two-term U.S. poet laureate Billy Collins, senior distinguished fellow at the Rollins Winter Park Institute, the black-clad McCartney broached a variety of topics—from his earliest musical and academic influences to his dynamic song-writing sessions with John Lennon.

“I’d say, ‘It’s getting better all the time,’ and he’d say, ‘It can’t get much worse,” McCartney deadpanned, delving into how Lennon’s skepticism brought balance to their collaboration. “I would have never thought of that.”

Illustrating this point, McCartney described how his inspiration for “Yesterday” came in a dream. Certain an old melody was stuck in his head, he went around humming the tune, asking if anyone knew it. “After two weeks,” he said, “I claimed it.”

When Collins brought up how McCartney’s songs have been covered by countless bands over the years, Sir Paul expressed gratitude and likened the acts to flattery. “If someone on the street corner is reading one of your poems,” he asked Collins, “is it going to bother you?”

Growing up in Liverpool, McCartney recalled how English sailors would come back with blues and country records from places like New Orleans and New York. He also told of the excitement that accompanied learning a few jazz chords at a young age.

Asked about the Beatles’ musical evolution in the late 1960s, McCartney drew applause and laughter when he called it “a natural growing up we developed—and drugs.”

“At the beginning of the Beatles,” he said, “you’ve got to remember, we were a boy band. … It was all really fan-oriented. It’s not a bad thing, but after a while you felt like you wanted to move on.”

Dissecting their different approaches to the written word, McCartney and Collins found common ground at the intersection of lyrics and poetry. Sharing how he once read his own poems to a group of scholars in New York City, McCartney admitted “it was pretty nerve-wracking” and quite different than playing to boisterous crowds. “I had to respect the silence as a great thing,” he said.

After Collins read a few pre-written questions from students—most wanting to know if Sir Paul could hang out later—McCartney closed the night with “Blackbird,” its solemn lyrics offering quiet reflection for a grateful gathering of students, faculty and staff.

“This was a wonderful event provided through the generosity of Sir Paul McCartney,” said Rollins Acting President Craig M. McAllaster. “He wanted it to be intimate and mostly for students. That’s why they filled most of the seats. It’s a wonderful thing to have someone of his stature and significance give his time and talent to Rollins College.”