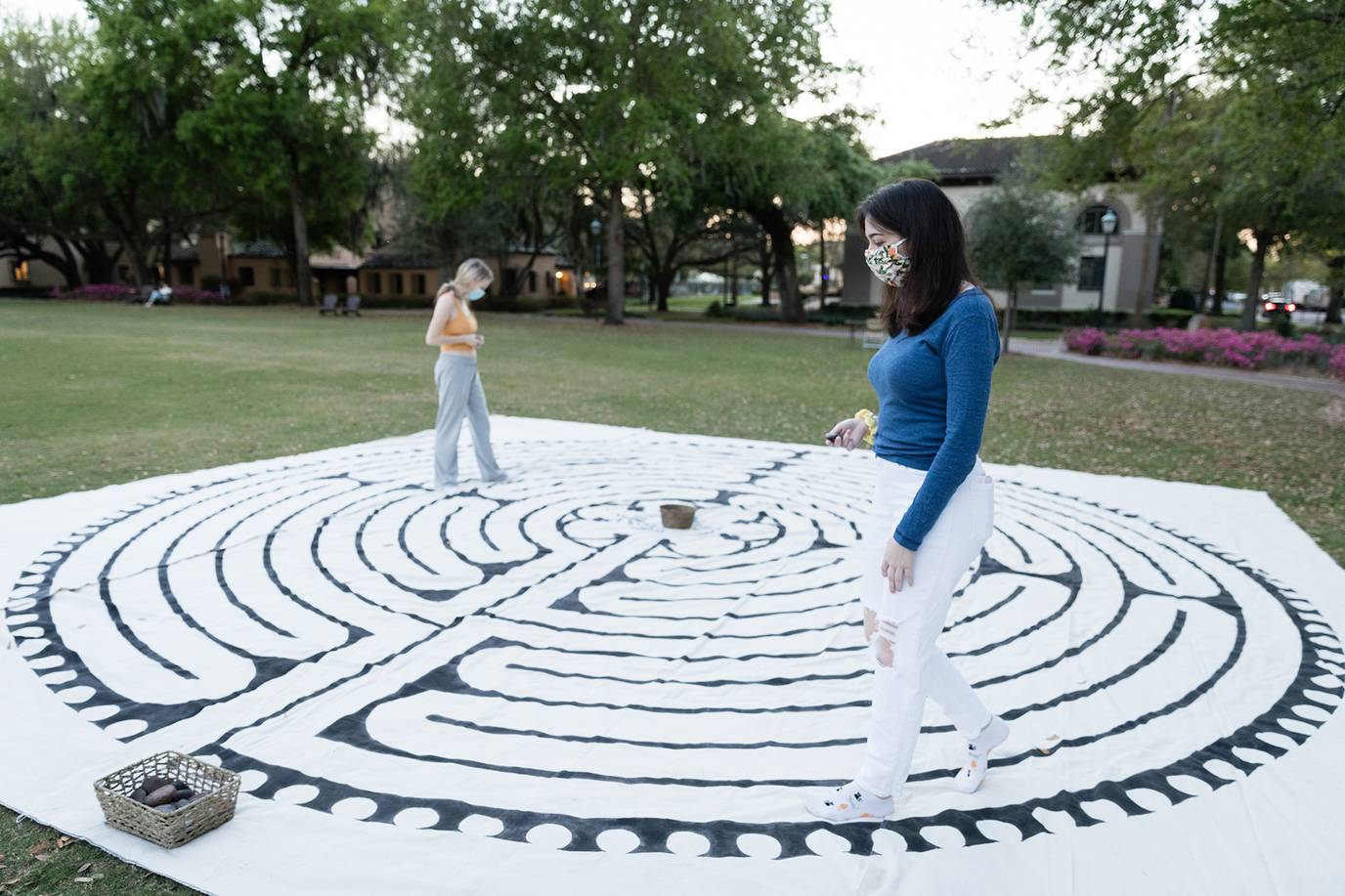 Found across cultures for at least 4,000 years, labyrinths are revered spaces at the Chartres Cathedral in France, the Amathole Mountains in South Africa, and the old summer palace in Beijing. Now the ancient tradition is finding a modern home on the Rollins campus, with completion set for early September.

Thanks to a generous donation from Victor ’73 and Jackie Zollo ’73, a beautifully paved permanent labyrinth walk and meditation garden will be a peaceful focal point of a new “neighborhood” on campus between the Knowles Memorial Chapel and the Annie Russell Theatre, situated near the new sculpture honoring Fred Rogers ’51 ’74H.

For Victor, supporting the labyrinth project honors memories of studying religion as an undergraduate with Rev. Arnold Wettstein, then Rollins’ chaplain, and his friendship of recent years with Rev. Katrina Jenkins, Rollins’ dean of religious and spiritual life and longtime supporter of labyrinth work.

“Hopefully, the labyrinth is just a continuum of how diverse the learning experience at Rollins can be,” says Zollo, the founding partner and co-CEO of investment firm DePrince, Race & Zollo, Inc. “An education has so many facets, and part of it is to be mindful of the well-lived and well-led life. That’s where inspiration and leadership comes from.”

Jenkins and Hamilton Holt School music student Frank Faine, a licensed mental health counselor and the Rollins labyrinth project coordinator, worked in close collaboration on the site plan with the facilities team, led by Director of Facilities Services for Landscape and Grounds Mary Edwards. The labyrinth has been in the works for the past three years—from concepts for programming to choosing the pattern of pavers and the serene landscaping that would surround the new space, which features partial shading by camphor trees, benches, and flowering magnolia, azaleas, camellias, and roses.

“We were looking for a way that wasn’t necessarily religious to bring student communities together to walk,” says Jenkins, Rollins’ dean of religious and spiritual life, who alongside Faine spearheaded the labyrinth project, which will be dedicated in October. “The labyrinth felt like a really fitting kind of thing to do because it doesn't belong to any particular faith.”

Walking a labyrinth encourages quieting the mind and unplugging from distractions. Labyrinths follow archetypal patterns of spirals that repeat throughout nature, from the double helix of DNA to the whorl of a mollusk shell. Unlike mazes, there are no dead ends or wrong turns. When you walk a labyrinth, you spool into the center in a circuitous way, then out again. Because there are no decisions to make, the winding process of following the path can be both challenging and liberating.

Faine and Jenkins have been working to build ties with other campuses that have labyrinths or programming around one, including Flagler College, Florida State University, the University of Tampa, and the University of Central Florida. The Rollins labyrinth is one of only two Legacy Labyrinths in the world. Ohio Wesleyan University has the other, with which Rollins shares physical pavers in common as a symbol of sharing the goal of global transformation.

The practice of walking a labyrinth may appear solitary, but the experience can be powerful for bringing people together and building community. That’s why Jenkins, a labyrinth facilitator for more than a decade, has integrated labyrinths into Rollins events since 2016, and the meditative spaces have been used during orientation as well as in programming for career services and student affairs.

In March, a temporary canvas labyrinth helped mark one year of the COVID-19 pandemic with an evening of remembrance, hope, and togetherness. Labyrinth work on campus has also been featured in events to raise awareness about sexual violence and in honor of Martin Luther King Jr. Day, honoring social justice through his concept of a “beloved community” free of poverty and hate. To foster peace and healing, a memorial labyrinth walk next June will mark the sixth anniversary of the Pulse nightclub massacre.

“The labyrinth is a tool for global transformation,” says Faine. “It teaches us how to walk with intention, your personal intention, and with an intention for transforming ourselves so that we can transform the world. And I think that's really at the heart of the Rollins mission and vision.”

An ardent supporter of what he calls “labyrinth activism,” Faine has secured funding from the Labyrinth Society, where he is a board member, for both the previous labyrinth work on campus and now to help Rollins produce future programming for students, faculty, and staff. That includes labyrinth instruction to Rollins College Conference (RCC) instructors as a way for students to develop skills in mindfulness.

This semester, Jenkins will kick off her RCC course, The Journey of a Thousand Miles: Spirituality and You, with a labyrinth walk to help students find their anchor and spur connections between them as they embark on their own journeys at Rollins. Additionally, she and Faine will be offering a guided labyrinth walk to all incoming first-year students through their RCCs.