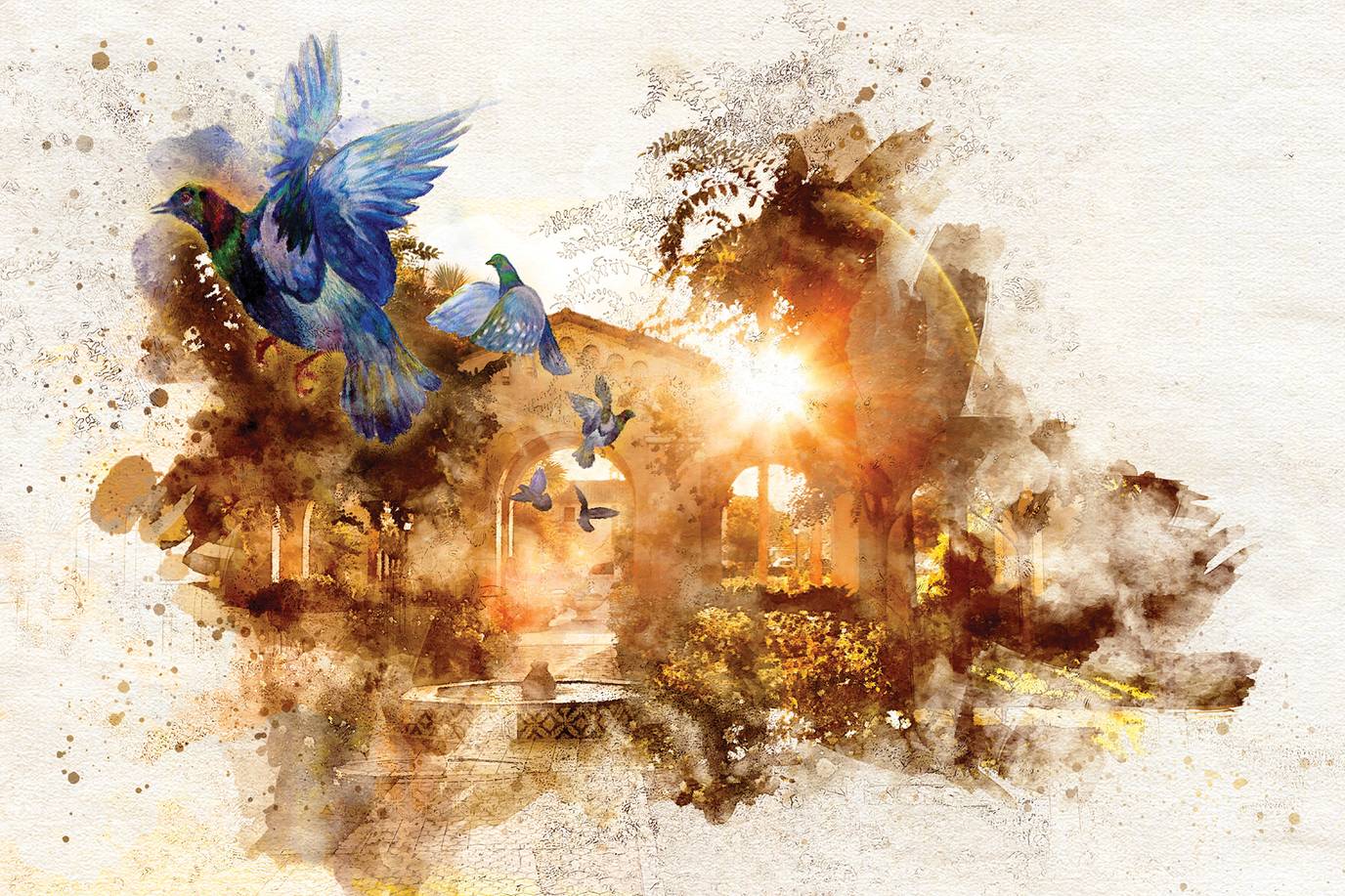 The Rollins way of doing things set these seven alumni professors up for postgraduate success—and pulled them back to teach.

One of Raghabendra KC ’13’s favorite childhood memories is of his mother on a terrace back home in Nepal. Every morning, KC’s mom would feed pigeons. She’d give them water and make sure they had shade from the harsh Asian sun. Then, she’d open a little gate and watch them fly away.

“Mom nurtured those pigeons,” says KC, “even though she knew they might eventually leave for good.”

The birds would disappear for days or weeks, or longer. But then … “some of them would come back,” says KC. “That’s how I see my own story.”

KC is part of a small flock of Rollins graduates who went on to pursue their dreams of doing elite postgraduate research or building corporate brands. They ventured away to change the world. But something, or maybe many little somethings, made them come back home to teach.

The Power of a Cup of Coffee

For one hour a day, you can usually find KC, who returned to his alma mater last fall as a marketing professor, drinking coffee with a Rollins student. They’re in Starbucks or the Bush Cafe or in his office. “Where we go depends on if I’ve just gotten paid,” says KC.

Understand, with his doctorate from Cambridge, KC could be consulting for enormous companies and making an enormous income. He has instead chosen to consult college students and buy coffee on a budget.

“When I first came to Rollins from Nepal, it was to escape an environment of poverty,” he says. “I barely spoke English, but in my first week I felt an immediate connection—to students and to faculty. I didn’t expect that.”

He rattles off the names of professors who became trusted friends. Zeynep Teymuroglu. “She found a conference for me to attend as an undergrad, and five years later she spent two hours on the phone preparing me to interview for this job. Who does that?”

Jay Yellen. “He gave me my only B, but he did it in a way that influenced my career choice.”

Richard Lewin. “He took a real interest in my next steps after graduation … even though I never had a class with him.”

The influence of these professors-mentors-friends is why they are now KC’s colleagues. “I want to be that kind of influence for others,” he says before excusing himself. A student is waiting for his coffee.

The Power of an Oak Table

The students in Paul Reich ’97’s English classes are taken off guard when he candidly shares his personal history. Growing up 10 miles from the Rollins campus. Having no interest in attending Rollins as a high-school senior. Enrolling at a big state school—and unenrolling a few months later with the stain of academic probation.

“You don’t expect to hear that from a professor,” says Reich. “But Rollins gave me a second chance. Here, you can’t disappear in the back of a huge class and zone out. My professors kept me engaged.”

Reich shares this while sitting around the same oval oak table that changed his life more than 20 years ago. Reich uses the table the way his professors did—sitting among the students, breaking down hierarchies, everyone listening to each other.

“My professors made it known that my ideas mattered,” he says. He wanted his own English students to have the same kind of experience when he returned to Rollins after earning his master’s and PhD at Purdue. “I can make each student feel valued. For me, that oval table is a picture of why Rollins is so different.” Apparently, it’s an unforgettable picture.

“My first classes at Rollins helped me gain confidence and find my voice,” says art professor Rachel Simmons ’97. “I remember a literature class where we sat around an oval table.”

Simmons had enrolled at Rollins to pursue her passion for studio art. But the open discussions in subjects like history and philosophy and literature allowed her to connect art to a world of topics. She figured it would be more of the same when she went to graduate school at a big university in the Southeast Conference. Lines would blur between art and English, between teaching and guidance in life. Turns out, the only blur was the sight of a professor at the front of a lecture hall.

“It was a huge disappointment,” says Simmons. “Whenever I tried to have conversations about other disciplines, they’d tell me to go back to my place in art. There was no such thing as individual development.”

So, when she came back to Rollins as an art professor in 2000, she made an important design change with a 19-year-old Rachel Simmons in mind: “I swapped out a rectangular table for an oval one.”

You matter. The message carries from the classroom to coffee shops and student lounges. You matter in here and out there, in the real world.

“A lot of schools have small classes, but that doesn’t necessarily make a student feel important,” says Tonia Warnecke ’99, the George D. and Harriet W. Cornell Chair of Social Entrepreneurship. Warnecke talks about long conversations with Laura Grayson, who came to know Warnecke’s interests so well that she inspired her protégé to break new ground for the students she now teaches.

“She was so influential that I came back after getting my doctorate at Notre Dame and shaped what has become the social entrepreneurship program,” says Warnecke. “I’m not sure I could’ve done that anywhere else.”

Like her six colleagues, Warnecke wanted to pay it forward, to return the favor, to turn the table.

The Power of a First Name

Ashley Cannaday ’11, like Paul Reich, didn’t intend to enroll at Rollins. “Too close to home,” she says.

But then her high-school physics teacher took Cannaday’s class on a field trip to Rollins. More specifically, she took them to Thom Moore’s labs. This was 2007, when you couldn’t find a woman in the physics department—a teacher or a student majoring in the subject. The high-powered lasers caught Cannaday’s eye. Moore caught everything else.

“He had real conversations with the students,” she says. “He made everything interesting. And he called me Ashley.”

Moore was asking a high-school senior what she’d like to research as an undergraduate. She hadn’t even applied to Rollins, but that would change quickly.

For Nolan Kline ’08, the attachment to Rollins started before he even stepped foot on campus. As a high-school senior in the Detroit area, he took an online virtual tour of Rollins and was drawn to the lake and the canopy of trees. Most attractive, though, was the acceptance letter he received a few weeks later.

“A personal handwritten note welcoming me by name,” says Kline. “That was my first real taste of the Rollins ethos.”

Kline ate it up for four years. Then he found out how difficult it is to adapt to another ethos. During his postgraduate work at a large state university, he taught classes 10 times bigger than those at Rollins. Of his 500 students in anthropology, he can think of only one who pursued the subject beyond the one class.

“I wanted to know the specific interests of each student,” says Kline. “But it’s hard to do at a bigger school.”

“It isn’t just about anthropology,” says Kline. “It’s tying anthropology to criminal justice or to health care or to business, to you, just like my professors did.”

Jamey Ray ’06 had established a foothold and a long list of impressive contacts on Broadway after earning his master’s from NYU. For a music professional, it doesn’t get any better than living and working in the City of Dreams. But after casually catching up with his Rollins mentors during a visit to Florida, Ray received a text out of the blue: “Would you be interested in teaching here?”

The fall 2010 semester would start in 10 days. Ray thought it might be a good move for stability, and he’d be teaching alongside the same people who inspired him as a student. So he retrieved his belongings from a New York apartment, came back to Winter Park, and prepared his first syllabi on a couch.

“I’d never considered teaching until then,” he says, “but it became far more meaningful than I expected. I could inspire students to pursue their passions, just as my mentors had done for me. And I could give them professional direction based on my experiences.”

And how about Cannaday? She got away from Central Florida when she started her PhD at the University of Rochester. She arrived there with her degree in physics and a reference from Thom Moore, who also earned a PhD from Rochester.

The Power of a Rear-View Mirror

Kline vividly remembers the day in 2008 when he packed his car and slowly drove away until the beautiful oak canopy was in his rear-view mirror—the last senior to leave campus. “It was the hardest thing I ever had to do,” he says. “I had wild thoughts that maybe I’d come back, but didn’t think it would be likely.”

Warnecke had two thoughts on the flight to Orlando for her job interview at her alma mater: “This will either be really cool or really weird.” When she arrived on campus, several of her former professors took time off to listen to her presentation. “It reminded me how important relationships are at Rollins.”

Reich is a writer. But even he says, “I never would have imagined writing this kind of story 20 years ago. I’m raising my daughter in the town where I grew up. I’m teaching at the school that means so much to me personally. It sounds cliché, but it’s a dream story.”

Returning to Rollins meant so much to Simmons that she moved on campus for four years as a way of giving back. But there was an ulterior motive. “It gave my daughter a close-up look at student life.” Her daughter has decided to enroll at Rollins when she graduates from high school in two years.

For Ray, New York City is impossible to ignore. Unlike the first time he moved there on whims and wishes, he has robust connections and a place to live right in the thick of the buzz … if he wants. “I could have gone back anytime in the past eight years, but it isn’t even on my radar.”

When it’s suggested that professors at other colleges care about students, Cannaday says, “Maybe. But let me tell you something that I never knew as a student. During staff meetings, the professors aren’t talking about personal research or being published. We’re talking about what we can do for each student, by name.”

As for KC, he saves the nostalgia for evening walks along Lake Virginia with his wife. His reason for spurning power and wealth in the business world for a return to Rollins: How many lives can I really impact?

“If I have a total of 60 students in my classes, think how many marks each one can make on others,” says KC. “Where else can you have that kind of impact on the world?”

Nowhere, it seems, but home.