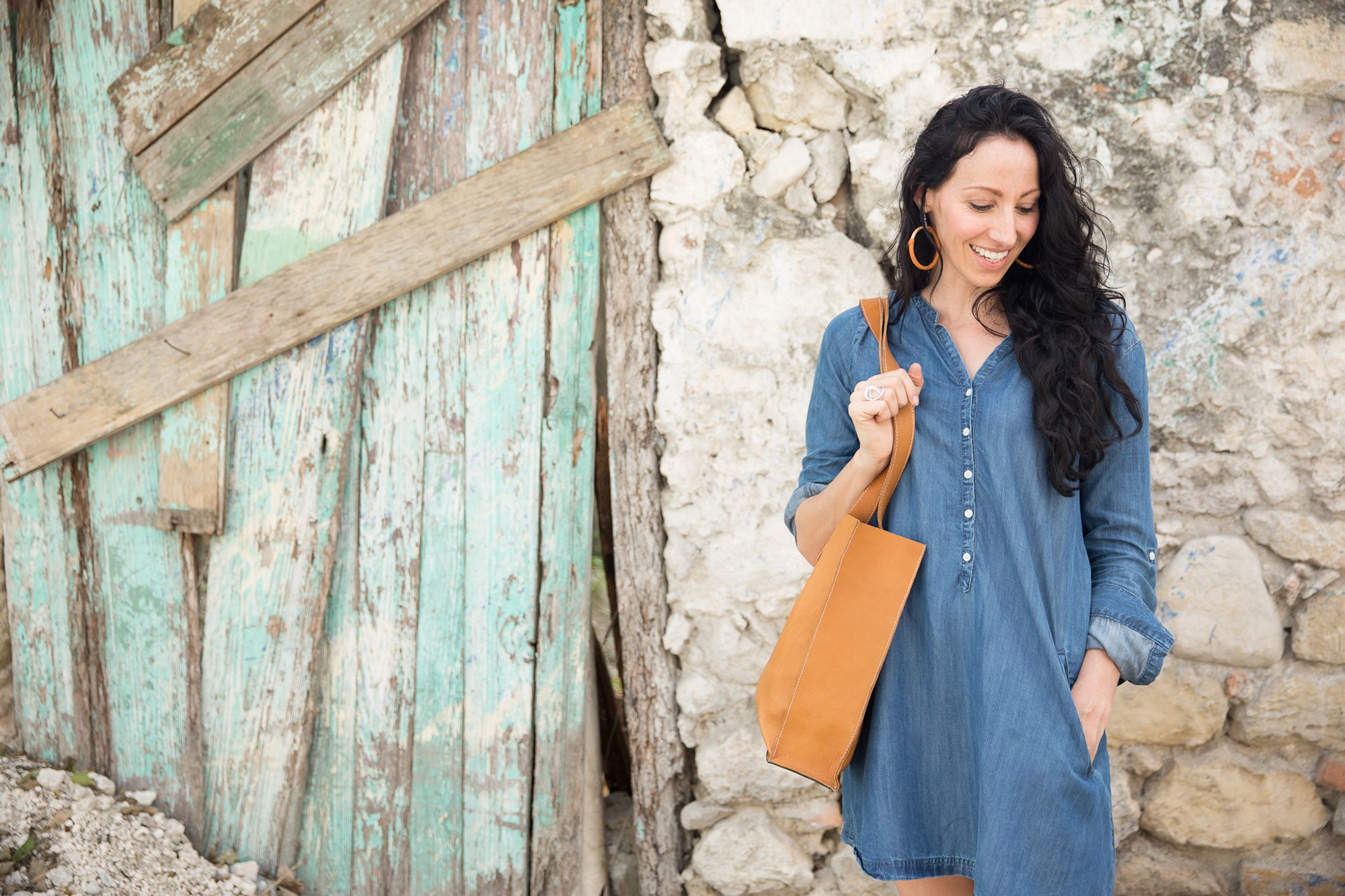 When the founder and CEO of a sustainable fashion company needed a spark, she knew it was time to pursue her MBA at Rollins.

Thirteen days after the deadliest earthquake in Haiti’s history, Julie Colombino ’18MBA stepped off a plane and onto the broken tarmac of Toussaint Louverture International Airport.

It was January 25, 2010, and Port-au-Prince’s burned-out, rubble-filled sea of chaos petrified her.

Despite being a trained natural disaster responder who served post-Katrina with the Red Cross in New Orleans, this was unchartered territory. Against the advice of friends and family, Colombino had hopped the first flight to Haiti’s capital without the support of an organized relief group.

Navigating her way through a maze of dark, flattened streets, she and two men from Orlando arrived at what once stood as the home of their host. That night, the worshipping of Haitian women mixed with the sounds of dogs barking and people screaming in pain.

“It was an incredible combination of misery and hope, all mashed into a single experience,” recalled Colombino in a TED Talk at her alma mater, Florida International University. “I was not prepared for this.”

While volunteering in a giant tent camp a few weeks after the earthquake, she had an encounter that set her on a new mission. “White lady,” a woman told her, “I don’t want any water, but I need a job.”

Colombino went back to the U.S., quit her job as manager of community participation at Heart of Florida United Way, sold her house, and moved to Haiti.

She returned with $7,000 and a better tent, but no real plan to help Haitians find meaningful work. She never could track down that woman from the tent camp, but she did meet Jolina Auguste, founder of a nearby orphanage for children whose parents died in the earthquake.

“Julie,” her new friend asked, “how will I continue to feed these kids without a paycheck?”

Colombino thought back to her time in Malawi and told Auguste how people in the African country made and sold sandals from tires they found in the streets. Neither one of them had any background in footwear, but Auguste knew how to sew and used to work in a factory—and plenty of discarded tires were lying around Port-au-Prince, destined to be burned.

Soon, the pair had fashioned a small workspace out of a tarp and some plywood. They started by cutting tires with razor blades and, 10 months later, developed a prototype sandal that, admittedly, wasn’t the most comfortable or fashionable. But people bought their product anyway, and it kept getting better over time.

That was the beginning of REBUILD globally, a nonprofit that fights poverty in Haiti through education and job-training programs. Today, each REBUILD graduate transitions into dignified employment with what’s grown to become the organization’s chic, for-profit, ethical fashion business deux mains (“two hands” in French).

In addition to earning more than double Haiti’s minimum wage, workers at deux mains have access to maternity leave, health insurance, paid vacation, and a path to become financial shareholders. Each paycheck supports nine people in the community, and many employees are now property owners. Some even teamed up to build a school.

Growing a two-woman, Haitian-based social enterprise into a global, 44-person brand—one with a shoe line by Kenneth Cole, nonetheless—comes with a unique set of challenges.

During one particularly bad stretch, for instance, REBUILD’s workshop was rendered powerless after being burglarized and hit by a flood. To top it off, Colombino’s car caught fire and she came down with dengue fever.

Still, in the Haitian spirit, she and Auguste pressed on. But Colombino knew something had to change.

Overwhelmed and nearing burnout, her rejuvenation came in part from the wisdom of Peter McAlindon, an accomplished industrial engineer and venture capitalist she had met in Orlando. McAlindon, who is now entrepreneur-in-residence at Rollins’ Crummer Graduate School of Business and a member of Rebuild’s board of directors, urged Colombino to go back to school or find somebody to help run the business.

“At that point,” she says, “it was just about learning survival techniques. We were no longer a post-earthquake disaster zone—we were now talking about innovative sustainability. It’s very difficult to do business in Haiti. I’d watched factories open and shut all day long with celebrity backing and millions in investment, and I didn’t want that to be us.”

In August 2016, Colombino—a former participant in the Rollins Business Accelerator who held a master’s in nonprofit management from UCF—entered Crummer with a full ride on the Martin Bell Scholarship for nonprofit leaders.

“It happens with most entrepreneurs,” explains McAlindon. “You’ve got a great idea, it’s beginning to take form, but you’ve got to wrap structure around it and run it like it’s a for-profit business because otherwise it’s tough to get it to grow. You’ve got the tiger by the tail, but you’re still trying to figure out the market, raise money, develop a culture, get people on board, and so on.”

Crummer provided Colombino the perfect forum to strategically address all these issues—and many others—while still serving as CEO from REBUILD’s Orlando headquarters. Back in Port-au-Prince, Auguste worked as deux mains’ HR manager and director of Haiti sales.

“Throughout the MBA program, I’d take lessons learned from the classroom and could immediately apply them to the business,” says Colombino, noting how a trip to Costa Rica led her to implement new sustainability techniques in Haiti. “It’s all so applicable. There wasn’t one class where I didn’t grow as a person or a professional.”

Apart from equipping Colombino with next-level skills for growing her business, Rollins has supplied a talent pipeline for REBUILD and deux mains.

Isabel Walker ’11 ’15MBA started at REBUILD as the company’s first-ever social media intern a month after graduating with an MBA from Rollins’ Graduate School of Business. She quickly rose through the ranks, next serving as communications manager and then as director of impact partnerships. This past August, Walker was named director of admission at the Watson Institute, an education startup helping social entrepreneurs like Colombino launch their own ventures.

“I’m fortunate to have worked for a company that was invested in my personal and professional growth,” says Walker, who majored in economics at Rollins. “Julie’s leadership and vision is to find a sustainable solution to end global poverty, and that passion trickles down to her team. She’s built this global organization that’s truly making a difference.”

Thais Cuachio ’16 turned an internship at REBUILD during her senior year into a brand-merchandising manager position at deux mains a month after graduation. The environmental studies and sustainable urbanism major is now REBUILD’s sustainability specialist.

“Julie sets a goal and gets a team of other crazy-passionate people to help her go for it,” says Cuachio. “She’s humble enough to admit mistakes, but she’s resilient enough never to stop dreaming while inspiring others to do the same.”

“Rollins really is cultivating some incredibly talented graduates, and I’m lucky to have had two of them,” she says. “We always talk about job creation in Haiti, but I’m glad we can do the same in Central Florida.”

What the Future Holds

After graduating in May, Colombino returned full force to a company that’s growing stronger by the day.

In January, deux mains will open a new solar-powered factory in the Haitian capital. The facility—which Colombino calls “one of the most innovative social-impact factories in Port-au-Prince that combines industrial manufacturing with artisanal craftsmanship”—will be 11 times larger than deux mains’ current factory space and will create 15 new jobs for program graduates this year alone.

All told over eight years, REBUILD has recycled more than 10,000 tires, employed 100 people, and invested more than $1 million in the Haitian economy. But perhaps the most intriguing development centers on scaling the concept to include other regions, or even countries.

Take, for example, the Fonds Bayard refugee camp on Haiti’s lush, mountainous border with the Dominican Republic. There, in partnership with the United Nations, REBUILD recently expanded its operation by outsourcing part of deux mains’ sandal-making process. The result has impacted hundreds of displaced Haitians through life-changing education and employment opportunities.

“This can be taken to any country that has people who want to improve their lives,” says McAlindon of the business model. “It could even work in cities here in the United States. You give people an opportunity, and they will definitely rise to the occasion.”

Regardless of what’s next for REBUILD and deux mains, Colombino plans to keep following the simple formula that got her to this point: Listen. Learn. Start small. Grow slowly.

“I want God to be proud of me,” she says when asked about the source of her motivation, “so I try to treat people the way I would if God were standing right next to me.”

For anyone wanting to fight global poverty through social entrepreneurship, Colombino offers this advice: “Stay true to what you believe. We’re talking about huge global problems without a simple answer, so perseverance can’t be a buzzword. It has to be engraved in your soul.”

Or, depending where you work, engraved in your sole.