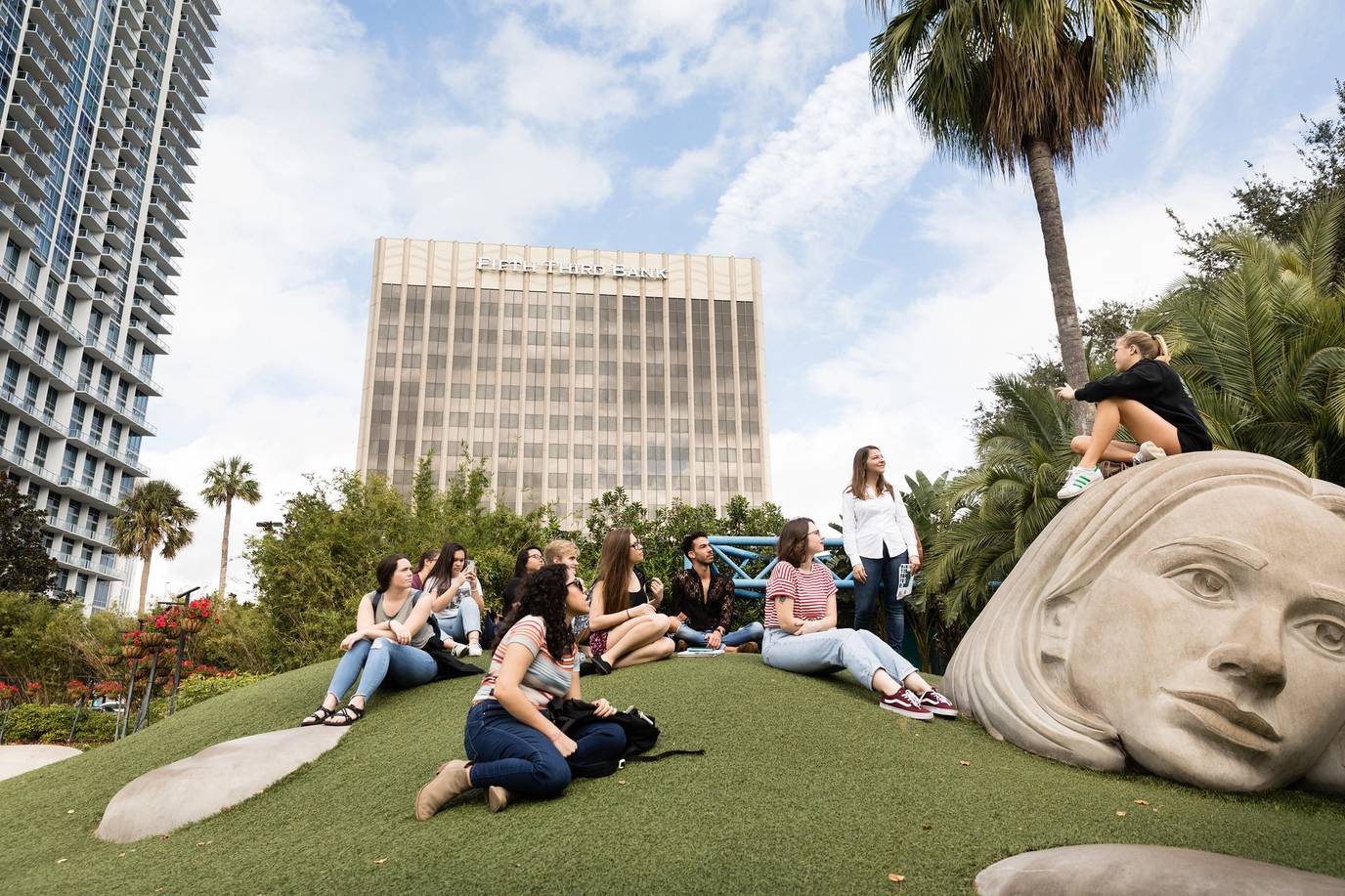 Many of our industrious students cut their winter breaks short to participate in Intersession, a weeklong course dedicated to an intriguing topic not typically covered during the regular semester.

During the week before spring semester kicks off, students have the chance to explore one topic that often takes them outside the classroom and into the community. This hands-on approach to learning real life lessons is an invaluable part of our students’ liberal arts education—one that will prove indispensable as they move forward after Rollins as leaders and changemakers.

Gabriel Barreneche, associate dean of advising and professor of Spanish

Recipients of the College’s most prestigious scholarship programs, the Alfond Scholars and Bonner Leaders participated in this Immersion Intersession course, ticking two big boxes in the liberal arts education here at Rollins.

Funded by proceeds from The Alfond Inn at Rollins, the Alfond Scholars are entering first-year students who have displayed the desire and commitment to pursue additional distinguished recognition as undergrads. The Bonner Leaders Program, a national philanthropic organization, bestows scholarship on those students passionate about service work with local nonprofits.

The group of scholars traveled to Apopka—just 40 minutes northwest of Winter Park—to visit the Farmworker Association of Florida and the Hope CommUnity Center, engaging with community members and learning about their important work with immigrants and farmworkers.

“An experience like this is at the core of our mission to educate students for global citizenship and responsible leadership,” says Barreneche. “The experience is also reflective of the Rollins liberal arts approach to education: forcing them to wrestle with a global issue from multiple perspectives.”

Barreneche explains how the students considered political implications of immigration policy along with the economic impacts of immigration and why farmworkers in Florida have lobbied corporate supermarket chains to raise the price of tomatoes one cent per pound. The students also took a public-health perspective and examined the impact of pesticides on this community as well as the environmental and biological consequences of these farming practices.

All of that may seem rather lofty given the time frame of just one week, but when the students got out in the field, pulling weeds from endless rows of mustard greens alongside farmworkers who’ve left their families behind in Mexico and Honduras, listening to stories of struggle and triumph, the learning set in at lightning speed. It was real, organic, and most importantly, galvanizing.

“I now have a real understanding of my privilege,” says Konner Ross ’20. “This trip ignited in me a passion for serving this community, which I want to do with an open mind and open heart.”

Raul Tavarez Ramirez liked getting out of his Rollins bubble, explaining his appreciation for this interactive experience and how it relates to Rollins’ goal of educating global citizens.

“I got to see and learn about an issue so complex and severe that it seemed like it should be far away from my life and my surroundings yet is just a 40-minute drive from campus,” says Ramirez. “This Immersion took us out of our comfort zones, put us in difficult positions by making us experience the issue personally, showed us that the issue is not exclusive to this community, and then provided us with tools and ideas to empower us toward taking action against the problem.”

“Listening to the stories of two women at the Hope CommUnity Center was so emotional,” says Ross. He continues by explaining how one of the women applied for DACA and received it, and the other one didn’t. The one who had received it looked at the other and said, ‘If I could, I would give my DACA to you.’

“All around the room tears were being shed,” says Ross. “It was amazing to see these women who have been through so much continue to fight. Their hope isn’t a false sense of security; their hope turns into action, and it’s inspiring.”

“I couldn’t believe how many of the students were willing to engage in difficult conversations about our immigration system,” says Clark. “Many of them could relate to the stories of migration and expressed gratitude for the sacrifices their parents had made to give them a better life.”

The Truth About Fake News

Never has it been more important to teach the next generation of leaders how to identify fake news and understand the psychology driving the demand for it. This course examines why fake news is a salient contemporary issue, what makes news legitimate or not, the consequences of the spread of fake news, and the tensions between fake news and the first amendment.

“The news media are no longer viewed as independent journalists practicing their traditional watchdog role,” says Painter, “but are now seen as just another player on the Washington power scene with their own agenda and motivations.”

Painter emphasizes the consequences of this, adding that fake news polarizes our society because it feeds people’s belief that the opposition is evil. “This polarization and demonization of the opposition results in officials’ inability to compromise and thus, the inability of our government to function,” he says.

When consuming news, it’s essential to see if it passes the appropriately named CRAPP test, which measures currency, relevance, authority, appropriateness, and purpose. If the content isn’t immediately plausible, what do other sources (e.g., fact-checking websites) tell you about the claims? Does the information seem biased or contain only one-sided arguments? Does the article include verifiable references, citations, or links to credible outside sources? For the source, who are the authors and what is the date on the information? “No date means no good,” says Painter.

As long as there is demand for fake news, there will be entrepreneurs willing to supply it. “The best way to stop the spread of illegitimate news is not with confrontations and contradictory evidence,” says Painter, “but to train, especially young people, to become literate, skilled, and discriminating information consumers.”

“On the last day of class, we shared our case-study presentations, which ranged from Pizza Gate to flat-earth claims to assertions that those who drink gin-and-tonics are psychopaths,” says Holt communications major Elysse Romeo ’18. “It was shocking to see what type of stories are considered news and how they gain legitimacy through mere exposure.”

“Students are always surprised to discover that the term “fake news” is actually 125 years old,” says Painter, “and that communication scholars have used it to refer to satirical news shows like Saturday Night Live’s “Weekend Update” and infotainment like Hard Copy for 50 years.”

Orlando is an ever-growing cultural hub for the visual arts, and this Intersession class takes learning to the source. The students visited seminal art institutions around the city, including Rollins’ very own Alfond Inn, the Mennello Museum of American Art, the Morse Museum, Lake Eola, and Snap! Orlando, soaking up everything from sculptures and painting to installations and public arts spaces.

“Studying art is important because learning to ‘read’ artworks—dissecting, discussing, and comprehending how messages are conveyed through visual means—is a crucial skill in today’s image-laden world,” says Ryan. “We learn how concepts are communicated without words and how art is influenced by culture and history.”

“I chose this Intersession course because it involved community engagement,” says Matthew Weiner ’20, a business management major, “and because it’s not a class I’d usually take, which is what I love about Rollins.”

Weiner has come to love getting out of his comfort zone, expressing how surprised he was to see all the history, arts, and culture in the small town of Winter Park and how much contemporary and abstract art had taken root in Orlando overall.

Museums, galleries, and arts spaces should be gathering places that foster, support, and encourage lifelong learning, and this is what Ryan wants for her students: to become lifelong learners and critical consumers of the visual, to view art through context, whether cultural, historical, political, or religious.

Embracing different perspectives is a central piece of the overall objective at Rollins to educate global citizens, and viewing art in all forms forces a shift in mindset and prepares students for critical thought regardless of the subject matter.

“I had never studied art before,” says Weiner. “I loved finding out how there really aren’t any right or wrong answers when it comes to contemporary and abstract art,” he says. “Our discussions at the museums were some of my favorite moments because other students would ask questions about the didactics, including the medium and dates of the artwork, where I was more of an outsider and focused on the physical aspect of the pieces.”

“I had such a mix of majors and class standings—from first-years to seniors, from mathematics and economics to business and communications,” says Ryan. “I was surprised by how eagerly the students, regardless of age or major, absorbed concepts introduced in class and saw them in action at the artistic institutions we visited.”

“In class, we’d discussed how museums should be a place welcoming to all but sometimes aren’t,” says Ryan. “The students quickly offered their insight when they felt supported by each other and the artistic institution. Together, we banished the idea that museums are impenetrable, hallowed spaces and rather made them our own by investing our time, ideas, and experiences.”