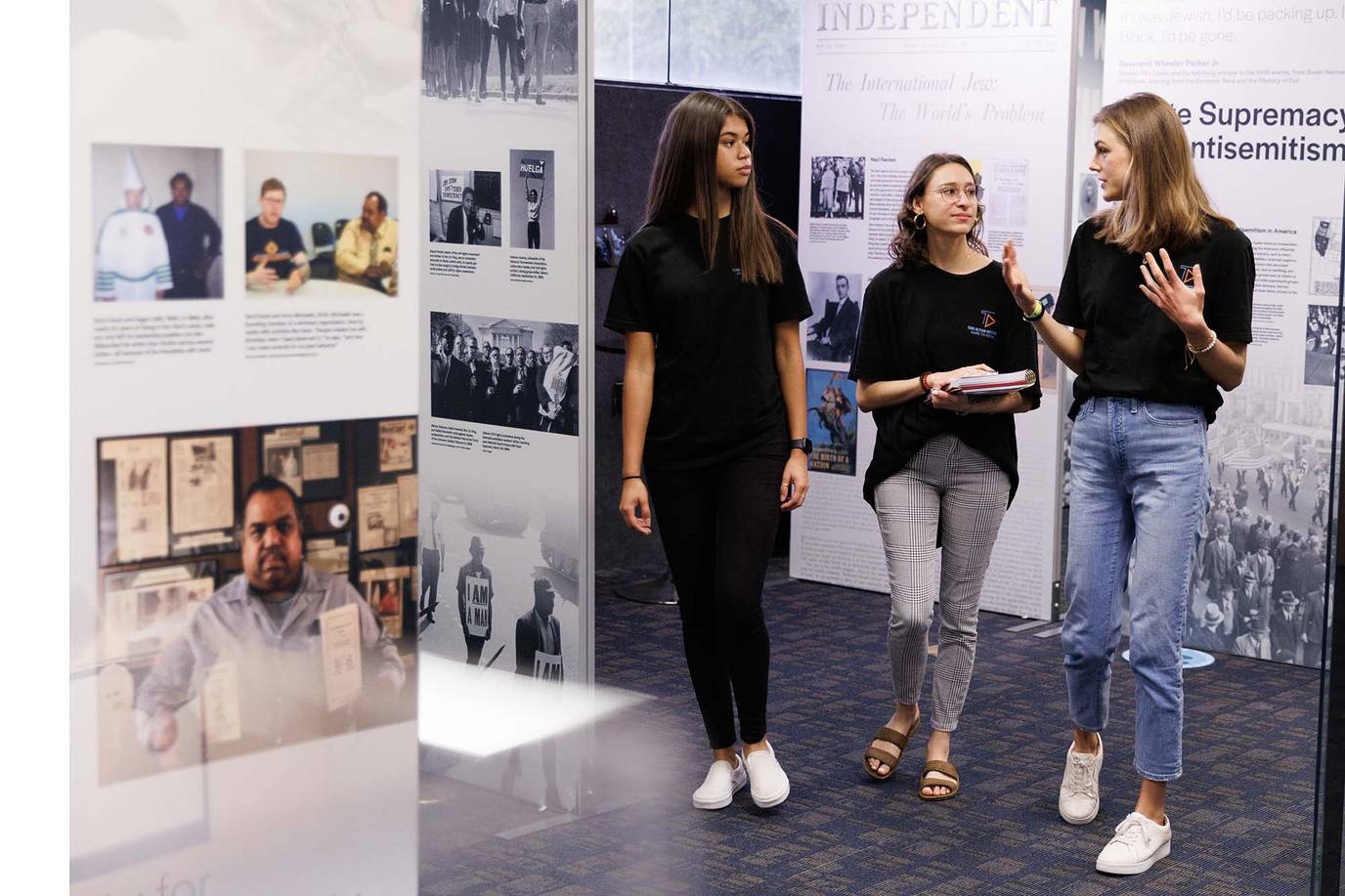 A trio of Tars are putting the “act” in “activist” through educational outreach and the creation of the first-ever Take Action Institute.

Like students across the nation, sociology major Emily Curran ’22 and religious studies major Leah Hornik ’22 were engaging in a lot of personal reflection in early 2020.

The friends and roommates had been volunteering with the Holocaust Memorial Resource & Education Center (HMREC) as part of the Bonner Leaders Program, which pairs service-minded scholars with local nonprofits. As the country grappled with a long-overdue racial reckoning while simultaneously adjusting to the new normal of living through a once-in-a-lifetime pandemic, the political atmosphere was charged, and the moment was ripe for activism.

“I remember sitting in a Zoom meeting with Emily and HMREC’s director of operations,” recalls Hornik, a political activist who has worked with Florida state house representative Anna Eskamani and Winter Park mayor Phil Anderson. “We knew that students in Florida needed resources, but we all felt strongly that the resources needed to have an immediate impact that young people could apply in the moment.”

Meanwhile, HMREC was poised to break ground on an all-new 40,000-square-foot facility in the heart of downtown Orlando. The directors were looking for ways to scale the programming to the new space and renew the mission to fight oppression in all forms. More than anything, they wanted the expansion to reach Florida’s youth, to invigorate a new generation of activists and give them the tools and connections to address some of the systemic problems facing everyday citizens.

Given Curran’s and Hornik’s skills, knowledge, and contributions up to that point, the center’s directors invited them to play a key role in an exciting new venture—the Take Action Institute (TAI), connecting them to hundreds of student activists across the state and setting the stage for big impact.

“Our mission is to use the lessons of the Holocaust to take action against all forms of bigotry and prejudice,” says Curran, who will start a PhD program in sociology at the University of Pennsylvania this fall. “We provide resources and connections to effectively tackle injustice and help dismantle structures of oppression.”

In addition to providing resources to both high-school and college-aged activists looking to make a difference in their communities, the Take Action Institute offers long-term training in community engagement. Members join a cohort of young activists from all over Florida in a year-long program that offers mentorships and a plethora of resources like printed materials, interactive webinars, podcasts, and volunteer opportunities for burgeoning changemakers. Members finish out the initiative by conceiving and executing a service project in their community.

Curran is continually thinking about ways to leverage her skills for good. In August 2020, she was taking on more responsibility at HMREC, and the more she learned about the organization’s mission, the more it aligned with her passion to use sociology as a lens to parse systemic injustice.

She’d spent time volunteering with the Rollins Student Support Foundation, which provides financial support to students for resources not covered by financial aid, and she knew that the best way to make a case for funding was by demonstrating a need for resources. Luckily, she’d built a solid foundation for research practices in her classes.

“By drawing upon the research methods I was learning in my sociology classes and collaborating with the directors of HMREC, I was able to apply my skills to the work I was doing at the center,” she says. “I started by evaluating data related to the center’s programming to better determine the needs of the organization. It was really exciting to grow academically and professionally while simultaneously helping grow HMREC’s programs.”

The more Curran analyzed the data, the more apparent it became that visitors, especially those aged 16 to 25, wanted to do more than simply reflect upon the legacy of the Holocaust—they wanted to take the lessons learned and apply them to the current moment.

“That was something I saw over and over in the evaluations I was doing,” says Curran. “We were doing an excellent job meeting the needs of some of the older members of our community, specifically the Jewish members. But beyond that, our scope wasn’t advancing our mission to engage in widespread activism. And that felt really important to the center moving forward.”

For the next nine months, Curran served tirelessly as the Take Action Institute’s first-ever student chair, helping design the initial programming and plan the initiative’s inaugural conference for student leaders. She solicited support from Rollins’ Office of Student Affairs, which brought the College on as an official sponsor of TAI last year. It’s a partnership that Curran says fits perfectly with Rollins’ mission to engage with the community and one handed down from her own mentors at the College.

“Throughout this process, I relied on so many people like Bailey Clark ’11 from the Center for Leadership & Community Engagement and Micki Meyer, assistant vice president of student affairs for engagement,” says Curran. “They were able to help me navigate many of the challenges that come with working for a nonprofit.”

Around the same time that Curran and Hornik were brought into the fold, international business major Kayley Klatt ’24 invited Lisa Bachman, senior operations director at HMREC, to be a guest on her show, The Choose Kindness Podcast, which she had started a few months earlier in response to the pandemic.

“I wanted to make a difference in the lives of people who were lonely during lockdown,” says Klatt. “And I was motivated to educate people on the effects of bullying, which is something I experienced growing up and a cause that remains close to my heart.”

Klatt made such an impression that Bachman immediately invited her to join the student-led task force that was helping develop the Take Action Institute’s inaugural conference. While Curran led the charge as student-chair and Hornik used her political background to garner speakers, Klatt put her experience to work as the head of the marketing committee.

“I leaned on lessons I’d learned in Rollins’ Women in Finance program, which was a catalyst for the confidence I needed in the months that the Take Action Institute was coming together,” says Klatt. “I’m incredibly grateful to be able to turn the knowledge I’ve gained into action every day at TAI and beyond.”

Curran also drew on various leadership positions she held on campus, from her experiences through the Bonner program to extracurriculars like her position on the Rollins women’s swim team.

“Being in leadership roles at Rollins showed me the politics that come with navigating the institutional bureaucracies that guide the work we’re able to do at the Take Action Institute,” she says. “Being able to communicate effectively with staff members, board members, and community leaders in a way that was respectful and tactful but also wasn’t compromising my own personal position or viewpoints was something that Rollins had already prepared me to do.”

While the world was in the midst of change, Hornik was contemplating a change in major from international relations to religion, inspired in part by the work she was doing through HMREC. Hornik is Jewish and lived in Israel for a year before attending Rollins but says her focus was always on politics rather than history.

“In a lot of ways, my own Holocaust education started with my work at HMREC,” says Hornik. “I’ve always been interested in Middle Eastern politics—I’m minoring in Jewish studies and Middle Eastern and North African studies—and I grew up hearing about the Holocaust in synagogue. But the piece that I was missing was the action part.”

The more she worked with TAI, the more she realized that religion and politics can be linked through a common goal to serve others. What if she could blend those passions and work directly with other young people as an educator, ensuring that a new generation passes on the lessons of the previous one? Encouraged by her advisor, religion professor Yudit Greenberg, Hornik changed her major to religious studies and never looked back.

The switch led to a summer internship with the David Labkovski Project in Los Angeles, which honors the work of the famous artist and Holocaust survivor of the same name.

“When I got back from Los Angeles, I remember telling the directors at the center that I’d finally found my career path,” says Hornik, who was named lead education specialist at HMREC this past year.

In January 2021, 400 representatives from over 50 high schools and colleges from across the state converged upon the Hilton Orlando to attend the first-ever Take Action Institute Conference, where they heard from local leaders, politicians, and scholars.

“We designed the conference to provide attendees with immediate resources,” says Hornik, who worked with Pulse survivor and Equity Florida press secretary Brandon Wolf during the event. “We wanted people to walk out of the building and have the tools they need to organize right that minute.”

As Curran prepares to graduate from Rollins and start her PhD program, she’s passing the torch to Klatt, who will take over as student co-chair of TAI next year. Set to graduate in December, Hornik is continuing her work as a Holocaust educator in an effort to forge a lifetime career out of activism education.

Based on the success of its first year of programming, the Take Action Institute is ramping up its commitment to providing community resources.

“This year, we’re implementing six equity and justice-based issue networks led by student board members,” says Klatt. “The idea is for members of the institute to be able to advocate for causes that are personally meaningful on a policy level. I’m so excited to see our students turn their visions into action.”

For the trio of activists, it’s a fitting culmination to an experience that’s propelled each of them to the next step on their Rollins journeys and beyond.

“I’ve learned that there are a lot of changemakers in my generation,” says Hornik. “And we’re going to make change for years to come.”

Rollins Ranks Among Nation’s Best for Athletic and Academic Excellence

The College was recently honored with the NCAA’s Division II Presidents’ Award for Academic Excellence for achieving an academic success rate of 95 percent.