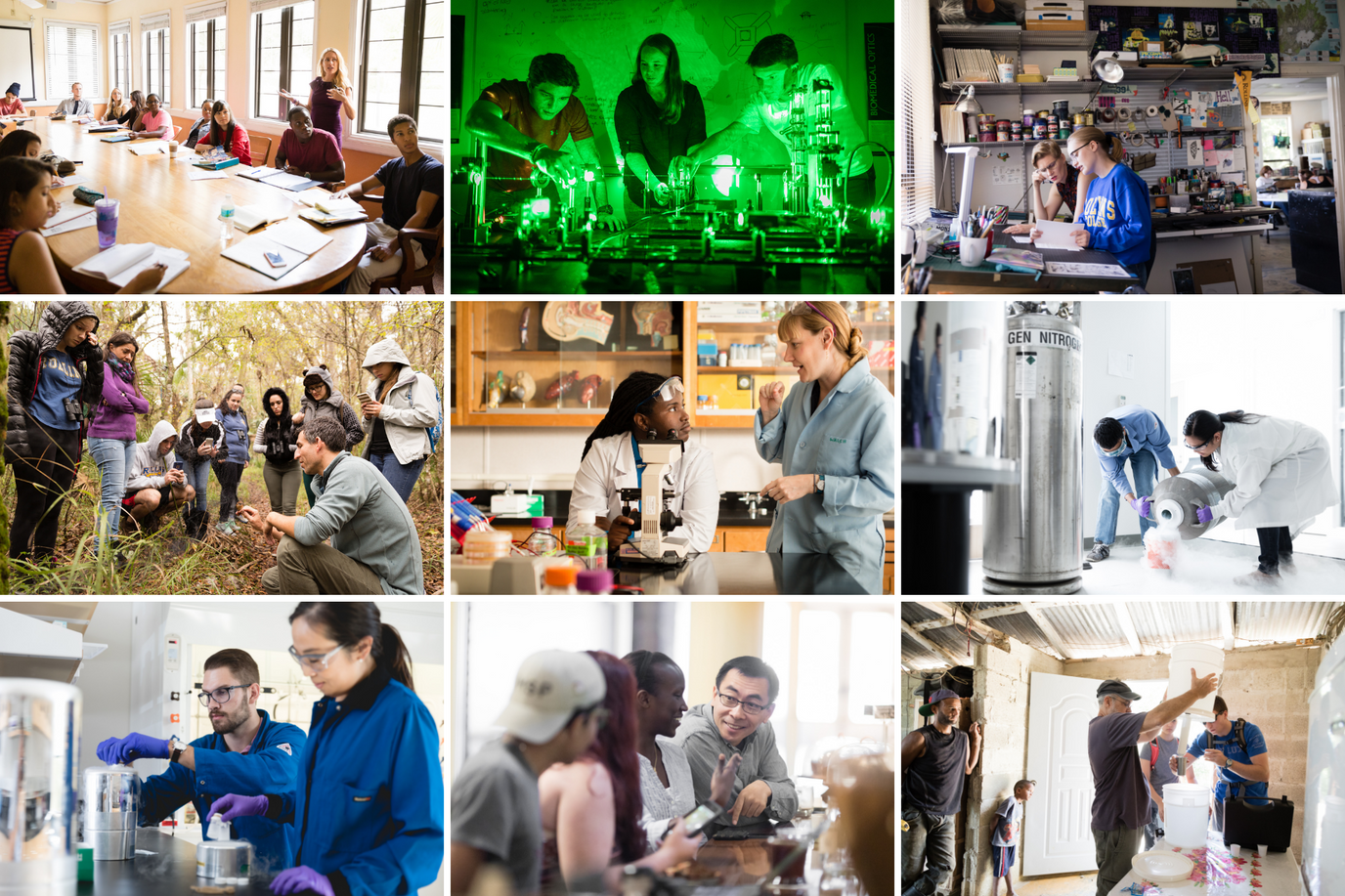 A recent report by Gallup reveals that college graduates who had a professor who cared about them as a person, made them excited about learning, and encouraged them to pursue their dreams were twice as likely to be thriving in both their lives and careers. Researchers found that having at least one mentor during college was the single most important factor to postgraduate professional and personal success.

At Rollins, you’ll find mentors at every turn—from orientation to commencement. Even before you’ve fully moved into your dorm room, you’ll have the support of Rollins’ Peer Mentors, second-, third-, and fourth-year Tars who help ensure your #RollinsLife is amazing from day one. You’ll have dedicated advisors who will help you maximize your Rollins experience, augmenting your academic experience through study abroad, community engagement, and elite internship and research opportunities. You’ll get firsthand career and life advice from like-minded alumni who went before you. Most of all, you’ll find meaningful mentors in your professors.

At Rollins, your professors aren’t detached lecturers pontificating in front of hundreds of students in overflowing auditoriums. Here, our expert faculty are true partners dedicated to helping you unlock your unique potential to make the world brighter, smarter, and more open to possibility. From enlightening discussion-based courses and original research to life-changing service projects and globetrotting field studies, go behind the scenes of the special bonds forged by our inspiring faculty and industrious students and get a sneak peek at what meaningful mentorship looks like.

Use science to help save lives

Last May, chemistry professor Pedro Bernal led Rollins students on a field study to the Dominican Republic for the 21st time. During their two weeks on island, Bernal and his students worked to reduce the incidence of water-related illness by installing household water filtration systems, testing water quality, and administering health surveys. Over the past two decades, Bernal and his students have built and installed more than 20,000 water filters in rural communities throughout the Caribbean nation.

Create a coding program that gets funded by Google

Last spring, Sam Sadeh ’18 and computer science professor Dan Myers teamed up to create an after-school program to teach elementary-school students the basics of coding. The innovative curriculum earned a grant from Google’s igniteCS initiative, which funds only about a dozen projects each year. Since securing funding, Sadeh and eight Rollins classmates have used MIT’s child-friendly Scratch software to teach students at a local high-needs school to code.

Sequence the DNA of sea stars

Last summer, marine biology major Damian Clarke ’19 and biology professor Fiona Harper partnered on a research project to sequence the DNA of sea stars. The project, which was funded through Rollins’ Student-Faculty Collaborative Scholarship Program, has the potential to lead to a breakthrough in unexplained infertility. The pair plan to publish their findings in Invertebrate Zoology by the end of the 2018-19 academic year.

To understand the economic relationship between the developed world and developing countries, students in Zhaochang Peng’s The Global Economy course create promotional strategies for local coffee shop, Downtown Credo. The direct-trade shop sources its coffee directly from growers in Guatemala and Nicaragua, then asks its customers to name their price for its assortment of beverages. Students were divided into teams and tasked with developing plans to promote one of Downtown Credo’s four coffee-shop locations.

Help build an ecolodge in the foothills of Mount Kilimanjaro

Last summer, political science professor Dan Chong led 13 students on a field study to Tanzania to learn from local communities and support community development. In Moshi, the group partnered with Better Lives development coordinator Sam Barns ’10 ’12MBA to build a kitchen and bathroom facilities for the organization’s ecolodge project, which will help bolster the local economy. In Kahe, students helped finish living facilities for teachers at a local secondary school. All the hard work was bookended by adventure. Prior to the field study, several students climbed Mount Kilimanjaro together, and the trip was capped by a three-day safari through Serengeti National Park and Ngorongoro Crater.

In spring 2016, students in history professor Julian Chambliss’ Introduction to Digital History class transcribed dozens of rare of newspaper clippings from The Advocate, an African-American newspaper published in 1890s Winter Park. The resulting Advocate Recovered website, which documents the city’s early days—especially in regard to issues of race, politics, and life in nearby Hannibal Square—won the Florida Historical Society’s Hampton Dunn Internet Award.

Create your own academic program

At Rollins, students have the freedom to pursue their passions to the fullest. For proof, look no farther than Karina Barbesino ’19, a double major in international relations and Asian studies who designed a Chinese minor with modern language professor Li Wei. Last spring, Barbesino earned a Boren Scholarship, a prestigious award reserved for students who intend to pursue careers in federal national security. Most recently, she won a Fulbright Scholarship to teach English in Taiwan.

From staging original plays at the Annie Russell Theatre to curating exhibitions at the Cornell Fine Arts Museum, Rollins student-artists are afforded myriad opportunities to hone their craft. Last December, an array of Rollins orchestras and choral ensembles under the direction of music professor John Sinclair performed a holiday concert at the Dr. Phillips Center for the Performing Arts, a state-of-the-art performance venue in downtown Orlando that hosts everything from Broadway plays to world-famous musicians.

Last spring, environmental studies professor Emily Nodine and students in her Biosphere course planted several hundred native plants along North Lake Triplet, a waterway close to campus that had been impacted by construction.

Each February, students partner with English professor Carol Frost to host Winter With the Writers, Rollins’ annual literary festival and the sole representative in the Southeast region of the National Book Awards’ on-campus program. It’s a true internship that helps students learn what it really takes to put on a national literary festival for the public. Students help with marketing, website maintenance, photography, and building an engaged social media presence for the festival. Students also work closely with authors in both workshop and classroom formats to gain a better sense of the elements of fiction, poetry, and non-fictional prose.

Craft, stage, and perform an original parody of one of the most popular TV shows of all time

During summer 2016, 12 students partnered with theatre professor David Charles to craft and stage an original, fully improvised parody of the award-winning PBS drama Downton Abbey. For two months, the students compiled research on all aspects of life in early 20th-century Great Britain to help the actors better understand the world in which they were improvising. In addition to playing 30 onstage characters, students also designed costumes and makeup and managed sound and lighting.