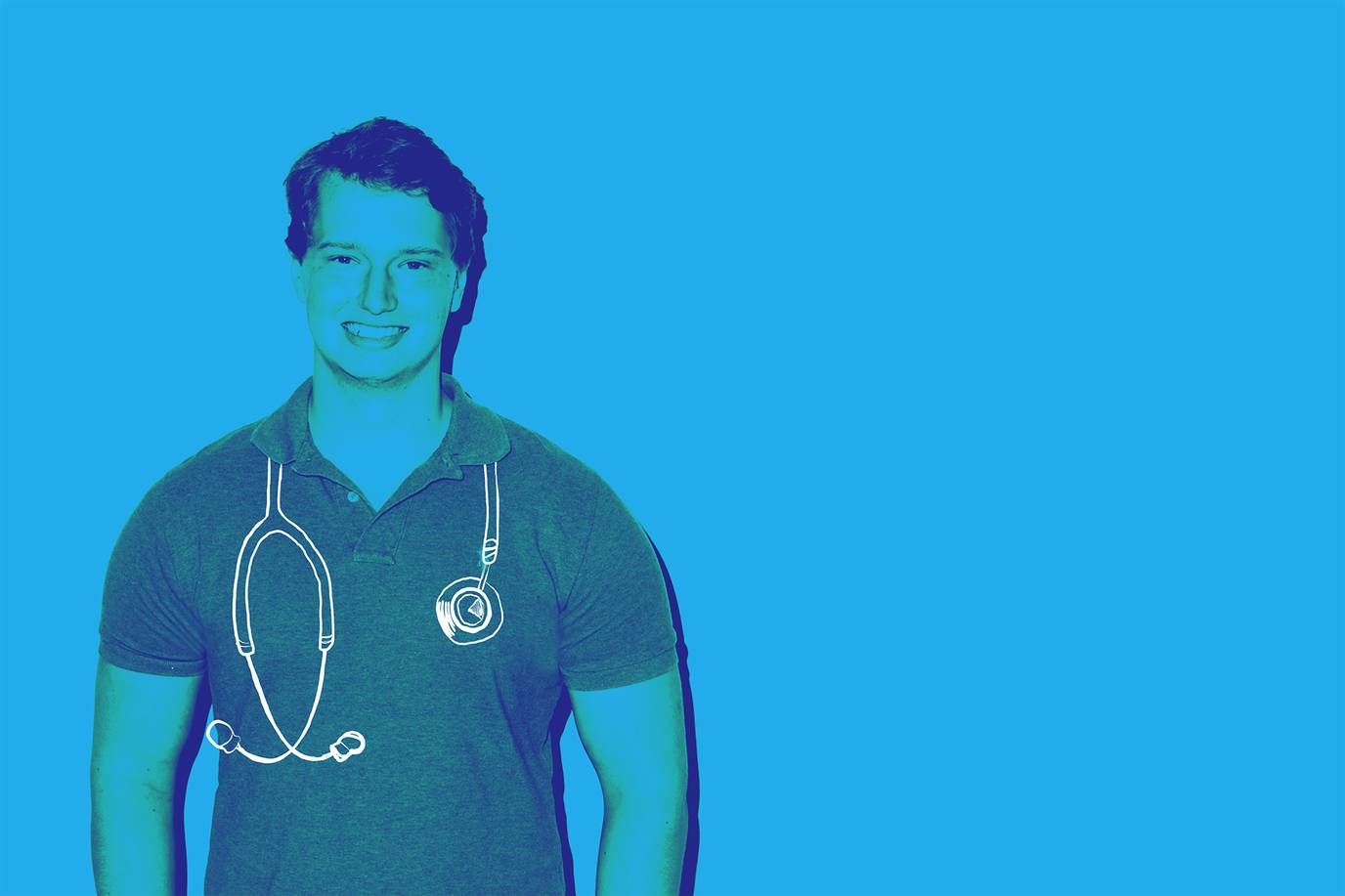 For a decade, an intensive shadowing program at AdventHealth has helped prepare Rollins undergrads for careers in medicine.

Lauryn Falcone ’13 will never forget the pregnant woman who showed up at the emergency room with a mysterious purple rash on her extremities.

What caused it? Could her baby be in danger? How about the health of others?

Doctors took every precaution and scrambled to find answers, eventually settling on a diagnosis of Neisseria meningitidis. Fortunately, this highly contagious bacterial infection was also highly treatable. After some antibiotics and a stint in the airborne isolation unit, mother and child would be OK.

“That was a real eye-opener for me, and it planted a seed,” says Falcone. “It was the first time I thought seriously about how the skin can tell us so much about the body. It was a ‘wow’ moment that made me consider this for a career.”

Falcone will start her residency in dermatology next year at West Virginia University, where she has attended the School of Medicine since summer 2013. As a candidate in the dual-degree MD/PhD program, Falcone splits her time between labs, research, and working at a branch of the National Institute of Occupational Safety and Health, studying the toxicity of welding fumes. On track to graduate in 2020, she plans to conduct clinical and translational research, with the ultimate goal of teaching in a large academic environment.

For Falcone and many students like her, the medical journey might culminate at a big hospital or university—but it all began at a small liberal arts school in Winter Park.

The Pre-Med Observership Program is the brainchild of Joseph Portoghese ’79. The son of an electronic technician at Lake Baldwin’s former Navy base, Portoghese was the first in his family to attend college. At Rollins, he majored in chemistry and pre-med before graduating from the University of South Florida College of Medicine, where he also completed his residency and surgical oncology research.

After moving back to the Orlando area in 1989, Portoghese spent 17 years in private practice and assumed various leadership positions with Florida Hospital. Today, in addition to remaining a practicing surgeon, he’s the hospital group’s chief academic officer, overseeing all residency programs.

In the mid-2000s, Portoghese began exploring ways his employer could provide opportunities for Rollins pre-med students. The result was the Pre-Med Observership Program, a partnership that allows participants to shadow doctors in a variety of specialty areas during winter intersession and spring break.

“When we started working on creating the program, I was thinking it could be year-round,” Portoghese says. “But it turned out that something shorter and more intense worked better for the students, so we just tried to adapt to what they needed. The goal is to give students a realistic idea of what med school will be like ... a little more in- depth knowledge about what they might be getting into with a medical career.”

This spring, coinciding with the 10th anniversary of the program he founded, Portoghese was recognized with a Rollins Alumni Achievement Award for his professional achievements and contributions to society.

“I live in Winter Park, and my family has deep ties to Rollins, so it was easy for me to want to give back,” he says. “Plus, at Florida Hospital, we regard helping to create motivated, altruistic health-care professionals of the highest caliber as central to our mission. So being able to give Rollins students an experience that communicates those values is really what we’re trying to do.”

The Smells, the Sensations

Brandon McNichol ’18 is a biochemistry and music performance major planning to enroll in med school, with an eye on becoming a hand surgeon.

For a week in January, he and 11 other Rollins students clocked in at Florida Hospital at 5:40 a.m., then spent up to 12-hour days making rounds with doctors and nurses in fields that included general surgery, internal medicine, emergency medicine, radiology, pediatric medicine, and osteopathic family medicine.

In McNichol’s case, a day on the job usually meant observing a gallbladder removal or hernia repair. One time, an addict using dirty needles required surgery to reduce swelling in his arm.

“Just reading a book doesn’t compare to when you’re there with a person and all the smells and sensations,” McNichol says. “It makes you think, ‘do I really want to do this?’ It helps you have a clear focus of why you’re doing it and what you’re working toward. The program really made me feel confident about going into medicine in general, about becoming a doctor.”

With experience under his belt, McNichol began volunteering once a week in the surgical department at Florida Hospital Altamonte. Every Friday, he assists with cleaning rooms, prepping patients, and performing other routine tasks, all while continuing to learn the intricacies of operating-room procedures.

“It’s hard to volunteer without prior experience,” he says, “but this is a good way to get your foot in the door. It’s really a big privilege for undergrads that Rollins offers this opportunity.”

As director of experiential learning, Norah Perez ’10 ’12MHR plays an important role in Rollins’ Center for Career & Life Planning. Part of administering the Pre-Med Observership Program means overseeing a rigorous selection process, co-leading orientation with the pre-med adviser, holding a group debrief session, and helping students maximize their résumés. Since the program’s inception, 74 students have participated—about six a year through 2015. Since then, however, the annual average has more than doubled.

“Students applying for graduate school need to amass a good level of shadowing and observership experiences in the medical field,” Perez says. “We encourage them to have already done some of this in high school, so that when they get to Rollins they are building upon that experience, along with their biology courses and pre-health curriculum.”

Perez adds that she and her colleagues have attended pre-med conferences across Florida, and when people hear about the program, “they’re pretty much in awe. They tell us it’s incredibly unique for undergrads to have this kind of hands-on opportunity in a hospital like this. Those experiences are typically reserved for grad students.”

In their daily journals and final reflection papers, students talk about what they’ve seen and learned—the conversations with patients, med students, and staff; any myths they’ve dispelled—and, perhaps most important—whether they still want to continue studying medicine.

“During orientation, we have to get students ready for what they’re going to encounter,” Perez says. “When they’re shadowing in the ER, for instance, they’re actually going to be seeing things they really have to prepare themselves for ahead of time. We tell them, every day when you go home, think about what you saw today, research it, and have questions prepared for tomorrow.”

On the Front Lines

Taking time for a quick chat between two surgeries and a patient consult in the ER, Riley Austin Schlub ’11 calls his time in the observership program a “reality check.”

“I almost feel like it should be mandatory for anyone who wants to pursue a career in the health sciences,” he says. “That was my first taste of what being an actual surgeon was going to be like.”

A third-year surgical resident at the University of South Carolina, Schlub is an aspiring plastic surgeon. For now, though, he’s taking the lead on hernia repairs and gallbladder surgeries under the watchful eye of a seasoned instructor.

Looking back, one of the most memorable aspects of the program at Florida Hospital was observing pancreatic cancer patients undergoing the Whipple procedure, a major operation in which parts of multiple organs are removed.

“These are patients with a very aggressive disease who have a very narrow window for cure,” Schlub says. “Seeing them not only in the OR but in the clinic was a very moving experience.”

An added benefit was that most of Schlub’s letters of recommendation for his general surgery residency came from Portoghese and others at the hospital with whom he had developed strong relationships.

“This program was all about putting you on the front lines,” he says. “For me, I looked at it and said, ‘Yeah, this is still what I want to do.’”

When Justine Falcone ’13 and her twin sister, the aforementioned Lauryn, arrived on campus for an impromptu visit as seniors in high school, the first thing on their minds was cross country. Both were star runners who went on to lead the Tars in many a race.

The second topic of concern surrounded academics—specifically, what opportunities existed in the way of medical studies. Within minutes, they were sitting in the office of a professor and adviser who helped seal their decision to enroll.

“I thought it was really impressive that when we showed up without an appointment, someone was available to meet with us,” says Justine, a biology major at Rollins who recently earned her PhD from the University of Florida. “Rollins was an incredible preparation for med school. With the small class sizes, I received a lot more individual attention than I would have at a bigger school, and every professor could meet with me at any time.”

During their undergrad years, the Falcone sisters did just about everything together, even splitting the title of valedictorian. So, this summer, it was a fitting reunion when Justine relocated to Morgantown to enroll in West Virginia University’s emergency medicine residency program.

“Everyone in our class is in med school or has already graduated,” Justine says. “For a really small pre-med program, I think Rollins definitely produces alumni who can compete at the highest levels. A liberal arts education, combined with a rigorous science background and practical career experiences, helped me develop a very good foundation.”

Participants in the observership program, Perez adds, are the stewards of Rollins’ reputation and legacy.

“Every year, we have an opportunity to show the physicians at Florida Hospital the quality of our education and excellence of our students,” she says. “And every year, we deliver.”