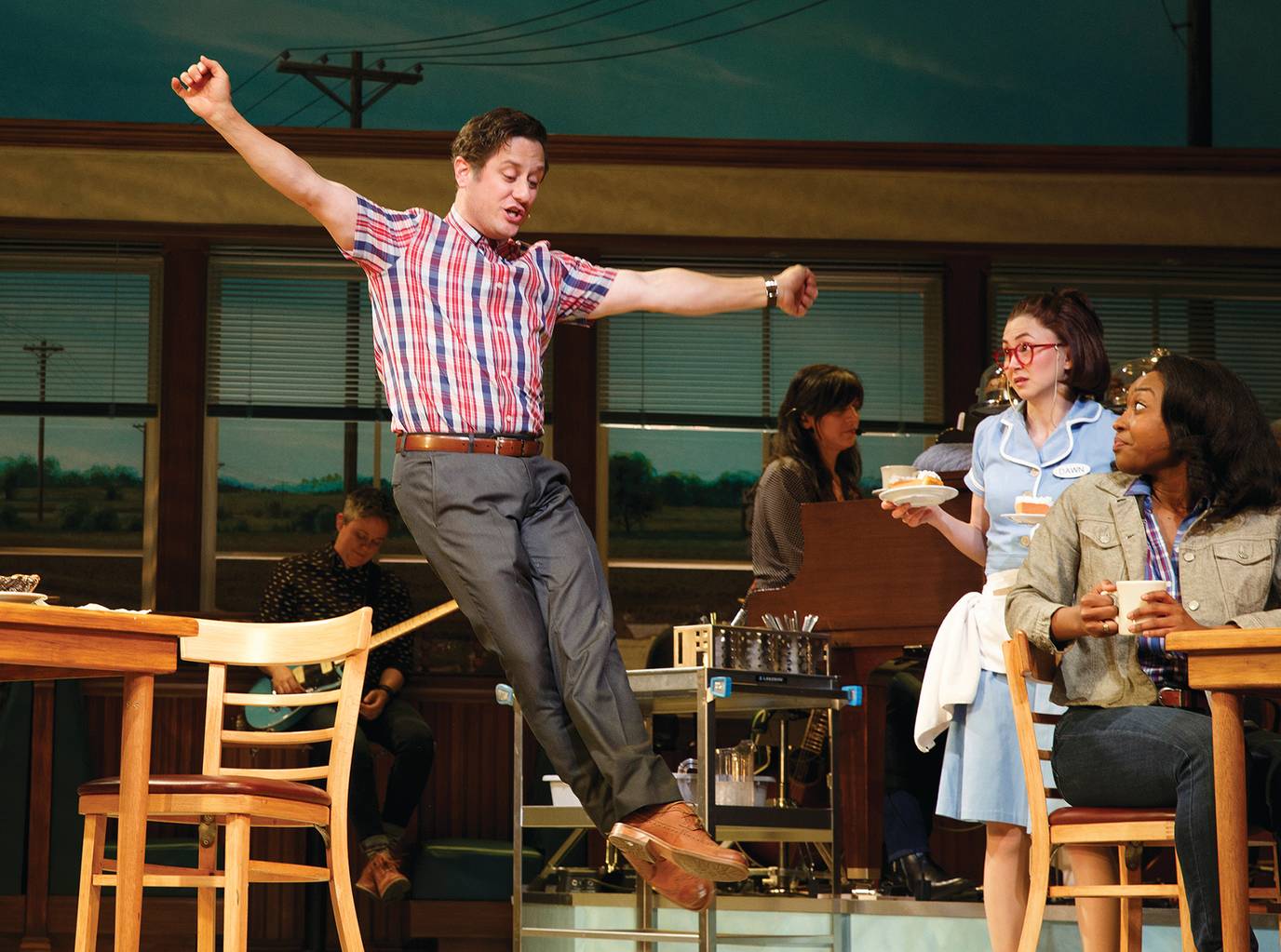 The Rollins theater alum is the first actor to play both male leads in Chicago.

Christopher Fitzgerald ’95 seems fairly at ease for someone who is making history on the Great White Way. He is doing his second turn in the long-running Broadway revival of Chicago. The first time he played the overburdened husband, Amos Hart, and in August, he took over as the fast-talking lawyer, Billy Flynn.

That makes the Rollins theatre graduate the first person contracted to play both males leads during the 18-year run of Chicago, which has set a record as the longest running musical revival in Broadway history.

Reached on a day when he had two shows to do and faced with a faulty cell phone connection, Fitzgerald might have easily asked to reschedule for another day because at the moment he was in the dressing room, trying to relax between grueling performances.

Instead of begging off, the two-time Tony Award nominee, said, “Just a minute, let me walk outside and see if I can get better reception.”

Reconnected, he resumed chatting, but not about his latest coup or his Tony nominations for roles in Young Frankenstein and Finnian’s Rainbow. He wanted to talk about how difficult, unpredictable, and fickle acting success can be. “It’s a really challenging life,” Fitzgerald says. “I’m married. I have two kids. That’s the most valuable part of my life.”

He said his family keeps him balanced because even with his success, he expects to audition and get turned down in the future. “It’s always risky to put yourself out there. You have to learn how to make connections and how to audition. I’ve been turned down thousands of time. I hear the word ‘no’ a lot. You have to try to find that sweet spot and keep moving forward. You can’t get too high or too low.”

After Rollins, Fitzgerald studied at the American Conservatory Theater in San Francisco and found work in regional theaters to keep sharpening his skills. Along the way, he also landed occasional roles in several TV shows, including The Good Wife.

Yet even after nearly 20 years in show business, he not only keeps learning about the art of theater, but also the business of being an actor.

Being an actor, Fitzgerald says, also means making connections, being available to talk to people who might not think of you for a role until years later, and learning to deal with the stress of auditions and the inevitable rejections. Even with skill, dedication, and hard work, Fitzgerald notes the element of luck. Or at least very good timing.

For example, he was performing in London in the musical Barnum and doing circus tricks such as walking a tightrope. The well-known Broadway producer Barry Weissler saw him and later asked if he wanted to play the husband in Chicago. The timing was right, so Fitzgerald was happy to jump on board. A few months later, the producer suggested he switch to the role of the slick-talking lawyer, played in the movie by Richard Gere.

At first, he hesitated, not seeing himself as the elegant, leading actor type. “My initial reaction was that this role is for the tall and suave. Suave is not my thing.”

However, he was told that he could do the role in a different way: less smooth and polished, more hard-driven and tough. “It’s not something I ever imagined I’d be doing,” Fitzgerald says. “I’m definitely a character actor.”

That intrigued him. He said yes and has loved the challenge of creating a new take on the well-known role. You might think he’d have both roles in his head when he steps on stage, but Fitzgerald said that once the play starts, he rarely thinks about the husband role he played earlier. “You kind of click in on what you’re doing; you’re focused on the task at hand. You focus on what your character is doing.”

Fitzgerald said he was honored to be named as a recipient of the Rollins Alumni Achievement Award earlier this year. He retains a fondness for his time on campus.

After growing up in Maine, he loved the easy winters of Central Florida. However, he also recalls the thrill he felt when he entered the Annie Russell Theatre for the first time and how his professors cultivated a sense of family for students pursuing all aspects of theater from acting to production. “I was learning how to work with other people, how to create something together, and how to risk something together. There’s something magical about that.”

Fitzgerald said he sometimes thinks of acting in terms of sailing. His stepfather was a sailing instructor in Maine, and he learned to make the most of the little gusts that can propel you forward. He also learned about keeping the vessel shipshape, mooring it in bad weather, maintaining the gear, and accepting that some days there just isn't a decent breeze to be found.

“Every once and a while,” Fitzgerald says, “you get great wind, and there is great group of people with you on the water. But you have to be able to keep moving forward without wind.”