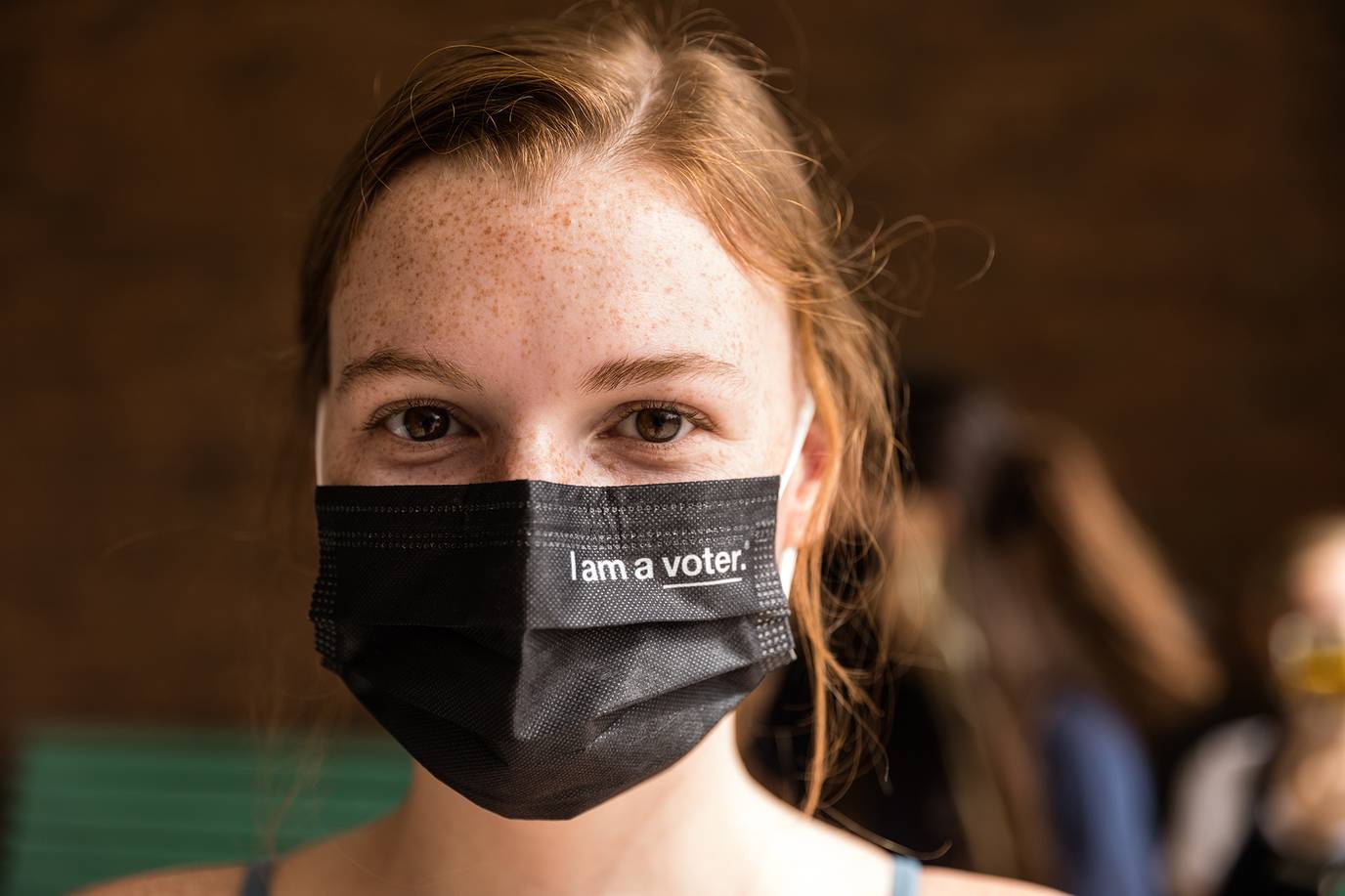 One of Rollins’ most popular and active student organizations, the Democracy Project creates a strategic road map to engage students in the electoral process.

In its 10th year, the student-led initiative drives campus efforts year-round to inform, inspire, and elevate participation in democratic ideals and institutions, the effects of which reach to the local, national, and even global communities in which Rollins students engage. The Democracy Project is not just for eligible U.S. voters either; noncitizens are active participants, exploring the broader concepts of citizenship.

“Although a huge piece of our mission is voter registration and education, it goes well beyond that,” says Bailey Clark ’11, associate director of Rollins’ Center for Leadership & Community Engagement, which facilitates the Democracy Project. “We encourage students to engage in conversations about what’s happening in the world and what can be done to address some of the biggest challenges in our generation.”

Just this fall, the Democracy Project has helped more than 210 Tars register to vote, going door to door (masked up, of course) and staffing tables on Tars Plaza in partnership with the Orange County Supervisor of Elections. The group’s 12 student coordinators have hosted a slew of in-person and virtual events to celebrate and promote participatory democracy, including debate watch parties in which students performed on-the-spot fact-checking of candidates’ claims, book clubs, film screenings, and the much-loved Politics on Tap event, the most recent of which engaged students in deliberative dialogue about the movement to remove Civil War Confederate monuments.

Thanks in large part to these efforts, Rollins has been recognized repeatedly as a Voter-Friendly Campus of the Year by the Campus Vote Project and Student Affairs Administrators in Higher Education. The College—which continually boasts higher voter turnouts than its peer institutions—works to set an example in the civic engagement space. The Democracy Project is a key ingredient in making this a reality by creating strategic plans to help students overcome barriers to participating in the political process.

“Being an active participant in a democracy requires persistence,” says Clark. “You have to consistently seek out information not only about elected officials, but also about policies, laws, legislation—things that impact our daily lives and our communities. Democracy requires active citizenship, which is part of the Rollins mission.” 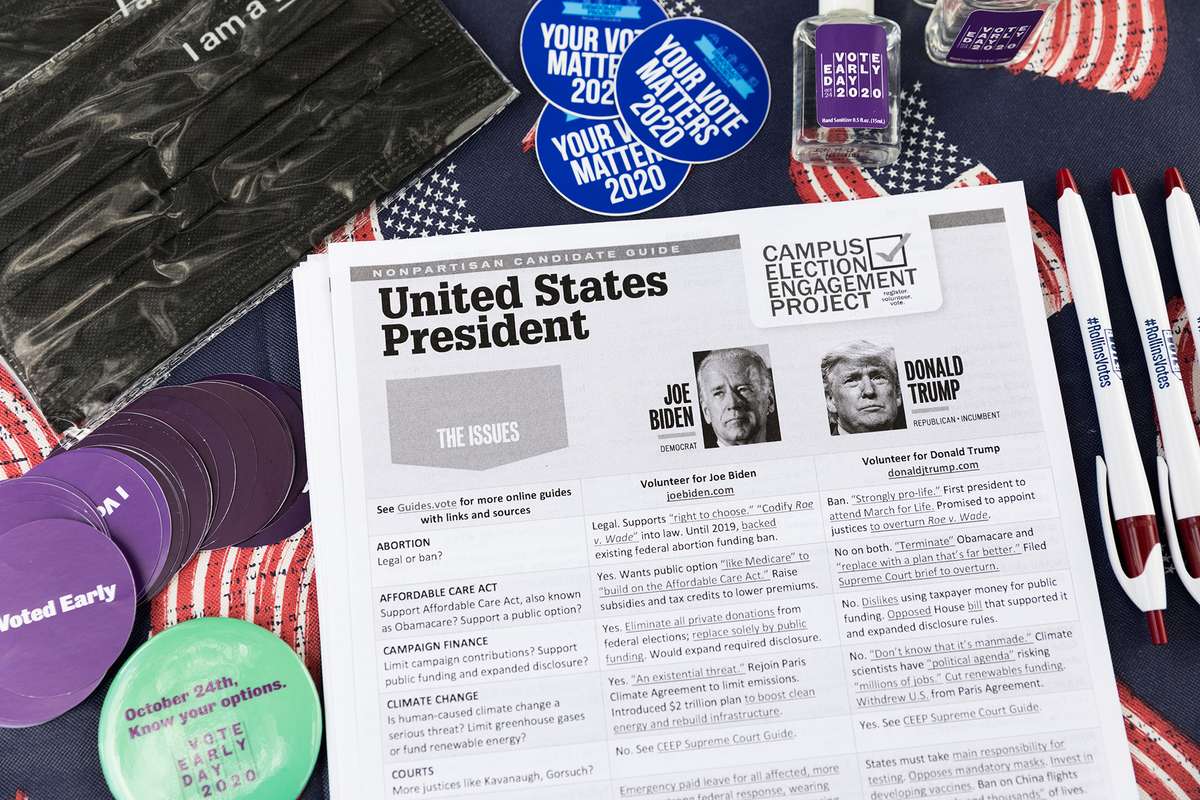 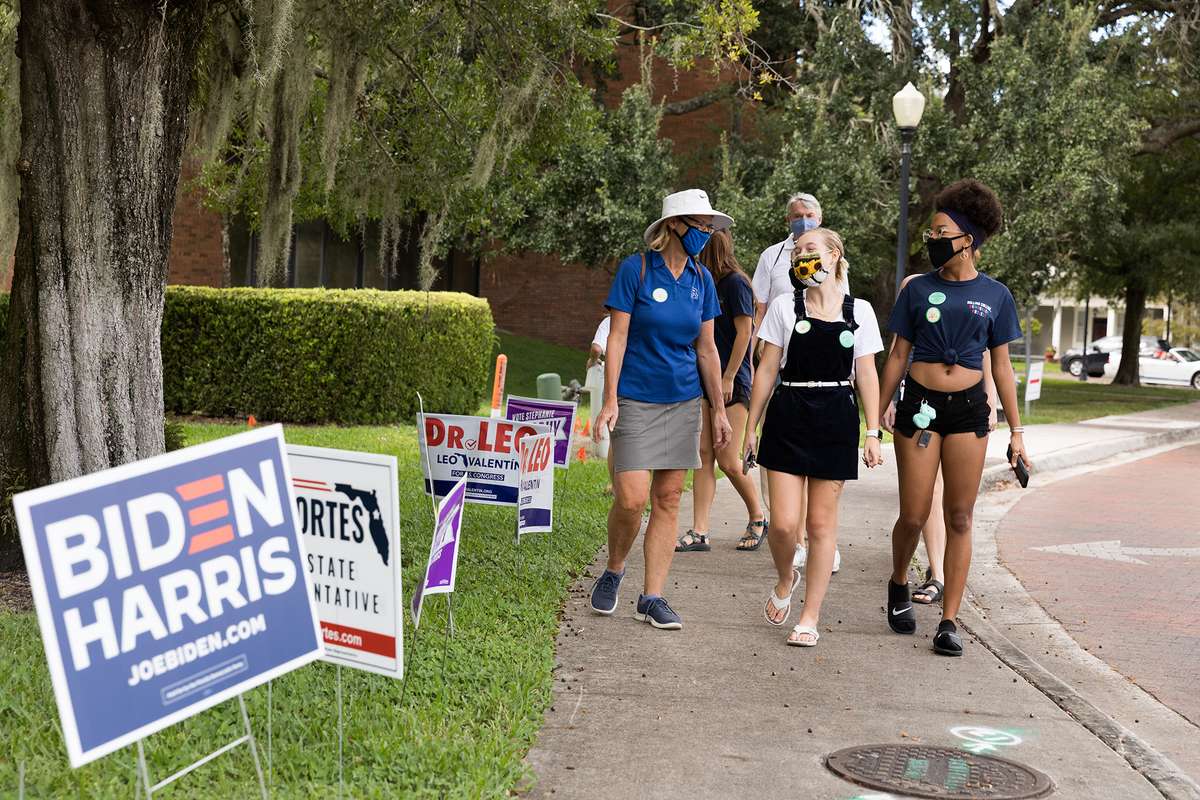 With a historic election fast approaching, the Democracy Project has been implementing campus-wide efforts to encourage the Rollins community to make a plan to vote and to vote early. Student coordinators have been hard at work empowering Tars with information about all the different ways to vote, whether by mail, ballot drop-off, as an absentee voter, or in person.

We tagged along this past Saturday, October 24, as a group of masked-up Tars joined President Cornwell and Peg Cornwell—pocket hand sanitizers and ballpoint pens in tow—as they walked over to the Winter Park Public Library, just steps from campus, to cast their ballots. “I’m a voter” masks along with sample ballots and nonpartisan candidate guides were passed out, and Democracy Project student coordinators stood at the ready to answer questions like, “Will this identification card work?” or “Can I use blue ink?”

On Election Day, Tuesday, November 3, fleets of students can bike over to the Winter Park 9th Grade Center either to vote on-site or drop off mail-in ballots. This new, two-wheeled Rally to the Polls effort was developed in partnership with Rollins’ Sustainability Program to get out the vote.

On the evening of the election, Tars will don masks and spread out on socially distanced picnic blankets on Mills Lawn to watch as the long-awaited results start rolling in. Post-election analysis and events are planned too, providing a safe space for all Tars to share their thoughts and feelings, and to look beyond the executive-office results to examine the state and local elections and important initiatives on the ballot this year, such as raising the minimum wage in Florida.

Sophia Allred ’22 expects a future career of service to draw on her experiences with the Democracy Project. The political science major has been breaking barriers to civic engagement among students of all political persuasions by planning events, making voting resources available online, and increasing the group’s social media presence, ultimately refining her own skills in collaboration, listening, and educating others.

“Having the opportunity to be the Democracy Project student coordinator allows me to have a hands-on leadership role in increasing the civic engagement of the community I live in,” says Allred, a law school hopeful who embodies Rollins’ mission of global citizenship and responsible leadership. “My goals and aspirations are to engage my local community to participate actively in the democratic process, and this means taking the initiative to be educated about what’s going on in our society and actively engaging in respectful dialogue and debate about the issues that define our lives.”

Skylar Knight ’19 credits his experience as a student coordinator for the Democracy Project as a pivotal waypoint on his Rollins journey. The political science and philosophy double major learned that being a leader is about empowering others, working tirelessly to help give Rollins students an informed voice and providing them with educational platforms to openly discuss contemporary issues.

A dual citizen of the U.S. and the Netherlands who aspires to a career in international affairs, Knight is now in our nation’s capital at George Washington University pursuing a master’s of public administration with a concentration in democracy, rights, and governance. He’s also working alongside senior leadership at Issue One, a nonprofit that advocates for bipartisan political reforms that enable the government to function more effectively, ethically, and transparently.

In 2016, Rollins’ voter turnout was 62 percent. The Democracy Project’s goal this year? 70 percent.

Stay tuned to #RollinsVotes for how to get involved in the political process and make sure your voice is heard.