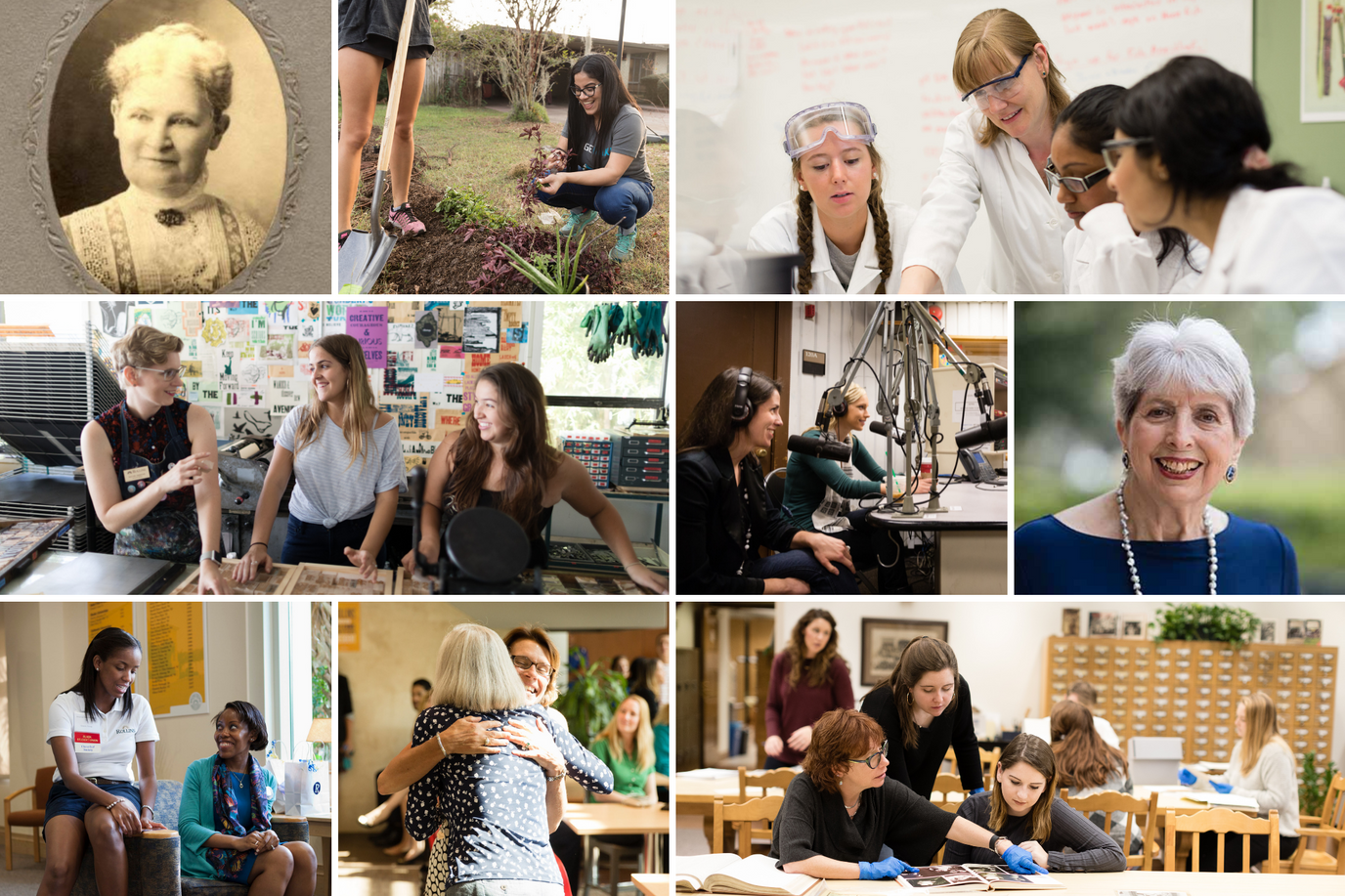 For more than 130 years, the story of Rollins has interlaced with the larger history of our nation, including the lives of many women with ties to the College who have paved the way for gender equality both on campus and beyond.

Rollins hosted suffragettes in the early 1900s, liberation activists in the ’60s and ’70s, and ushered in a new millennium with the addition of a sexuality, women’s, and gender studies minor. To celebrate Women’s History Month, we’re looking back at just a few of the influential women of Rollins who have made an impact on our campus and in communities around the world, blazing the trail for the pioneering women who would follow in their footsteps.

The Mother of Rollins

Lifelong educator and advocate Lucy Cross is often referred to as the “mother of Rollins” because of her involvement in the campaign to establish a college in Winter Park in the late 1800s. During a time when Florida had only eight high schools in the entire state, Cross wrote a paper extolling the benefits that an institution of higher learning could bring to the region. The paper went on to inspire members of the Congressional Association of Winter Park to form a committee to study the prospect of establishing a college, and the next year, Rollins was founded.

Cross’ influence didn’t stop there. She was also a suffragette, and when white women earned the right to vote in 1920, Cross made sure she was first in line to register at city hall in Daytona Beach. When she learned that the official voter registration book had not yet made it to the office from the next town over, she responded with characteristic determination: “I have waited over 60 years to vote—a few more days will not matter.”

A Force of Firsts

Rollins has been a co-educational institution from the very beginning, but did you know that the first graduating class was entirely female? At a time when women were just breaking into higher education, Ida May Missildine and Clara Louise Guild made history as the first graduates of the College in 1890.

Rollins also featured female faculty from the beginning. Clara Guild’s sister, Alice Guild, joined Rollins in 1886 when she was chosen by then-president Edward Hooker to organize the College’s first art department. Alice remained part of the Rollins faculty for 12 years and went on to found the Winter Park Library.

In 1935, Rollins president Hamilton Holt honored Alice with the prestigious Rollins Decoration of Honor, saying, “Alice Ellen Guild, good sister of a good sister, and a member of our family who helped establish in this community the ideal of civic beauty toward which Winter Park has striven and to which our beloved city has now arrived, for your continuous services, both professional and personal, to Rollins College during the past half-century, I bestow upon you the Rollins Decoration of Honor.”

While enrolled at Rollins, Muriel Fox ’46—co-founder of the National Organization for Women—demonstrated the same interest in politics and activism that would go on to define her life’s work. She wrote for The Sandspur and worked as a correspondent for the United Press. Fox co-authored a paper in 1946 as part of the honors seminar The Atomic Bomb and World Government presented by Hamilton Holt, Rollins’ eighth president. Over the years, Fox has returned to Rollins to speak with students, staff, and faculty. In 2011, she participated in an oral-history project with women’s studies minors that culminated in the Rollins Feminist Forum, which was featured in USA Today.

Rita Bornstein ’04H ’04HAL served as Rollins’ 13th president and came to the College in 1990 as the first woman to hold that title. A strident defender of Title IX— the federal civil rights law that made it illegal for federally funded colleges to discriminate based on sex—Bornstein pushed to further implement gender equality protections for Rollins students.

Under her leadership, the College went from ranking as the No. 6 regional university in the South by U.S. News & World Report to earning the No. 1 spot. Bornstein was a prolific fundraiser, spearheading a major campaign to support academics, scholarships, and facilities. She left the College in 2004, but the indelible legacy she created continues as Rollins remains committed to the tenets of excellence, innovation, and community that defined her presidency. A wing in the new Lakeside Neighborhood has been named for Bornstein as a lasting tribute to this campus icon.

Building the Heart of Campus

On January 14, 2020, the Rollins community gathered to celebrate the opening of Kathleen W. Rollins Hall, the College’s new center for applied liberal arts education. The new state-of-the-art facility—located at the heart of campus and at the center of our mission—was powered by a $10 million gift from Rollins Trustee Kathleen W. Rollins ’75, who has helped the College couple its liberal arts ethos with programs that enable students to put their education to work in the world.

As a student, Rollins studied behavioral science and was an active member of her sorority, Chi Omega. She went on to earn a master’s degree in sociology from Georgia State University. Rollins now serves as executive director of the Gary W. Rollins Foundation, which supports children’s education, arts, and health initiatives, and she was elected to the Rollins College Board of Trustees in 2018.

“I entered Rollins at a point in my life when I was discovering different points of view, lifestyles, and ways of thinking than what I had experienced growing up in a small town in Georgia,” Rollins told The Sandspur in 2019. “At Rollins, I found acceptance from like-minded people as well as many more exciting questions, answers, and possibilities. I was inspired by professors and other students to think outside the box and to imagine possibilities not previously considered. I just seemed to fit well at Rollins.”

Rollins offers a minor in sexuality, women’s, and gender studies (SWAG), but valedictorian Hanna Cody ’16 decided to take her interest in gender and culture a step further. And that’s what a Rollins education is all about—charting your own course to personal and professional success.

With the help of the Rollins Leadership Ally Program, Cody pursued an interdisciplinary course of study that focused on how gender and sexuality impact individuals and societies. Combining courses across the liberal arts—from anthropology to religious studies—Cody became the first student to graduate from Rollins with a degree in gender studies. After going on to work at UNICEF as a child rights and business advocacy consultant, Cody is currently pursuing a master’s degree in public administration and human rights at Columbia University.

Building on the changes enacted by the women who came before them, Rollins students, faculty, and staff continue to build an ongoing network of support for women and their allies on campus.

In addition to the SWAG minor, students interested in feminist awareness and activism can join Voices, a student organization focused on community service, gender equality, and intersectional feminism. Voices' home base is the Lucy Cross Center for Women and Their Allies, aptly named for the woman whose vision for an institution of liberal arts is still going strong more than a century later. Soon, the Lucy Cross Center will have a new home in the Lakeside Neighborhood, providing central access and resources to all Rollins students, regardless of race, gender identity, or sexual orientation.

Honoring the Women of Rollins

Join us in celebrating all the women of Rollins who are making a positive difference in the world. For Women’s History Month, we invite you to tell us about the female Tars—both past and present—who have impacted your life, our campus community, or communities across the globe. We’ll collect all of your stories into a lasting tribute to the remarkable women of Rollins.
Share Your Story