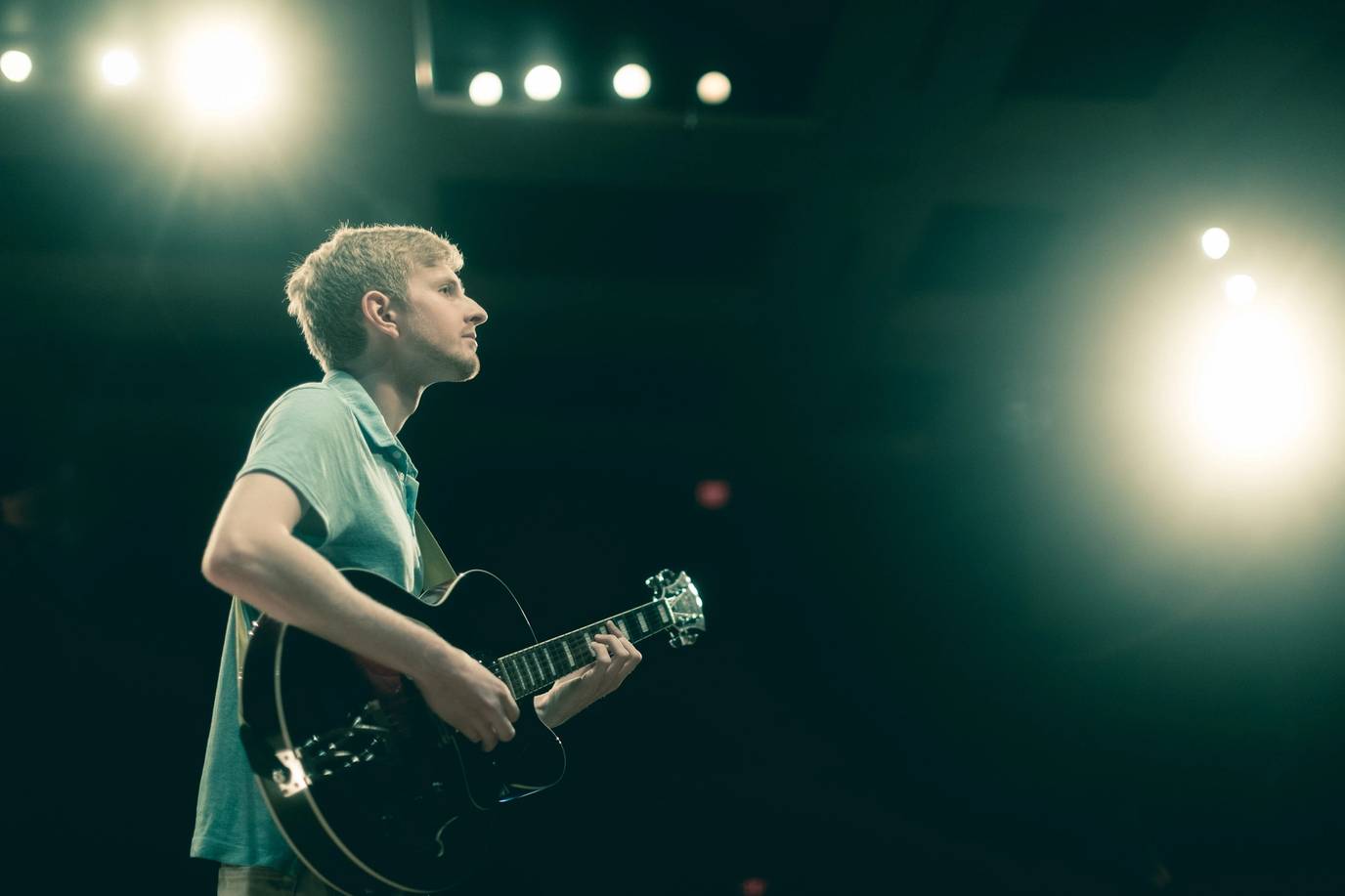 When Ben Wozniak ’17 travels to Germany this fall on a Fulbright Scholarship, you can bet his guitar will help students learn the English language.

Driving home from church worship practice that Wednesday night in early April, Ben Wozniak ’17 got the most glorious email of his life: Congratulations on being named a Fulbright scholar.

Somewhere on the road to Waterford Lakes, a shout of joy pierced the air inside a young musician’s 2004 Mercury Sable.

“I had a pretty good feeling about my chances, but that just confirmed it,” says Wozniak, an intern guitarist at First Baptist Winter Park. “I called everyone in my family and told them I got the Fulbright.”

A music major with a double minor in German and Spanish, Wozniak will teach English in the German state of Bavaria this fall as part of the U.S. government’s flagship international educational exchange program.

Before leaving on his 10-month journey in September, Wozniak—Rollins’ 41st Fulbright recipient since 2006—took time to reflect on his four years at the College, with an eye on what lies ahead.

How has Rollins prepared you for this stage of life? “One of the biggest influences was studying abroad in Munich the spring of my sophomore year—that opened my eyes to a lot of different ways of thinking, and it was a big confidence booster for my language abilities. On the music side, I’ve been able to take everything from classical voice to jazz guitar to songwriting. It’s a relatively small department, so it’s very easy to make connections with professors and expand my knowledge.”

What are your career goals? “I’d love to be able to get into the music industry in whatever city I end up in, and I want to spend some time in Europe and Latin America to get to know people and have cross-cultural experiences. My ideal job would combine music and languages to some degree, but I don’t want to close myself off from any other opportunities like translating or interpreting.”

Will you use music to help your German students learn English? “I don’t know if you’ve seen School of Rock, but that’s sort of the image I have in mind. (Editor’s note: Wozniak gives lessons at his father’s Classic Rock School of Music in east Orlando.) I’d love to bring the guitar into the classroom and teach them English through that. Music is so powerful in learning languages—it’s helped me tremendously. I have the first few buttons on my car radio programmed to Spanish-language stations, and there’s also a Brazilian station I listen to for fun.”

You hosted a radio show every Monday on WPRK called Music of the World. Where did you get your material? “It was partially music I heard on the airwaves in Orlando and partially what I came across surfing the web or through my travels. I wanted to share my experience in world music, and that meant anything that’s not typically played on an American station. So I played all sorts of stuff, from Latin American heavy metal to traditional Turkish music.”

What was it like to spend a semester in Munich? “I remember looking out from my ninth-floor apartment window and writing songs about spending time in the English Garden and on the rivers. I got to explore the city and neighboring countries, and just being by myself taught me a lot more about how to study and relax. I had my own small apartment, so I was doing my own cooking and enjoyed the responsibility and challenge of becoming very self-reliant. Plus, it was really cool studying in a different country because you can pick up on all the different nuances—like at the end of a lecture, students would knock on the table instead of clapping for the professor.”

You teamed up with Hayley Pflug ’18 to start the duo True Sound. How did that come about? Hayley and I met in the music department, and we also sing at church together. It’s mostly a duo, but we add some people for different gigs. Hayley and I found we have a lot of the same musical interests, and we worked really well together.”

How would you describe your musical style? “I just write whatever feels natural and just want to reflect my influences and put a spin on something. I want to create art, so I’ve experimented in a bunch of different styles. Singer-songwriter often gives the impression of playing three chords and singing a hook, but I want to go beyond that and incorporate all different types of elements—rock, jazz, classical, world music, R&B, salsa, whatever. I love writing songs that are really genuine to my faith and doubts and my beliefs—going to happy places and dark places.”

Who are some of the biggest musical influences in your life? My dad taught me how to play the guitar when I was 8, and he used to play for me and my brother when we were falling asleep every night—a lot of classic rock and folk tunes. My dad also got me into The Beatles when I was little, and maybe a lesser-known band is Switchfoot—the faith of the lead singer has been a big influence on me.”

Any faculty or staff members you’d like to recognize? “I’ve known Frau (Nancy) Decker for all of my college career, even a little bit before, and she’s always been super supportive. I took most of my German classes with her. Chuck Archard (artist-in-residence, contemporary/jazz studies) has really helped me craft my music, and Jay Shivamoggi (director of external and competitive scholarships) helped me a lot with the Fulbright application process.”

What’s a favorite memory you’ll take with you from Rollins? “My junior year we had a songwriting class presentation out by the lake. I had my guitar and played a song for a small group of classmates. That was a pretty cool experience.”