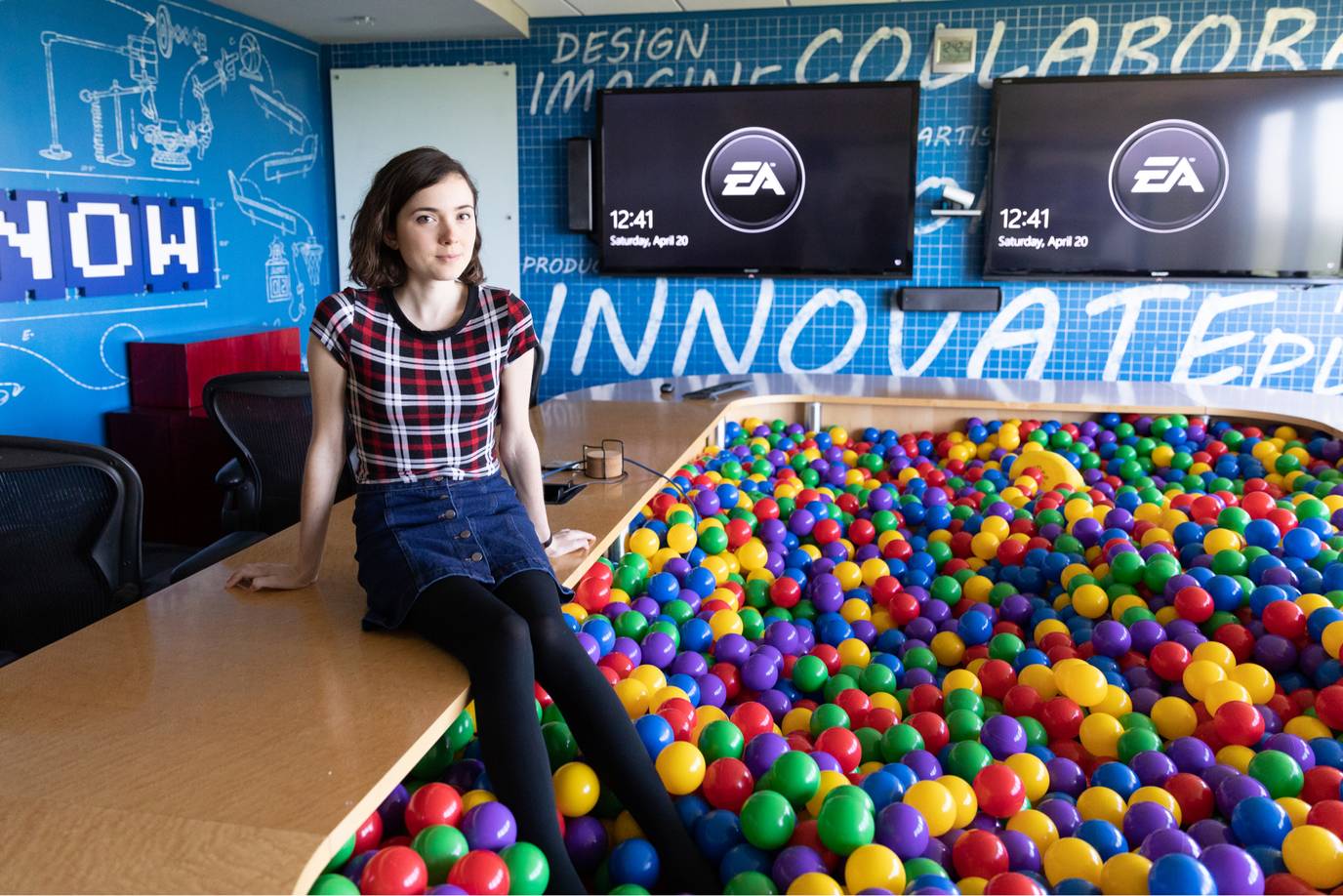 Just yesterday, it seems, they were cramming for finals and putting the finishing touches on senior capstone projects.

Now, graduates of Rollins’ computer science class of 2018 are working for some of the world’s top companies—including the likes of Apple, Electronic Arts, and Lockheed Martin—and have earned or are working toward graduate degrees at schools that include Harvard, UC Berkeley, and Georgia Tech.

It’s quite a high-tech accomplishment for a small college rooted in the liberal arts—but therein lies the secret. Take Carmen Cheng ’18, for example.

Cheng, a full stack engineer at Zuellig Pharma in Singapore, leveraged her liberal arts education to double major in computer science and critical media and cultural studies, a synthesis she credits with developing big-picture, critical-thinking skills, especially on the job.

“It helps me question why things work a certain way and how we can improve it,” says Cheng. “At Rollins I discovered that learning doesn’t have to be boring and passions don’t have to be compartmentalized. I’ve had the privilege to get this great education, and I want to use these tools to change things for the better.”

The success of Cheng and her well-rounded cohorts comes as no surprise to Valerie Summet, associate professor of computer science.

“It’s a Rollins culture thing,” says Summet. “It’s the way we look at how education should work. Students should be able to tie together all these things they’re learning into a holistic package. That breadth and depth of education is a hallmark of Rollins and our computer science students.”

Summet and her fellow computer science professors are making sure their curriculum is keeping pace with the fast-evolving job market. Four years ago, they assembled an advisory board of industry professionals from influential local companies to help keep them on their toes.

While working as a customer success lead at IBM, Mac Guidera ’18 was studying organizational behavior in the Hamilton Holt School (his second undergrad degree) when he was approached about joining the advisory board. Now, he provides feedback on curriculum, keeps a pulse on important computer science trends, and offers an employer’s perspective on what makes a new hire competitive.

“Rollins students have the freedom to cultivate their ideas on capstone-type projects and work together as a team,” says Guidera, who’s now working in customer success operations and strategy at Amazon Web Services. “That allows for an approximate setup of what you’re going to get when you join the workforce.”

Fellow advisory board member Kris Siegmundt, who oversees about 2,000 software engineers in Lockheed Martin’s Rotary and Mission Systems business area, says her company has been “extremely pleased” with the 10 Rollins graduates Lockheed has hired as interns or full-time employees over the past two years.

“We’ve seen that Rollins students have the knowledge and skills needed for our entry-level positions,” says Siegmundt, “but more importantly, they have the ability to analyze problems and work well as part of the team. They are well-equipped to enter the workforce.”

Here’s a closer look at a few of the many standouts from Rollins’ computer science class of 2018:

At the same time Arden Baxter ’18 started solving coding puzzles in her Rollins computer science classes, she attended her first Immersion focused on migrant farmworkers and started to discover how mathematics could actually serve to make a difference in people's daily lives.

Baxter is currently pursuing a PhD in operations research with the ultimate goal of helping aid organizations like the Red Cross and the CDC improve logistics after natural disasters.

“These days it’s so important to have critical-thinking and problem-solving skills, and that’s what I got at Rollins,” says Baxter. “I learned skills that will help me in my career and help me learn about a new topic more easily. That’s something unique about Rollins—they focus on learning how to learn.”

Halfway around the world, Cheng has just helped develop a COVID-19 mass-vaccination mobile application for use in the Philippines. The app has over 400,000 registered users and counting.

At Rollins, being immersed in the liberal arts not only complemented her computer science degree, but it helped foster close relationships with faculty who invested in her as an individual.

“The personable air of it all, I kind of felt like I wasn’t even ‘in’ school,” says Cheng. “Just being able to walk into a professor’s office and see they have the same level of respect for you—that’s something I wouldn’t trade for anything else.”

Like many computer science students, Chatlani came to Rollins to learn to code. Thanks to the College’s intimate and personalized learning environment, he discovered much more.

Through Rollins’ Student-Faculty Collaborative Scholarship Program, Chatlani partnered with computer science professor Dan Myers to develop an adaptive system for training new programmers in coding literacy. Their research led to an article in a national journal, a presentation at a national conference, and a grant from the Mindlin Foundation.

Now he’s pursuing a PhD in human-computer interaction at the University of Central Florida, where his research focuses on online safety for adolescents and developing ways for teenagers to mitigate risks while engaging with others online.

“I came to Rollins to learn to code and engineer software, but I also got a broader education that helped me understand the things that I really want to focus on in my life,” says Chatlani. “College is no small investment, so you really ought to put that investment to something as significant as finding what you truly value and something that you want to push toward.”

Alexandra DeLucia ’18 turned a summer internship at Los Alamos National Laboratory into a postgraduate research position working on supercomputing and machine learning. She finished her final year at Los Alamos in 2019 before beginning a PhD program in computer science at Johns Hopkins, where she’s focusing on what she’d been doing in the lab: machine-learning approaches to system monitoring.

“My double major in math and computer science at Rollins gave me the background I needed for my research at Los Alamos and my PhD program at Johns Hopkins,” says DeLucia. “Also, at Rollins I really learned how to work with others and had the chance to interact with professors on a personal and casual basis. I’ve had a leg up in being able to know how to interact with expert-level research professionals.”

As a Rollins student, Gutensohn launched his career into orbit with four consecutive internships at NASA’s Kennedy Space Center and Jet Propulsion Laboratory.

After Rollins, he got his master’s in information management and systems at UC Berkeley, before landing a job as an engineer at Apple’s California headquarters.

“The liberal arts and engineering are more tightly knit than people think,” says Gutensohn. “The interpersonal skills I gained from attending Rollins definitely give me an edge. I’ve been able to talk through design decisions with clients and users, asking questions other developers might not know how to ask.”

Holman has a game developer’s dream job: building and maintaining code for the long-running Madden NFL franchise. Her team works on Madden’s mobile version, releasing updates throughout the year that fix bugs and tackle various other upgrades.

Holman says that Rollins’ emphasis on teamwork, research, and “teaching you how to learn” was the perfect preparation for EA’s highly collaborative, constantly evolving workplace.

“The thing about software engineering is, as much school as you have, you’re not going to know everything,” she says. “There’s no way because it’s always changing. So the love of learning is really important in this field—and Rollins and the professors are really good at fostering that.”

As a Rollins student, Sadeh combined his passions for computer science and service to found an after-school coding program for fourth-graders at a pair of local Title I schools in Orlando. The program earned a grant through Google’s igniteCS initiative, which helps college students make a difference in their communities through computer science mentorship.

As a graduate, Sadeh is dedicating his career to merging technology and education to create positive change in the world. After receiving a master’s of education at Harvard University’s Technology, Innovation, and Education Program, Sadeh recently accepted a position as a learning designer at Columbia University.

“Rollins helps you figure out what you really care about and gives you the tools and the opportunities to make your mark in the world,” says Sadeh. “My advisor, Dr. [Dan] Myers, he wanted to know what my future goals were and what I was passionate about and from that he found opportunities to help me get where I wanted to go.”

Sarver ’18 got bit by a good kind of computer bug when she took Julie Anderson’s Intro to Computer Science course, and it was an interest that took hold just as much because of the professor as it did from the subject matter. Anderson became a mentor to Sarver, teaching her the importance of becoming a lifelong learner, especially in the realm of computer science and software development.

Sarver also played on the women’s softball team, where she was connected through assistant coach Steven Frew to Riptide Software—a local development company focused on training technologies for corporations, government, and the military—where Frew also works. The budding computer scientist secured an internship at Riptide her junior and senior years at Rollins before getting hired there as a software engineer for her first job after graduation.

These days Sarver is putting her technical prowess to work as a software engineer at Lockheed Martin, where she’s focusing on programming and development for the Missiles and Fire Control division. Her long-term career goals include project management in a role where she oversees the planning and operational process of managing a development team.

“Change is a good thing, and Rollins taught me that,” says Sarver. “I feel prepared to always keep pushing and learning. And the networking and interpersonal connections I made at Rollins helped me thrive and become confident in my work. Rollins prepared me to be a leader who doesn’t given up on any task.”

Zere recently received a dual master’s degree from Cornell University in information systems and connective media, which focuses on the human and social aspects of technology. He’s currently working in Turkey as a product manager at ARDIC, a cable management systems manufacturer, and has his sights set on building a successful tech company in the startup ecosystem.

He credits Rollins for helping him step outside his comfort zone, make personal connections, and capitalize on academic and extracurricular opportunities.

“I learned about the entanglement of different fields of knowledge and how it’s important to look at things from different perspectives,” says Zere. “Computer science can’t exist in a vacuum. When building systems, it is crucial to focus on the ethical implications and societal impact they might have because what you build will impact real people.”