First Draft of Their Futures 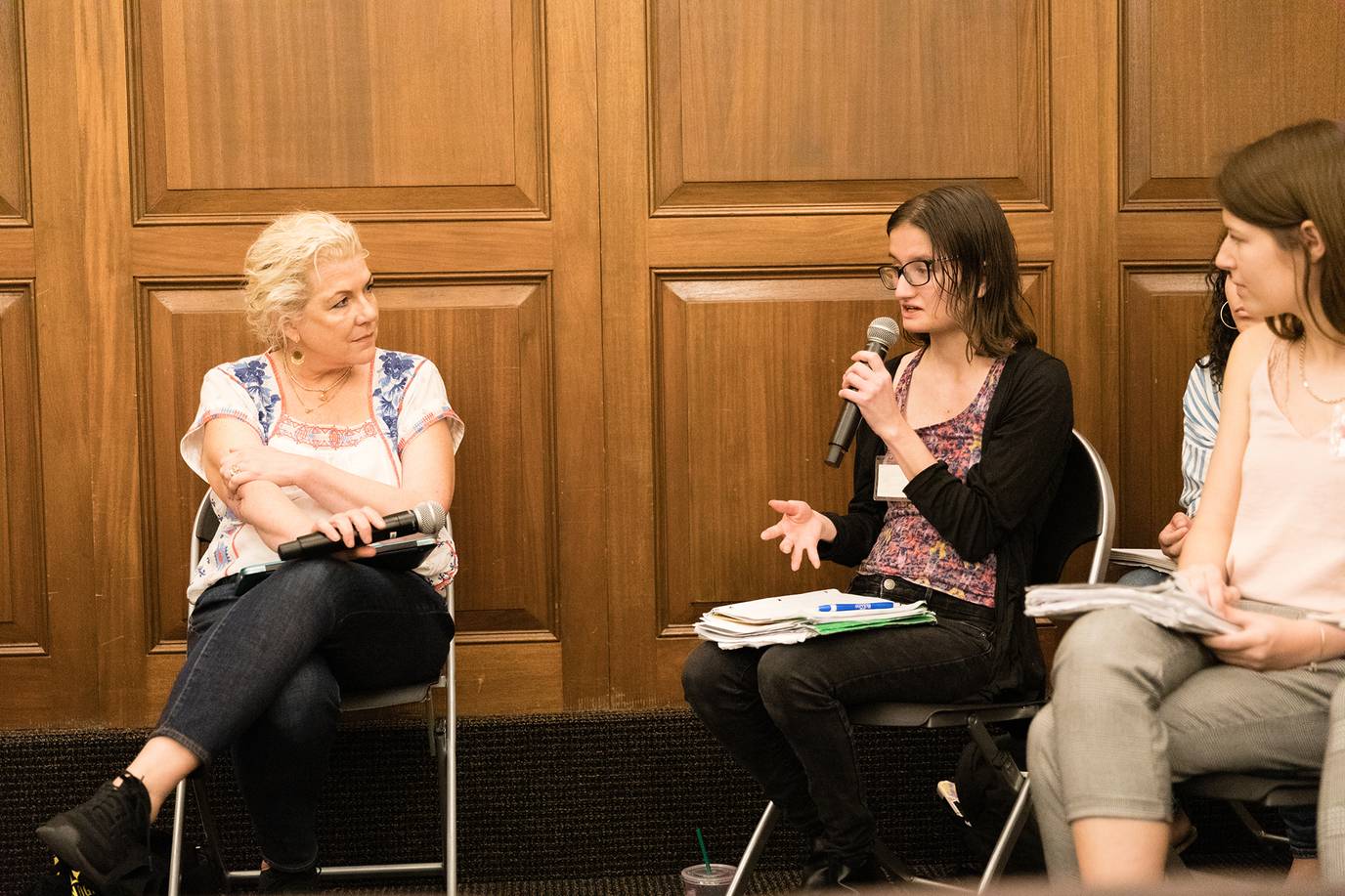 How Winter With the Writers helps Rollins students master their own voice, transforming them into the next generation of savvy storytellers.

Sharing the stage with a prominent writer is not without side effects: Your heartbeat may quicken, your voice may lose its steadiness, and your confidence in your own talents may soar to unrecognizable heights.

Such is the risk and reward of Winter With the Writers, the annual literary festival sponsored by the Department of English that continues Rollins’ long history of bringing celebrated novelists, poets, and other talents to campus. For generations, Rollins students have learned about the art of word slinging from literary giants like Marjorie Kinnan Rawlings, Ogden Nash, Carl Sandburg, Zora Neale Hurston, and many others.

The highlight for a small group of student interns is the round-table-style master classes, organized and overseen by program director and English professor Carol Frost, which directly engage the students and professional authors in discussions about the students’ original works. Every year, a select group of acclaimed writers—which this year included comedian, writer, and actor Mike Birbiglia and National Book Award finalist Jennifer Clement—is invited to lead a class of their own design, workshopping the students’ writing while offering feedback, sparking imagination, and shining a light on their own paths to literary success.

For insight into these literary laboratories, we asked five festival interns to take us behind the scenes of the five master classes from the 2019 season.

The Power of the Group Mind

“We started with a Q&A, then Liz had the interns come on stage and walk around, starting and stopping based just on watching the body language of everyone else in the group. Then we took turns creating a series of stories, first sentence by sentence, then word by word. We learned to create as a group mind, working together as a single unit.”

“The biggest thing I learned is to check your ego at the door. When you sit down to write, it’s not about you but what you are giving to the reader—or the audience, in the case of improv. From Liz’s class, I gained a lot more confidence, which is cool to get from a single class.”

“I will continue working on my thesis, which is a novel. I want to be a novelist. After finishing the thesis, I will work to get an agent while also applying for editing jobs.”

The Gap Between Facts and Feeling

“I didn’t know any of the writers when I applied to be an intern, but I had been to previous Winter With the Writers events. I knew from friends in the program that it’s invaluable to have your work read by established writers, so I was really excited about that. Brian dedicated his time to the three of us who submitted works. He also shared examples of other pieces that were accomplishing similar things to what we were attempting.”

“Brian talked about how so many voices often go unheard in the reporting of stories. Reporting is important, but so is the job of an artist, which is to fill the gap between facts and empathy. If nobody does that, then there ends up being a vast silence.”

“I’m very passionate about ocean conservation. For a different class, I wrote a paper about how important it is for scientists to communicate their findings to non-scientists. Similar to what Brian spoke about, I see a huge gap between communicating the science and having people care about what’s happening on the planet. I want to fill that gap.”

Trust in the Reader

“Before coming to the class, I read Daniel’s book The Boatbuilder, which made me excited to hear what he had to say about my novel because he constructed his so effectively. His workshop was my favorite. He dedicated time to every single piece that students wrote, opening the discussion up so we got feedback not only from the other interns, but from the audience as well.”

“Before the class, I had been overexplaining things in my writing. Daniel pointed out that I need to trust the reader instead and to rely more on imagery. Specifically, he said to describe the clothing of my characters as a way of showing their relationships to one another. Rely on imagery—also don’t include sentences relaying what you just explained through imagery.”

“This internship is so crazy helpful for my resume. Not only would I say this class was helpful, but it made my writing so much better even within these few weeks. This class has reaffirmed that I’m absolutely on the right track. Writing has become my life. After graduation, I’m moving to New York City with the plan to work in publishing.”

The Mix and Flow of Our Mongrel Language

“First we read the poems we had written, then Barbara read our poems aloud. That really brought a new light to how poetry is presented. Then she spent 10 minutes or so going through each of our poems line by line. She found something to really explore in each of our poems.”

“English is a mongrel language that is mixed and complicated and confusing at times. It’s not the perfect language that I thought it was. It’s a mash of tongues. Poetry is the chance to mix everyday words that everyone knows with more elevated words. It turns this mongrel language into something beautiful and redefines language altogether.”

“Barbara Hamby made me feel as though my undergrad work was important, and that’s what budding writers need. After graduation, I plan to pursue a career in librarianship. I also want to publish books of short stories, and I want those books to change people. I want my writing to help people see the world in a different way.”

“Jennifer had us all share why we liked to write as well as the best piece of writing advice we’d ever received. Then we each read our first line and our last line. She instilled in us that the first line of the story is always the most important because it hooks the audience. She also had us read a sample of our dialogue.”

“You really have to make sure that it makes sense that your character is saying what they are saying. You have to get in their head and ask yourself, ‘Would my character say something like this?’ Dialogue has to be interesting. It’s one of the hardest things to work on when making stories. You really have to dedicate yourself to it.”

“I plan to revise some of my works based on the feedback I received. I also want to produce new writing and poems after being inspired by such a great month of working with these literary masters. And I definitely plan to take more writing classes in the remaining time I have at Rollins.”