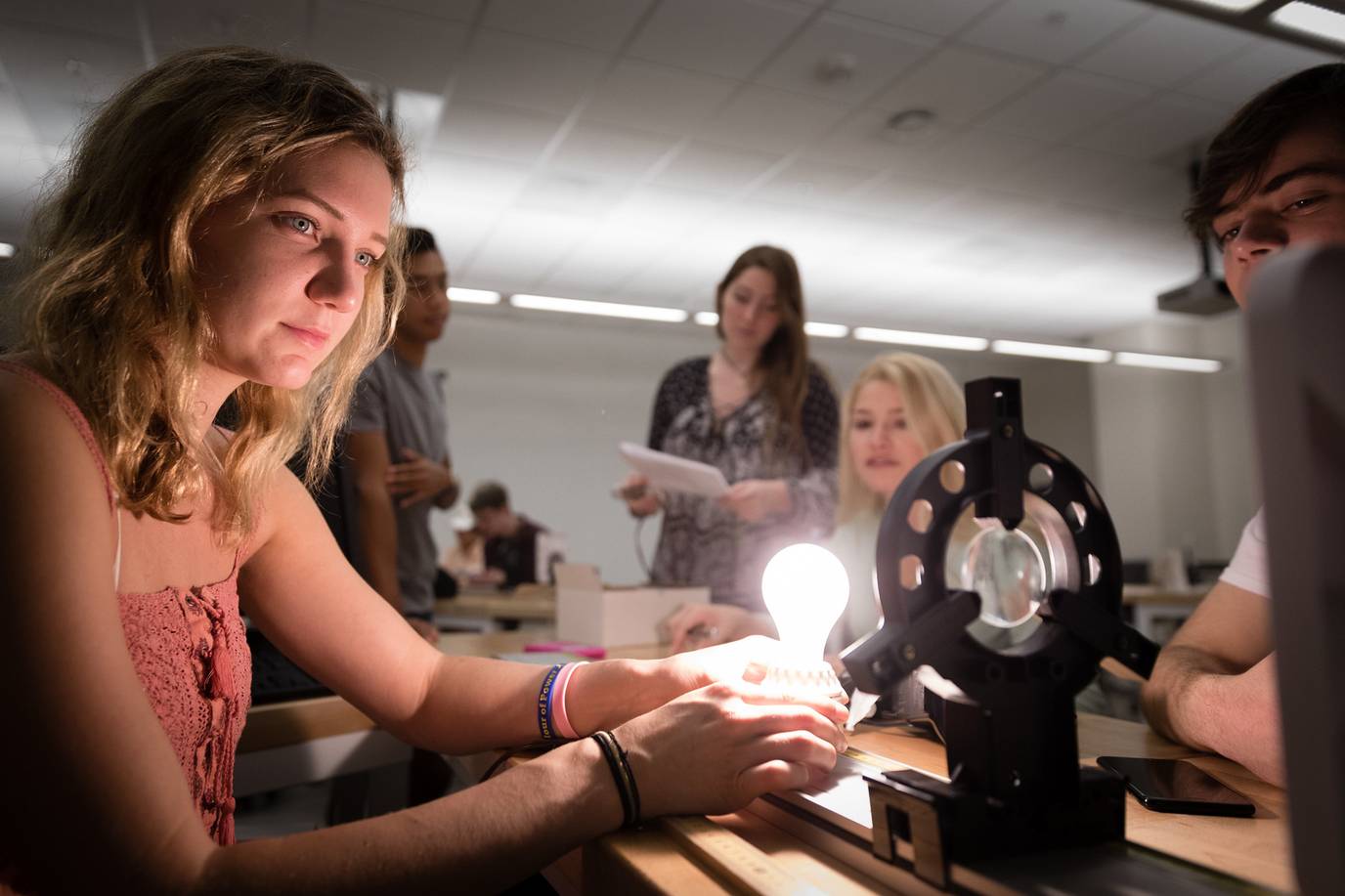 First-year students jump at the chance to become scientifically literate, learning how things work so they can understand why they’re important.

The aim of this Rollins College Conference (RCC) course is to expose first-year students to the science behind the headlines. Understanding the differences between heat and temperature or nuclear bombs and nuclear reactors equips students with the knowledge they need to interpret and question what they’re hearing in the news every day.

“This class is important as an RCC because here at Rollins we strive to educate global citizens and responsible leaders from the start,” says Whitney Coyle, assistant professor of physics. “Part of that responsibility and citizenship comes from voting for our political leaders or becoming one, and we need our leaders to understand science in order to make informed decisions about science.”

Almost daily, Coyle hears the question, “Oh, is that why …?” and smiles, savoring the excitement in the students’ voices as they understand a critical concept for the first time. Why the sky is blue and what a black hole really is are just a couple of the big reveals. After learning the science behind these types of phenomena along with things like electricity and magnetism, the students learn why they should care about them.

“We’re always concerned with checking off boxes of information,” says Coyle, “but having these students come in and learn how to make good decisions is key.”

Perhaps one of the most relevant issues tackled in the course is the difference between nuclear reactors and nuclear bombs. As talks naturally turned to North Korea, students discussed radiation and fallout while learning how more advancements have been made in relation to war efforts than energy harnessing.

“Less funding is going to nuclear because of fear,” says Coyle, “so it’s more important than ever to educate people on the scientific possibilities that are actually out there.”

Another key assignment was to find an article in a popular newspaper that used the words “power” and “energy” correctly. The students had to evaluate if the writer was trying to be colloquial or scientifically accurate and why that difference is so important. To be skeptical of media, to think critically about the content that inundates us each day, to tune into why, as a reader, we are persuaded or dissuaded by an author—these are the big-picture concepts Coyle hopes the students take away from this course.

It wouldn’t be a physics class without a lab. When we dropped by, students were hard at work performing an optics lab, learning about light and how it interacts with certain materials while using lasers, lenses, and mirrors to see reflections and study focal length.

Coyle explains that optical lenses are used in a variety of applications from microscopy to laser processing and in many industries like life sciences, imaging, and defense. She continues by emphasizing the importance of recording scientific measurements with their associated error and using units when reporting numbers.

“To become a global scientist, a global leader,” says Coyle, “it’s important to communicate with other scientists with the standard.”

“I was interested in this course as an RCC because it provides a way to look at physics in a way that is relevant to other majors,” says Johnny Casey ’21, who plans to study political science. “The class tackles science-related issues that have significant impacts on the lives of ordinary people but are often misunderstood.”

“I can’t think of a better way to get introduced to the real meaning of a liberal arts education than by exploring the basics of a subject I most likely wouldn’t have taken classes in,” Casey says. “I’ve gained a general appreciation for science’s ability to offer clarity on certain issues of controversy and a belief in the greater role of science in decision making.”

There is only one physicist in Congress, and of the 535 members, there is just one microbiologist and one chemist. Add to that a mere eight engineers (seven in the House and one in the Senate), and there’s a very small percentage of informed representation making decisions about science and innovation.