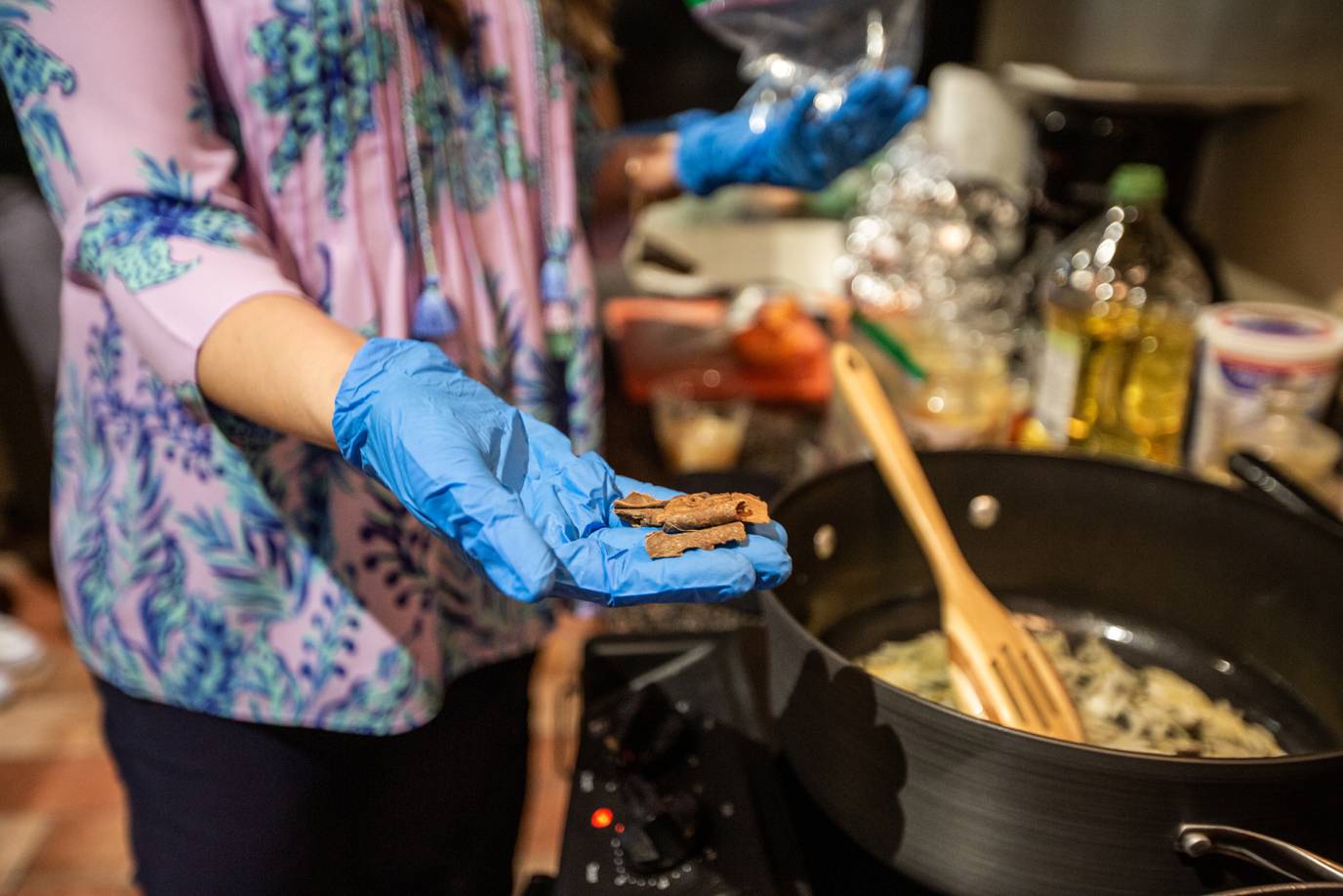 Think of your favorite meal. You’re probably imagining a lot more than just a recipe. Memory, culture, identity, and food, it turns out, are all closely related. We can learn a lot about the people around us by talking about what we eat—and in a diverse community like Central Florida, food opens a window into a globe’s worth of life experiences. That’s the theory behind an anthropology course taught over Intersession, the week before the spring semester starts. Or, put another way: Everybody likes to eat.

As an anthropologist, Rachel Newcomb knows that food plays a significant role in personal and cultural histories, and as a Central Floridian, she knows that immigrants contribute a great deal to the local community. She designed this course to explore the intersection of these two truths. Students spent the five-day course listening to firsthand accounts of immigrants’ experiences, sharing their own food-informed histories, and tasting—and cooking—traditional foods from around the world.

Every day, guest speakers—home cooks from immigrant communities around Central Florida—joined the class to share a meal and a personal story. The format created a bond among the students that even surprised Newcomb.

“Sometimes when you’re teaching in a regular semester it takes weeks, if not months, to build that kind of community, but this was pretty instantaneous,” says Newcomb. “We were meeting four to five hours a day and having pretty personal discussions about our own backgrounds and where we came from. I feel like I was surprised at how nicely food served as a way to get people familiar with one another.”

The class also involved homework: dining at immigrant-owned restaurants. “I wanted to try and humanize the migrant populations in our area as much as possible,” she says. “A lot of times students will not have met them, and they’re really surprised to learn how diverse and international our area is.”

Joane Allonce, who works as a professional chef in Orlando, joined the class to speak about her experience as a Haitian immigrant. Allonce came to the U.S. prior to the 2010 earthquake in Haiti, but Newcomb goes on to explain that the nearly 59,000 Haitian migrants who fled after the devastating earthquake and had received temporary protected status from the U.S. government are now in jeopardy of losing that respite. She hopes the students take away the message that there is more to a person’s story than historical facts and statistical figures.

To help share her story, Allonce brought pickled cabbage, a traditional Haitian dish that no one in the class had tasted before.

“There were two versions. One was spicy, one was supposed to be not so spicy,” remembers Shannon Sullivan ’20. “I tasted the not-as-spicy version—and my mouth is still on fire!”

Newcomb says that’s exactly the kind of interaction that will help inform her students’ future worldviews. She emphasizes how much we can learn about a culture through what they eat and by talking to them about the importance of food in their lives.

Shannon Sullivan ’20 says she sought this class out—and not just for the free lunch.

“I had taken a couple of other courses with Dr. Newcomb, and I really like her teaching style,” she says. “Her classes are very interactive. In this class, we cooked with each other, we heard from guest speakers. On those days, Dr. Newcomb was a student like the rest of us.”

Sullivan, an international relations and Spanish double major, says she left the class with a new appreciation for the immigrant community in her backyard and a desire to learn more.

“After this class, I’ll definitely go back to the restaurants I tried. I would encourage everyone to break bread with one another.”

In Orlando, 14 percent of the population is foreign-born. This number is comprised of people from around the world, including Mexico, Colombia, Haiti, the Philippines, India, Vietnam, Germany, Italy, Egypt, South Africa, and more.