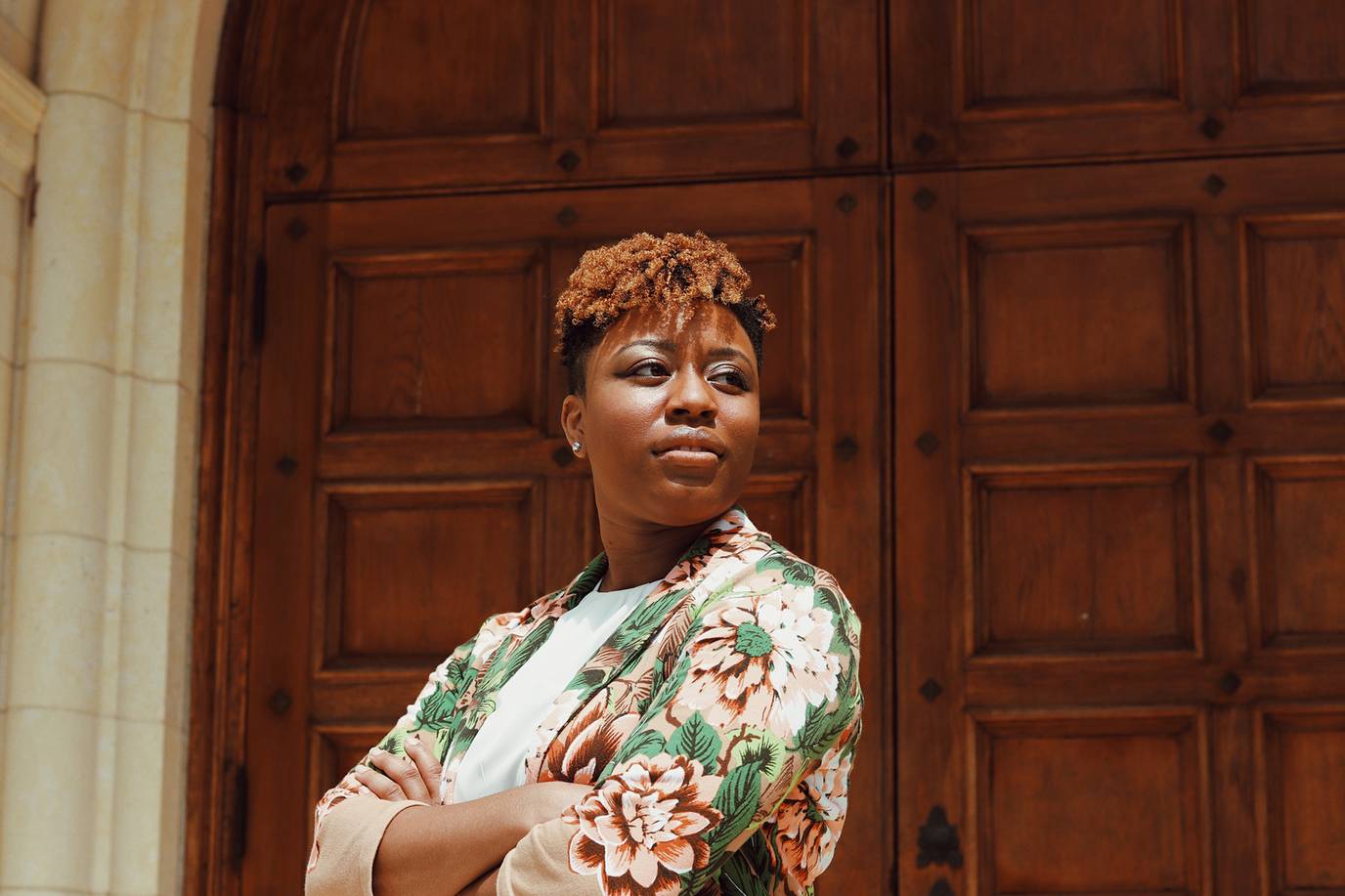 Hannah Munford’s ’21 impressive academic record, which includes induction into the Alpha Sigma Lambda society for nontraditional students, isn’t the only legacy she’s leaving as she graduates from Rollins’ Hamilton Holt School. Through her involvement in everything from the Black Student Union to the Student Government Association, Munford has helped make Rollins a more inclusive place for her peers.

During her time at Rollins, the communication studies major served as a Hamilton Holt Senator and later as PR chair of the Student Government Association as well as press secretary for the Rollins Pre-Law Society, where she focused on helping students understand legalese in layperson terms. Munford’s leadership, diplomacy, and determination as vice president of the Off-Campus Student Association led to the creation of a permanent off-campus student lounge in the new Lakeside Neighborhood. Even in the final weeks of her senior year, the BSU member got involved in a campus-wide effort to weave diversity and inclusion into the core curriculum.

Munford’s gentle, self-effacing style coincides with persistence, professionalism, and a determination to pay forward her learnings to others, which she hopes to channel into a high-impact communications career. As she eyes a hopeful horizon on the verge of graduation and pursues roles related to diversity, inclusion, and communications, we asked Munford to reflect on her time at Rollins.

Taking Black Lives Matter with [sociology professor] Matthew Nichter my first year was transformative. That class had the most people of color in it. It was eye-opening for all of us, for the people of color, to have access to resources that enabled us to start conversations on campus regarding race, and to be able to share with our fellow white allies just how entrenched racism really is. It helped us make sure that our voices were being heard.

People in high school and middle school would tell me that I was playing the race card or that I was making issues appear that weren’t really there. I came from that background to Rollins, where I finally heard that my experiences were validated and that there’s statistical proof—that I didn’t just make it all up in my head. To have the knowledge to defend my experiences, and to further ground them for me to explain to others, was a turning point in learning how to use my voice more and advocate for others so they don’t have the same negative experiences I did.

I love listening to people giving their opinions and their stories. There are so many conflicting opinions and different life experiences on campus. When you focus on the similarities between different people, you can connect more and try to find more common ground as opposed to polarizing against each other or against different groups. And you’re more likely to respect each other that way.

In addition to Dr. Nichter, I found a mentor in Victoria Brown in the English department. She helped me improve my writing skills and find my voice. Then she helped me make my voice stronger and pinpoint it so I knew what my style was. And she helped me navigate how to enter academic and intellectual spaces as a Black woman and how to be taken seriously in certain circles.

I have issues with communicating and a hesitancy to speak. I had to force myself to overcome that fear by entering my communication studies major and being forced to speak publicly on multiple occasions. I became involved in different activities because people would tell me, ‘You need to apply, and I really need your help.’

Advocating for commuter and off-campus students to have a permanent space on campus was a rewarding experience. As vice president of the Off-Campus Student Association, I helped our team make a case to the administration for a permanent new space on campus when they were constructing buildings in the Lakeside Neighborhood. We submitted a petition with over 400 signatures. We helped with the design and location and everything, and now it’s constructed.

I’m working with a team to change the diversity and inclusion curriculum to include more experiences beyond Euro-centric history. It’s a student-led group, spearheaded by Nourhan Mesbah ’21, the Student Government Association diversity and inclusion chair. We’re pushing for a more diverse curriculum that includes a broader range of experiences with regard to race, gender, sexuality, and religion.

Before I became secretary of the Pre-Law Society, I asked the outgoing president if we could hold a criminal justice panel. I wanted to know what rights we had when interacting with police officers, with the police brutality cases that were happening at the time. So we contacted different panelists who had experience with law or advocacy regarding racial justice, and they sat down and talked to students about their rights within the law, which also helped validate their experiences.

Communication professor David Painter showed me the power of service-oriented learning and how it applies to public relations. We partnered with New Hope for Kids to create public relations campaigns to increase awareness of the organization within the Winter Park and Maitland communities. It was such a powerful hands-on experience where we were learning about core concepts while also creating an actual campaign.

I’m excited for my next steps. I really want to go into diversity and inclusion work within public or employee relations for a company or grassroots organization.