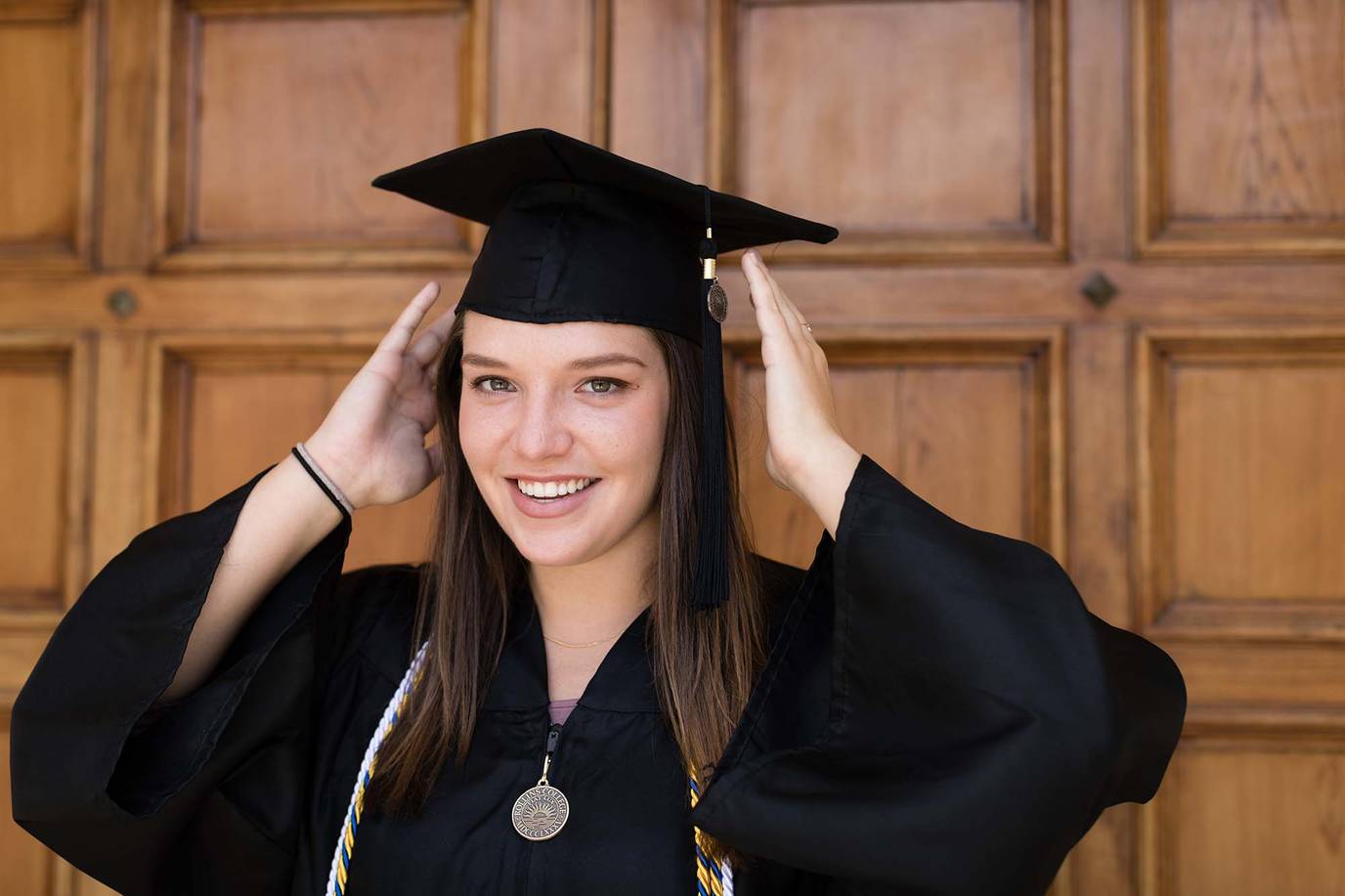 Valedictorian Becca Wilson ’18 reflects on what drove her to excel—in the classroom and on the court.

In 2009, Becca Wilson ’18 saw both her parents lose their jobs to the Great Recession. The same year, cancer nearly claimed her mother’s life.

Keeping things in perspective has never been a problem.

“My family’s struggles have been a constant motivator for me, on and off the court,” says Wilson, an economics major and libero on the volleyball team. “I know how important this is for my future. It was a motivator for me to be successful in school.”

On Mother’s Day, Wilson followed in the footsteps of her sister, Jessica Wilson ’15—also a volleyball player who majored in economics—by graduating as valedictorian. Their mom, cancer-free for six years, joked that she doesn’t know how lightning struck twice.

A native of nearby Winter Haven, Wilson chose Rollins because she wanted her “favorite people” (parents Robert and Julie) to be able to attend her games.

She also wanted a college that struck the right balance between academics and athletics—and it didn’t hurt that, for one year, she’d get to play on the same team as Jessica.

While at Rollins, Wilson served on the Student Athlete Advisory Committee, racked up several defensive accolades on the court, and held a marketing internship at the Orlando City Soccer Club. After taking a break this summer to travel domestically and abroad, she’s aiming to begin a marketing career in the financial services industry.

We recently caught up with Wilson to chat about what she learned during her time as a Tar.

My sister and I learned a lot about each other from playing on the same team. We learned how to separate work from being sisters, and we grew much closer.

My family drives me. They’re my favorite people. I definitely want to make them proud.

It takes a lot of discipline and passion and an open mind to be successful on the volleyball court.The discipline is easy because you have to be at the gym at a certain time, and the passion makes those 6 a.m. workouts bearable. Having an open mind helped me adapt to whatever position my coaches put me in.

Time management is the key to balancing academics and athletics. I learned I couldn’t waste time. I was still able to watch Netflix and go out with friends, but I knew what I had to do and I couldn’t procrastinate. I’m not a huge calendar person, but I did make a lot of lists.

I learned how to lead by example. I was always ready to do whatever it took to be successful, for me and the team.

My position on the team didn’t have to be on the court. When I missed the first six weeks of my senior season because of a knee injury, I became like a coach or mentor to the younger girls.

I didn’t want to have any regrets, so I pushed through all the pain and came back at the end of the season. I knew being on the court would help the team, and the support of my team got me through it all.

Rollins developed me into a more confident and all-around better person.Because of the experiences I’ve had, I’m ready for the real world, both culturally and in my career. Going to Rollins really changed who I am—and who I want to be in the future.

Ken Taylor was one of the hardest professors I had, but he was also my favorite. His Alternative Economic Perspectives course taught me so much, and he had such a passion for everything he was teaching that it was contagious. He has a dry, subtle sense of humor and would just slide in some corny jokes where not everyone would laugh, but I would really enjoy them.

Economics is a way of thinking. We learned a lot of theory, and it changed my way of looking at the world. Being able to see how these global economic interactions occur and how people are affected by that, it’s very cool.

I had an awesome experience with Orlando City. A former volleyball player who works there told me they were looking for a marketing intern, so I interviewed and got the position. I learned so much about marketing and soccer. It was really cool to be at the games and see the fans and the players do what they love.

My favorite place to be on campus was anywhere outside—specifically the dock. I loved sitting out there reading or after a run. It was so peaceful, with such a great view.

Wherever you may go, whatever you may do, have an open mind. And be someone who others can depend on. Say hi to people as they walk by and smile. Just being that friendly person will help you make meaningful friendships.