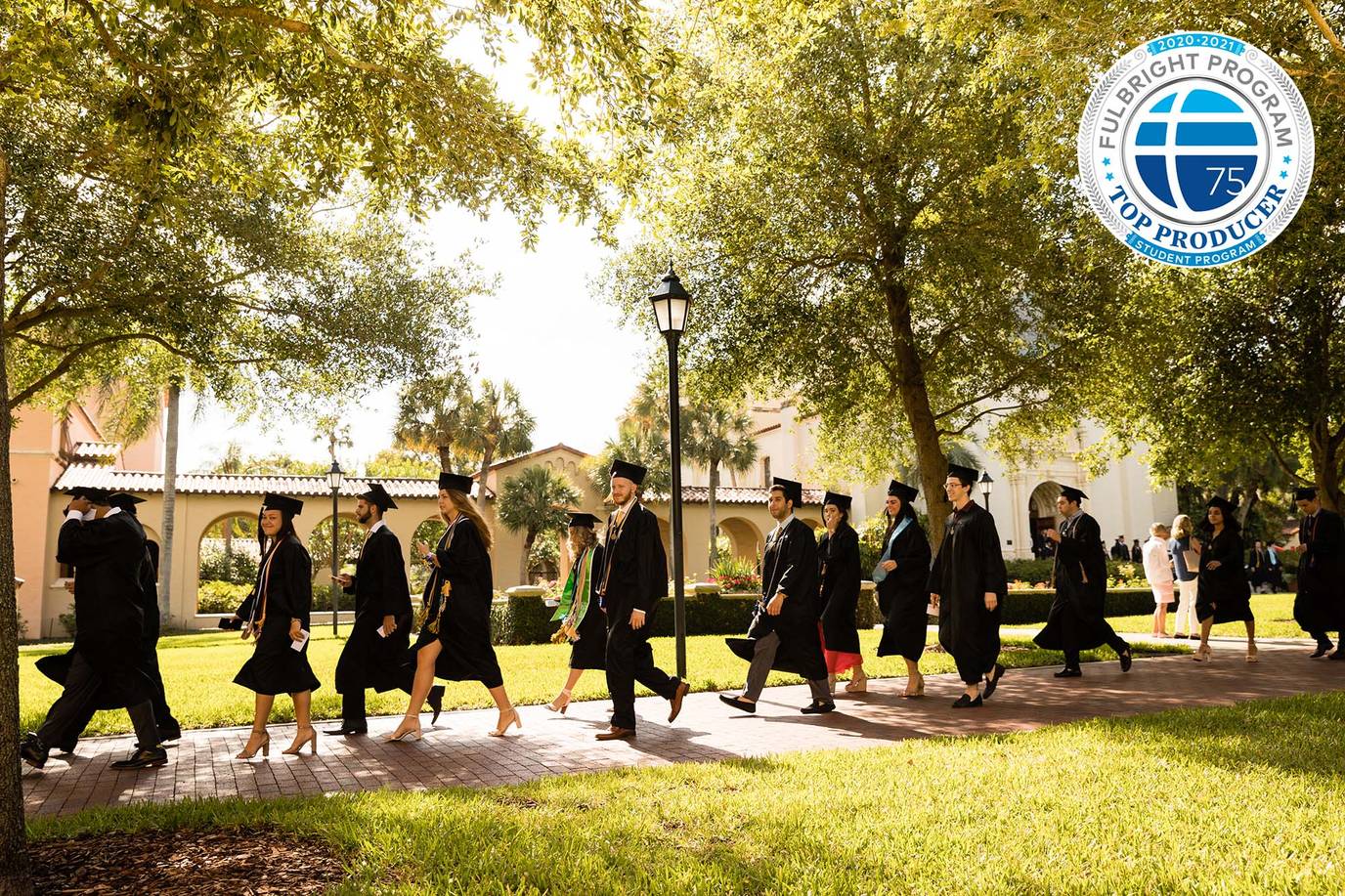 Rollins’ focus on global citizenship, study abroad, and responsible leadership has once again earned the College a spot in the top producers of Fulbright Scholars.

For the ninth year running, Rollins has been named a top producer of Fulbright Students by the U.S. Department of State’s Bureau of Educational and Cultural Affairs.

This year marks the 75th anniversary of the Fulbright Program, which was created under the Truman administration in the wake of World War II to strengthen peaceful relations between the U.S. and the rest of the world through shared experience and mutual understanding. Since then, it’s become the U.S. government’s flagship educational exchange program, with more than 400,000 participants who have served in 160 countries across the globe. Top-producing institutions are named annually in The Chronicle of Higher Education.

Rollins received its first Fulbright in 1951—just five years after the program’s inception. Since then, the College has produced 81 Fulbright Students, with 56 of those named since 2006. That number is a testament to Rollins’ emphasis on global citizenship as a tenet of its signature brand of liberal arts education.

“We are honored that Rollins was once again recognized as a top producer of Fulbright Students,” says Rollins President Grant Cornwell. “We are proud of our students’ continuing success in competing for prestigious international awards such as the Fulbright. Our graduates’ contributions as Fulbrights demonstrate the importance of our mission to educate students for global citizenship and responsible leadership.”

Four recent Rollins graduates were selected to receive 2020-21 Fulbright Scholarships out of thousands of applicants. Unfortunately, the COVID-19 pandemic has waylaid travel plans for the foreseeable future. The program has delayed research awards, which are usually granted in September, to January 2021 and is closely monitoring conditions in each partner country to support students on a case-by-case basis. Winners who wish to delay travel plans further are also encouraged to reapply for the 2021-22 round of awards.

Isabella Braga ’20, Kenzie Helmick ’20, Mirabella Kirk ’20, and Shannon Sullivan ’20 were all chosen to carry on Rollins’ legacy in the program. Kirk planned to travel to Lesotho in southern Africa to conduct research related to HIV education, while Sullivan and Braga had been assigned to teach English in Colombia and South Korea, respectively. Helmick—one of Rollins’ six 2020 valedictorians—was set to study women’s reproductive health issues in India.

Each of this year’s participants cited their previous experience studying abroad through Rollins’ Office of International Programs as an integral part of their decision to apply for the Fulbright. More than 75 percent of the Rollins student body participates in study abroad, and between this year’s four Fulbright winners alone, the study abroad experience would have included assignments in Spain, Japan, India, Chile, and Costa Rica. Other programs, such as Rollins’ Student-Faculty Collaborative Scholarship Program and the U.N. Millennium Fellowship, continue to serve as gateways to the prestigious honor.

“Winning the Fulbright wouldn’t have been possible without the connections and experience I gathered through my student-faculty research with philosophy professor Margaret McLaren,” says Helmick. “That scholarship funded our trip to India, where I gained a lot of firsthand experience doing research. During my time at Rollins, I also studied in Chile, Spain, and Costa Rica. With the flexibility I was given both inside and outside the classroom, I was able to dive into anything that I had even a glint of interest in, and there were resources to support me along the way.”