Ray at the Heart of ‘Disney Love Medley’ 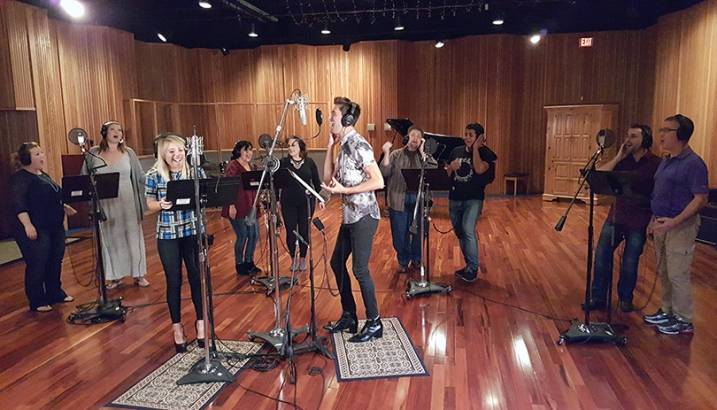 Ray and his a cappella group Voctave recently teamed with Kirstin Maldonado of the Grammy-winning a cappella group Pentatonix and her boyfriend Jeremy Michael Lewis to produce “Disney Love Medley,” which includes “I See The Light” from Tangled, “You’ll Be in My Heart” from Tarzan, and “Go The Distance” from Hercules.

The song was posted to YouTube on Tuesday, February 2, and the web quickly fell in love. By Saturday, the video had received more than a million views.

Ray, who teaches music technology and recording in the Rollins Department of Music, arranged and produced the medley. He also provided backing vocals for Maldonado and Lewis along with Voctave. The group recorded the song in October at Ocoee’s Starke Lake Studios.

Ray approached Maldonado about the project in September after one of his students, Henry Chateauvert ’16, met the platinum-selling recording artist over the summer. After seeing some of Ray’s previous work, Maldonado and Lewis jumped at the opportunity.

This isn’t Ray’s first brush with Disney medley success. His “Disney Fly Medley,” an a cappella arrangement of “You Can Fly” from Peter Pan, “Let’s Go Fly a Kite” from Mary Poppins, and “When I See an Elephant Fly” from Dumbo, was a bestseller on iTunes’ easy-listening charts in 2014. Given the glowing response around the web and Maldonado’s star power, “Disney Love Medley” also appears poised for bestseller status.

Ray’s Disney connections run even deeper. He has performed with the Epcot-based a cappella choir Voices of Liberty since 2011, and his music is performed at the park on a daily basis. Ray’s Disney arrangements and connections even find their way into his music classes.

“I’ll bring a lot those same singers into my classes or for our recording practicum where we record a lot of choral demos,” Ray says. “I’ll bring [Voctave singers] in and put them on a mic with students and let them sing with them, which is kind of a cool experience.”

Ray, who graduated from Rollins in 2006 with degrees in music and computer science, is no stranger to working with prominent artists like Maldonado. His contemporary arrangements have been performed by 30 Rock’s Cheyenne Jackson, American Idol's Diana DeGarmo and RJ Helton, and Broadway performers like Rachel Potter and Christiane Noll.