Photos: Unveiling A Beautiful Day for a Neighbor 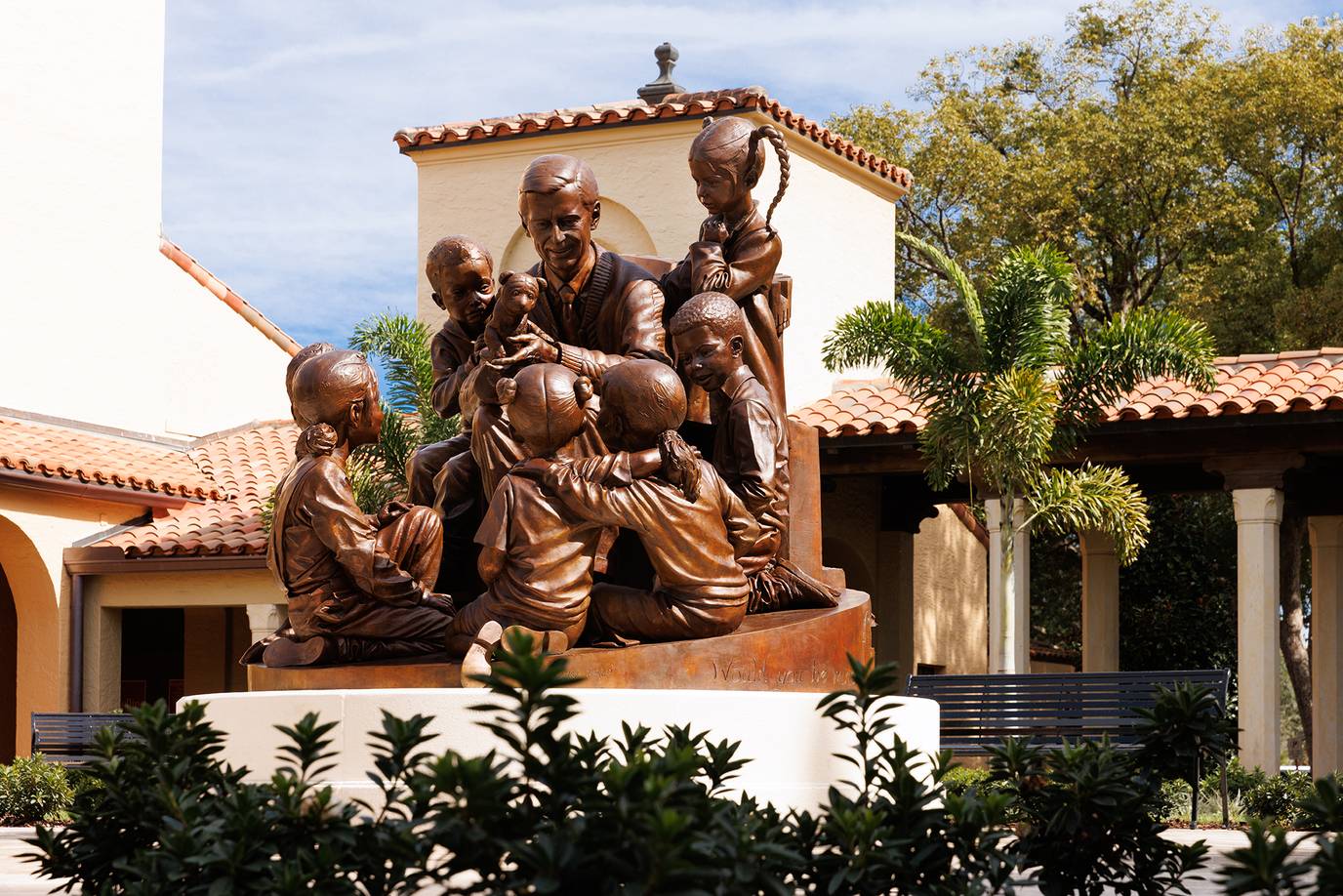 On October 28, Rollins unveiled the long-awaited sculpture celebrating the life and work of our most beloved alumnus, Fred Rogers ’51 ’74H.

Not even a torrential rainstorm could stop the much-anticipated unveiling of A Beautiful Day for a Neighbor, the bronze sculpture created by renowned artist Paul Day honoring Rollins’ most beloved alumnus, Fred Rogers ’51 ’74H. Attendees flocked inside Knowles Memorial Chapel to watch on a large-screen projector as Rollins revealed the moving monument to everyone’s favorite neighbor.

Standing at over 7 feet and weighing more than 3,000 pounds, A Beautiful Day for a Neighbor is fittingly located between the Knowles Memorial Chapel and the Annie Russell Theatre, creating yet another neighborhood on campus where the Rollins community can gather, reflect, and look toward the future with the same sense of purpose, kindness, and optimism as Mister Rogers.

From original musical tributes to meaningful words of remembrance, here are a few of our favorite moments from the afternoon that Mister Rogers became a permanent fixture on campus.

President Cornwell kicked off the festivities by telling the story of Fred Rogers’ deep connection to Rollins, the place where he started discovering his purpose and heeding his call to serve others and build community.

Fred’s son, John, shared his appreciation for how Rollins “loved his parents into being” and invited the audience to reflect on those who’ve helped them become who they are.

Fred’s nephew, Rollins’ music, theory, and composition professor Dan Crozier, composed an original piece of music—Invocation in memory of FMR and SBR—to honor his uncle on this historic day for his family and for Rollins.

Allan E. Keen, who led the Rollins board of trustees in the commissioning of the sculpture, shared the kismet story of meeting Paul Day on a trip to Burgundy, France, as he discovered a connection between the artist and Rollins.

Gertrude Cole Scholar Paul Day regaled the audience with his experience of crafting a monument to such a beloved icon—whom he didn’t know of until the commissioning of this project—and how the relationships he’s now forged at Rollins will continue well into the future.

Led by music professor Jamey Ray ’06, the Rollins Singers performed a musical tribute to Mister Rogers with renditions of “Won’t You Be My Neighbor?” and “It’s You I like.”

The storm clouds finally blew over, allowing everyone to gather around the newly unveiled A Beautiful Day for a Neighbor for many photo ops and much reminiscing.

The front of the sculpture reveals Mister Rogers in his signature sweater and sneakers, surrounded by children and holding Daniel Striped Tiger, a shy, gentle tiger who is equal parts timid and brave.

The back of the sculpture features more of Mister Rogers’ most treasured company, including hand puppets like King Friday, Queen Sara, and X the Owl from the Neighborhood of Make-Believe.

Lyrics from the Mister Rogers’ Neighborhood’s theme song are commemorated along the bottom of the sculpture along with shoe imprints of “143,” a number near and dear to Fred’s heart. He used to say, “It takes one letter to say ‘I’ and four letters to say ‘love’ and three letters to say ‘you.’ One hundred and forty-three.” In fact, he liked the number so much that he maintained the weight of 143 pounds for the last 30 years of his life.

In honor of the sculpture unveiling, Rollins organized a sweater drive for the Boys & Girls Clubs of Central Florida’s Thrift Store, which helps cover key operational expenses across the 36 clubs and serves more than 11,000 children each year.

Perfectly perched between the chapel and the theater, A Beautiful Day for a Neighbor is the anchoring point of a new gathering place on campus, a place where the work and values of Mister Rogers will endure for generations to come.

From courses and programs to pitch competitions and mentorship, Rollins provides students and alumni a network of resources to transform ideas into successful ventures.