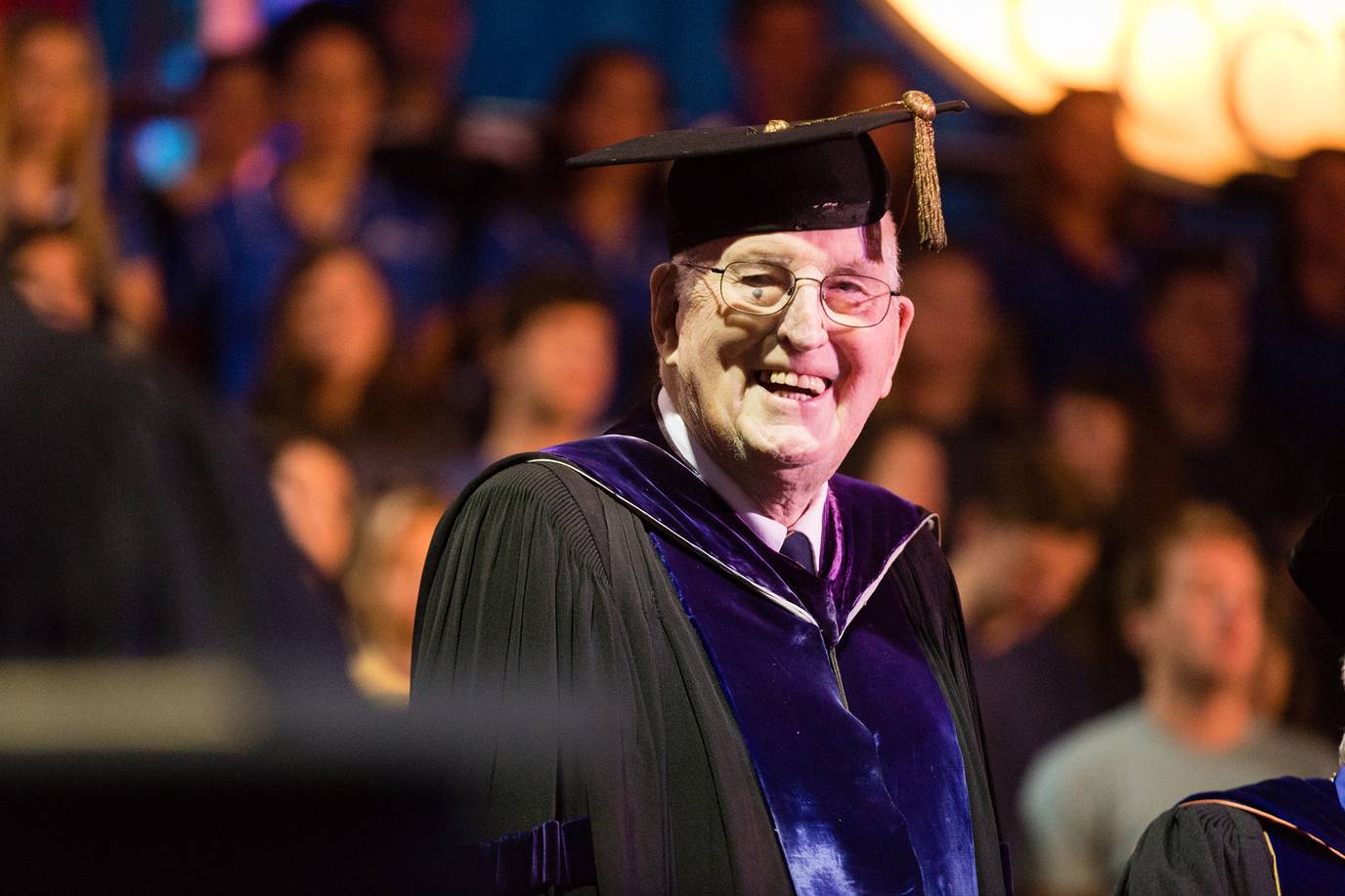 Waiting in the checkout line at Publix stood a giant man with a giant penchant to charm just about anyone he met, in any capacity, at any time.

Introducing himself to the 7-year-old daughter of a friend, “Taddeo the Great” reached down, flashed a big smile, did a little hocus pocus, and poof—pulled a shiny coin from the girl’s ear.

The child’s eyes, her father recalled, “got about as big as that half-dollar.”

Thaddeus Seymour ’82HAL ’90H, Rollins’ 12th president from 1978 to 1990, possessed a genuine brand of magic that touched countless lives, from students and families to faculty, staff, and the greater Orlando community. A beloved campus icon, accomplished magician, public servant, and academic visionary who returned the College to its liberal arts roots—while famously reinstating Fox Day—Seymour died this past Saturday, October 26, at his Winter Park home. He was 91.

“Thad was a great man and a great president,” says Allan Keen ’70 ’71MBA ’10H, a member of the board of trustees since Seymour appointed him in 1989. It was Keen’s daughter, Kristen ’20 PMBA, who pocketed the 50-cent piece that day at the grocery store. “Thad had a bigger-than-life personality,” continues Keen, “and he elevated Rollins to new heights.”

Born June 29, 1928, in New York City to Lola Virginia Vickers and Whitney North Seymour, assistant solicitor general in the Hoover administration and later president of the American Bar Association, Seymour attended Princeton and the University of California, Berkeley as an undergraduate.

A lifelong athlete who hit the gym well into his 80s, Seymour—at a muscular 6 feet, 5 inches—competed in the U.S. rowing trials for the 1948 Olympics.

After earning his master’s and PhD in 18th-century English literature from the University of North Carolina, he taught English for five years at Dartmouth, where he coached rowing and became dean of students at age 30. Prior to Rollins, he was president of Wabash College in Indiana for nine years.

“The Seymour presidency proved to be a turning point in Rollins’ history,” writes Jack C. Lane, emeritus professor of American history and college historian, in Rollins College Centennial History. “At a time when the college community was somewhat adrift, or at best standing still, Seymour instilled in the College a revived enthusiasm and provided a sense of continuity and gave it a new sense of direction. … Rollins, he proclaimed, must ‘return to its roots. Our aim is to know ourselves and to be known by others as the finest small liberal arts college in the Southeast, standing among the finest colleges in the country.’”

Thanks in large part to Seymour’s vision, Rollins has been recognized as the No. 1 or 2 regional university in the South for the past 25 consecutive years by U.S. News & World Report, among numerous other accolades.

In one of his earliest acts on campus, Seymour established a College Planning Committee, chaired by Daniel R. DeNicola, professor of philosophy. After 18 months, the committee produced a 500-page comprehensive plan focusing on institutional mission and structure; divisional objectives; the allocation of funds, physical resources, and personnel; and the 1985 centennial.

Through that lens, Lane writes, “the College began firmly establishing that its identity and future lay with its historical liberal education mission.” Rollins revived its dormant Department of Classics and once again issued diplomas in Latin. To the delight of students, Fox Day returned as well. First celebrated in 1956, the random spring day deemed “too pretty to have class” had been on hiatus since 1970, but Rollins’ new president was more than enthusiastic to revive the tradition in 1979.

During Seymour’s tenure, Rollins considerably raised faculty salaries, rededicated the Walk of Fame, built the Olin Library and Cornell Hall for the Sciences, and renovated Pinehurst Cottage, placing it on the Winter Park Register of Historic Places. Administratively, two of his most important hires were Dean of Admissions David Erdmann and Treasurer Jesse Morgan; together, they helped the College achieve greater financial stability by increasing enrollment, eliminating operating deficits, and overhauling bill collection and investment procedures.

“While the College had historically experienced periods of financial stress, I don’t recall any sleepless nights during his presidency,” says Harold A. Ward III, who served on the board of trustees as a member and chairman while Seymour was in office.

“It was apparent to me from the beginning that working with Thad was going to be both rewarding and a lot of fun. Perhaps it helped that he was part of a family of lawyers, but more likely it was a combination of his remarkable personality and intellect. Another vital part of his presidency was his wife, Polly, who was always involved with the College and the community, and a tremendous support for him and the entire institution.”

Ward described Seymour as a student-centered president adept at winning over constituents from all walks of life: faculty, trustees, alumni, staff, donors, potential donors, and, sometimes, angry members of the community.

“An early challenge,” explains Ward, “was the presentation at the Annie Russell Theatre of the play Equus, which included a scene involving a nude male actor. There were considerable differences of opinion about the appropriate presidential action (or inaction) that should be taken. Thad somehow managed to calm the waters by shifting the focus to the broader issues, such as the desirability of student involvement and freedom of expression. In the end, the play went on, and most of the furor subsided.”

For all his professional and academic talents, Seymour’s most enduring legacy lies squarely in the human domain.

Rollins’ current and 15th president, Grant Cornwell, called him a friend and mentor from the moment they met.

“It was so good to be able to talk about the history of Rollins and current issues with someone who shared a love for the College and profound optimism for its future,” says Cornwell. “I valued Thad as a wise counselor and as one of the kindest, most good-hearted people I have ever known.”

Rita Bornstein, Rollins’ 13th president from 1990 to 2004, always admired how Seymour led by example, whether casually picking up garbage around campus or actively serving the community, most often well outside the media spotlight. When she arrived on campus, Seymour rang chapel bells, posted “Welcome Rita” signs, and threw a party at his home.

“Lion of a man and lion of a president,” says Bornstein. “He thought big, he acted big, and he had big ideas and ambitions. He was ebullient, enthusiastic, kind, generous, fun-loving. He always made me feel optimistic. I think that is true for all who know him. Thad loved ceremony, ritual, history, anniversaries. Often, he engaged the community to participate with the College. He committed himself totally and struggled valiantly to pull and push Rollins to be better and better.”

So Much Left to Give

When Seymour stepped down in the spring of 1990, Rollins’ alumni magazine devoted 16 pages to the president they dubbed “A Man for All Reasons.” Taking a cue from Seymour’s self-deprecating wit, the secondary headline deadpanned, “Being Not an Historical Narrative but Rather an Anecdotal Account of Thaddeus Seymour, Some College President!”

Even though his tenure at the top had come to a close, that didn’t stop Seymour from channeling his boundless energy into serving the College and the community in other capacities. From 1992 to 2008, he returned to his academic roots by teaching English part-time.

Not surprisingly, “retirement” also allowed him to develop close ties with the Winter Park Public Library, serving as its chair from 1996 to 1998 and helping Polly with her favorite volunteer project, the library’s New Leaf Bookstore, now named in her honor. In 1997, the chamber of commerce named the couple Winter Park Citizens of the Year.

Seymour’s altruism carried over into several additional passions, including independent transportation for older adults, the Winter Park Health Foundation, and working to save the city’s historic Capen-Showalter House. His longest-serving volunteer work, however, started in the late 1980s when Hal George ’76, founder and master builder for Parkland Homes, approached him about becoming chairman of Habitat for Humanity’s new Winter Park-Maitland chapter. It was a position Seymour would never relinquish.

“Thad was not a figurehead by any means,” says George, who still serves as Habitat’s president. “He was very involved … the best kind of leader you could have. He rolled his sleeves up and come out to the job sites. He’d bring his family out, and Polly would make curtains for our new families at our dedications. Here’s this big guy with a booming voice who never needed a microphone. He really led with enthusiasm and passion, encouraging people all the way. He was the kind of person who made you a better person just being around him.”

George got a kick out of how Seymour, ever the technology buff, maintained the Habitat webpage and taught him how to use an iPhone. “The first thing he did was load a program that made it look like you were pouring a beer.”

Seymour is survived by Polly, his wife of 71 years, and their four children: Liz, Thaddeus Jr., Sam, and Abigail.

A celebration of Seymour’s life will be held at Knowles Chapel on the Rollins College campus at 2 p.m. on Sunday, November 3. A reception will follow. For those who are unable to attend, the service will be streamed live on the Office of the President website.