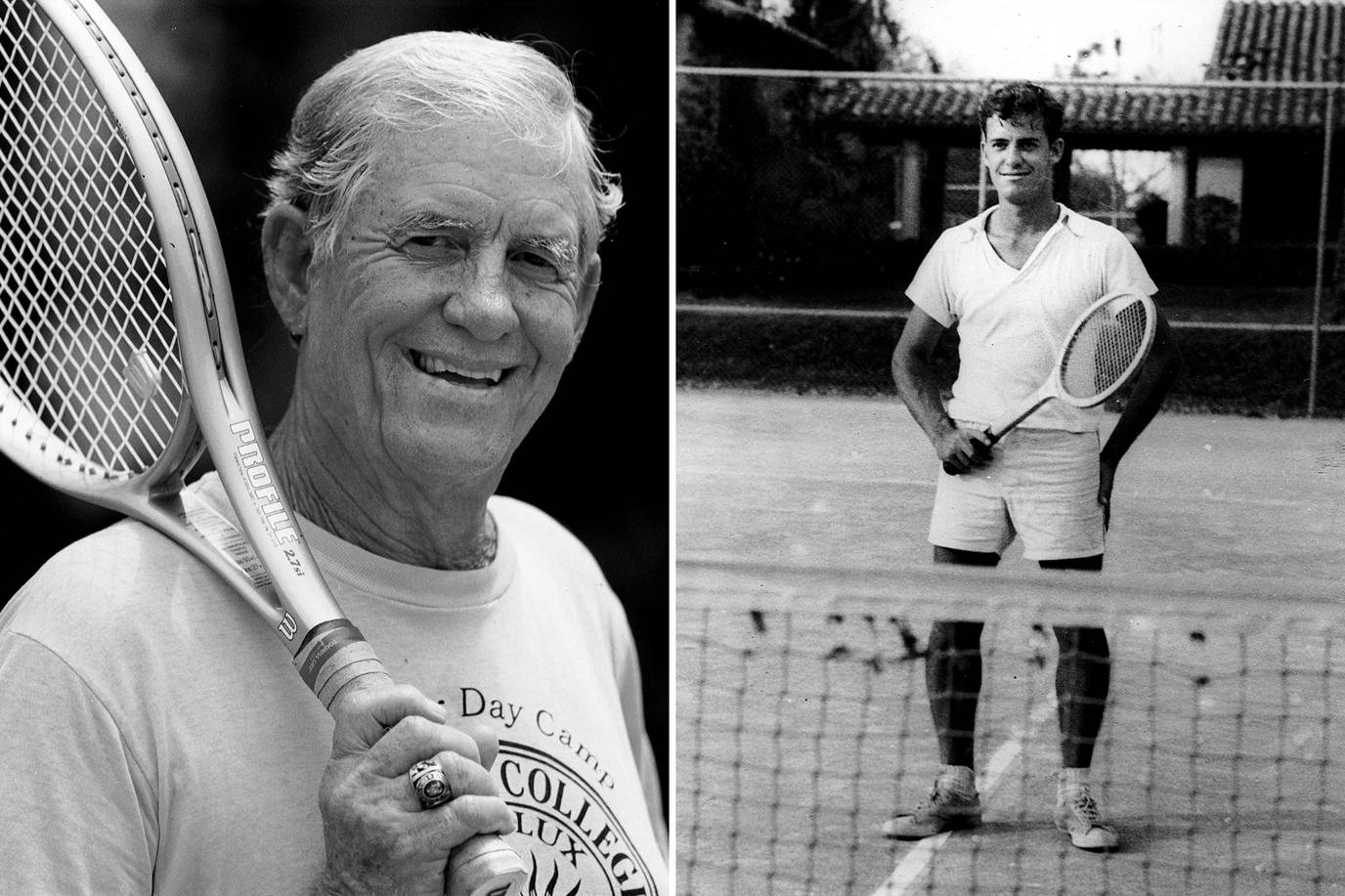 Rollins bids farewell to legendary tennis coach Norm Copeland ’50, whose magnetic leadership style and unmatched accomplishments have left an enduring impact at Rollins and beyond.

Beloved coach and tennis great Norm Copeland ’50—an institution at both Rollins and in the world of college tennis—has passed away at the age of 95.

Born in Daytona Beach, Florida, Copeland started playing tennis at the age of 15 under the tutelage of his older brother. After high school, he enlisted in the U.S. Marine Corps, serving for 2½ years in the South Pacific before returning to the States and enrolling at Rollins, where he became a four-year starter on the tennis team and helped the Tars secure back-to-back undefeated seasons in 1948 and 1949.

After graduating from Rollins, Copeland took his game to the professional tour for two years, ascending as high as 19th in the nation. Following brief teaching gigs in Chattanooga, Tennessee, and Ocala, Florida, he returned to Rollins in 1955 as the head coach of the tennis program. It was a decision that would become a dynasty.

Copeland ushered in a new era of staying power and success throughout his 38 years at the helm of men’s tennis, leading the Tars to 14 straight Sunshine State Conference championships and becoming the all-time winningest coach in NCAA Division II history with 732 dual-match victories. He took the Tars to 28 consecutive Division II national tournaments and three national championship titles in 1966, 1972, and 1991. 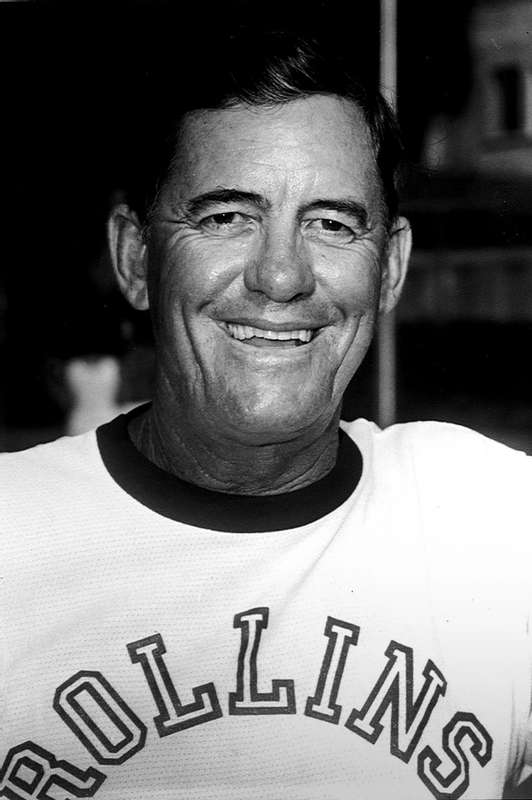 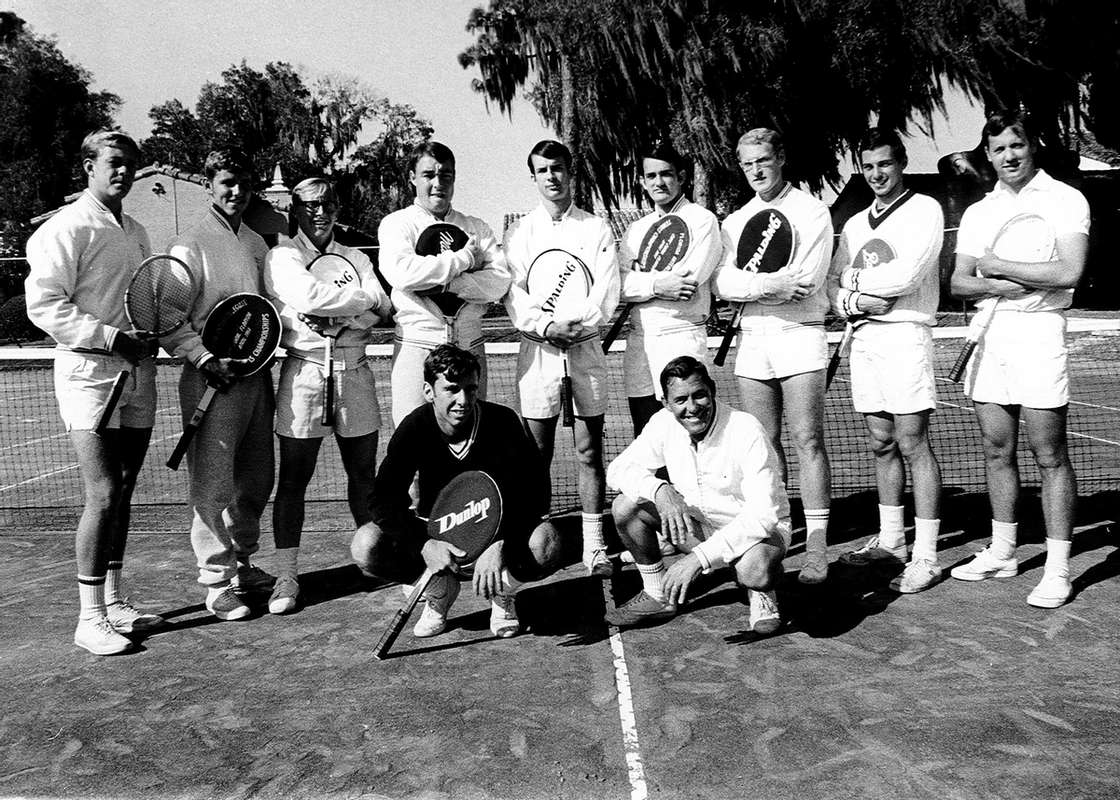 “Norm always believed in tennis redemption,” says Dan Sallick ’91, who played on the 1991 national championship team. “I loved that about him. I had some pretty bad losses over the years, and he could’ve easily written me off. Not Norm. He always believed in second chances. You could see that in his heart—he always had a soft spot for the underdog.”

Copeland embodied hard work, sportsmanship, and an unmatched love of the game, telling the Orlando Sentinel in the early ’90s that, “Tennis is my vocation, my avocation, and my hobby, among other things. It’s the focal point of my life.” It was an energy felt by everyone who knew him and the vehicle through which he taught lessons of perseverance, dedication, and leadership.

“No one had a larger personality on campus,” says Sam Stark ’91, Rollins’ vice president of external relations who played on the men’s tennis team. “His presence we felt and heard, and it centered on his kindness, humor, and love for all things Rollins. On top of that, he was a hell of a recruiter and coach.”

Sallick recalls when Copeland selected him to play doubles with Barry Pelts ’89, who’d won the NCAA doubles title the year before. Sallick felt like he was in over his head, but Copeland told him he deserved to be there.

“Norm was coaching even when he wasn’t coaching,” says Sallick. “He knew how to build my confidence and taught me that both tennis and life are full of disappointments, challenges, and setbacks, but if you stay in the game, great things can happen.”

During Copeland’s tenure, the Tars dominated the Sunshine State Conference, ranking in the top 10 for Division II teams for 28 straight years and finishing in the top 5 nationally 11 times. His last team before he retired in 1993 finished third in the country. A legendary coach who trained two individual national champions, three doubles national champions, and more than 30 All-American student-athletes, Copeland is enshrined in the Rollins and SSC Halls of Fame.

Former player and current women’s tennis coach Bev Buckley ’75 was just getting started as Copeland was wrapping up his legendary run.

“When I’d head over to the Tiedtke courts for practice, Norm would always yell out, ‘Here comes Buck,’” she says. “He made everyone feel welcome at the courts. He also had a great sense of humor and was very good-natured, but at the end of the day he was one of the toughest competitors I’ve ever known.”

Stan Aranda ’78 also remembers Copeland as a fierce competitor whose ability to execute his game plan was his greatest talent and whose infectious smile and optimism were a model for how to live.

“Norm’s attitude and charisma are what impacted my life the most,” says Aranda, a top-ranked player who thrived under Copeland’s leadership. “He always had a kind word and treated everyone with equal respect. He truly led by example. Norm wasn’t just my college coach, but my life coach and dear friend for 55 years.”

In the game of life, match point most certainly goes to Norm Copeland—a much-admired leader, mentor, colleague, and friend who left it all out on the court.

How did Norm make a difference in your life? Share your favorite memory of Norm or pass along your favorite lesson learned from the national championship coach by filling out this form. We’ll collect your stories and build a lasting tribute to Norm for the entire Rollins community to enjoy.

Those wishing to make a gift in Norm’s honor can give to the newly named Norm and Bucky Copeland Memorial Fund, which was originally established upon the death of Norm’s son in 1981 as a way to support student-athletes participating in tennis. Visit rollins.edu/give and select “other” to write in the name of the fund.