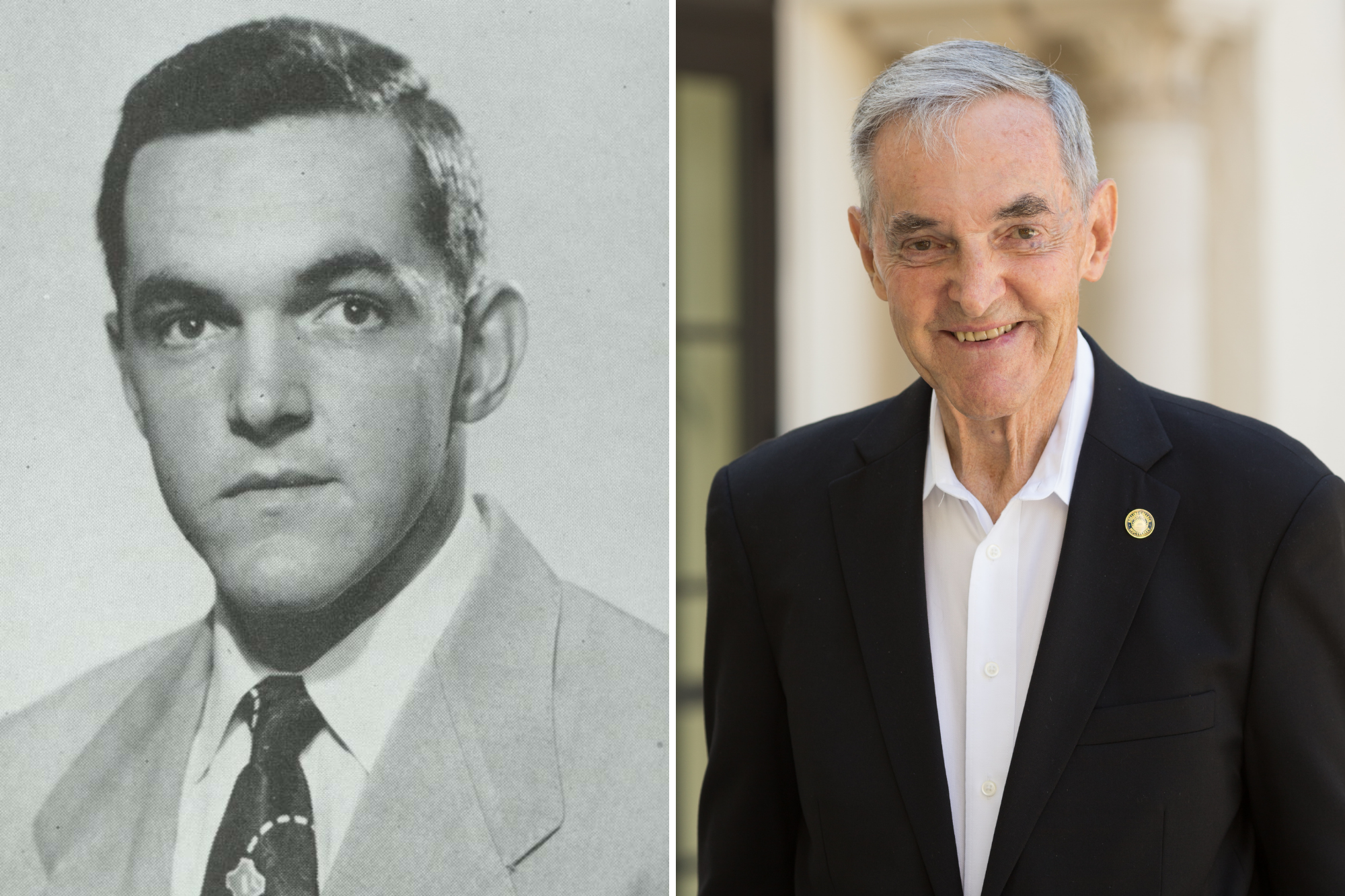 Rollins honors the legacy of Frank Barker ’52 ’06H, whose contributions to the College as a caring graduate, Hall-of-Fame athlete, and student-focused trustee will endure indefinitely.

Every morning Rollins President Grant Cornwell and his wife, Peg, wake up in the president’s residence known as the Barker House.

“We think often about who’s behind that name and what they mean to Rollins,” says Cornwell. “Think about the definition of ‘alma mater’: it’s ‘nourishing mother.’ Your alma mater forms you. So you should respect your alma mater. Look how Frank Barker treated her.”

When Barker passed away on July 30, 2021, shortly after his 91st birthday, the loss hit the Rollins community hard.

“Frank cared deeply about the students,” says Allan Keen ’70 ’71MBA ’10H, Rollins trustee and twice chairman of the board. “He was a positive force for them.”

Born in Jacksonville, Florida, Barker attended Jacksonville Junior College (now Jacksonville University) before transferring to Rollins, where he majored in business administration and starred on the Tars’ baseball and basketball teams. He has the rare distinction of being inducted into the Athletic Hall of Fames at both colleges. On February 16, 1952, Barker scored 50 points against Green Cove Navy, a Rollins record that still stands.

“He would tell me about that game and say, ‘The team had a great night,’” says Craig McAllaster, former dean of the Crummer Graduate School of Business and former acting president of Rollins College. “That’s the kind of servant leader he was.”

Barker would use his leadership skills to serve as an infantry officer in the U.S. Army and as a captain in the Florida National Guard until 1966. By then, he had already begun rising through the corporate ranks at Johnson & Johnson, where he ascended to company group chairman. There, he championed the concept of “wellness” long before it became mainstream and counted the launch of the Johnson & Johnson Health Management Company among his most important business successes.

But the turning point in Barker’s life happened while he cleaned tables in the student cafeteria at Rollins. That’s where he met an economics major and women’s basketball player, Daryl Stamm ’53, who would watch Frank work until closing time. Frank and Daryl would be married in 1953, the beginning of a 66-year marriage before Daryl’s passing in November 2019.

“They had a big heart for Rollins because this is where they fell in love and eventually started a family [a son, Bruce, and a daughter, Doane],” says President Emerita Rita Bornstein ’04H ’04HAL. “It’s why their legacy is everywhere on campus.”

Look around and you see the Barker House, Barker Family Stadium, the Barker Lobby in the Bush Executive Center, and Daryl’s Fitness Center.

“Frank wanted to make sure everyone on campus—not just the student-athletes—had access to places where they could tend to wellness,” says Pennie Parker, Rollins’ director of athletics. “Barker Stadium houses four sports [men’s and women’s soccer and lacrosse], but it was just as important to him that it’s home to intramural and club sports. More than half the students at Rollins are involved in a sport now largely because of the facilities. It’s what Frank had in mind all along.”

During one of his many visits, Barker thought the flagpole at the center of campus should be more impressive. The stunning flagpole there now is courtesy of Frank Barker.

“Whenever he and Daryl contributed, they did it to fill a need that otherwise would be overlooked,” says Bornstein.

Barker quietly funded scholarships and made sure there was adequate financial aid available. He also mentored students interested in leadership and business.

“Frank was extremely proud to know our graduates could go to New York City and be at home with business executives from Wharton,” says McAllaster.

Students and trustees listened to Barker because of his homespun way of telling stories, his 6-foot-5-inch frame, his experiences, and his genuine concern for students.

“During one board meeting, someone mentioned that the New York Times was going to be delivered to students,” remembers Keen. “So, Frank said, ‘OK, I’ll make sure they also get the Wall Street Journal to balance it out.’ He was never overpowering, although when he joined the board [serving from 1996 to 2021 and chairing for three years], Frank was already close to being a legend.”

Into his late 80s, Barker still kept an eye on the well-being of current and prospective students.

“He became very interested in mental health,” says Susan Johnston ’75, current board chair. “Even as he struggled with his own physical illness and his wife’s passing, he’d ask if the students had enough access to counselors and how we would manage the growing need. We’ve done a lot more to support mental health in large part because Frank got us all behind it.”

From the Barker House, Cornwell talks about the namesake’s understanding of how to make a meaningful, long-term difference.

“I believe throughout his life Frank chose to serve institutions that reinforced his values and integrity: his country, his church, his business, and this college. He’ll be missed tremendously.”