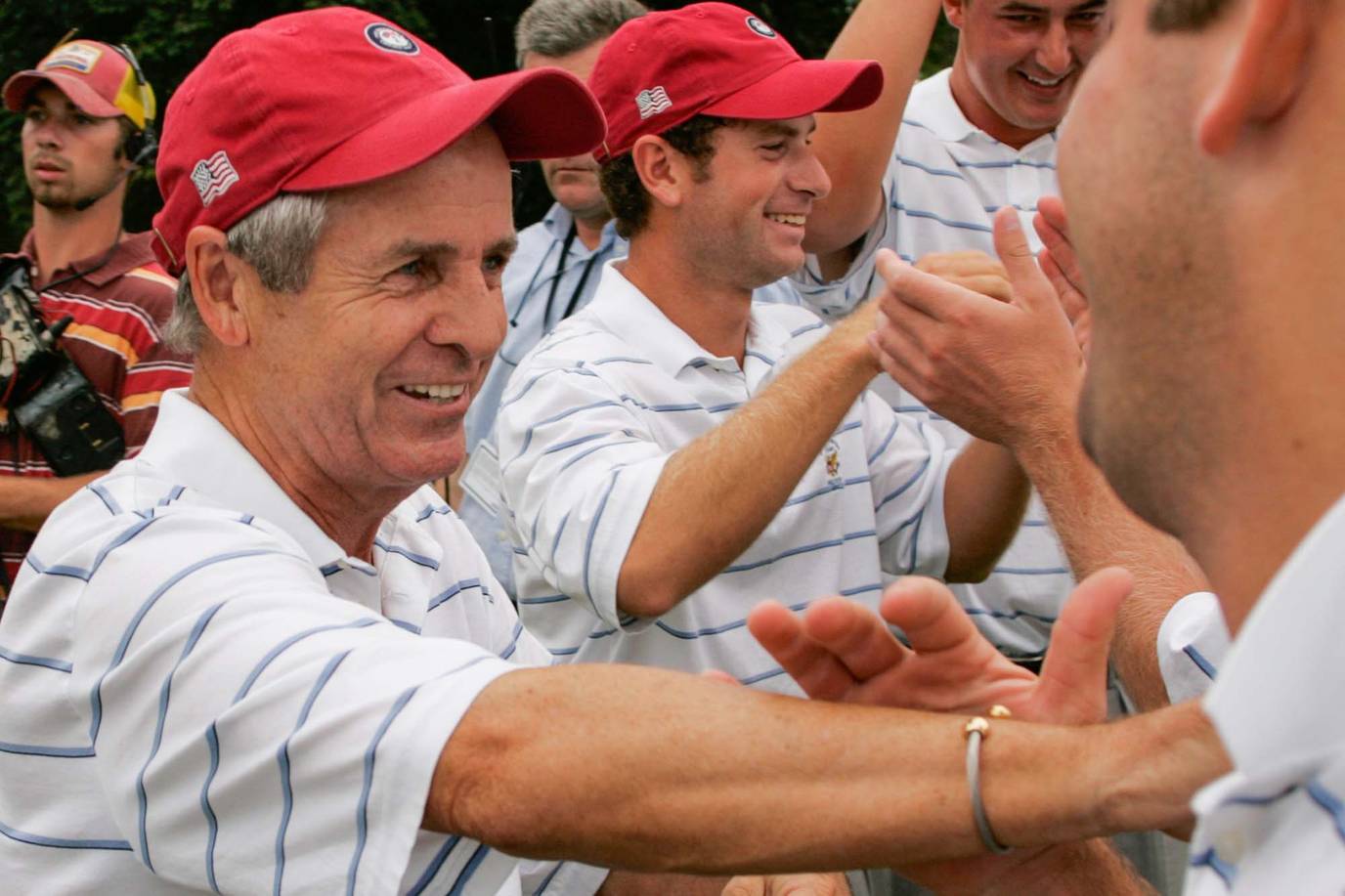 One of Rollins’ greatest golfers, Bob Lewis ’67 ’69MBA, passed away March 23 shortly after receiving one of the sport’s most coveted honors.

After spending four years on the PGA Tour in the 1970s, Lewis played amateur golf at its highest levels for more than four decades. He represented the United States in two World Amateur Team Championships, including a victory in 1982. His career culminated in February 2021 when he received the Bob Jones Award from the United States Golf Association, recognizing individuals who epitomize “the spirit, personal character and respect for the game.” Lewis joined the likes of Arnold Palmer, Jack Nicklaus, President George H.W. Bush, and Annika Sorenstam in receiving the distinction, given out annually since 1955.

“When you talk about the tradition of excellence of Rollins golf, certainly Bob Lewis is chief among the pillars of the game that we were honored to have within our campus community,” says Julie Johnson Garner, director of golf and head women’s golf coach. “His presence here brought other great golfers to Winter Park, and that path continues today. He will be sorely missed.”

Robert C. Lewis was born in Warren, Ohio, on July 12, 1944, to a businessman father and a golf-aficionado mother who carried a handicap index of 1. She encouraged her son to take up the sport. After enrolling at Rollins in 1964, Lewis walked on to the golf team, going on to become college all-American and to lead the team as captain.

At Rollins, Lewis was known for blending fierceness on the links with remarkable sportsmanship and diplomacy.

“He was our best player for sure,” says Terry Law ‘67, one of Lewis’ teammates with whom he played in the NCAA University Division Golf Championship. “Our coach tracked greens hit and putts taken,” recalls Law recalls. “Fifty-four years after the event, I still remember Bob played 72 holes with 119 putts. He was tough.”

Lewis graduated from Rollins with a degree in economics in 1967 and won the 1968 Ohio Amateur on his 24th birthday. In 1969, he completed an MBA in finance from the Crummer Graduate School of Business. The same year Lewis won the Cleveland section of the PGA Match Play Championship.

He qualified for the PGA Tour in 1970 and won the Bob Hope of Tomorrow Tournament in Palm Springs in 1972. Lewis played pro for four years before leaving professional golf to join Welded Tubes, Inc., the Ohio steel manufacturing company launched by his father where he would ultimately become president and CEO. In 1978, Lewis was reinstated as an amateur golfer, becoming the first since Jack Nicklaus in 1957 to win the Ohio Open. In all, Lewis played in 31 USGA championships, three times as a runnerup.

Over the years, Lewis maintained his connection to the College, including participating in his 50th reunion. He was inducted into the Rollins Sports Hall of Fame in 1986.

“Lewie was a very good golfer, a friend, a gentleman, honest as the day is long, and a great competitor,” says John Kirouac ‘68, a fellow Rollins golfer.

William Bieberbach ’70 ’71MBA recalls how Lewis let him inside the ropes on a practice round with famed golfer Seve Ballesteros at the Masters Tournament. Lewis played in seven of them, including as low amateur in 1987.

Thoughout his life and career, Lewis was active in numerous charitable organizations in Ohio, including supporting Catholic education opportunities. His volunteer work included serving as head coach at the Gilmour Academy day school and sitting on the board of Boys Hope Girls Hope, which serves at-risk youth.

Perhaps his biggest accomplishment and what he will be most remembered for was serving as captain of the U.S. Walker Cup team during two consecutive tournaments. Golf Digest credits Lewis with helping reignite America’s passion for the Walker Cub after he led the team to a win against Great Britain and Ireland in 2005.

“I’m very emotional and really at a loss for words,” Lewis said at the time. “It’s the way you dream about going out as a captain. To win this for these guys, my name’s on the trophy a lot of times, but I didn’t care about me—I wanted these guys to win this. It’s a phenomenal record.”