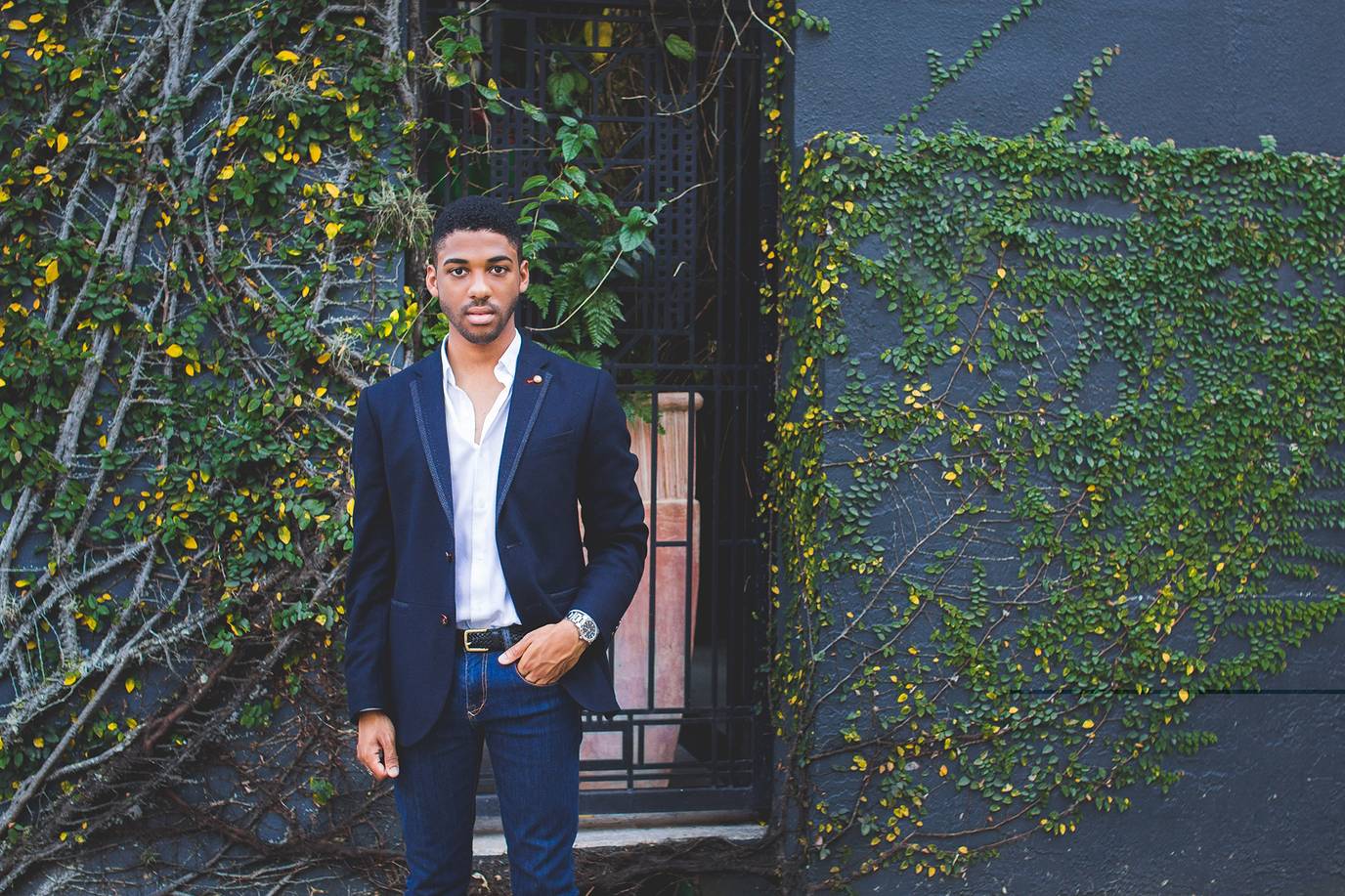 How Phillip Denizard ’16 turned a simple class project into a career at one of the world’s top fashion brands.

Phillip Denizard ’16 is somewhere in Manhattan, looking for a quiet alley to dart into to escape the Thursday night clamor. He’s tired, he says. Work is overwhelming. Long hours. Tons of travel. A to-do list that doesn’t quit. Never a moment to relax.

Denizard is an assistant buyer at Gucci, a position in which he helps coordinate the luxury fashion brand’s products at 98 stores. It’s as fast-paced a gig as they come, but Denizard is accustomed to hustling. After all, hustle is how he got here. It’s how the communication studies major turned a simple class project into a mentorship with a high-powered fashion executive. Hustle is how that mentorship yielded a pair of high-profile internships, and it’s how those internships landed him a career in one of the fashion capitals of the world.

The mentor was Stacy Van Praagh ’93, a former president of Fendi and global vice president of Oscar de la Renta, who also sits on Rollins’ Board of Trustees. It was Van Praagh who opened doors for Denizard into the world of luxury fashion—but only after he proved that he was committed to the work. And willing to hustle.

You were a communications major at Rollins. What drew you to fashion?
I’ve always enjoyed fashion personally in terms of my sense of style and what I wear and what it says about me and the message it conveys. Earlier on, I wanted to be an actor. But eventually I got to the point where I was going to have to decide whether I wanted to move to L.A. and try to pursue it further or get my degree. The degree won. With that, I had to choose a major. Everyone always told me, ‘Phillip, you should work in fashion.’ So I thought I wanted to be a VP of communications and marketing for a fashion house, which is why I chose PR.

How did Rollins help prepare you for this field?
There are so many courses I could discuss, but I’ll limit it to just a few, the first being my listening class with Dr. [Rick] Bommelje. It is such a simple idea—the ability to critically listen and understand what is happening in a communication exchange—but it’s so important to anyone’s success, I think, regardless of industry. It’s so valuable and it helps me determine how to communicate better with people who don’t communicate the way I do. Dr. [Ted] Gournelos gave us very real projects. Very big, very real projects, where we had to function as professionals and do very exciting and relevant things. We weren’t just reading about our industry. For my last project with him, I created a marketing plan for Burberry’s foundation, which focuses on improving education for children in the U.K.

You were a PR intern at Feeding Children Everywhere in Orlando while you were a Rollins student. Tell us about that.
That internship actually led me to the business of fashion. It was a small organization, so I had an opportunity to use my education and my ideas to impact their communications. I dealt with everything, from social media to massive banners at events. They knew I was interested in fashion, so they also allowed me to work on their merchandise. By the end of the internship, I was solely responsible for planning all of the merchandising for their events. It was a PR internship that evolved into a merchandising internship.

After Feeding Children Everywhere, you went on to three other internships. How did those internships help you?
Bradbury Lewis, the PR firm in New York, came after Feeding Children Everywhere. I learned a lot while I was there. Fashion PR is so different than every other kind of PR. Then after that, L’Eclaireur. Stacy [Van Praagh] knew I was studying abroad in Paris, and she knows the owners of L’Eclaireur, so she connected me with them and they offered me an internship. That was my first real fashion-merchandising role. After graduation, Givenchy offered me an internship in New York. That was a humbling experience because ‘I have my degree, I’ve worked really hard, I’ve had all these internships already, and I have to have another one?’ But everyone let me know, ‘Phillip, this is going to be it.’ It turned out to be the best internship of my career.

How did your mentorship with Stacy come about?
To be honest with you, it really just started with me introducing myself to her as a student at Rollins interested in fashion. Later, I had a project where we interviewed someone who was doing what we wanted to do, so I asked to interview her. She gave me so much of her time and the conversation was so sincere and pleasant that I asked if she would consider being my professional mentor. She said absolutely.

Was it difficult to forge a relationship with a high-profile executive like Stacy?
I won’t say it was easy, because when you have a mentor who is already so accomplished you have to prove yourself. You have to treat the relationship very responsibly, respect their time, show them how much you care, that you’re willing to do everything they say and listen to every word and every silence. She’s an executive, a mom, a wife, and a trustee, so she has a lot going on, but she’s incredibly generous. It wasn’t hard for the relationship to develop with me asking questions and being sincere. My life was moving quickly, and I think she really respected and appreciated that. And when I say my life was moving quickly, I was doing the things I said I was going to do and I was very committed to them. And so with my commitment, she also became more committed.

Ultimately, what do you think you got from the mentorship?
I think she and I would both say the opportunities, because she put me in contact with L’Eclaireur and Givenchy and ultimately Gucci. When she was the president of Fendi, she brought on the current VP of retail at Gucci, and so when I told her about this Gucci job, she so kindly forwarded my resume to him directly, and from there it made its way to who it needed to. But without that, I mean, a resume at Gucci …

Speaking of Gucci, what’s life like as an assistant buyer at one of the world’s biggest fashion brands?
In general, for any fashion house, you have a buyer and an assistant buyer. A buyer chooses the product for a store in a given region or in the entire world. When choosing that product, they’re responsible for the management of inventory from the moment you place that order down to putting it on markdown so we can sell it. As an assistant buyer, what that looks like is helping the buyer and making those business decisions by analyzing sales in each market, figuring out how each product is performing based on demographics, locations. And then, just kind of like staying ahead of the game with the inventory. I do a lot of stock rotations to make sure the product is fresh and that it’s being seen by new people in different locations. And there’s a bit of a creative component where you partner with design to let them know what the next season should look like.

Where do you see yourself in five or 10 years?
I see myself still heavily associated with fashion. There is not a 100 percent chance that I’m still going to be in buying. It’s exciting but I want more. I have a stronger creative side than just business analysis, and I’ve always been somewhat entrepreneurial. Eventually, I’d like to partner with a developing luxury brand and really take it to the right market and make it something amazing. I think brands today have a great potential for combining fashion and media, and I’d like to see what that could look like with the right partnership.