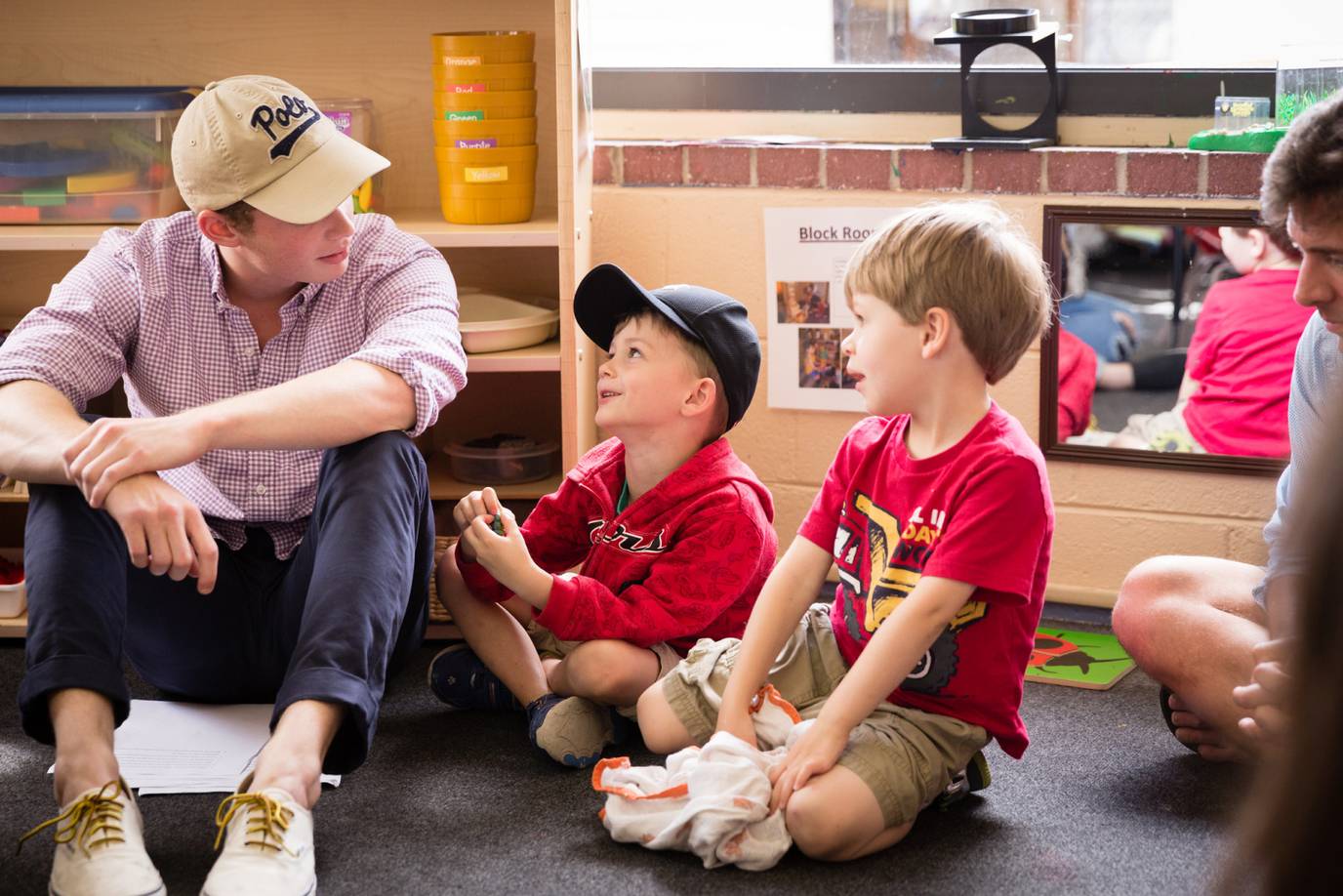 How do you get a 4-year-old to engage in abstract discussion? Can gingerbread houses serve as a vehicle for communicating the utilitarian ethic of collective happiness?

Teaching philosophy to a group of preschoolers might seem like an exercise in futility, but Rollins students are finding that—given the right methods—young minds have great capacity to grasp complex concepts.

Course Title
Over the past three semesters, this introductory philosophy course has been taught under various names: Socrates and the Art of Living (spring 2015), Philosophy for Kids (fall 2015), and Revolutions of the Mind (spring 2016).

Description
Kids are imaginative and love to ask questions. In a word, they are natural philosophers. What they don’t do well is follow through with their questions in groups.

Enter students in Kenyon’s class. Using storybooks, art projects, games, and group activities as a springboard, they help children ages 4 to 11 conduct their own philosophical discussions—from why sharing is good, to formulating opinions on everyday ethical issues.

Kenyon compares his hands-on curriculum to an experiment that is being constantly tweaked, based on previous outcomes.

“Preschoolers won’t sit for too long until they start squirming on the floor and losing interest,” he says. “So the more tactile, the better. For example, if you go from an activity (like reading Dr. Seuss) to an art project (like painting a dilemma posed by the book), it resets their attention clock and you can get them to discuss things in a meaningful fashion.”

Snapshot
In late March, we stopped by the CDC on a day when English major Edwin Davis ’18 led a session attended by Mount Holyoke College professor Thomas Wartenberg, a pioneer in teaching philosophy through children’s literature. Much of the course is based on principles outlined in Wartenberg’s book Big Ideas for Little Kids.

Davis and Kenyon planned a lesson based on building a model Hume House (the CDC's new building under construction) out of graham crackers, icing, and candy.

“The activity itself did not go entirely as planned,” Davis admits. “The children did not choose to build model Hume Houses or, honestly, even houses for that matter. Rather, each child worked individually to begin with, pursuing their own creations. One made a sandwich, another made a garage (or at least the roof of one), and one girl mostly ate icing off her fingers.

“Despite this, they still arrived at all of the teachable moments I could have hoped for. There were opportunities for sharing, working together, and building the house vs. eating the candy it was made out of. The lesson was fun and lighthearted. The kids spoke freely and openly and, once again, exceeded my expectations with what they had to contribute.

“The little girl who was eating the icing ended the lesson by saying, ‘It's happy when everyone is happy!’ If John Stuart Mill had written his essay on utilitarianism as a 4-year-old, I think that's exactly what he would have to say.”

Student perspectives
Bryan Bailey ’19, psychology major and philosophy minor, says interacting with the children “had a profound impact on me as a new Rollins student. It also made me a better person and gave me something to look forward to whenever I have kids of my own.”

Rachel Wasserman ’19 chose to major in philosophy upon taking Kenyon’s class. “After many philosophy sessions at the CDC,” she says, “a 3-year-old asked, ‘What is philosophy?’ It was then that I realized we really had accomplished something.”

Fun fact
Picture books are an excellent way to raise philosophical issues with children. Wartenberg points to Leo Lionni’s book Let’s Make Rabbits as an example, as it “raises questions about how we know that something is real.”

Doing philosophy with children, Wartenberg continues, improves their verbal skills and builds a sense of community in the classroom. “They learn to listen carefully to other students, to formulate their own opinions in a clear manner, and even to defend their opinions against objections from their peers.”