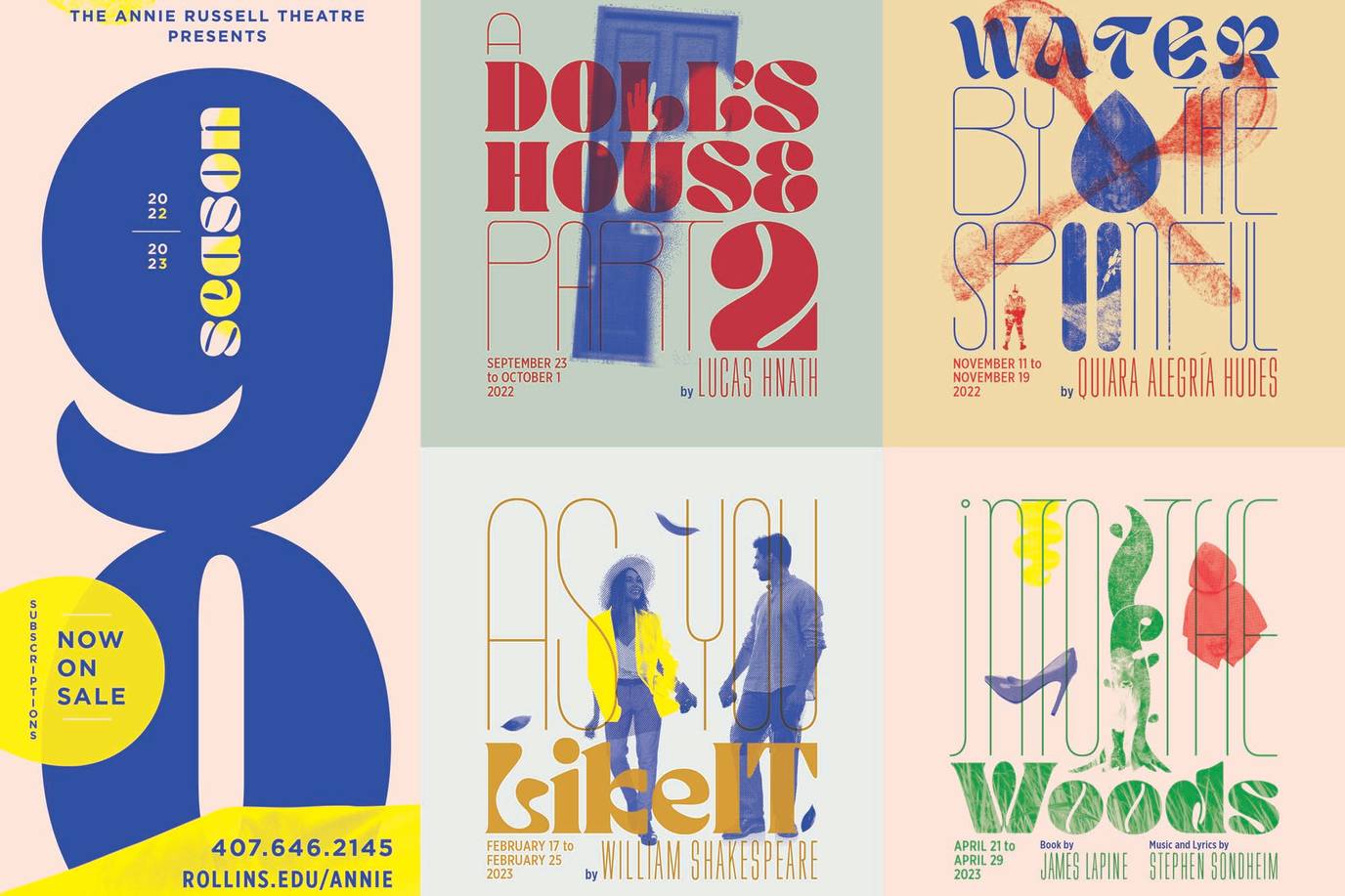 Celebrating 90 years of performance and theater education, the Annie announces its 2022-23 season with a showstopper lineup.

Rollins’ historic Annie Russell Theatre is poised to celebrate its 90th season, making it the oldest continually running theater in Central Florida. This landmark season will bring audiences a mix of new and old shows highlighting the best of the departments of theatre, music, and dance.

Gifted to the College in 1931 by philanthropist Mary Louise Curtis Bok Zimbalist and bearing the name of famed British-American stage actor Annie Russell, Rollins’ beloved theater features stunning Italian Romanesque Revival-style architecture evoking the golden era of stage performance. Russell herself taught at Rollins, and in 1932, she opened the Annie’s first season with a performance of In a Balcony. Since then, thousands of Tars have graced the iconic stage.

This year, Rollins broke ground on the all-new 16,000-square-foot Tiedtke Theatre & Dance Center, which will include a state-of-the-art set and costume lab, practice spaces, and a 1,900-square-foot black box theater. The new complex will be situated adjacent to the Annie and serve as a complement to the historic building. The Annie will continue to serve as the Department of Theatre & Dance’s main stage.

“As I approach 30 years at Rollins, I’m honored to produce the venerable Annie Russell Theatre’s 90th birthday season,” says theatre professor Thomas Ouellette, producing director of the Annie. “This milestone offers a chance to look back with pride, to celebrate the artists who grew so much, gained so much, gave so much. And it’s a time to look ahead with promise.”

From Shakespeare to Sondheim, the 2022-23 season offers something for everyone. Here’s a preview of what’s coming to the stage during this monumental year of celebration.

Henrik Ibsen’s groundbreaking masterwork A Doll’s House ends with a slamming door, one that promptly propelled world drama into the modern age. Protagonist Nora walks out on her husband, her family, her life. But, what if, many years later, there’s a knock at that same door? You need no familiarity with Ibsen’s 1879 work to enjoy Hnath’s gripping, riotous, and incendiary play, which explores themes of society and gender.

Water by the Spoonful

Water by the Spoonful begs the questions: In an age of uncertainty and chaos, can anger become forgiveness and can resistance become redemption? The provocative and uplifting winner of the 2012 Pulitzer Prize for drama follows the story of an Iraq war veteran as he returns home to Philadelphia.

Written during the early years of the 17th century, Shakespeare’s pastoral comedy follows lovestruck exiles Orlando and Rosalind as they embark on a hilarious romp of love and mistaken identity. Shakespeare gleefully abandons all historical or geographical accuracy, but the manifold improbabilities matter little because, hey, “All the world’s a stage.”

What happens after happily-ever-after? Long considered to be one of Sondheim and Lapine’s finest collaborations, this beloved musical weaves together the stories of well-known fairy tale characters with a darkly comic modern twist. The Department of Theatre & Dance will present Into the Woods as a co-production with the Department of Music.

The Department of Theatre and Dance will also present Expressions Dance Concert in December and three titles as part of their student-directed Second Stage Series.

The Half-Life of Marie Curie

Subscription packages for the Annie’s 90th season are on sale now with discounts available for seniors, students, and Rollins alumni.