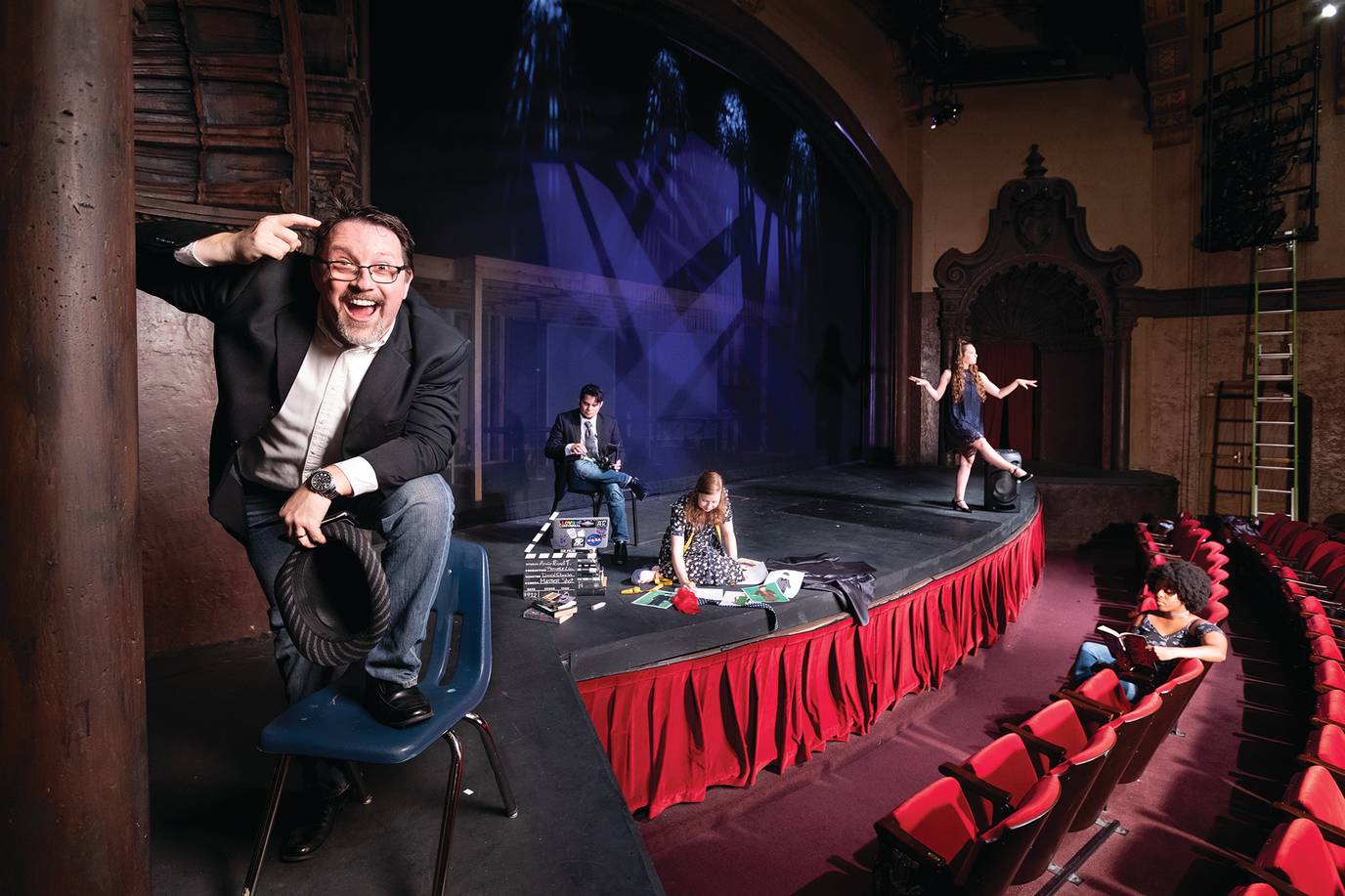 It sounds counterintuitive, but 14 Rollins students spent the summer researching how best to stage an improvised play.

Don’t let the “improv” part fool you. Plenty of prep went into this production—and it all started this past summer with the Student-Faculty Collaborative Scholarship Program (SFCSP), now in its 20th year at Rollins.

Well before casting began for November’s Private Lies: Improvised Film Noir, theatre professor David Charles worked alongside 14 students from a variety of majors to research every aspect of the original play, from early 20th-century culture to depictions of cops and mobsters on the silver screen.

For two months, 30 to 40 hours a week, they developed a blueprint for the show. In the mornings, it was theory and dramaturgy. Afternoons called for scenic dynamics and testing on the Annie Russell stage. Months later, each audience literally made the final product their own.

Charles, an improv performer himself, has partnered with students through SFCSP to create four other original Rollins plays in the genre. The experience has helped many student collaborators go on to successful careers, including SAK Comedy Lab’s Chelsea Hilend ’10 ’18MBA and Ana Eligio ’09, freelance director Rob Yoho ’10, Orlando Fringe Festival’s Travis Ray ’11, and Emily Steward ’14, who teaches improv in Hawaii.

The Maltese Falcon. Sunset Boulevard. Ken Burns’ Prohibition. These were a few of the visual learning tools students drew upon to immerse themselves in film noir. Private Lies is set in 1932 in a Gotham-style city modeled on Chicago and New York, so students had to dive into areas like Prohibition, jazz, and crime and punishment. “I was able to plunge into the subject and learn what makes film noir the art form it is and why the filmmakers made certain choices,” says theatre major Emmi Rubick Green ’20. “It’s truly been a journey through the liberal arts.”

Theatre major Parker King ’20 researched family life and choreographed multiple dance scenes, including one that takes place in a speakeasy. “I had never done an intense research program like this before,” she says, “and now that it’s over, there is such a sense of accomplishment and pride in the work.”

For AnnMarie Morrison ’20, a double major in theatre and business management, serving as Private Lies’ costume designer meant puzzling through the challenges each actor might face in a film noir setting. It also provided opportunity for personal reflection: “The first-year student in the costume shop I was before would be so amazed by the researcher and costume designer I am now.”

Scientists of the Stage

Students researched a topic or technique, then tested whether it translated to the stage. Charles calls this “embodied research” the theatrical equivalent of being a scientist. What caused someone to commit a crime during the Great Depression, for instance? “This allowed us not only to act the scene, but to really feel it,” says theatre major Faith Artis ’21. “We were able to workshop exactly what topics we wanted to explore.”

Celebrating its 20th year at Rollins, the Student-Faculty Collaborative Scholarship Program has received $1.7 million in funding for 580 projects, nearly 20 percent of which have been published in scholarly journals.
Learn more about how this program is preparing our students to be tomorrow’s leaders.