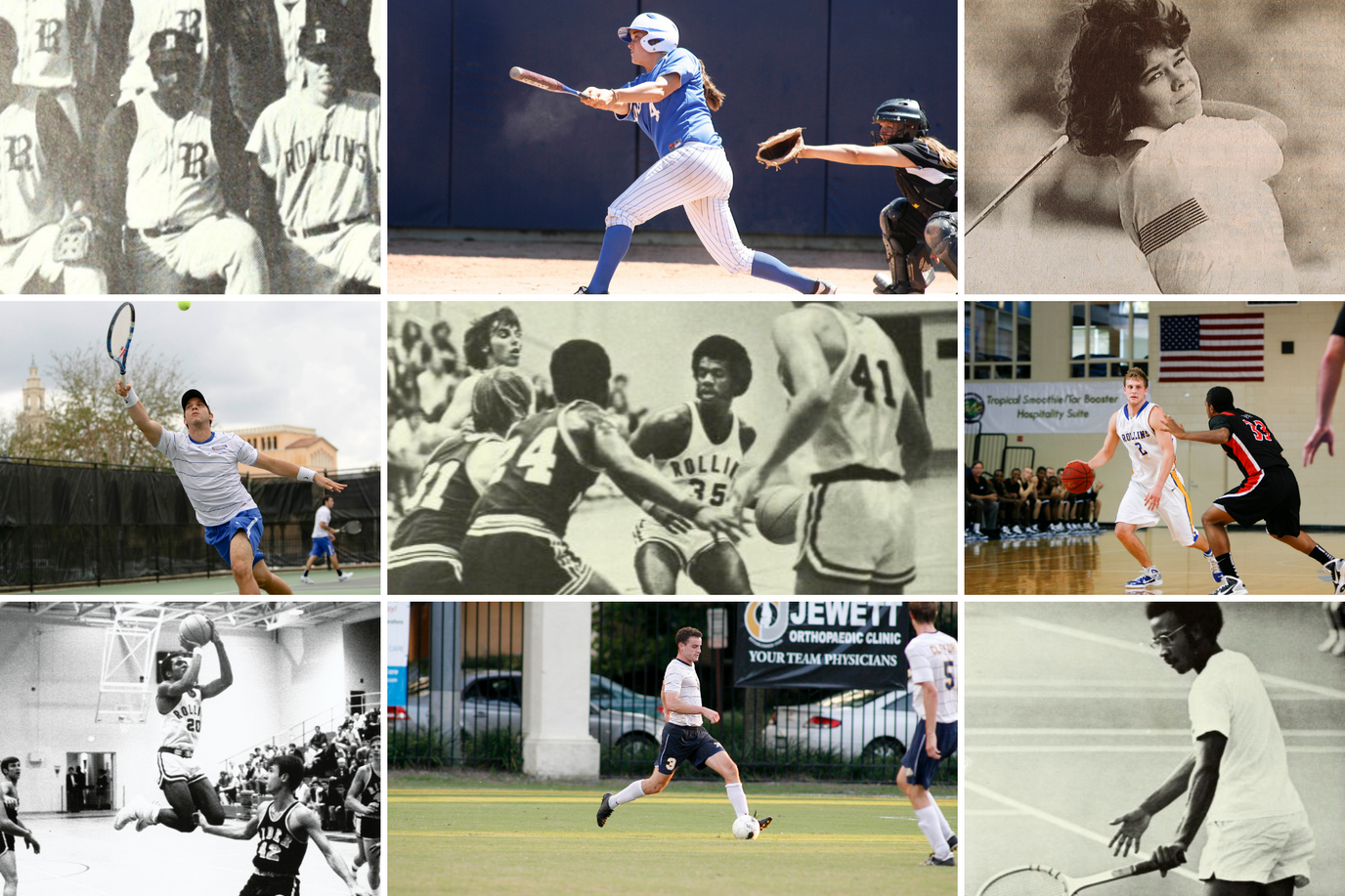 The College inducts 14 student-athletes into the Class of 2022 Rollins Sports Hall of Fame.

Rollins is inducting 14 student-athletes into the Class of 2022 Rollins Sports Hall of Fame, the highest recognition for those who have contributed to the history of Tars athletics. Seven of this year’s honorees—in tennis, baseball, basketball, softball, and volleyball—are among the College’s first generation of Black student-athletes.

Established in 1977 to honor the history of Rollins College Athletics, the Sports Hall of Fame now boasts 234 members who embody the Tar spirit of discipline, teamwork, and sportsmanship that defines the 123-year history of intercollegiate sports at Rollins.

Kicking off Alumni Weekend 2022, the induction ceremony will take place Thursday, March 24, at The Alfond Inn. Here’s a look at this year’s honorees and their many accomplishments as student-athletes at Rollins.

A two-time All-American student-athlete, Thomas Biddinger led Rollins men’s soccer to a runner-up finish at the 2010 NCAA Division II National Championship. Selected to CoSIDA’s Academic All-District three times, he was also named the 2010 Sunshine State Conference (SSC) Defensive Player of the Year and led the Tars to a pair of SSC titles.

When he enrolled at Rollins in 1969, Reggie Brock became the College’s first Black tennis player and would go on to appear in 27 straight NCAA tournaments. In his first season, Brock won his only singles contest while going 4-5 in doubles against some of the stiffest competition in the country. As a senior, he tallied an unblemished doubles record, helping the Tars to a 17-4 overall mark and another season as a National Championship contender.

In 1970, Eddie Campbell became the first Black student-athlete to graduate from Rollins. He joined the baseball team as a junior, making seven appearances, tossing 40.2 innings, and finishing fourth on the team in strikeouts his first season. As a senior, Campbell threw 45.2 innings in nine games, compiling a 5-1 record and a 2.36 ERA, all while leading the Tars to a 21-13 overall record. During his time as a Tar, Campbell was actively involved on campus and pushed for Rollins to become a more inclusive community.

An offensive force for the Tars on the court, Tanya Collins remains one of the most highly decorated volleyball players in Rollins history. She ranked second on the team in kills, helping Rollins to third-place rankings in the SSC standings. In her final two years, Collins was named First Team All-Conference while also earning All-Tournament Team recognition.

Brian Compton was one of the nation’s top-ranked tennis players throughout his time as a Tar. A three-time All-American, Compton and doubles partner Jonathan Gomez ’08 finished the 2007 season by ranking No. 10 nationally before moving up a spot to No. 9 the following year. In singles play, Compton was First Team All-SCC in 2008 and closed the season at No. 10 in the nation, garnering ITA All-America honors.

Rollins’ first Black female student-athlete, Lawanna Gelzer had a legendary two-year stretch on the women’s basketball team. As a sophomore, she averaged 15 points and nine rebounds per game, leading the Tars with a 52.4 shooting percentage and earning First Team All-SSC Honors. As a junior, she pulled out 19 points per game, which ranked her No. 29 in the country.

In fall 2011, Lucas Jovita delivered the most decorated season in the history of men’s tennis with the Wilson/ITA South Region Championship and ITA Division II Singles National Championship. He went on to become the only player in the program’s history to win the ITA “Super Bowl” as the national singles champion of NCAA Division II, Division III, NAIA, and JUCO. Jovita finished the spring season as the SSC Player of the Year and was named a 2012 ITA National Scholar-Athlete.

The first Black athlete to compete in an athletics competition for Rollins, Larry Martinez led the basketball team to a record-breaking 16-9 season. He graduated with 1,528 points and currently sits at No. 14 for both rebounds and points scored as well as No. 6 in free throws. Off the court, Martinez served as president of the Black Student Association and a member of Lambda Chi Alpha. Additionally, he was honored as a Who’s Who Among Students in American Colleges and Universities and received the prestigious Algernon Sydney Sullivan Award.

Three-time All-American, four-time ITA National Scholar-Athlete, and four-time All-SCC honoree, Jeff Morris ranked No. 5 in national doubles and No. 7 in singles during his time as a Tar. In his career with Rollins men’s tennis, he was also named the SSC Player of the Year and landed a spot on the All-SCC First Team.

Chuck Morton was part of the pioneering group of Black student-athletes who integrated Rollins athletics during the 1968-69 school year. The point guard compiled a career 60-43 record throughout his four seasons on the men’s basketball team, helping the Tars to four consecutive winning seasons. He also earned a spot on the Dean’s List for his efforts in the classroom and served as a member of the Annie Russell Theatre production team.

An accomplished setter, Letitia Myrick possessed great court sense and keen leadership skills. In addition to her contributions on the court, she also helped start Rollins’ softball team, serving as team captain from 1982 to 1985 and laying the groundwork for the Tars’ ascension to fast-pitch, SSC, and NCAA competition in 1986.

Christine Roser-LeFevers left Rollins as the most decorated player in the history of Tars softball. She was a three-time All-American, twice named Diamond National Catcher of the Year, and made the All-SSC First Team every season. Roser-LeFevers bookended her career with SSC Freshman of the Year honors in 2008 and the SSC Player of the Year in 2011. She left Rollins as the program leader in hits, doubles, home runs, RBIs, and runs scored, leading the Tars to three straight SSC championships and four trips to the NCAA Division II Tournament.

Women’s golfer Bettina Walker earned the first CoSIDA Academic All-America honor in the College’s history. She was a two-time NCAA Small College Champion, winning in 1988 and 1989, and finished as runner-up in 1987. She received at-large bids to the NCAA Division I national championship each year of her Rollins career.

Nick Wolf led Rollins men's basketball to its most successful four-year run while earning multiple individual accolades, including two SSC championships, two SSC Tournament titles, and a pair of NCAA Division II National Championship appearances. A three-time All-American and SSC Player of the Year, Wolf is the only player in program history with 2,000 points and 1,000 rebounds. He joins uncles Daniel ’89, David ’93, and Jeffrey ’88 Wolf in the Rollins Sports Hall of Fame.