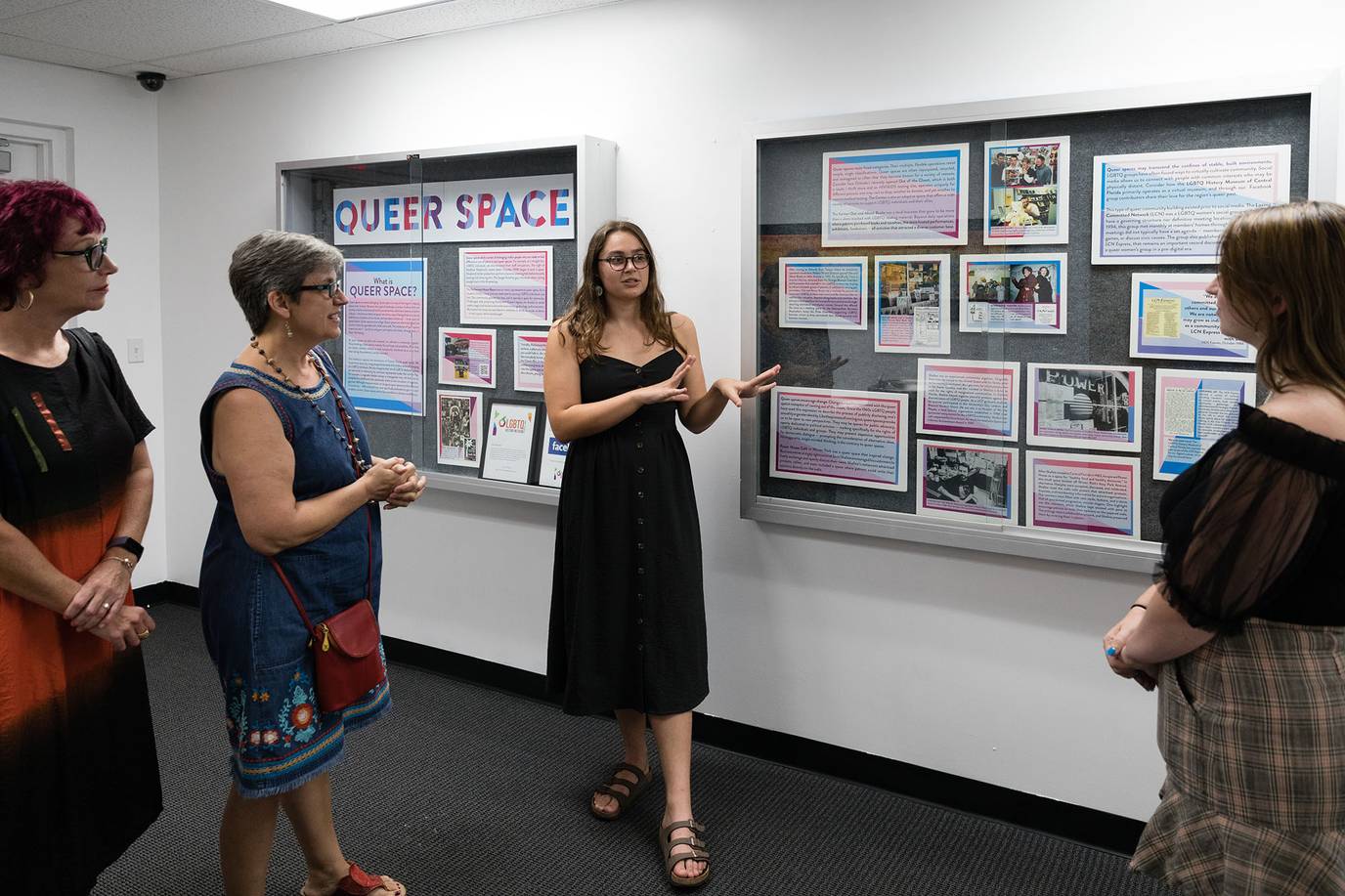 Vibrant, safe spaces for local queer communities are the focus of work in which Rollins students curate history exhibits from start to finish.

A beloved bookstore. A go-to local cafe. A softball team. The varied places where queer communities have flourished in Central Florida is the focus of groundbreaking new research by Rollins students.

In history professor Claire Strom’s History of American Sexuality course, students have been uncovering little-known local history about places of import in the LGBTQ+ communities through a partnership with the LGBTQ History Museum of Central Florida, where Strom sits on the board. For their final projects, the students were given the option of writing a research paper or working on an exhibit.

“It is important to remember our community is fragile, our history is fragile, and so we have to work to preserve that,” says David Matteson ’15 ’18MBA, associate curator of education and outreach at the Orlando Museum of Art and president of the LGBTQ History Museum’s board of directors. “That's a big part of what I hope to instill in the students through this project, realizing that history is not just what is contained in the more established narratives, but about everyday people and what we fight for.”

Under the guidance of Strom and Matteson, history majors Heather Borochaner ’21, Devorah Burgess ’21, Margaret Stewart ’22, and Erika Wesch ’23 have spent the past several months researching and curating one-of-a-kind exhibitions for the LGBTQ History Museum. They’ve enjoyed a rare level of responsibility as undergraduates, sifting through many thousands of original documents. Their exhibitions are on display both on the museum’s website and at The Center Orlando, a local nonprofit dedicated to promoting and empowering the LGBTQ community and its allies through information, education, advocacy, and support.

“The ability to create an exhibit from beginning to end is something most undergraduates don’t get to do,” says Strom. “The students modeled excellent civic responsibility in designing exhibits that tell an important part of Orlando history.”

Coming Out with Pride

Margaret Stewart ’22 sorted through numerous photographs and event programs to create an exhibition that will be installed this fall about the exponential rise of Orlando’s Come Out with Pride organization and annual event. Her research shows how sponsorships from Disney, Macy’s, and other corporations helped mainstream the annual celebrations, which rose from 15,000 participants in 2006 to 200,000 in 2019.

“The LGBTQ community throughout history has often had their own world, their separate space, especially in the early 20th century,” says Stewart, who plans to earn a PhD in history and work in a museum or as a professor. “The Come Out with Pride parade is bringing this space out into the public.”

The theatre and history double major refined her mastery of primary sources to write placards offering historical context. Stewart explains how grappling with material showing how the 2016 Pulse nightclub shooting affected Come Out with Pride underscored the gravity of the project.

“The LGBTQ community deserves to be on display, to have this huge celebration of identity and love,” she says. “Come out with Pride shows how they opened that to the world, and they’re not afraid. It’s important to display to the community because it honors a huge facet of the Orlando community and a huge cornerstone for people here.” 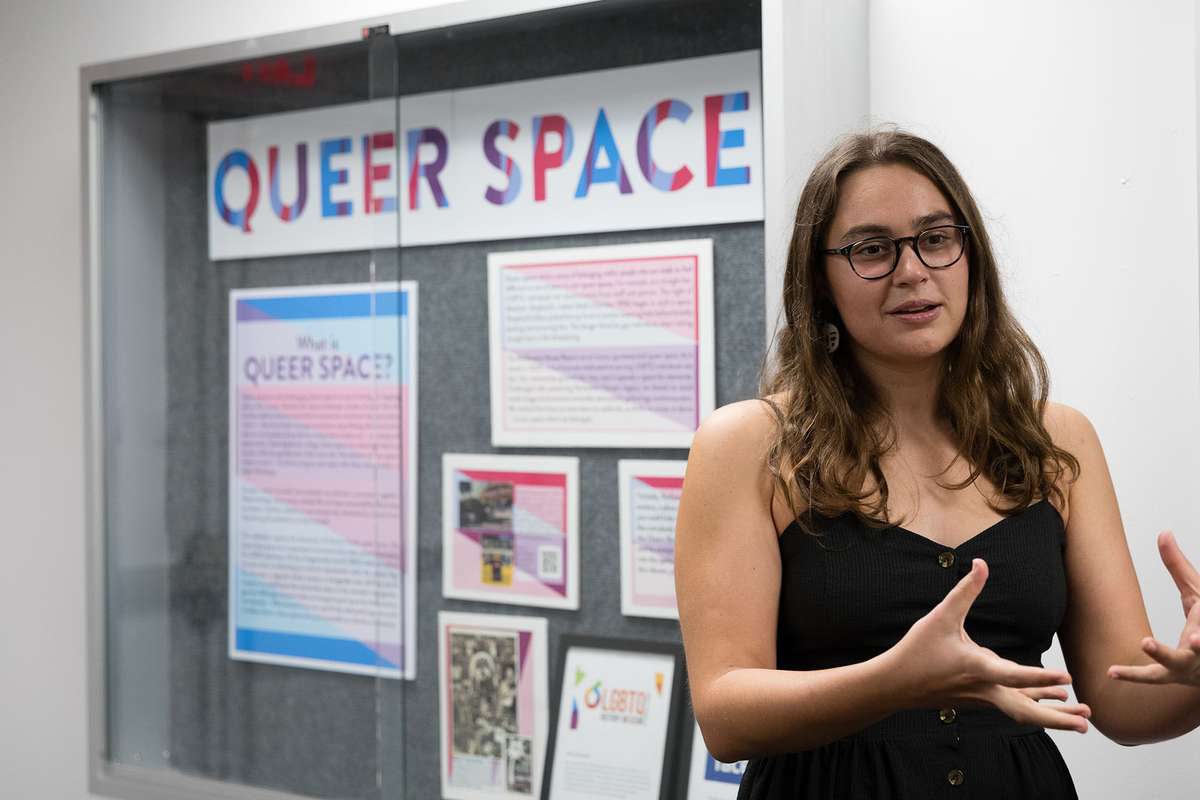 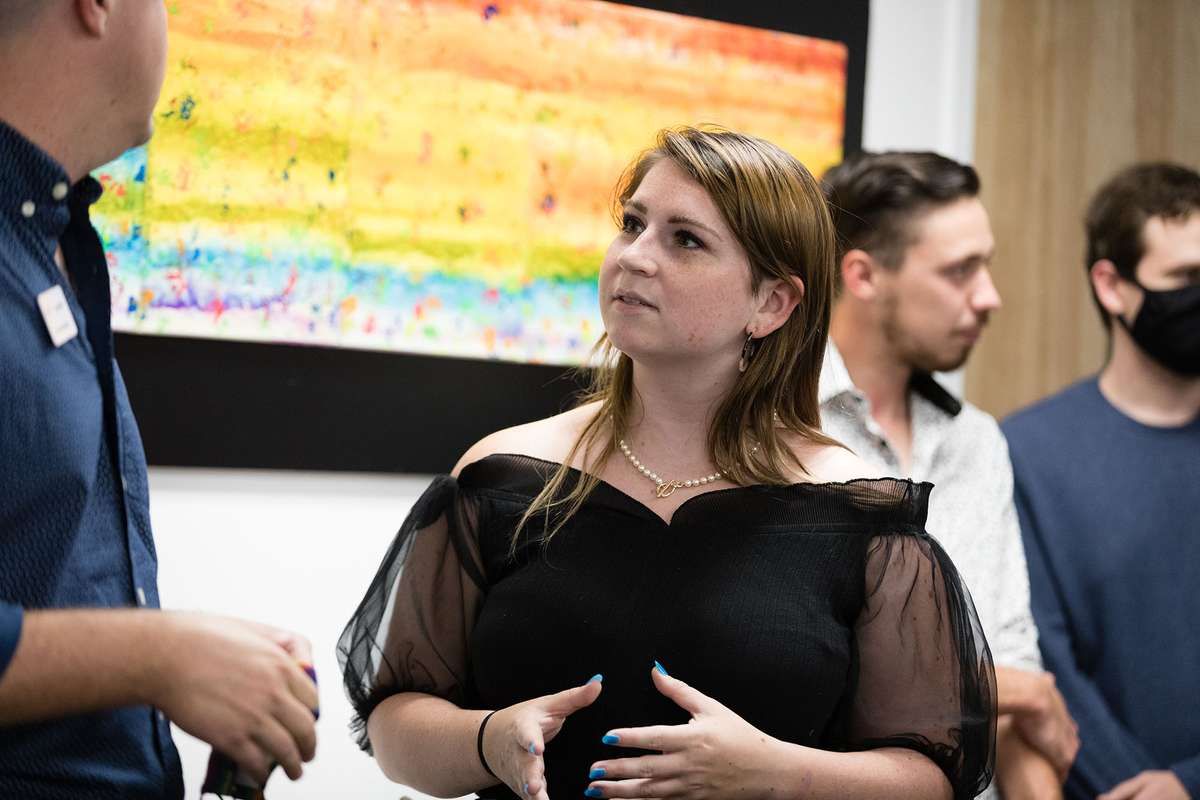 Devorah Burgess ’21 and Erika Wesch ’23 researched two local storefront pillars that provided decades-long support for queer communities near Rollins’ campus. The fruits of their research came together in the Queer Spaces exhibit they debuted at The Center Orlando earlier this month, demonstrating the breadth of LGBTQ gathering spaces—beyond bars and nightclubs—that cultivated community and empowerment.

Wesch dove into the history of Out and About Books, a Winter Park bookstore that graced North Mills Avenue from 1992 to 2001. She had full creative control in choosing from more than 1,000 documents, including a video interview with the store owner, Bruce Ground.

“Having my name attached to an entire curated exhibit in a museum is such a cool thing to put on my resume” says Wesch. “It’s also such a Rollins thing—to do a museum exhibit for your final class and have it actually published. You have all these opportunities since you’re in such a close-knit environment.”

Burgess agrees, hoping to pursue a museum career and pointing to skills she gained through this hands-on experience in storytelling, writing, and research for her exhibit on the Power House Cafe off Park Avenue. Founded in 1970 by Saviz Shafaie, an openly gay immigrant from Iran, the Mediterranean eatery has long embraced LGBTQ customers and activists even in the face of resistance.

“At least once a week during my years at Rollins I walked by Power House Cafe, oblivious to its history and significance to the community,” says Burgess, who is excited to bring the little-known story to light.

As an intern with the LGBTQ History Museum of Central Florida, Heather Borochaner ’21 is scouring local photographer and community ally Stephen Roberts’ collection of more than 60,000 photographs documenting 20-plus years of recreational sports teams, another venue for queer people to gather, express themselves, and build community.

She’s organizing and creating archival metadata for photos of local teams, including the Central Florida Softball League and the Orange Blossom Tennis Association, which will eventually help build an online museum exhibit. Borochaner’s experience as editor-in-chief of The Sandspur—managing high volumes of data, curating content, and organizing stories—was the perfect preparation for her internship.

“I am very interested in archival work and serving a museum, so this internship was right up my alley,” she says. “During my time at Rollins, I had also been a volunteer at the Winter Park History Museum, so this is something I’ve been playing with for a while. I’m hoping this experience will help me get my foot in the door and continue doing similar work in a professional environment.”