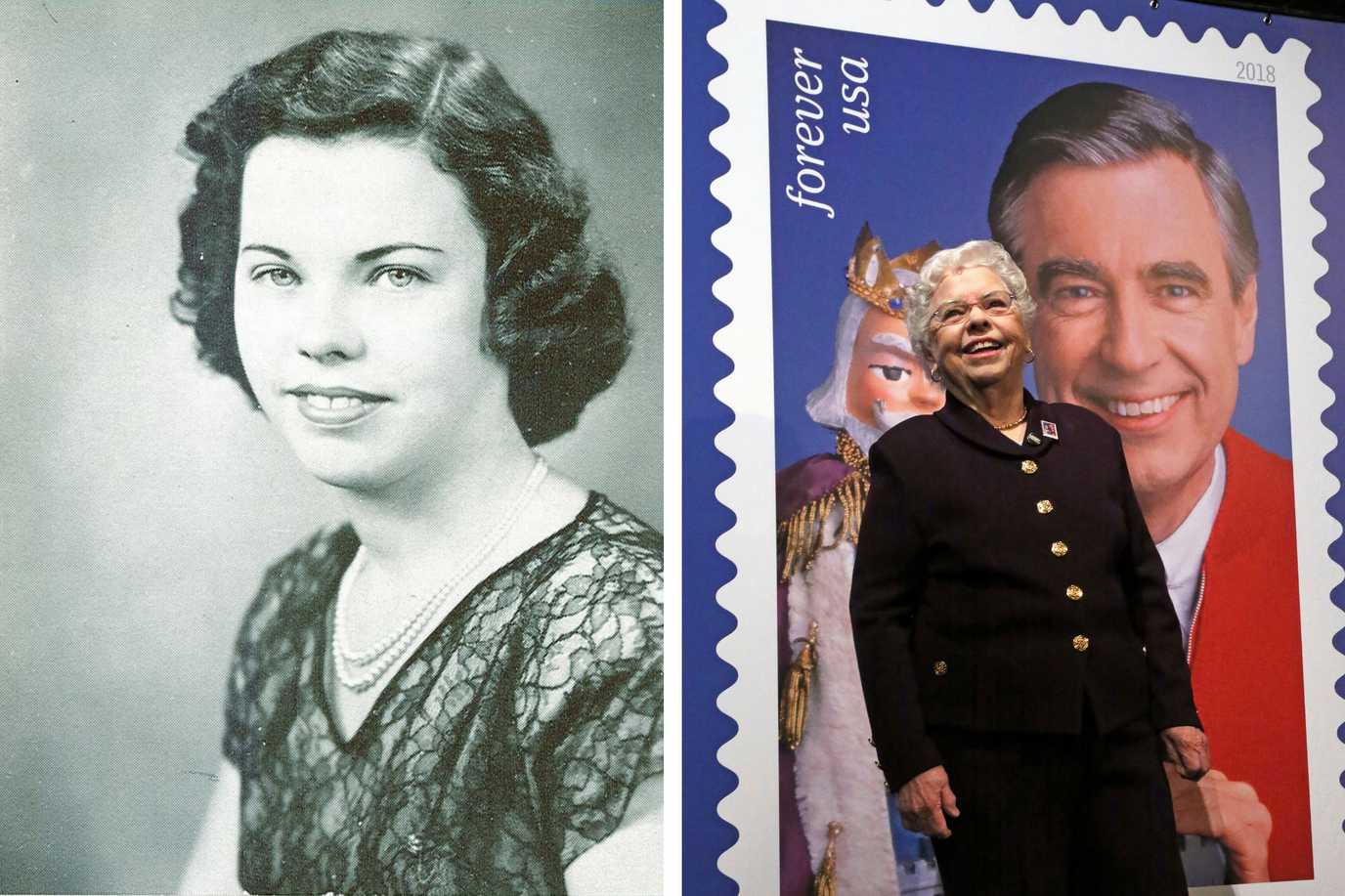 Rollins says goodbye to Joanne Rogers ’50 ’05H, the uncommonly kind, prolific pianist who played an instrumental role in the life and legacy of her husband and everyone’s favorite neighbor, Fred Rogers ’51 ’74H.

An only child, Sara Joanne Byrd was born March 9, 1928, 11 days before her future husband and Rollins’ beloved alumnus, Fred Rogers ’51 ’74H, who created the iconic children’s television show, Mister Rogers’ Neighborhood. Joanne was raised in Jacksonville, Florida, by her parents, Ebra and Wyatt Byrd, and at age 5, took up piano lessons after a neighbor recommended a caring instructor.

“[My piano teacher] thought I was musical because I didn’t bang on the piano—I picked out tunes,” Joanne said at a TEDx event in 2018. “I had to learn the alphabet at that time, from A to G. That’s all I needed.”

Joanne’s aptitude on the keyboard eventually led to a music scholarship to attend Rollins, where she helped welcome Fred, a transfer student from Dartmouth, to campus in the late 1940s. The music majors were classmates and members of the choir at Knowles Memorial Chapel.

“If I were to imagine the ideal Rollins graduate, it would be Joanne Rogers: compassionate, courageous, and committed to the greater good,” says Lorrie Kyle ’70, executive director of Rollins’ Office of the President and longtime friend of Joanne.

Joanne was comfortable outside the spotlight of her husband, yet she could light up a room as a renowned musician in her own right, performing for 36 years in a piano duo across the United States with former Rollins classmate and lifelong friend Jeannine Morrison ’51.

“I don’t know anyone who Joanne didn’t relate to,” says Morrison, who recorded two albums and performed more than 300 concerts alongside Joanne. “She was perfect company, and she was the same to everybody she ever met.”

After graduation, Fred and Joanne kept in touch between New York City, where he was launching a television career, and Florida, where she completed a master’s of music at Florida State University and held a fellowship with the Hungarian composer and pianist Ernst von Dohnanyi. The couple married in 1952 in New York City, entering a union that thrived for half a century.

“Fred would not have been Fred without Joanne—more than people realize,” says Rita Bornstein ’04H ’04HAL, president emerita of Rollins. “Why do we all love this couple so much, even those who didn’t know them? There’s something about them that radiates, that shone off of them.”

Friends recall that Joanne, like her partner, also had a natural ability to relate to children. She inspired the beloved puppet Queen Sara Saturday on Mister Rogers’ Neighborhood, which debuted in 1968 and ran for more than 30 years. In the 1970s, Joanne taught music at Chatham College Preparatory School and Carlow College in Pittsburgh.

Arthritis caused Joanne to stop performing concerts in 2008, but she stayed active in numerous public-service roles, including on Rollins’ board of trustees, where she enjoyed being part of the decisions that guided the College.

“Joanne had a sense of humor and just a joy in her life that was contagious,” says Bill Frederick ’99H, former mayor of Orlando who served with her on the Rollins board. “She could tell some stories that would surprise you as the wife of a Presbyterian minister and Mister Rogers. She was just pretty genuine.”

Just this past October, music major Lexi Shroll ’24 had the opportunity to meet Joanne on a video call in her Successful Pathways Through Music course, taught by music professor Gloria Cook, another close friend of Fred and Joanne.

“She told us stories about her experiences at Rollins,” says Shroll, who notes Joanne’s unique ability to make even her virtual interactions with the students personal. “She told us about how [she] and Mr. Rogers won the Halloween Dance costume contest dressed as Raggedy Ann and Raggedy Andy.”

Joanne also served as chairman emerita of the board of directors of Fred Rogers Productions, as honorary chair of the advisory council for the Fred M. Rogers Center for Early Learning & Children's Media, and on the advisory board for the Pittsburgh Youth Symphony Orchestra.

She stewarded her husband’s legacy during the recent resurgence of appreciation for his groundbreaking television show and appeared in the 2018 documentary Won’t You Be My Neighbor? She was also a fixture on set of the 2019 feature film, A Beautiful Day in the Neighborhood, starring Tom Hanks and Maryann Plunkett.

“I just want things to be better and kinder,” Rogers told a Pittsburgh crowd in 2018. “‘Kind’ is the word we need to think about these days.”