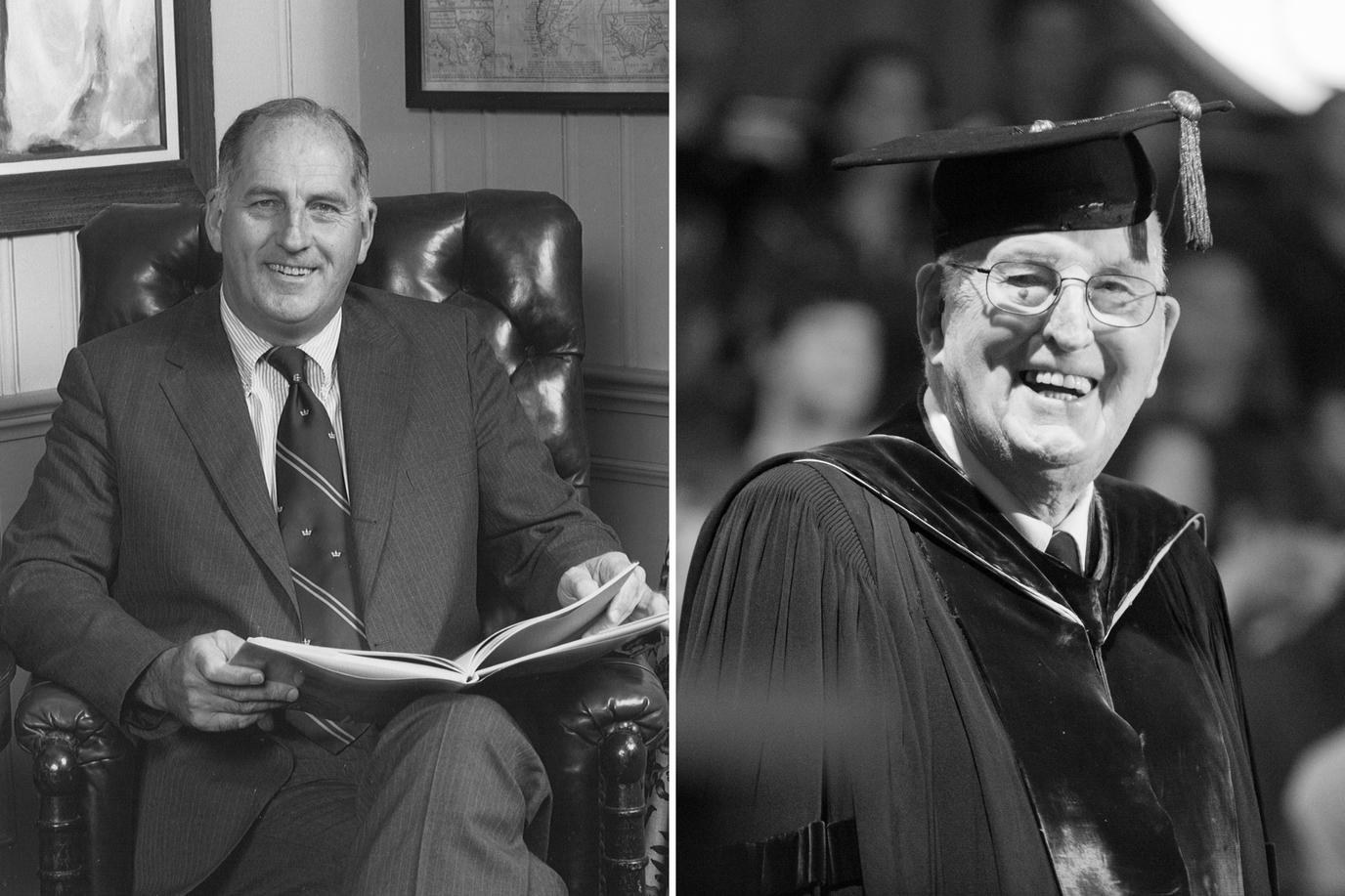 The life of Rollins’ 12th president, Thaddeus Seymour ’82HAL ’90H, is a testament to that which he held most dear: kindness. Now the College declares a day in his honor—a day for us all to come together and sprinkle a little bit of the magic that was so distinctively Thad.

How’s this for countercultural? Two texts and three emails are sent to five complete strangers. The messages are shots in the dark, destined perhaps for the digital trash can. But each message is answered within 20 minutes. They’re all really nice too.

“Would an hour be long enough for you?”

“For Thad, anything you want.”

The subject is Thaddeus Seymour ’82HAL ’90H, who served as Rollins’ 12th president from 1978 to 1990, and his wife of 71 years, Polly. It’s immediately clear that Seymour must have been more than a college president because the responses are coming from colleagues and some former students who weren’t even at Rollins during his term.

“I’m going through emails I saved from Thad,” says Micki Meyer, assistant vice president of student affairs, who didn’t arrive to campus until 15 years after he retired. “They’re treasures.”

On October 26, 2020, one year after Seymour’s death, Rollins announced that February 17 will be observed as Thaddeus and Polly Seymour Acts of Kindness Day. It’s so-named because the two of them would reach out or show up when it was least expected. Among Seymour’s most tangible legacies are the silver dollars he’d give to students for random acts of kindness. “It doesn’t count if you see me coming,” he said. “You can’t ‘fake’ it.”

True kindness comes with nothing expected in return. It’s as genuine as the man and wife who these five people are so eager to talk about. A graduate from the class of 1990 sends a screenshot of a Facebook exchange from just prior to Seymour’s passing. “Call me,” he texts. We all need to hear this.

During my senior year of high school in New Jersey, I saw a picture of this Rollins president riding in a convertible and waving. I thought, ‘He looks like a nice guy.’ It influenced my decision to attend Rollins. Then, not long after I got to Winter Park, I saw him riding his bike down Holt Avenue to the administration office. Someone said, ‘Oh, that’s Thad.’ Like it was no big deal to see the president of Rollins riding his bike to work.

One time I was working with a group to clean up Mead Gardens. I look up and there’s Thad with Polly. They didn’t announce themselves. They just started digging and getting dirty like everyone else. The man had no ego, and he was always available.

I heard about the silver dollars at Rollins but was never fortunate enough to have Thad catch me in the act. Then, on September 21, 2019, I was walking around Bernardsville, New Jersey, and instinctively picked up some trash. All those years later, I thought of Thad, so I sent a picture on Facebook Messenger to say how he’d changed my behavior. A few weeks later, two silver dollars arrived. I’ve decided to keep them in my car so I can give them to people doing something good, spontaneously, like Thad would do.

Thad is as close to an angel as I’ve ever met. He made sure in his final days that I sent those coins to Woody. He’d left them in my care two years earlier. One afternoon he invited me to come over to his and Polly’s home. We sat on the porch and he said, ‘I want to give you something very special,’ as handed me a velvet bag with 25 silver dollars. He’d given away hundreds over the years, and this is what he had left. He wanted me to continue the tradition of passing them out. I gave one to his granddaughter, Isabell, because he was so proud of how she stood up for her beliefs, one to a staff member who rescued a baby squirrel, and one is in the Rollins Archives.

I always wondered why he took such an interest in someone like me. He rode his bike over to meet me when I started working at Rollins in 2005—15 years after he retired. That was the first of many walks we took. One time I picked up an empty Gatorade bottle. He gave me a silver dollar, but he also wanted me to know why he gave them out. It’s about integrity and doing what’s right for the sake of others. He wanted me to pass on that story with the dollars.

By the way, I can’t describe what it means to see his name on Seymour Hall in the new Lakeside Neighborhood. The building is in the exact location where I picked up that bottle.

Thad would do impromptu magic tricks. A few years after his presidency, he was behind me and my daughter, Kristen, in the checkout line at Publix. She was 7 years old and looked up at Thad with these big brown eyes. He smiled at her, reached behind her ear, and pulled out a quarter—I guess he didn’t have a dollar. Kristen graduated from Crummer with her MBA 27 years later. To this day she associates Rollins with Thad because even with his large stature he was warm and made her feel at ease.

That’s something about Thad we all carry with us—the way he was always thinking of others. When he was president, he lived in a very modest home off Aloma Avenue. It didn’t look distinguished, and frankly, it wasn’t well suited for a college president to entertain. So, before his successor was named, he made sure the College sold the house to allow the incoming president to have a more appropriate place to live and host guests. Thad wanted the next president to be set up for success. It’s just how he was, always putting the good of others before himself.

The Art of a Relationship

When I came to Rollins as a shy freshman, Thad made it clear that he wanted everyone to call him Thad. We’d see him in his khakis and sneakers, with what I’d describe as ‘a happy stride.’ He wore his height with glory—not imposing, but confident. Somehow he helped me feel the same way about being tall.

In my sophomore year, Rollins was finishing Olin Library as a crowning achievement for the school’s centennial anniversary. I mentioned to Thad that it would be nice to showcase art from students and teachers in the library, to make it less rigid and more inviting. Thad said, ‘OK, you’re in charge of organizing an exhibit.’ It wasn’t how you might expect a conversation between a teenager and a college president to go. He even gave me a budget. But I’m most thankful for the confidence he instilled for my first experience as a curator.

For the next 30-some years, my career has taken me to places like New York, Washington, D.C., Minneapolis, Atlanta, and now Arizona. Along the way, I’d still receive cards from Thad and Polly, always handwritten and personal. I started to do the same thing as a museum director, sometimes writing 25 letters a week because I know how special it makes people feel. I learned that from Thad and Polly.

Two years after I graduated, I heard about the new Rollins president riding a bike and wearing tennis shoes to school, a real departure from the corporate approach. I needed to see this guy for myself. The first time we met, Thad only wanted to talk about me. He became my mentor, father figure, and best friend. With him, I could talk about anything.

When I helped start the Habitat for Humanity chapter in Winter Park, I wanted Thad alongside me. He said, ‘Absolutely,’ but he didn’t want to be a figurehead. He’d lug materials, paint, sweep, whatever needed to be done. I’d overhear him introduce himself as ‘Thad’ and then I’d tell the person, ‘That’s Thad Seymour.’ And they’d look at him sweating on his hands and knees and say, ‘Wait … the Rollins president?’

The thing that really moved Thad was seeing the kindness of the volunteers—hundreds of them. Most were college and high school students, and he saw a lifetime of influence ahead of them.

Thad knew that I was petrified to talk in front of groups, so before ceremonies he’d say, ‘Just give the hands-in-pocket speech, Hal.’ It helped me relax. Before he passed away, he asked me to speak at his eulogy. There were going to be two college presidents and a poet laureate speaking. Why me? Thad looked at me, smiled, and said, ‘Hands in pocket, Hal.’

So at the service I told stories of working and watching football together, and what a remarkable person Thad was. As I stood there trying to keep myself together, I looked out at a full Knowles Chapel and felt a sense of comfort. I thought, These people already know. I didn’t need my hands in my pockets because anyone blessed to spend a few minutes with Thad has a piece of his kind spirit with them. And now we have the privilege to share it.

How did Thad impact you? Fill out this form to share your favorite memory of his kindness and how he made a difference in your life. We’ll collect your stories and build a lasting tribute to Thad for the entire Rollins community to enjoy.