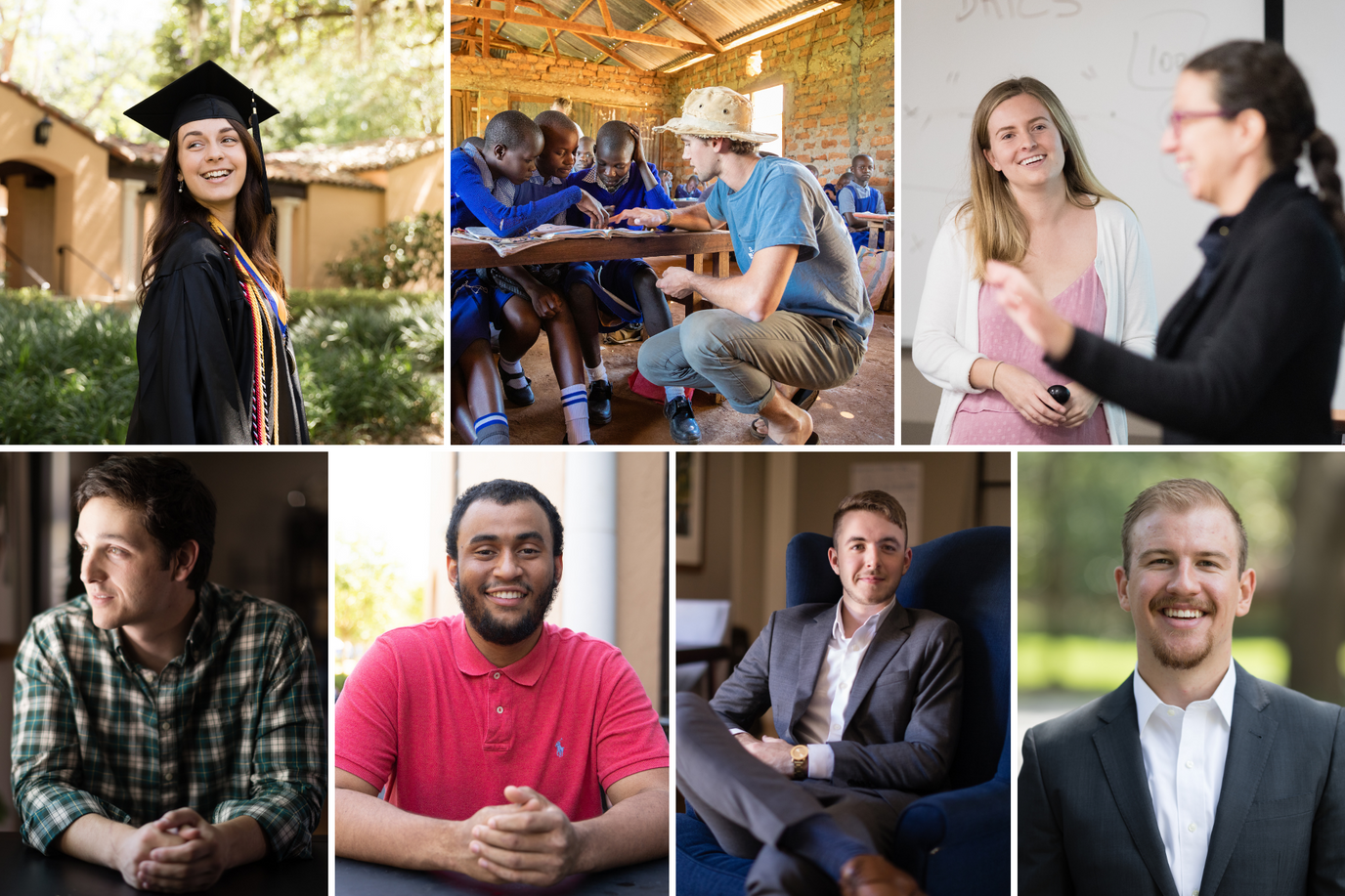 Archuleta will study international security at the University of Bristol. Colangelo and Roderick—the first U.S. military veteran from Rollins to receive the distinguished honor—will both teach English in Germany. Leeper, Khazzam, and Knight will teach English in Spain, Brazil, and Jordan, respectively.

Colangelo, Khazzam, Knight, Leeper, and Roderick will be the 44th, 45th, 46th, 47th, and 48th Tars to participate in the Fulbright Program since 2006. Rollins has been named a top producer of U.S. Fulbright scholars six times.

We recently caught up with the global ambassadors as they prepare to take their next step in their meaningful lives and productive careers.

How Rollins prepared him: “People are the most valuable thing in this world, and any accomplishment I’ve come across is because I was able to tap into the beauty, intelligence, and humanity of those around me. People like Dr. Jay [Jayashree Shivamoggi] and the people in her office, international students, my professors, the staff at the counseling center, and many more. At Rollins and from these people I learned that you’ve got to be obsessed. It takes giving up Friday nights and failing over and over and still being as amped up as before. It means asking for help a lot and asking questions and learning from everyone around you. And it means never being satisfied with the status quo.”

Post-Fulbright plans: “I’m planning to enroll in the Navy’s Officer Candidate School when I get back, but for me it’s more about creating and evaluating a thousand options and deciding which one maximizes my passions and challenges me most.”

Next step: Applying for international-affairs-oriented graduate programs, including those at Yale, Georgetown, and Columbia, and applying for the Pickering and Rangel fellowships while doing translation-based volunteering for immigration services

How Rollins prepared her: “The importance Rollins places on studying abroad and developing a global mindset are what drove me to do just that for half of my junior year and the summer before my senior year in China, where I was really able to immerse in the culture and the language. I’ve also interned and then worked for a congressional campaign in 2016, mentored elementary school students with Google’s igniteCS program, and served as an RCC peer mentor. The friends, mentors, and colleagues I have made at Rollins are truly inspiring and continually motivate me to do better and be better.”

Post-grad-school plans: “Ideally I would like to work for the State Department as a foreign service officer.”

How Rollins prepared him: “My involvement in the German department, especially in the German Club as a student advisor and president, has given me so much exposure to German culture and language, and I was able to study abroad in Munich during the spring of my junior year. I also had the opportunity to intern at the largest Italian language school in Milan through Rollins Professional Fellows, where I learned so much about international business and marketing practices. Also, my time spent as an RA for two years and as a peer mentor has given me invaluable leadership experience and taught me how to work effectively with groups of students.”

Post-Fulbright plans: “I definitely want to work with internationally focused firms that seek to provide language instruction or cultural experiences on a global scale, especially to young people, and act as a changemaker in places that need it most.”

How Rollins prepared him: “On the first field study I did with [political science professor] Dan Chong to the Dominican Republic, I discovered how much I loved spending time in developing countries and meeting the people like my homestay family who I learned so much from. I also went on Dr. Chong’s field study to Tanzania focused on community development, which inspired my passion for this field. I really didn’t know Fulbright was something I wanted to be a part of until I took advantage of these travel and volunteer opportunities through Rollins.”

How Rollins prepared her: “At Rollins I’ve had the privilege to study abroad several times in strikingly different regions of the world. As an English instructor in India, Zanzibar, Tanzania, and Jordan, I’ve gained the necessary skills to serve as a cultural ambassador in the classroom. And my research I did this past summer with [psychology professor] Sharon Carnahan on early childhood education methods in southwestern Uganda really solidified my passion for accessible education. The Fulbright is a natural progression on the path that Rollins has helped me shape.”

Post-Fulbright plans: “I hope to return to the U.S. and pursue a career in the nonprofit sector, hopefully with an organization that focuses on U.S.-Arab relations.”

How Rollins prepared him: “One of the greatest benefits of Rollins was that there were so many international students, some of whom have become some of my closest friends. Meeting these students helped me gain a lot of perspective on different cultures and lifestyles, which I was able to build on when I had the opportunity to study abroad in Oviedo, Spain. This experience was life-changing, and I fell in love with the country and the culture and really learned the importance and advantage of learning a second language. I’m also so grateful for [Spanish professor] Alberto Prieto-Calixto who has given me so much support and guidance in my major and in my life.”

How Rollins prepared him: “The international makeup of the Rollins community has been such a benefit. During my time here, I worked with students and faculty from all over the world and have been given many opportunities to foster my teaching abilities, both as a German and Arabic tutor and as an international peer advisor.”

Post-Fulbright plans: “I’ll likely pursue my master’s degree in foreign policy but might try getting a job in the field first.”