10 Tars Among Winter Park’s Most Influential 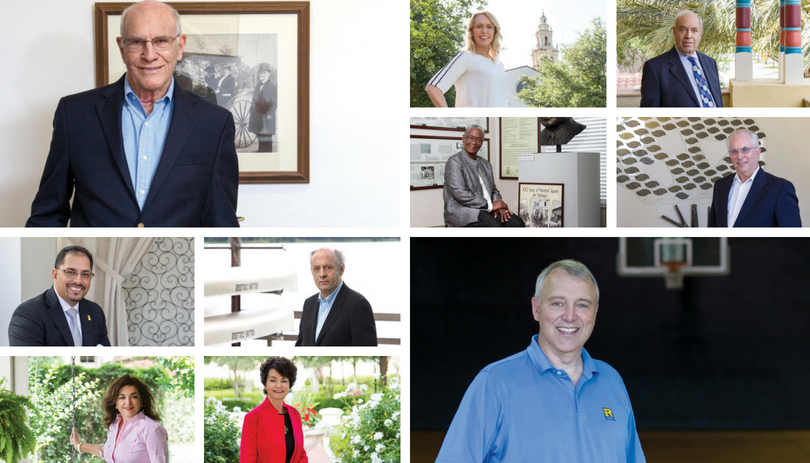 Nearly half of Winter Park Magazine’s 2018 list of the city’s most influential people have a connection to the College.

Every year, Winter Park Magazine publishes a list of the city’s most influential residents in its summer issue. Not surprisingly, Tars tend to appear prominently. Rita Bornstein ’04H ’04HAL, Polly Seymour, Micki Meyer, and Ena Heller made the 2017 edition of the list. Four more Tars, including President Grant Cornwell and Peg Cornwell, made the cut in 2016, and the inaugural list in 2015 included Allan E. Keen ’70 ’71MBA ’10H, Thaddeus Seymour, and Harold Ward ’86H.

This year, more than half of the honorees boast a past or present connection to the College. To celebrate, we put together a sneak peek of this year’s collection of influential Tars. The full list appears in the magazine’s summer 2018 issue, which is available now.

Why he’s on the list: The magazine’s editors call Collins, a two-term U.S. poet laureate and New York Times bestseller, “the most important writer of any genre ever to have a 32789 zip code.”

Why he’s on the list: The magazine’s editors call Ginsburg, CEO of AHG Group and a Rollins trustee, one of the region’s most respected and generous philanthropists.

Why he’s on the list: The magazine’s editors call Baldwin, who is the CEO of Baldwin Brothers Cremation, “one of Winter Park’s most respected businesspeople, in part because of his personal warmth and in part because he has done so much to improve the lives of people who haven’t yet needed his professional services—particularly children and senior citizens.”

Why she’s on the list: Because she “makes certain that the society—arguably the region’s most significant cultural organization—is well funded though a complex web of public, quasi-public, and philanthropic sources.”

Why he’s on the list: Because what’s most important to Klusman, the 10th winningest coach in NCAA Division II history, is “that his players experience Rollins as students first and athletes second.”

Why he’s on the list: Because “if not for Jack Lane, the history of Rollins College—and by extension, a considerable swath of Winter Park history—would today be obscure or unknown.”

Why she’s on the list: The magazine’s editors call Livingston, who is chief historian of the Hannibal Square Heritage Center, “the institutional memory of Winter Park’s west side.”

Why he’s on the list: Because “his management savvy” and “his accessibility and pay-it-forward personal philosophy” have helped the AAA Four Diamond hotel rank among the best in the world.

Why she’s on the list: Because McKinnon has helped spearhead some of the area’s most significant developments through her consulting firm, McKinnon Associates.

Why she’s on the list: Because Wood, who is president and owner of Cynthia Wood Philanthropy Partner, “has particular expertise in teaching nonprofits how to engage the inherent generosity of female donors.”