10 Questions with “The Rev” 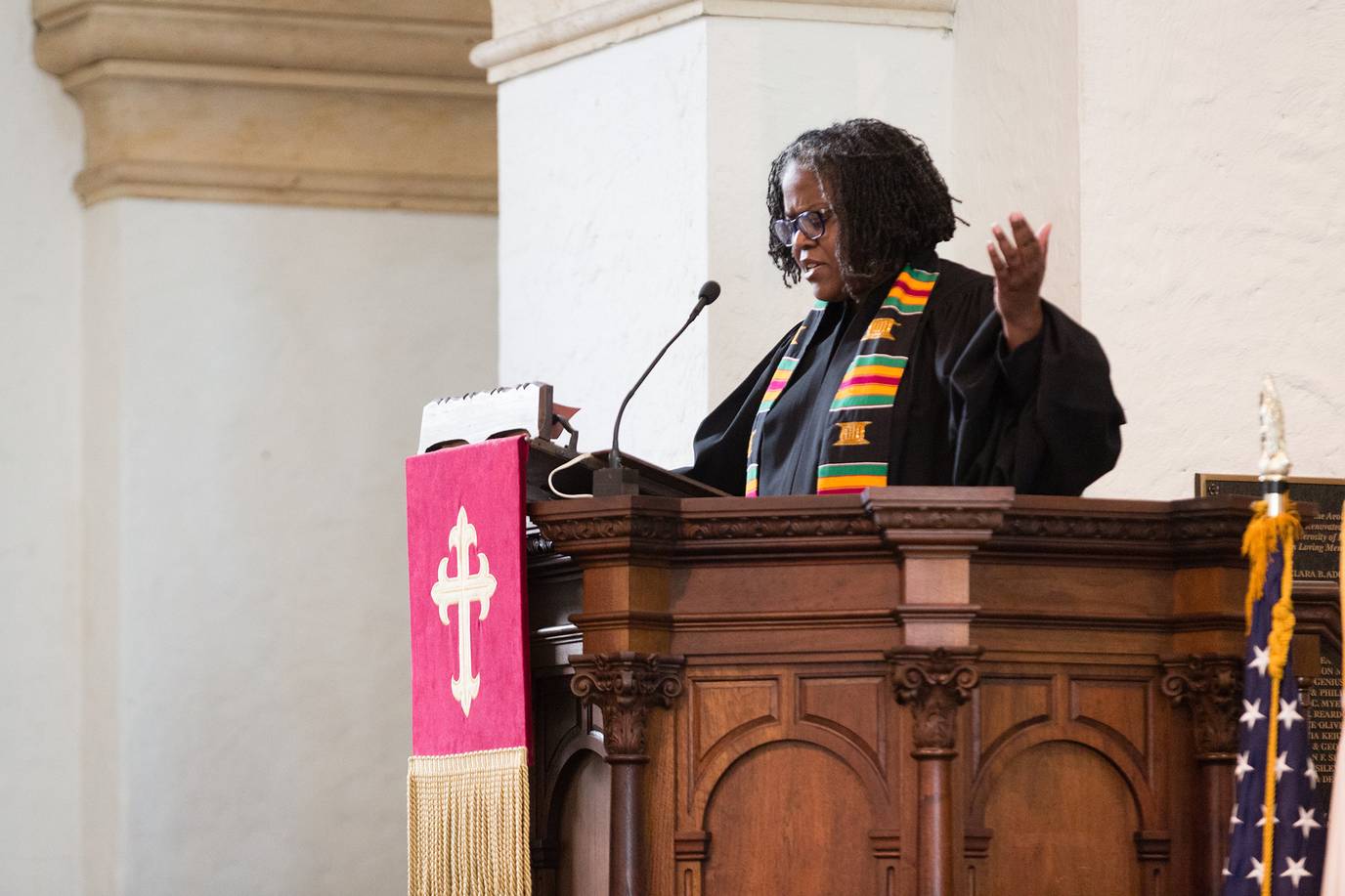 Don’t be surprised if the Rev. Katrina Jenkins, Rollins’ new dean of religious life, hands you some crayons in the cafeteria or talks smack about your football team.

Toting an old-school Star Wars writing journal, Katrina Jenkins plunks down on a cushy chapel armchair and admits she’s “a little bit of a geek,” a sucker for sci-fi who occasionally wields a lightsaber from the pulpit.

More Renaissance reverend than pretentious preacher, Rollins’ new dean of religious life is one of those rare people who can strike up a deep conversation with almost anyone on any given subject.

A classically trained flute and piccolo player, she adores Earth, Wind & Fire but also has an iPad stocked with jazz, rock, rap (the clean stuff, mind you) and Bieber-style pop. On stage, she’s done everything from improv to Godspell and The Vagina Monologues.

Then there are sports. Jenkins—who attended Syracuse with former NFL quarterback Donovan McNabb—could go on for hours about why the Dallas Cowboys are God’s gift to football. But that wouldn’t leave enough time for her beloved Mets, Lakers, and Blackhawks.

Affectionately known as “The Rev,” Jenkins’ first topic of conversation typically has nothing to do with religion. Before getting into the heavy stuff, she wants to connect with people on a personal level.

On a recent Monday, as students started finding their way back to class, we sat down with Jenkins to discuss what she has planned for religious life on campus.

When did you know you wanted to go into the ministry? Growing up, my parents encouraged my brother and me to go to church, and I was just one of those wacky kids who enjoyed it. Early on I started volunteering in church, and it was just one of those things that stuck. Being involved in youth fellowship helped prepare me for where I’m at in life now. But I also went and did all the crazy college stuff too, so I’ve been there, done that. I get it.

Where can people expect to see you on campus? I do something called “Connect with The Rev” where I go into the cafeteria and just hang out. Sometimes I’ll bring crayons for students to draw—that’s a great stress reliever. I do a lot of loitering with intent. I’ll go watch anything—from swimming to track to tennis. Anywhere the students are, that’s where I want to be.

Why come to Rollins? A couple things are happening on college campuses right now: Either colleges are cutting back their religious programs or you have campuses like Rollins that want to talk about faith and have some, good honest conversations. I found it very interesting that they were willing to put some traction behind the chaplaincy. Rollins was honest in saying, “We’re not where we want to be, but we’re interested in getting there.”

What would you like to change? A lot of folks only call on chaplaincies when there’s a crisis. I’d like to be more proactive. If we can build a strong working relationship with the community and be a viable player on campus, there will be more programs and speakers and the chapel will be more top of mind. I want us to partner with students, faculty, and staff to be a more accessible resource.

This is your second time being “the first” on campus, right? Yes. At my last school, I was the first Baptist and first African-American woman to hold the position of chaplain. And the same is true here at Rollins, which has historic ties to the Congregational Church.

What’s your approach to interfaith cooperation? I’m here to build bridges. I’ll be meeting with all the groups on campus that fall under religious or spiritual. One of the things I’m charged to do as dean is build a stronger interfaith organization, and I want to develop a mission defining the purpose of spiritual life on campus. It doesn’t matter if you’re of faith or not, I journey with people. That’s the fun part of this job for me. I’m always humbled when people allow me to do that with them. I have found in my work in the interfaith realm that I have been able to maintain my Christian persona while learning to gain a better appreciation of other faiths, too.

What events are on the docket for this fall? We partnered with the music department and student affairs to do a Sept. 11 and Pulse remembrance called We Choose to Love. The chapel won’t be as heavy on the programming arm this semester, but that will change in the spring. In the past, I’ve done things like hunger-awareness banquets, Random Acts of Kindness Month, theme-based chapel services, labyrinth spiritual exercises, and even dinners where the only things people can talk about are money, politics, and faith. Now, that’s a fun one!

Speaking of politics and faith, what’s a subject you see that’s particularly relevant today? At my last school, we had a really honest conversation about LGBT and Christianity. It was a big elephant in the room, so we talked about it for two and a half hours. Sure, things got heated at times, but it was also respectful and we set some guidelines. As a community, we want to share stories and togetherness. That’s where we can meet.

You talk a lot about how love can bring us together. How does that play out in real life? Having a foundation of love doesn’t mean we won’t have issues or arguments, but it means we choose to be in relationship with one another. We choose the opposite of hate. So if you’re in class, it’s about being able to open yourself up for learning in a civil way. You might disagree with someone on a certain issue, but you’re not going to walk away and call them a hate monger on social media. We need to look at people’s intent. Step back and assess before you react.

When can people stop in and say hi? Anytime. I’ve got a Keurig stuffed with coffee and tea, and my door is open for everyone on this campus. I hear a lot of people tell me I’ve been to the chapel but never the office. I want to make this a more user-friendly place.

Raised in Stratford, Connecticut, Jenkins spent the first part of her career in pharmaceutical sales and the human resources side of managed-care HMOs. Ordained in the American Baptist Churches, USA, she earned her master’s of divinity from Andover Newton Theological School in Massachusetts (graduating with former interim chapel dean Shawn Garvey) and most recently served as chaplain at Illinois College. Before that, she was the Protestant chaplain and multicultural center liaison at Bentley University from 2000 to 2011.