Tars on the Hill 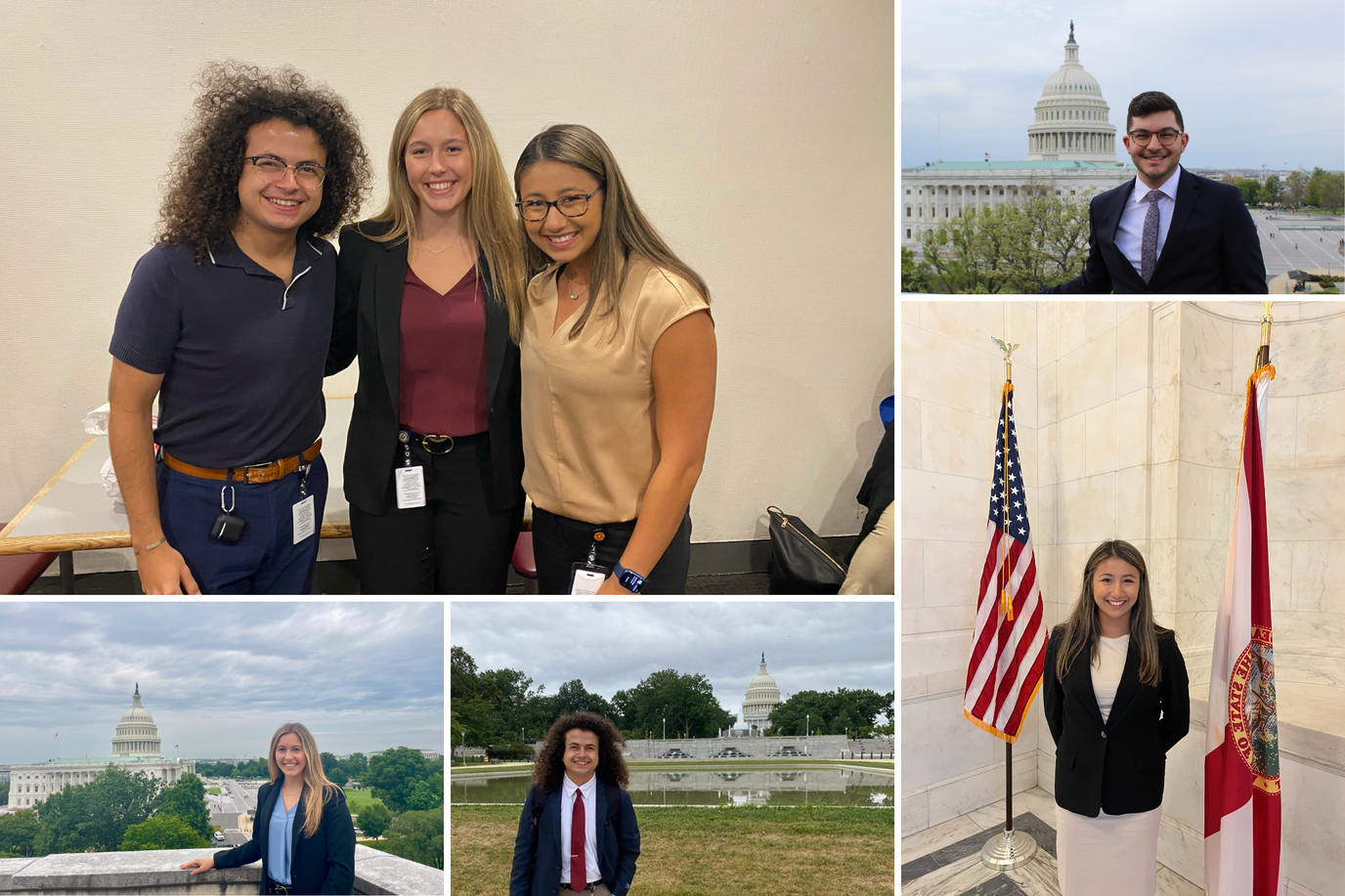 In anticipation of the recent midterm elections, we caught up with three Tars whose opportunity to intern on Capitol Hill allowed them to make real change in the heart of democracy.

On a summer day last June, Angelina Khourisader ’23 ’24MBA, Alexis Matton ’23, and Bobby Sena ’24 met for lunch. They were excited to see each other and share what they’d been up to in the weeks since the spring semester concluded. But they weren’t meeting on campus or at one of the restaurants on nearby Park Avenue. Instead, they were taking a quick lunch break just a few steps from the U.S. Capitol in Washington, D.C., where they were all interning for the summer.

With determination and a keen eye on the future, these three Tars are fueled by a desire to serve their country as changemakers. For months, they sat in on committee briefings and spoke with constituents. They wrote countless memos detailing some of the most pressing issues of our time. Most importantly, they applied the critical thinking skills and knowledge they’d gleaned at Rollins to every challenge that came their way. And in true Rollins fashion, they relied on each other for support.

As we head into midterm elections, we caught up with this group of Tars to learn more about their summer experiences on the Hill and what it was like to work in a place where history is being made every day.

Angelina Khourisader was already a pro by the time she arrived in D.C. The computer science major and current Crummer Graduate School of Business MBA candidate applied to intern in Sen. Marco Rubio’s Orlando office right out of high school.

“I was the second youngest intern ever to hold the position,” says Khourisader, who spent summer 2019 working exclusively on local constituent issues.

After that experience, she knew she wanted to apply again—this time to work in the D.C. office to round out her skills working on national issues. She was able to fulfill that dream through the Rollins Gateway Fellows Program, a highly selective funded internship program that gives students the opportunity to participate in some of the world’s most prestigious hands-on experiences.

But Washington, D.C. is one of the most expensive cities in the nation, and Khourisader knew that in order to meet her goal, she’d need help. She worked with team members from Rollins’ Center for Career & Life Planning on her Gateway application and earned a spot.

“I’m grateful to Rollins for always pushing me to pursue my passions and to find what drives me to make change in the world,” she says. “And for showing me the power of the liberal arts. Even though I didn’t major in something related to politics, I was able to connect with my passion for the political thanks to Rollins showing me that every discipline is connected. That mindset definitely helped me succeed this summer.”

Khourisader plans to pursue a law degree after her MBA with the goal of using her computer science knowledge and business acumen to become a patent attorney. And if all of that sounds far afield of politics, think again.

“When I started my internship, they asked us what we wanted to focus on, and that’s how I found out that the Senate handles quite a lot of legislation related to intellectual property,” she says. “In fact, two of Sen. Rubio’s staffers work on IP law under their umbrella of responsibilities. I got to sit on several committee meetings pertaining to that particular issue, each related to proprietary technology within different industries—from defense to health care to education.”

When political science major Bobby Sena stepped into his role as an intern for U.S. Rep. Daniel Webster, it was like a classroom discussion session come to life thanks to the Gateway Fellowship he earned to intern in Washington.

“One of my favorite classes was Introduction to American Politics with political science professor Pavielle Haines,” he says. “In that course, we focused a lot on the House of Representatives and what they do, so I felt prepared for my experience over the summer before I even set foot in D.C.”

Sena also relied on his experience as a senator in the Rollins Student Government Association (SGA), where he advocates for issues pertaining to the student body on a regular basis. He found that experience particularly useful when it came to writing opinion-based memos on behalf of Rep. Webster’s office to be delivered to other members of Congress.

“That was fascinating because it allowed me not only to learn about issues such as gun legislation, but to learn about them through Rep. Webster’s lens, which represents what he feels are the best interests of his constituents,” says Sena.

Another perk of the job? Sena got to lead tours of the Capitol building. As someone who enjoys sharing the democratic process with others, the tours allowed him to develop an even greater sense of the inner workings of Congress. He was even able to document parts of his experience on social media, thus sharing it with an even wider audience of his peers.

“My biggest takeaway from my summer internship was just how much of an impact young people can have on government and policy,” he says. “My generation, Gen Z, are some of the most passionate people you’ll ever meet, and they’re working in government right now. They’re interns who will become staffers, and those staffers will eventually become senior officials or perhaps even run for office themselves. The Capitol building is full of 20-somethings who are the future of politics.”

While most people find internship leads through online marketplaces or their college career departments, Matton found her summer internship via an unlikely source.

“I was actually scrolling through Instagram when I came across a post from the Rollins political science department advertising positions in U.S. Rep. Stephanie Murphy’s office,” recalls the political science and social entrepreneurship double major.

Matton had been accepted into American University’s summer program, which invites students from around the country to take classes in Washington, D.C. and follow up their summer courses with an internship in the city. She was excited to take politics and law classes in the nation’s capital, but she hadn’t quite figured out the internship component yet.

“At that point, I was looking at other opportunities within the Justice Department and a few nonprofits. But the Instagram post highlighted Rep. Murphy’s connection to Rollins, and it seemed like a great opportunity to spend the summer around actual policymakers. I applied and got the job.”

For eight weeks, Matton attended congressional briefings, worked on legislative projects, and assisted on constituent casework. She also attended the Intern Speaker Series, where she was able to hear from respected leaders like Sen. Cory Booker, Speaker of the House Nancy Pelosi, and John Tien, deputy secretary of the Department of Homeland Security. One major highlight involved attending the Women’s Congressional Staff Association Summit, a bipartisan organization that promotes career development opportunities for women on Capitol Hill.

“That summit was such a great networking opportunity because there were people in attendance from interns all the way up to chiefs of staff,” says Matton. “It was really cool to have that one-on-one time with some incredible mentors and hear from so many powerful women about their careers.”

A pivotal moment during Matton’s internship came when she had the opportunity to work on environmental policy, which allowed her to merge her interests in public policy and sustainability.

“That’s a vector of interests that I share with Rep. Murphy,” says Matton. “Through her office, I was able to provide additional research on the proposed Climate Change Education Act, which aims to increase climate literacy in schools and would implement an environmental education program for schools to include in their curriculum. I was able to pull from so many of my experiences at Rollins during this project—from the meaningful engagement I’ve cultivated with peers and professors to public speaking skills that I’ve honed over the years. And I gained new skills, such as drafting legislative memos, that are essential if you want to work in politics in D.C.”

Matton had the opportunity to work with another member of the Rollins community during her time on the Hill. Justin Karlins ’20 graduated with a political science and sociology double major before landing a gig as a finance assistant on Rep. Murphy’s 2020 reelection campaign. Afterward, Murphy asked Karlins to stay on in her Orlando office, where he served for another two years. He recently made the move to D.C. where he has taken on his biggest role yet—staff and press assistant for Murphy’s team in Washington. In his current role, Karlins creates content for the congresswoman’s social media channels as well as press releases, newsletters, and constituent correspondence.

“My time at Rollins prepared me for a future of service and responsible leadership,” says Karlins. “These are the values that I carry with me today. Responsible leadership and a service-focused mindset are essential to success on Capitol Hill. If you’re not on the Hill to better the lives of the people you serve, you should not be there. I’m forever grateful to Rollins for emphasizing those values throughout my courses and the campus culture.”

He adds that one of the best parts of his job is getting to welcome other Tars to D.C. and help them on their own journeys as they work to effect positive change in our society.

“Washington, D.C. has a vast network of Rollins alumni who work in different capacities,” he says. “I’m always happy to help fellow Rollins students with guidance and mentorship wherever possible. I was fortunate to have great mentors at Rollins who helped shape me into who I am today. I was in these students’ shoes not long ago, so I’m happy to support the next generation to achieve their goals and dreams.”

See where our students intern and work on campus, as shared on their Instagram feeds.