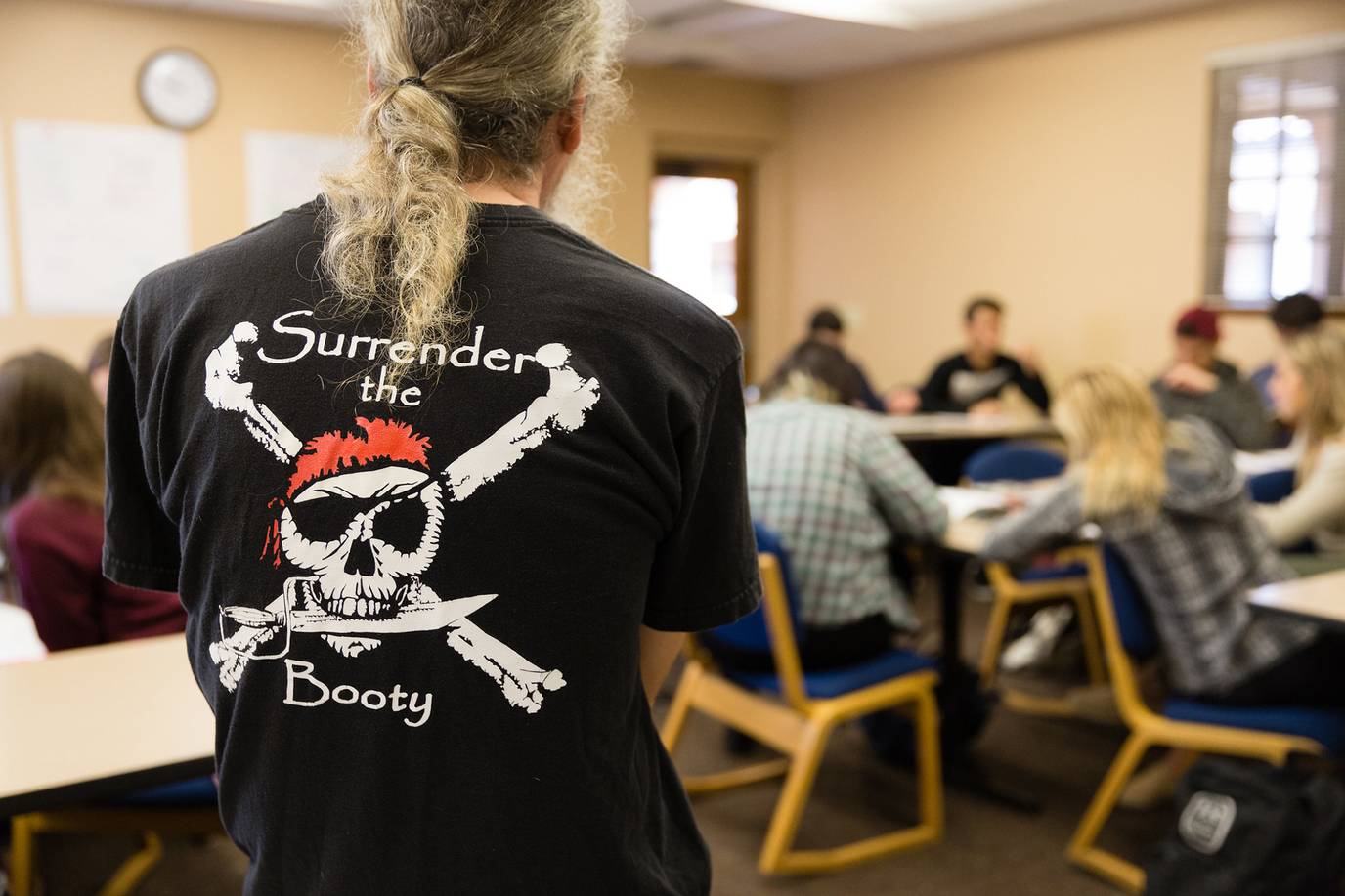 Examining the social and economic impacts of pirates throughout time—from Blackbeard to black-market bit streamers.

Ever streamed a movie before it hit theaters? Swiped a copyrighted photo for use in a PowerPoint? Downloaded “free” music?

We might not be hoisting the Jolly Roger or plundering gold-laden treasure ships, but chances are we all have a little modern-day pirate in us.

Mysteries and Marvels of Piracy

From the high seas to DVDs, this course explores maritime and digital piracy—acts that carry social and economic consequences, both good and bad. Beginning with the “golden age” of piracy in the Caribbean (early 1700s) to modern violations of intellectual property, students consider how piracy continues to exist and how it fundamentally changes society and culture.

“The class all knows about Capt. Jack Sparrow and the Hollywood version of pirates,” says Kozel, whose long beard exudes its own style of buccaneer bravado. “So it’s interesting for students to learn about the real historical figures. Where’d they come from? Why’d they do what they do? Pirates are a pretty remarkable group of people who don’t always fit the stereotypes.”

The course is broken into two parts: maritime piracy (historical and current) and intellectual piracy (property rights, digital, and biological).

When we stopped by class on January 26, the 19 students—all sophomores—were studying economics and politics on the ship. Peter Leeson’s The Invisible Hook—a twist on Adam Smith that reveals the self-serving democratic and economic forces behind historical maritime piracy—provided the basis for a lively conversation.

Mollie Thibodeau ’18, a communication studies major, has newfound appreciation for how piracy comes in many shapes and forms.

“I’ve quickly learned about the politics on a typical pirate ship,” she says, “the lifestyles of famous—or maybe infamous—pirates such as Blackbeard and Anne Bonny, and even how piracy relates to the new electronic day and age we have become so accustomed to.”

Kaylee Atwell ’18, a studio art major, has enjoyed studying the daring exploits of Colonial-era swashbucklers, as well as modern-day maritime pirates—such as those threatening the coast of Somalia and other well-traveled shipping lanes.

“They have more in common with piracy in the entertainment industry than many people realize,” she says. “This class is always entertaining and never fails to challenge my preconceptions of economic and social issues.”

For some maritime pirates of yore, it wasn’t all about gold doubloons. Yes, they were still motivated by loot, but these legendary bandits had an ethical side as well.

“For example,” Kozel explains, “when most pirates would board a ship, the first thing they’d do is ask the crew what kind of captain they had. If he treated his sailors well, a lot of times he and his ship would be spared. When serving under a bad captain, however, many of the sailors would choose to become pirates themselves. That was just one of the ways of promoting justice on the high seas.”