Cool Class: Sustainability Beyond the Classroom 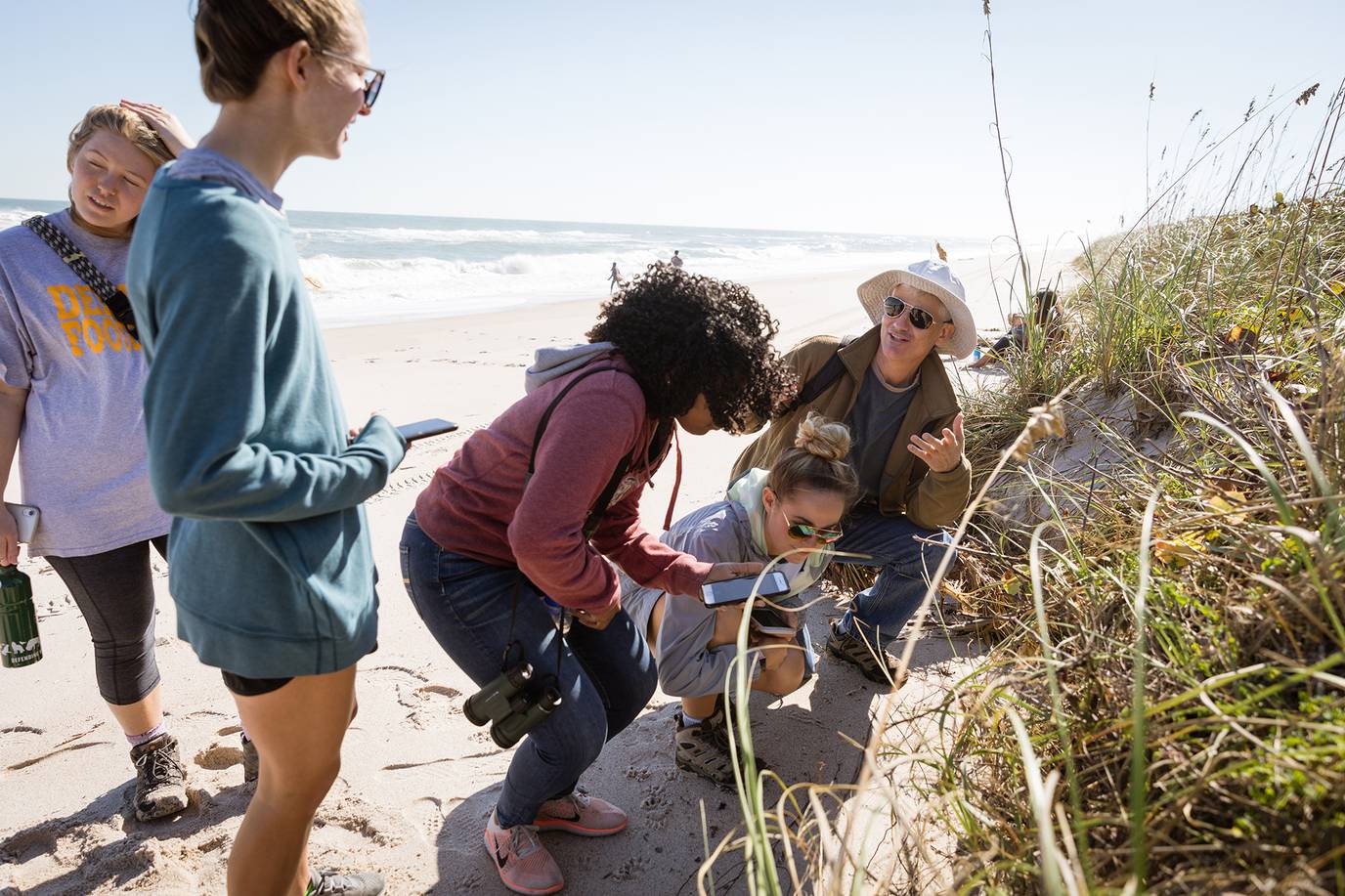 Go inside this series of linked environmental studies courses to learn how Rollins students are exploring sustainability issues right at the source.

It was like something out of a post-apocalyptic novel: A group of Rollins students had come to Sonoma, California, to study sustainability but instead found themselves in a hotel with no electricity. Pacific Gas & Electric cut power to tens of thousands of homes and businesses as a preventative measure to discourage wildfires from spreading in Northern California due to unusually strong and dry offshore winds. Meanwhile, 13 miles to the north in Santa Rosa, the state was ablaze.

This devastating situation turned into a teachable moment for the students enrolled in Sustainability Beyond the Classroom, a series of five linked courses taught by environmental studies professors Lee Lines and Barry Allen. One of the courses? Natural Hazards. The cohort had spent half a semester in Lines’ class discussing earthquakes, landslides, and wildfire, and now they were seeing the effects firsthand. Though the students were never in any danger—the power company was merely taking precautions—the experience provided them with a glimpse into the ways climate change, public policy, conservation, and capitalism intersect.

And that’s exactly the point of these courses: to deliver hands-on learning opportunities for students to apply classroom concepts to 21st-century environmental challenges in the real world and to inspire them to band together wherever they are to form a community of creative problem solvers.

In 2007, Lines and Allen wanted to create an immersive, semester-long experience combining classroom instruction with ongoing field studies and project-based learning, The result? A series of five linked courses that include field studies scattered throughout the semester. After a successful run in 2007, they repeated the immersion in 2009, 2012, and fall 2019.

“The whole idea is for this to be a true learning community,” says Lines. “The benefit of having the same 14 people together in every class throughout the whole semester is that it makes the class discussions more meaningful and fluid.”

Here’s how it works: Lines and Allen each teach two courses. In the case of the most recent semester, Lines took on Natural Hazards and Food, Culture, and Environment, while Allen taught Public Lands and American Environmental Thought. They co-taught the field component, which served to underscore the unifying theme of all the courses, Sustainability in Practice. During the semester, the group visited a number of state parks around Gainesville, Florida, spent nearly two weeks in California, and did an overnight trip to the Canaveral National Seashore on Florida’s east coast, all the while applying concepts they had learned in the classroom to real-world environments in need of innovative solutions.

“While we were in California, the students conducted interviews with different people, including farmers, residents, and park rangers, which really allowed them to put what they were learning to the test,” says Lines. “One of the texts the group read in the Public Lands course was The Oyster War about a small, family-run oyster farm located inside the boundary of the Point Reyes National Seashore. Now the students were able to travel to this site and talk to members of the community in person.”

In late November, the cohort traveled to Titusville, Florida, to kick off an overnight trip focused on topics covered in the Public Lands and Natural Hazards courses. After a night of kayaking through the Indian River Lagoon, we caught up with the environmentalists on a morning visit to the Canaveral National Seashore, where they learned about the history of the area’s designation as public land and discussed barrier island geomorphology in relation to climate change and hurricane risks.

One of the students brought a rock to Lines, a physical geographer who identified the specimen as coquina limestone, a type of sedimentary rock made up of tiny cemented shell fragments from the ocean floor. Lines explains that the rock is shaped by periods of rising and falling sea levels. As sea levels recede, the rock is exposed to natural elements, including rain, which is often acidic. The acid dissolves calcium in the limestone, giving the coquina its signature porous appearance. “The rocks tell a story, says Lines, “and are a sign of shifting coastal conditions.”

“Dr. Lines mentioned to my brother that a spot had just opened up in the immersion courses, and I thought it would be an interesting way to jump right into my Rollins experience,” says Mosquera. “Having the chance to do work in the field really tied together what I learned in my classes this semester. Real-world examples of things we read about and discussed in class provided a profound understanding of complex topics and issues related to sustainability in practice, not just theory.”

Laura Hardwicke ’11 is a grants coordinator for the city of Nashville, where she helps local government and community organizations secure funding for civic projects. As an environmental studies major at Rollins, she was able to participate in Lines’ and Allen’s 2007 and 2009 series of immersive courses, which formed a foundation for the work she does today.

“The courses showed me how to look at problems holistically, applying a mix of hands-on, community-based, and academic experiences to create solutions to community issues,” says Hardwicke. “This is at the core of my work on the Advanced Planning and Research team for the city of Nashville.” 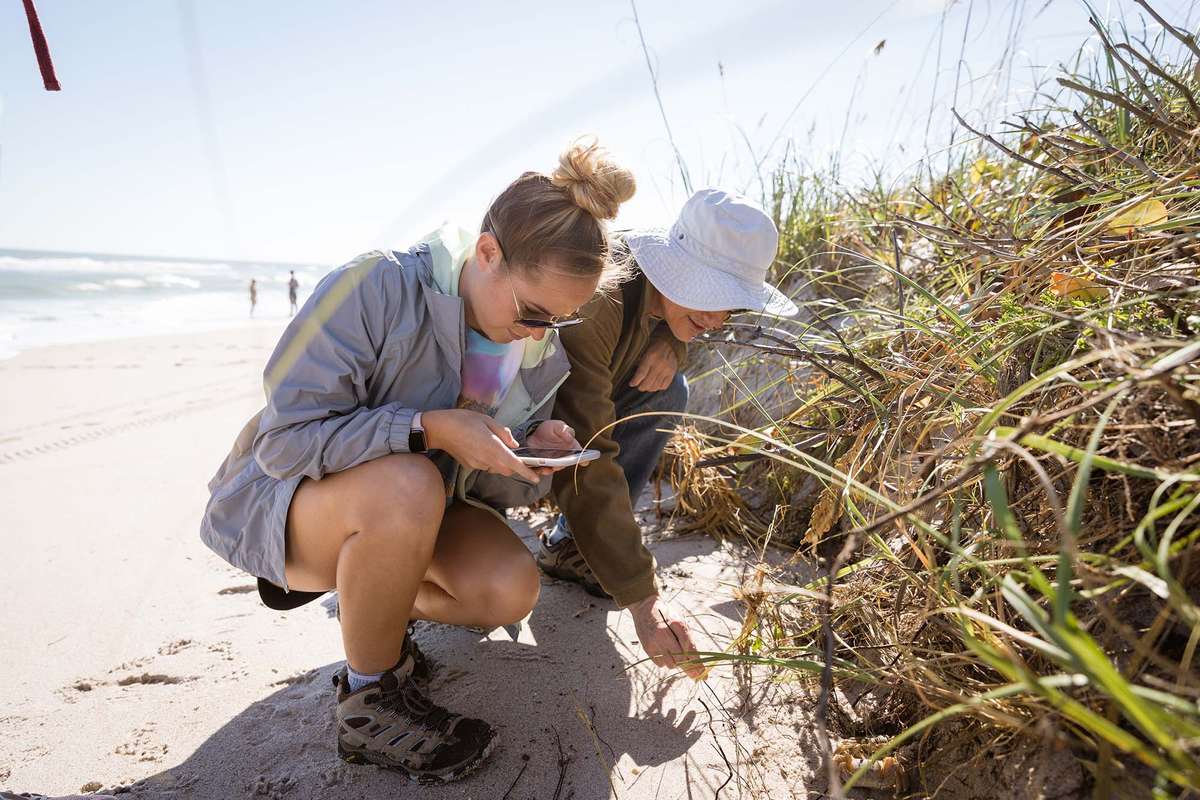 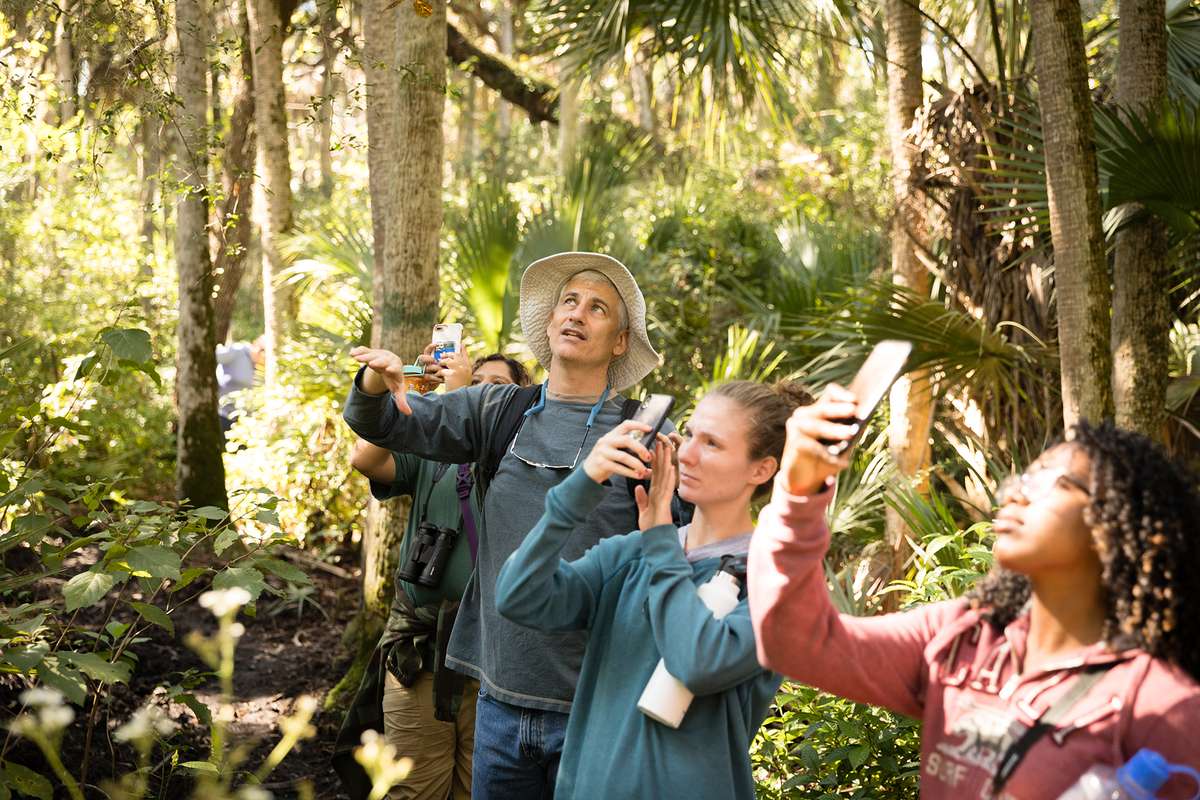 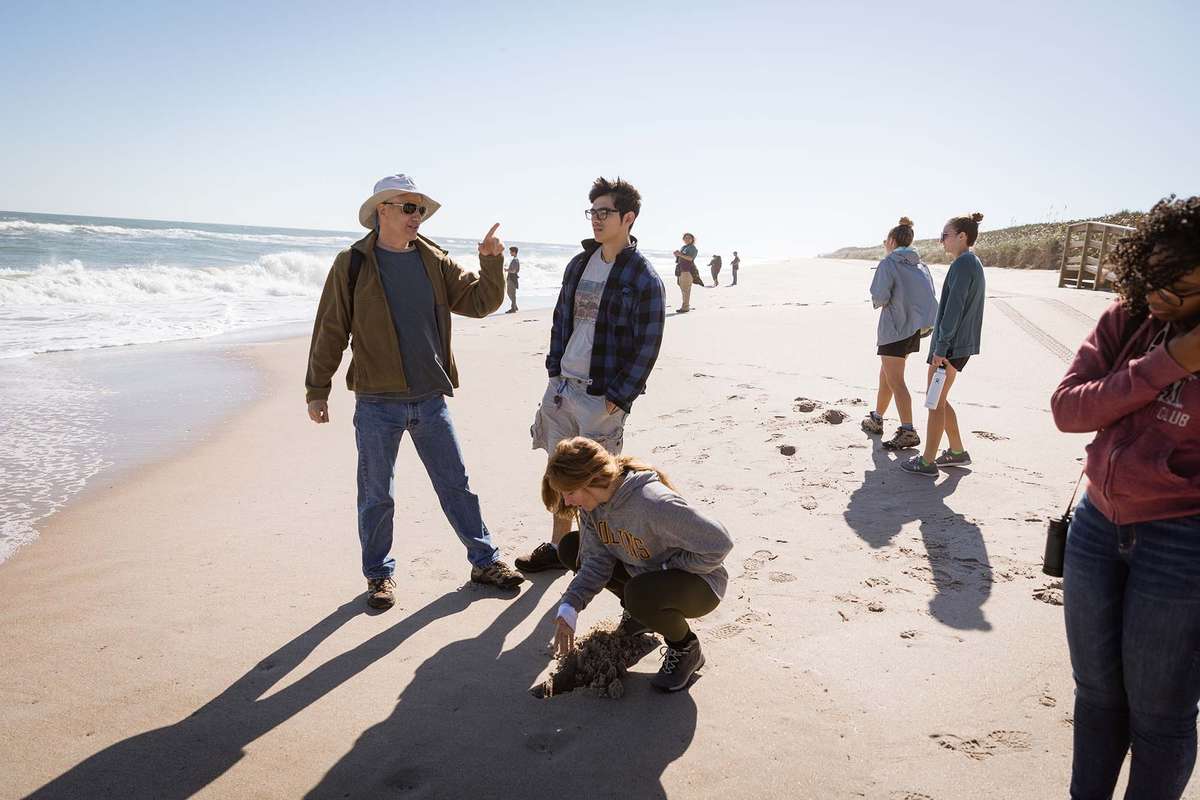 The federal government manages around 640 million acres of public land, which accounts for 26 percent of the United States’ 2.27 billion acres. At just over 57,000 total acres, the Canaveral National Seashore encompasses the longest strip of unspoiled beach in Florida, with 24 miles of undeveloped coast stretching along the Atlantic.

“One of the goals we have, not just for this project but for all of our students, is to get them out into the environment and have them establish a connection to the natural world,” says Allen. “This trip is an opportunity for some of them to see what a beach looks like without condominiums all over it.”

It’s easy to connect to the natural world once you know where to look, whether that’s in California or Florida, on public lands or a private organic farm. Rollins’ location provides prime access to ecologically diverse habitats containing urban areas, wetland, prairie, scrub, and coastal habitats perfect for hands-on exploration.