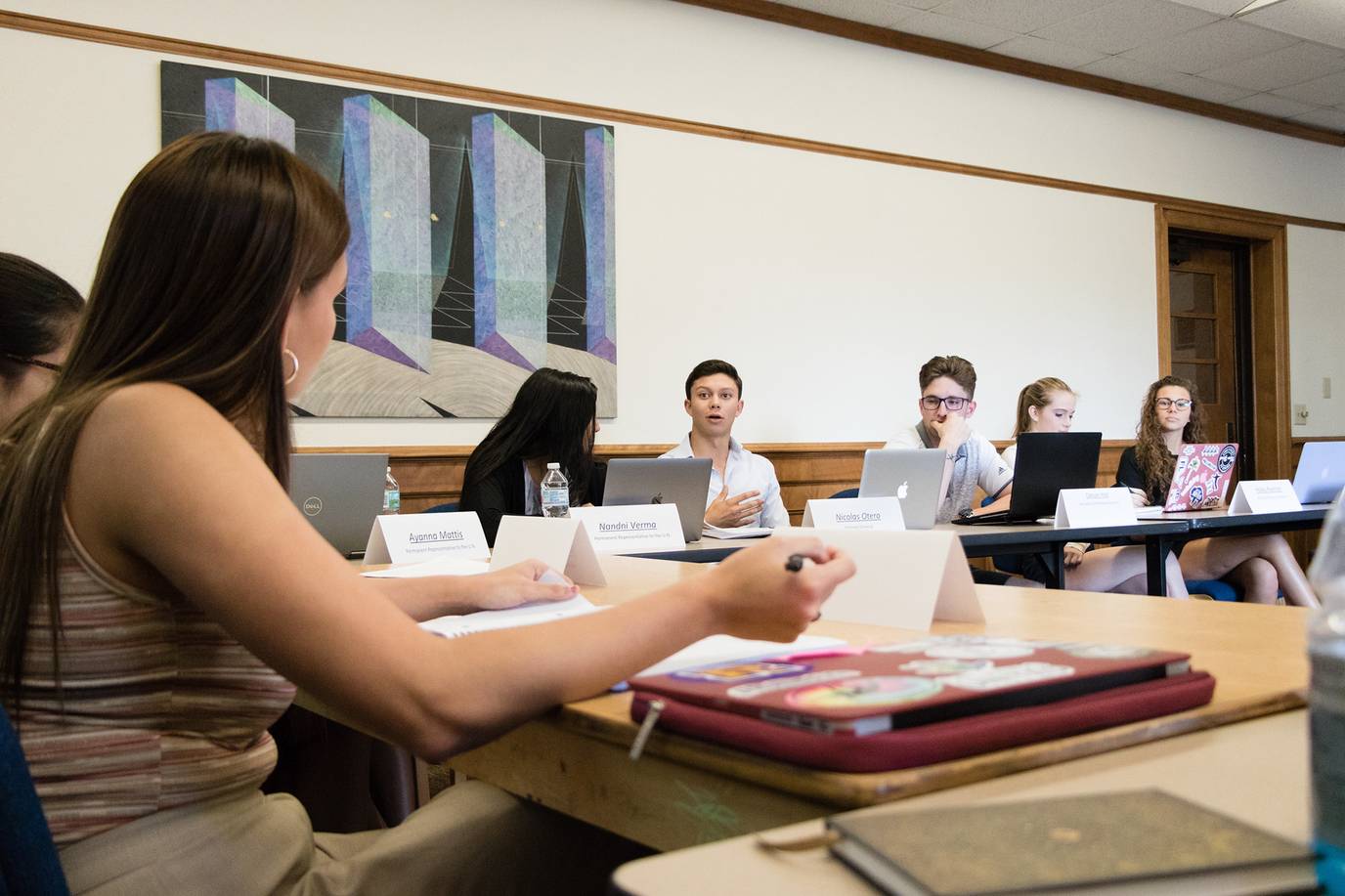 First-year students eager to dive into college get a crash course in how the world works and how they can be a part of changing the narrative.

Navigating the transition from high school to college is alone a tall order. Add to that a first-year course like Globalization—which centers on one of the 21st century’s largest and most nuanced issues—and the expectations just went up. Giving first-year students the chance to delve into complex topics like this as part of their Rollins College Conference (RCC) course is one of the core ways Rollins delivers on its mission to create global citizens and responsible leaders.

“The RCC is a model for students to understand what the collegiate experience at Rollins will look like,” says political science professor Joan Davison. “It immediately exposes them to Rollins’ commitment to active learning, small classes, participation and debate, and the encouragement of critical thinking.”

In addition to Globalization being an RCC, it’s also part of the 3/2 Accelerated Management Program that combines a four-year bachelor’s degree with a two-year MBA from the Crummer Graduate School of Business. Ambitious students enter this program having thought broadly about their education, and Rollins encourages them to do just that: to major in biochemistry if they’re interested in health-care policy, to study studio art if they want to run a museum, to focus on writing if they want to become a marketer or an entrepreneur.

The value of a liberal-arts base with an advanced business degree is unbeatable as Rollins prepares its 21st-century graduates to lead from pulpits of purpose, to dream up the big ideas but also have the know-how to implement them.

Why do some nations favor globalization and others don’t? What are the unintended consequences of globalization? What can governments do to counter the unwanted global webs of terrorism, human trafficking, and the drug and arms trades? These are just a few of the tough questions the students are tasked with tackling throughout the semester.

“Every day I look forward to keeping up with the students’ interest and enthusiasm,” says Davison. “They keep me young.”

The course is divided into four lenses through which to view globalization: political, economic, cultural, and ecological. From each of those perspectives, the students examine the benefits and disadvantages of globalization as well as the differential impacts, learning how and why some individuals, states, or governments benefit more than others.

“The very existence of the state and its borders is relatively new in human history,” says Davison. She continues by explaining how the first era of globalization tens of thousands of years ago when nomadic people spread out from Africa and Mesopotamia around the world, they carried their culture with them as opposed to being on the receiving end of new culture.

“These people were in control of their destiny, but since the 1700s, the states have controlled globalization,” says Davison, “and often the countries of the world pick and choose what kind of globalization they want.”

They’ll participate in free trade, for example, but not the Paris Accord, or they’ll invest monies abroad but don’t want to take workers abroad, etc. She asks the students to consider these differing interpretations of what the national interest is in a global world as well as to analyze what globalization means ethically. 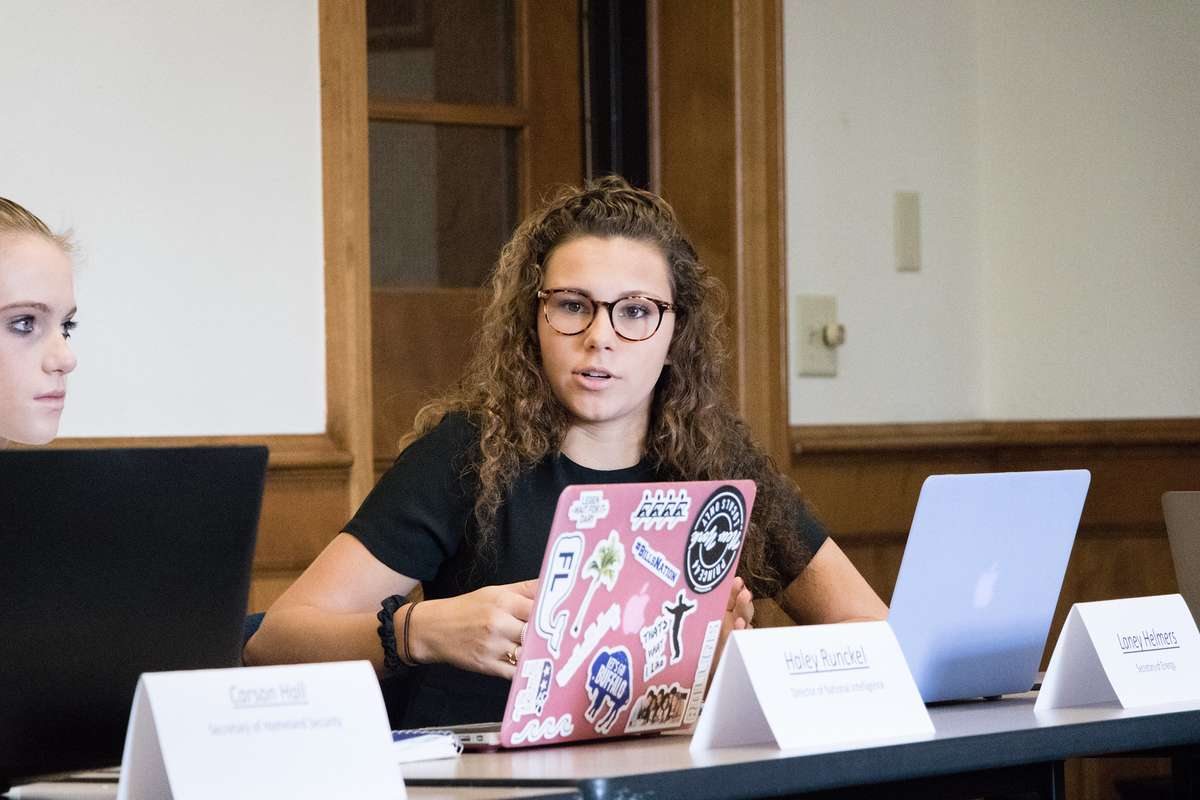 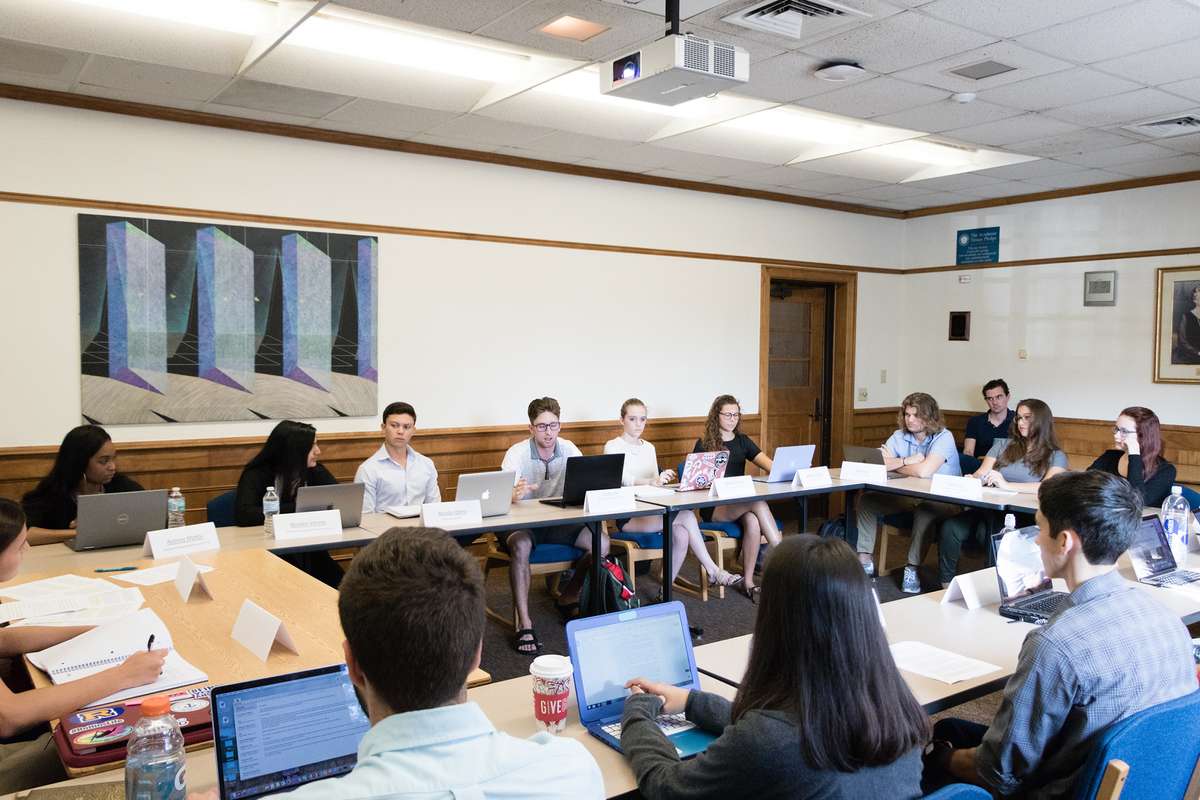 Davison hopes the students come away from this course understanding that globalization is complex and irreversible. For all the people who benefit, there are many who lose by no fault of their own. They suffer not because they’re lazy or don’t want to succeed, but because of where they live or that they worked in an industry that no longer exists.

Negative consequences that affect people and countries are challenges to resolve. “If we benefit,” says Davison, “then we bear the responsibility to identify solutions for the losers.”

We dropped in on the class on the first day of a three-day simulation of the U.S. National Security Council debating climate change policy. Each student was assigned a role: secretary of state, attorney general, EPA advisor, national security advisor, etc., and had to present the priorities and concerns of their particular agency.

Globalization produces winners and losers. This class accepted the challenge of considering how to address globalization’s differential impact. One solution is to follow the Bill Gates example: embrace effective altruism and use profits to save lives. Estimates vary, but the Bill & Melinda Gates Foundation has saved between 10 and 50 million lives, and they’ve done it by working with partners that help effect change globally and then scaling the solutions to a local level.