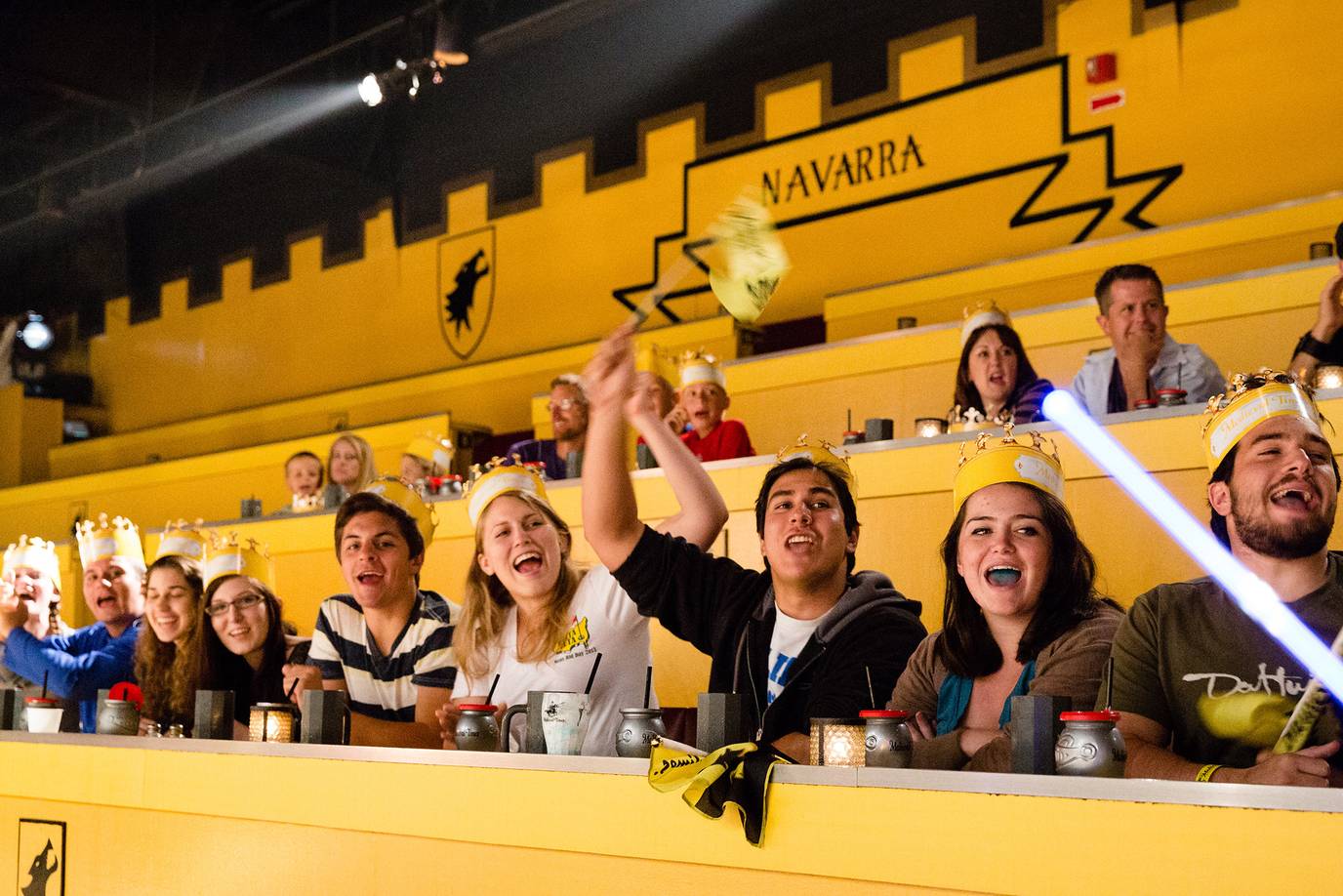 From The Hobbit to Medieval Times, a course explores the fact and fiction of the Middle Ages.

Inside the Olin Library’s archives, there is a sizeable collection of medieval manuscripts, ancient and worn songs and documents, often in Latin, covered in plastic and handled with gloves so as to preserve them. This collection came to Rollins in the 1950s by way of an anonymous benefactor. And on a Tuesday morning in early March, they are the subjects of a series of skits performed by students in Professor Jana Mathews’ class, called Dungeons & Dragons.

That’s a real course. And that’s its real name.

The goal, says Mathews, is to get students to “think about how the past and present interact.”

The intersection of Middle Ages romanticism and pop culture is inescapable these days. You see it in the Lord of the Rings trilogy, the Hobbit movies, and the hit HBO show Game of Thrones, just to name a few.

Which brings us to this course, and to the special collections room in Olin. The students have been divided into six groups and tasked with scripting and performing short plays explaining (fictitiously, of course) the mystery of how a particular medieval manuscript came to be housed at Rollins. As might be expected, some achieve this more effectively than others. One of the more clever groups, whose selected manuscript contains a Latin transcript of Psalm 21, traces its origin back to a rich man who showed it off to impress a duchess, then a descendent of his who awarded the psalm as a prize to a tournament winner (the jousting was done with umbrellas), then eventually to a Storage Wars–type auction in the 1950s, which was won by one Fred Rogers, who purchased the manuscript because, as the story goes, he liked the cardigans that were included in the auction. With no use for the ancient documents, he donates them to Rollins.

Earlier this semester, the students participated in a Hobbit-themed scavenger hunt and crafted medieval-inspired Valentine’s Day cards (which they sold to raise money for the Adult Literacy League). Then, on March 18, they ventured out to Medieval Times, the tourist attraction featuring a glamorized rendition of the era’s tournaments

On April 18, the class joined forces with the Barony of Darkwater, the local chapter of a group called the Society for Creative Anachronism (which focuses on recreating the arts and skills of pre-17th-century Europe) to host a medieval faire on the lawn in front of the library. There, students and Society members dressed in full regalia—long, flowing outfits that had to be rather uncomfortable in the stifling afternoon heat and humidity—hawked wares from that time period.

The students’ goal was to demonstrate what life at Rollins would have looked like in the 14th century. And so, on six tables spread along the sidewalk—sandwiching six tables with embroidery and other goods from the Barony of Darkwater—they had displays: one on medieval sports, showing an evolution of sorts between jousting tournaments and modern-day lacrosse; a medieval Fox Day, complete with instructions on beer brewing and actual fox hunting; palm reading and “Medieval Mead,” a nonalcoholic concoction whose primary purpose, it seems, was to draw attention to the fact that in the Middle Ages, people drank mead because they couldn’t drink the water (which, the table’s presentation informed us, may have been a culprit in the slowdown of societal progression).

Meanwhile, the Society for Creative Anachronism folks, adorned in their own flowing gowns, were seated at their four felt-covered tables, practicing calligraphy, showing off artwork, singing medieval songs. A seamstress was running cloth through an ancient-looking machine.

Behind the tables, students are attempting to pierce a ring with a javelin while “simulating” riding a horse (the simulation involves moving one’s feet in a manner imitating horseback riding, while another student uses a wooden tool to imitate the clacking of a gallop). Other students are playing darts.

Despite all the fun and games, this course still maintains its rigor. “I believe students learn best by doing,” Mathews says. “All of the experiential activities embedded in the course are not substitutes for the traditional form of learning in a literature classroom (i.e., close readings of literary texts), but rather complements to it. One of the biggest markers of this course’s success is how far my students have stepped outside the box in the pursuit of knowledge.”