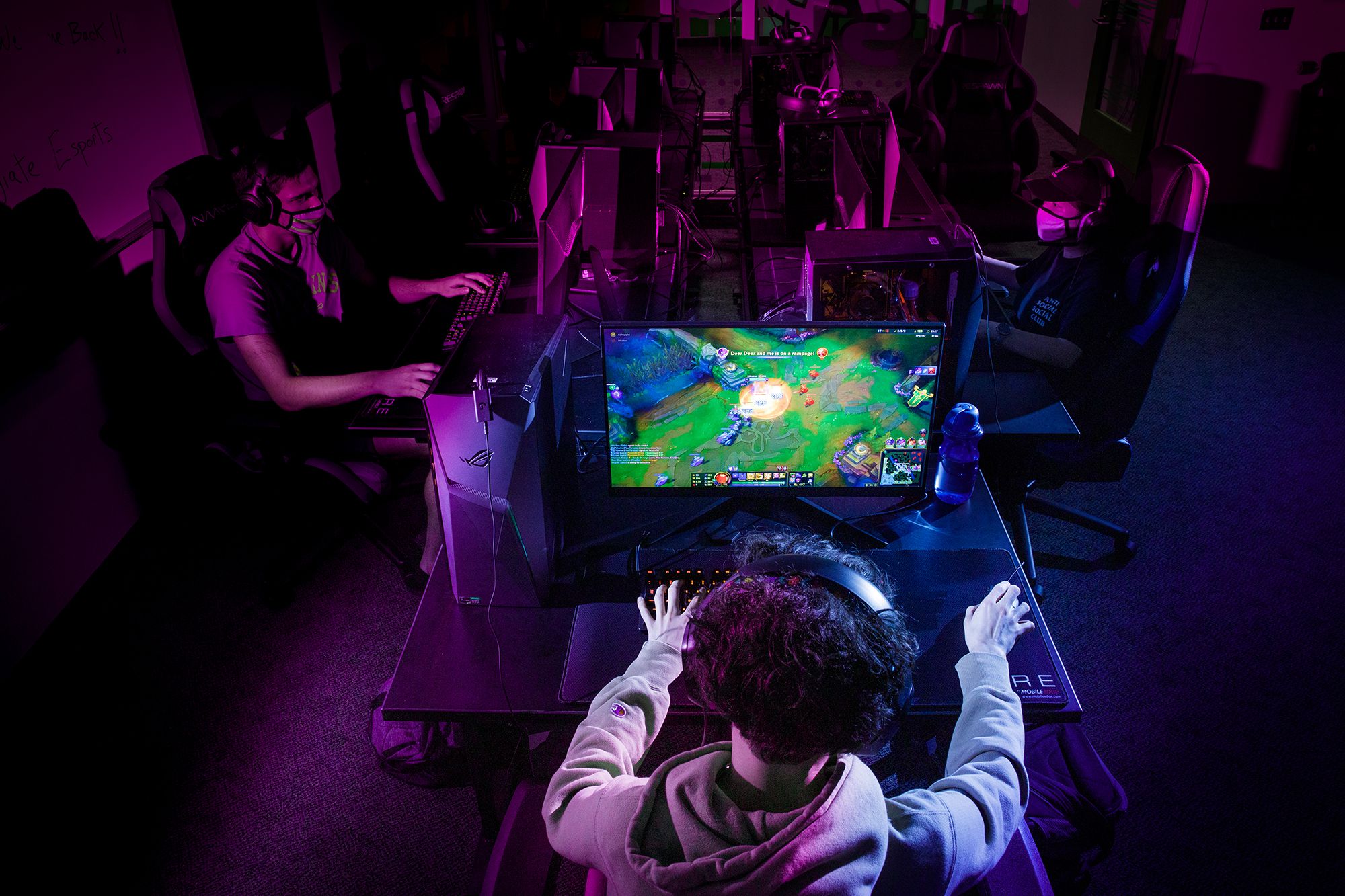 The Rollins Esports Club is one of the fastest-growing intramural sports at the College. Explore the club’s dedicated new digs and get a behind-the-scenes look at the world of LAN-style gaming at Rollins.

On a regular Monday night in late October, dozens of Rollins students sit watching their peers compete in one of the most popular games of 2020. One player gets hold of the ball and makes an effort to drive it into the net as onlookers cheer him on. He shoots and scores. The crowd goes wild.

At least, one can assume it did. The crowd wasn’t actually there. They were tuning in from all over campus as Rollins Rampage, the College’s newly formed esports team, streamed its first “Rocket League” match on streaming platform Twitch.

The student-driven initiative to bring esports to Rollins started back in 2018 when Ben Katz ’22 found himself playing a lot of “Rocket League,” a soccer-inspired game where players drive rocket-powered cars around a virtual pitch. “Rocket League” was one of the first games to gain traction on the collegiate esports circuit, and Katz wondered why Rollins wasn’t taking advantage of the large number of gamers on campus to start a team.

Katz reached out to Nate Arrowsmith, Rollins’ director of intramural and recreational sports. Turns out Arrowsmith had been thinking about ways to integrate esports into Rollins’ campus culture as well. In fact, prior to the pandemic and subsequent budget cuts, the athletics department had funds earmarked for a student club, but it had yet to press play.

“I saw this as an opportunity to get in on the ground floor,” says Katz. He recruited 12 like-minded gamers to join the team. Now, he serves as president of the Rollins Esports Club, which has grown to over 75 Tars. In addition to the Rocket League team, the club features teams in multiplayer online battle arena game “League of Legends.” Katz says they hope to add more teams in the future as membership increases and mentions esports staples like “Apex Legends,” “Dota 2,” “Overwatch,” and fighting game “Super Smash Bros.”

Rollins esports is for everyone, regardless of major or background, says Katz, who’s majoring in environmental studies with a computer science minor. Not everyone can afford to use their school computer to game, and high-quality gaming PCs often cost thousands of dollars. To make sure no one was left out due to lack of equipment, early adopters of the club worked with the administration and athletics department to turn an old classroom in the Alfond Sports Center into a LAN-style gaming center. The newly converted space is decked out with 15 computers featuring top-of-the line processors and graphics cards optimized for competitive esports.

The room serves many purposes. At the most basic level, it’s a place where club members can gather and relax after a long day or decompress between classes to clear their heads. It’s also a resource for PC gamers who might not have access to a tricked-out gaming computer. And it serves as Rollins Rampage’s home base and command center—a place where teammates can go to practice, scrim, or stream matches. Currently, only club members are allowed to use the gaming space, but new members are always welcome to join through the team’s Discord server.

Rollins is part of the National Association of Collegiate Esports (NACE). According to this organization, more than 170 college campuses across the U.S. have some sort of esports program on campus—and that number is growing rapidly. Embracing esports is a natural extension of the College’s mission to future-proof the college experience.

“Rollins is all about looking to the future,” says Katz. “I see esports as the future of collegiate competition. It touches on every aspect of traditional athletics—discipline, team pride, sportsmanship, and community—while being accessible to many people.” 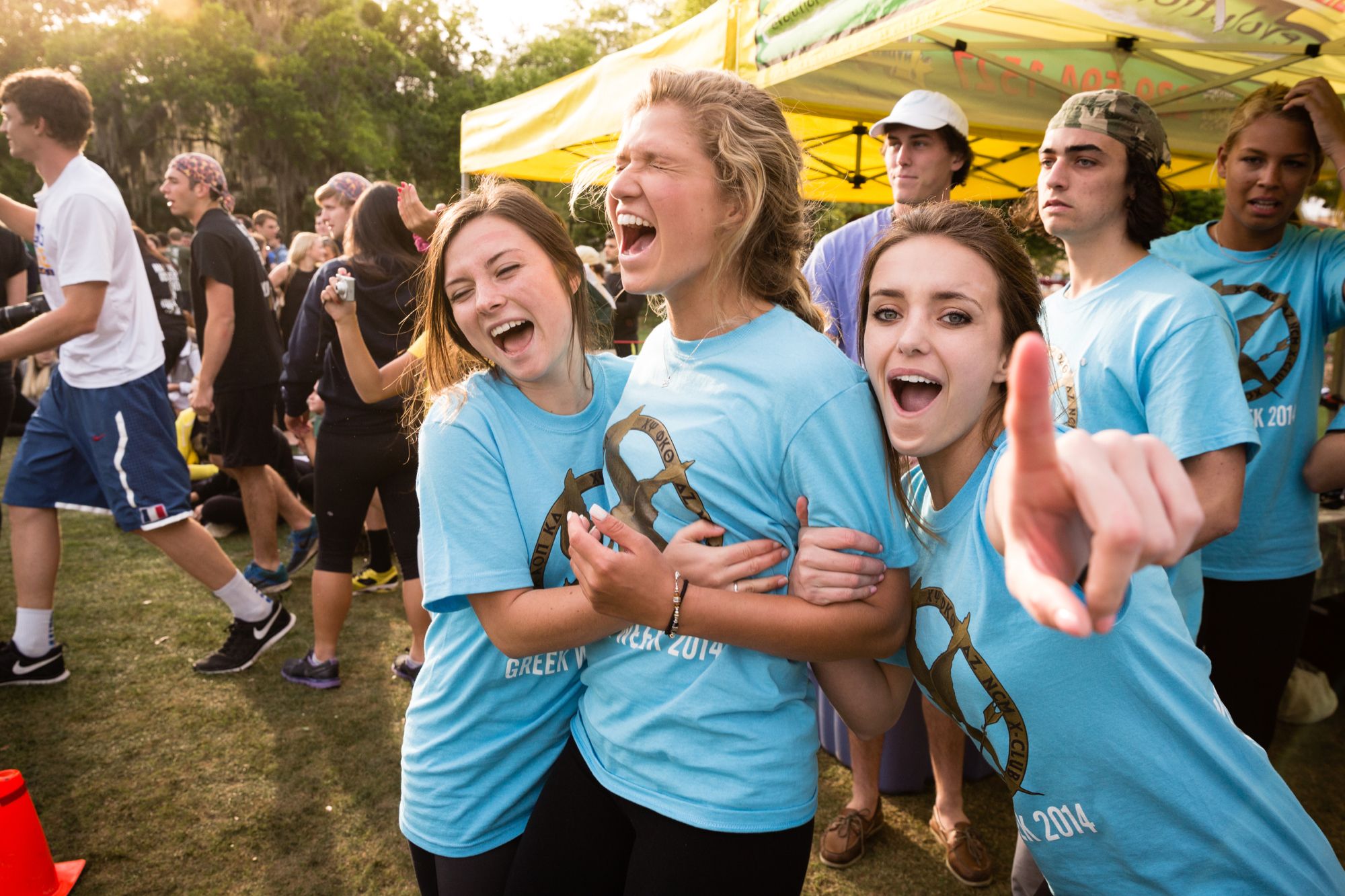