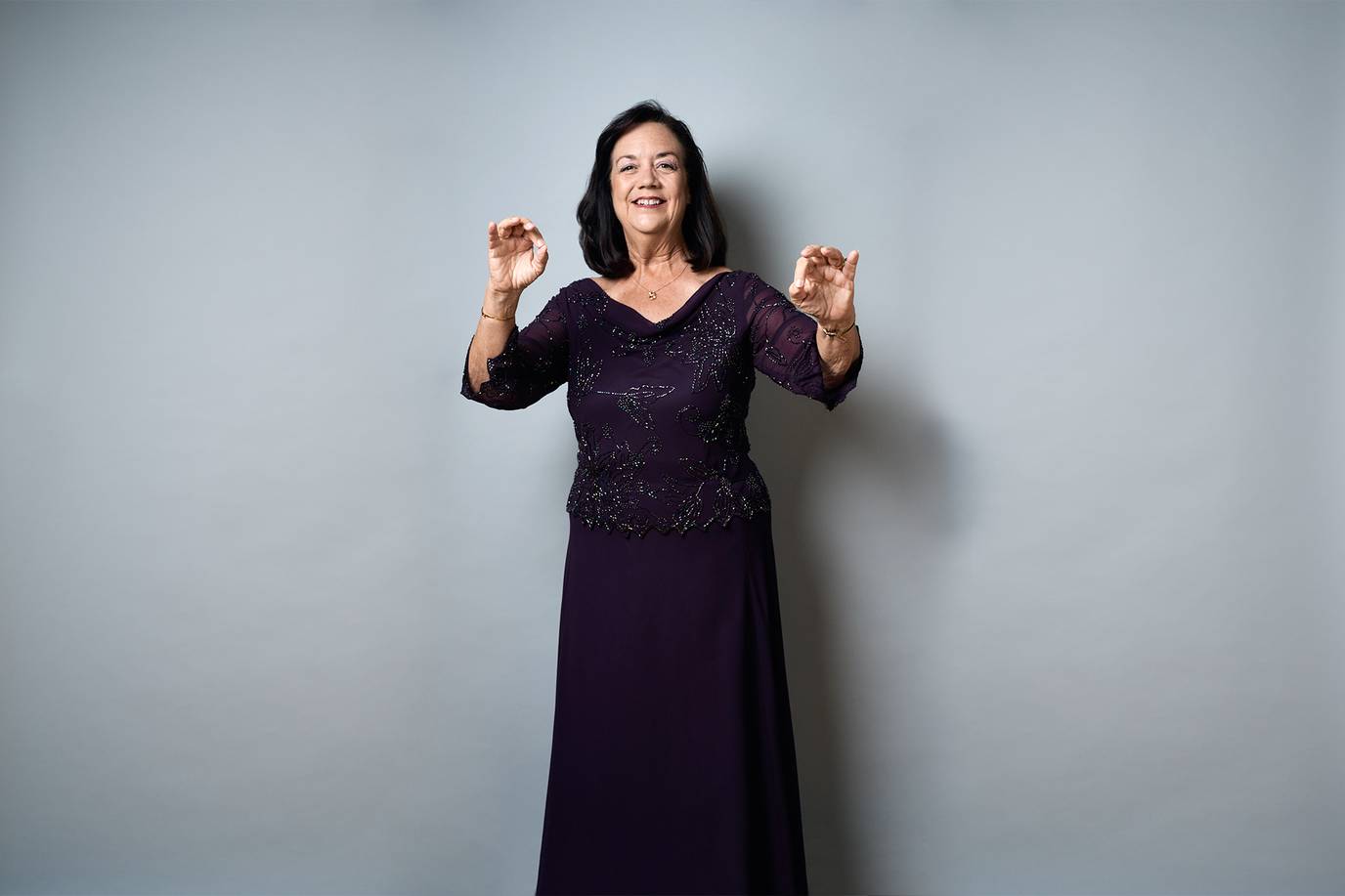 The music and theater double major reflects on a prolific career in choral music and her commitment to the next generation of performing artists at Rollins.

For Sally Albrecht ’76, music is the ultimate way to bring students together, a unifying force that helps them work toward a common goal.

She’s experienced that joy many times during a highly accomplished career that’s carried her, and many students, to such iconic venues as The Kennedy Center, Lincoln Center, and Carnegie Hall.

Yet it all started more than four decades ago at the Fred Stone Theatre—Rollins’ humble, longtime proving ground for aspiring stage performers.

“It was our home,” says Albrecht of the black-box theater, “and we learned to make magic there.”

Last summer, “The Fred” was demolished due to hurricane-related damage, forcing the student-run Second Stage Series it hosted to relocate.

Today, Albrecht—a composer, conductor, and clinician with more than 600 popular choral publications, plus multiple elementary songbooks, musicals, and instructional DVDs—is leading the charge to fund the venue’s next iteration.

We caught up with Albrecht, who lives in Raleigh, North Carolina, and presides over the Omicron Delta Kappa national leadership honor society, to uncover the secrets to her success and find out why she’s so committed to supporting Rollins’ next generation of performers.

Everything leads to something. There are all these little doors in your life, and you have to peek in and see if that’s where you want to go. At Rollins, doors were constantly peeking open, and I walked through them.

Rollins let me look to my own future and pave my own road, which was kind of an amazing thing, now that I look back. I’m not sure that opportunity would have been available to me at a conservatory.

When you’re involved in music or theater or sports, you can become very condensed in your life because you’ve got this focus on a concert or a production or a game, and it’s hard to get out of those circles. But at Rollins, you were encouraged to broaden your circles.

As a Phi Mu, it was such a potpourri of people who learned to live together, and, boy, the world could use a lot more of that right now.

I didn’t expect to be a choral conductor; that was not my major line of study. But Rollins gave me that opportunity (which led to a long career as director of school choral publications for two major educational music publishing companies).

When school budgets get cut, music is the first thing that gets questioned, but it might be the most important thing a student will learn. The transition that happens when you put a kid on stage and watch the confidence grow—that lasts for a lifetime. And I have the joy of putting those major music events together.

We need an experimental theater to complement the magnificent Annie Russell Theatre. A black box with seats that can move into different configurations—a theater in the round or a U-shape—plus a classroom.

I’m really excited about this new construction project because it’ll give Rollins state-of-the-art technology with a flexible seating arrangement for primarily student-run productions.

We’re going to have a place where we can develop triple-threat performers: singers, dancers, and actors.

Being at the right place at the right time had a lot to do with success for me. But being available, being intrigued and curious—all those things add up as well.