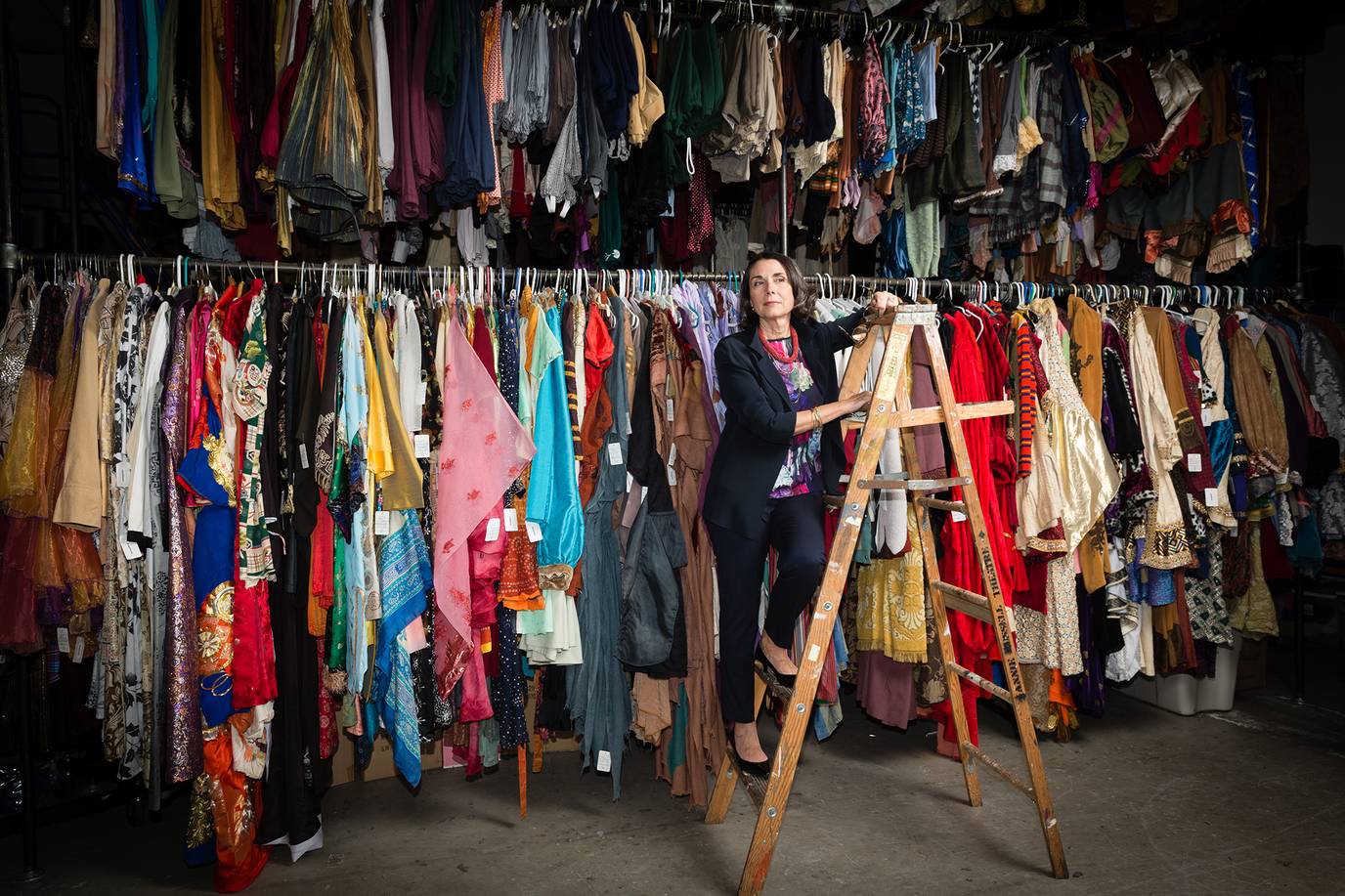 Looking back on a dream career that blended a love of art and theater, award-winning costume designer Maggie Delgado ’75 found the ideal mix of motherhood and showbiz.

Winner of five Daytime Emmys and recipient of the “Designing Woman” award from New York Women in Film & Television, Maggie Delgado ’75 has outfitted some of America’s biggest celebrities.

From Brad Pitt to Mikhail Baryshnikov, Susan Lucci to Meryl Streep, Delgado’s handiwork has outfitted actors in movies, TV dramas, theater productions, and commercials. But she counts being a working mom in New York City—juggling costume design for Big Apple-based soap operas As the World Turns, All My Children, and Another World—as one of her biggest accomplishments. Not to mention recently celebrating 40 years of marriage to her college sweetheart, fellow theatre arts major Bill Sheppard ’74.

These days, Delgado is freelancing from her home in Brooklyn, working on a variety of smaller-scale projects while also tending to her mother in Miami. It’s a long way from her roots as an 8-year-old whose family emigrated from Cuba to Miami with “five dollars and a suitcase” in 1960. To celebrate her 2016 Alumni Achievement Award, we asked Delgado to share what she’s learned along her journey.

Making it in this business requires a real passion. It’s all-consuming and intense when you get into the world of costuming. The jobs are not secure, so you really have to love it.

It was a nice journey but not an easy one. Every day was a new adventure.

Francis Ford Coppola (on the set of 1984’s The Cotton Club) was bigger than life. Watching someone of that caliber, it’s like he’s coming in and creating magic. Just amazing.

All actors are journeymen, so on the way up they’d use the soaps to get their shot and some would go on to become big stars. Then, at the end of their careers, they were able to fall back on the soaps to get work.

Rollins gave me an incredible opportunity to learn the craft. We basically did everything as theatre majors. We’d act, be one of the techies, we’d design, we could direct. We were such a tight group of students and spent so much time together. As the years have moved on, many of us have stayed close friends.

“Big breaks” often come in steps. For me, the more experience I got, the easier it became to find jobs.

Being a working mom in show business is very difficult. That’s why I wanted a steady job in television so I could raise my daughter, Emma (now 28). Having a family and traveling is not the best combination, plus the long hours. I was very lucky to have a supportive husband.

When you travel as a costume designer, it’s almost like you’re going camping and need to put everything in your backpack. That way, when you get the call from the set, you can go right to your wardrobe camper and know right where everything is.

Having a seamstress for a mom is a big plus. When I was in junior high, I got into sewing as well. I started with Barbie, and it evolved into my own clothes.

A liberal arts education allowed me to explore so many worlds and subjects, and it provided a really good foundation in my developing years to find my passion and become a more well-rounded person.

Fans will seek you out. I’d get lots of letters and questions. “How can I look like so and so?” “How can I have my wedding dress look like something you designed?” “Where can I find the earrings a certain actress wore in this episode?” I always wrote back and tried to be as helpful as possible.

I’d meet CEOs of companies who’d say, “Don’t tell anybody, but I’ve been watching your soaps since college.” People identified with those characters, and they got passed down from generation to generation.

It was sad to see the demise of soaps. But the world changes. We evolve and become something else.

When you dress a character, it really is based on what the script says. When you work at a coffee shop, I’m not going to find you clothes at the nicest boutique in town.

You can buy clothes anywhere—from a street vendor to department stores and craftspeople. In New York, every resource is available.

Experience is a wonderful thing. It gives you so much more confidence. I remember turning 50 and thinking, “Wow, I’m really free now.” You get to a point where you’re so much more comfortable with yourself.

I have a dream job. I’ve had the best time with what I’ve done. No regrets. When I make a decision, it might take me a while, but I’m behind it 100 percent. I’ve loved my journey. It’s been terrific.