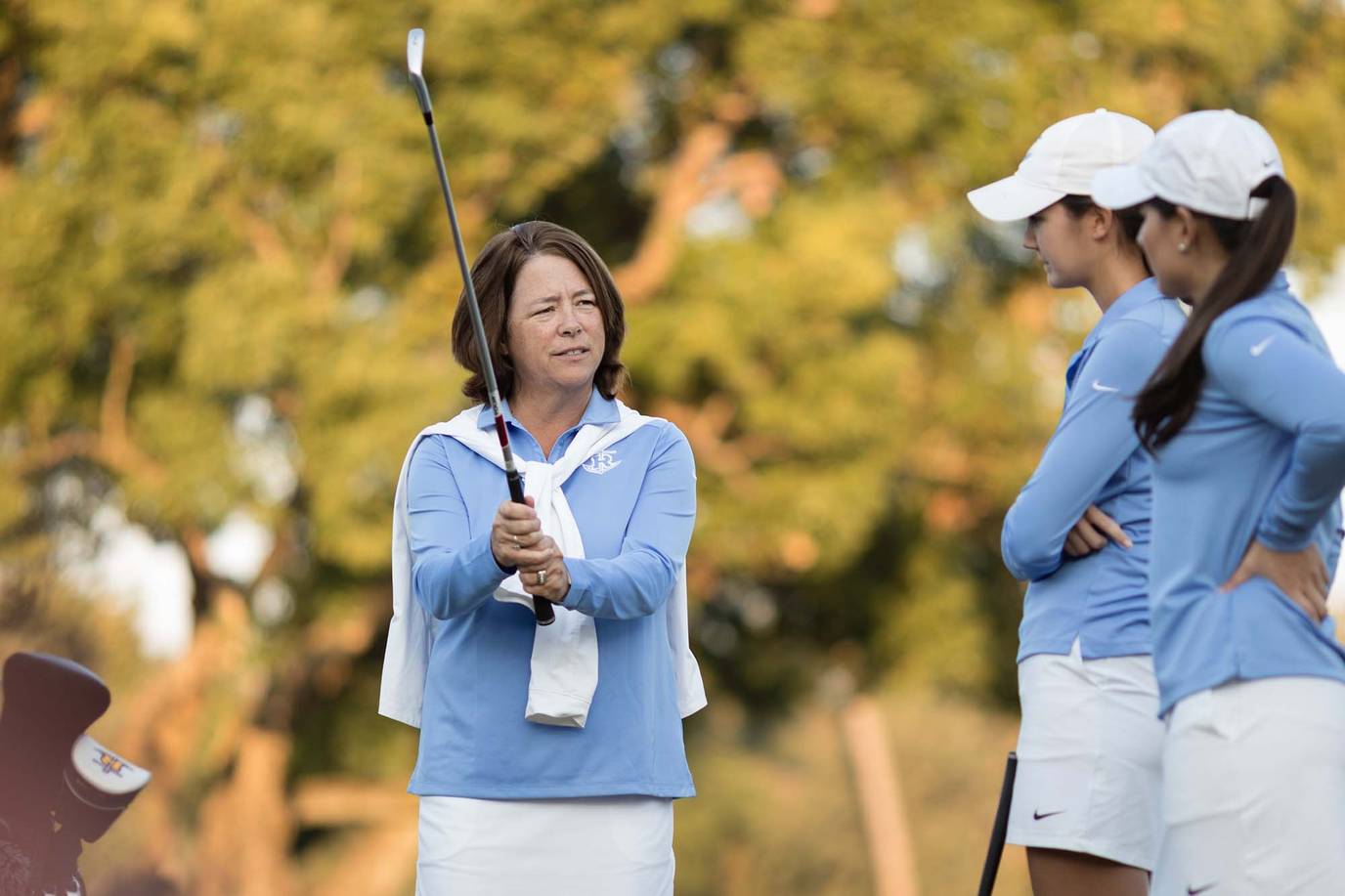 Hall of Fame women’s golf coach Julie Garner is guaranteeing a long-term victory for Rollins with a planned gift that’s as personal as it is generous.

Julie Garner opens the back of a custom Sprinter van and hoists a 60-pound bag of luggage into the rear storage compartment. Rollins’ head women’s golf coach is a legend. She’s won an unprecedented six national titles and owns a spot in the Women’s Golf Coaches Association Hall of Fame. But for these next few days she’s a self-appointed chauffeur, driving players to Orlando International Airport. This morning Garner is shuttling one of her student-athletes to catch a flight home to Sweden.

“You sure you have everything?” asks Garner before also making sure the player’s seatbelt is fastened. As Garner says, “My first priority is to make sure every player gets safely from point A [the Rollins campus] to point B [home].”

The point B yesterday was Sweden. Tomorrow a player will fly home to Germany. Garner cherishes the 40-minute rides, even if they are bittersweet.

“The relationships are more important than ever,” she says. “I want to win, but I’m not as intense as when I started at the age of 21— although I’m not sure my current team would think that’s possible.”

Back in 1984 Garner had no idea the girls were absorbing her lessons about life. In fact, she left Rollins twice for enticing corporate jobs: Disney in 1987 and Nike 10 years later. But something about Rollins kept pulling her back.

“I missed the energy,” she says. “Whenever I’d leave or hear about a coaching position at a bigger school, I’d think about the mission at Rollins to prepare students for global citizenship. That’s me. And the golf course is a great place to prepare them.”

Garner gathered golf-is-life analogies from her own mentor, Rollins alumna and golf legend Peggy Kirk Bell ’43, who would say, The ball doesn’t lie. Wherever your shot lands will tell you what you did right or wrong.

“That’s how life works,” says Garner. “Learn from your mistake and fix it next time, but for now … you need to figure a way out of this mess.”

One of Garner’s messiest situations happened after her first year at Auburn when the new athletic director dropped women’s golf.

“I only had a few weeks to figure out a new path,” says Garner, who transferred to Auburn’s in-state rival, Alabama. “Golf taught me resilience, and I used it to make something good happen.”

Garner knows that the world is different for today’s student-athletes. It’s smaller and faster. She understands the demands on the players’ time, a pressure she feels as a coach too. It feeds into another of her favorite life lessons.

“You’ll have time for what you want to have time for. So think about investing your time rather than spending it.”

She applies the same wisdom to money, which led her to set up a planned gift of her estate to Rollins College. Specifically, the money will endow a women’s assistant golf coach position well into the future.

“It isn’t the type of gift Rollins expected,” says Garner. “But I know the needs from my peek behind the curtain. The money won’t go toward uniforms or equipment. The vision is much bigger and longer-range than that.”

Garner’s assistant coaches have freed her up to focus on bigger projects and to work with every player to make differences in their own communities. One former player served food to underserved people in Brazil during the COVID-19 pandemic. One is a social worker in New York. Another works at the nonprofit First Tee, weaving lessons about life into golf just like a certain coach and mentor she once had.

“You never know when you might be getting through,” she says.

A while back she received a package from a former player who had seemed impervious to her lessons. In it was the book Tuesdays with Morrie, which details the impacts of a college professor on the author later in life. The card inside read, “Thank you for your patience, Coach Garner. You’re my Morrie.”

The note surprised Garner. It also inspired her.

“The endowment gives me the peace of mind that future Rollins coaches will not miss teachable moments because they’re too busy doing the work of two coaches.”

As she turns the van toward the Rollins campus, she says she wants to stress two points. One is a joke: “Sadly, I’m now worth much more to Rollins dead than I am alive.” And the other is a pay-it-forward thought: “I hope this will motivate others to give so we can send Rollins students into the world to make a difference. When it comes to that, I’m all in.”

It Costs Nothing Now

A planned gift allows you to support a cause without giving anything you need while alive.

You Can Give More Than You Realize

Donors who could never imagine giving $10,000 or more can do exactly that through life insurance or a gift annuity.

Your Gift Could Be Doubled

Let’s say you designate $250,000 to beneficiaries through a Charitable Remainder Unitrust (CRUT) and they receive the 5 percent earnings from the CRUT per year for 20 years. The entire principle of $250,000 is still left for a charity.

A planned gift can be funded through an IRA, stocks, or personal property, greatly reducing tax burdens.

You join a prestigious group at Rollins with exclusive invitations to events and recognition on the College’s Honor Roll of Donors.

For additional information on the benefits of planned giving and to learn more about how to leave a planned gift to Rollins, contact Beth Fontes, senior director of gift planning, at 407-646-2508 or efontes@rollins.edu.