Tales of a Female Comedy Writer 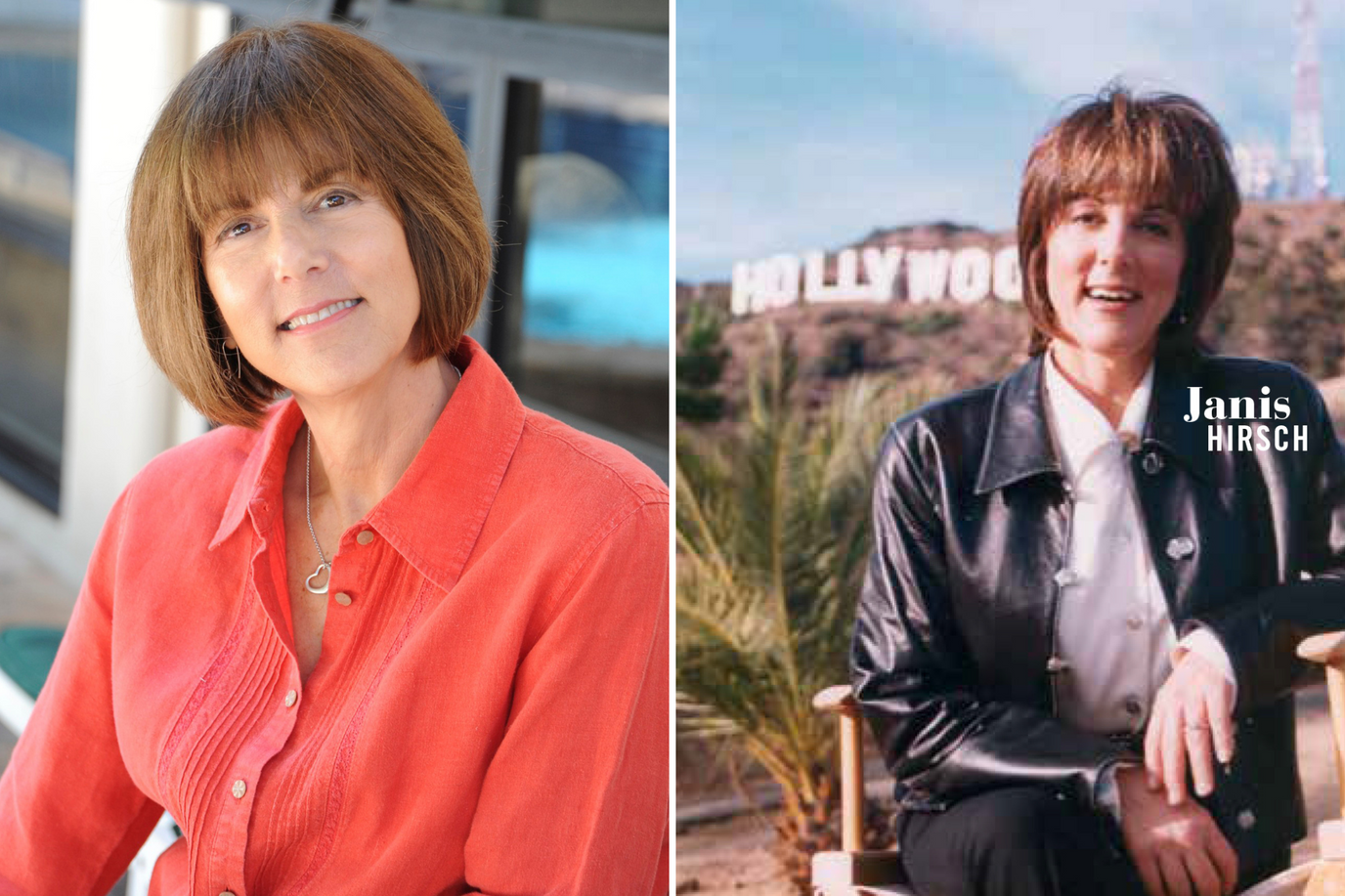 Janis Hirsch ’72 has worked with Bill Murray, been fired from the same gig as Larry David, and written and produced award-winning shows like Murphy Brown, Frasier, and Will & Grace.

Janis Hirsch ’72 is a great storyteller with a fondness for her college days. So she wishes she had a rousing tale about how a Jewish girl from Trenton, New Jersey, who had never visited Florida, and who was using crutches as the result of contracting polio as an infant, wound up at Rollins College in the late 1960s.

She’d like to relay how the school’s reputation for scholarship and inclusiveness inspired her. But she was swayed by something else.

“It was warm, and there was no math requirement,” says Hirsch, who went on to write and produce for some of TV’s most successful sitcoms. “I wish it was more complicated. I wish I could tell you it was because of the faculty or the traditions, but it was warm and no math.”

She recalls making her decision during a very messy, snowy winter in New Jersey. Flipping through a guide to colleges, she spied photos of a tropical landscape called Rollins. That was that. “I told my mother, ‘I can’t take this anymore. I walk with crutches, and why should I keep schlepping around in this slush?’”

Her choice was a wise one. But it was just one stop on a circuitous route to Los Angeles, where Hirsch lives now with her husband and son while continuing to rack up a glittering list of credits, including Frasier, Murphy Brown, Will & Grace, 8 Simple Rules, Square Pegs, L.A. Law, The Nanny, My Wife and Kids, and Bette (starring Bette Midler).

She’ll touch on those and the challenges of being female in what remains the majority male domain of comedy writing in a free public talk at 7 p.m. on November 6 at the Bush Auditorium. “I’ll tell the good, the bad, and the ugly,” she says.

Though she’d never visited the Sunshine State before moving to Rollins, Hirsch found that the college’s size and strong theatre program suited her well. Of course, there were a few false starts.

“I was a pinball, trying this and that,” she says. And despite feeling that her Northern Jewish roots made it hard for her to connect with some students who displayed Confederate symbols, Hirsch credits Rollins as the place where she made lifelong friends. And it’s where she rekindled a spark that started in the third grade.

She still remembers the day her parents took her to a Broadway showing of Flower Drum Song. Young Hirsch was entranced. “I didn’t know I could feel that happy. I went home, turned on the TV, and started scouring the credits at the end of The Mickey Mouse Club, trying to figure out what job I could do. I didn’t want to be an actor, and I didn’t know what a grip was.”

Somehow a vague notion of being in show business remained in the back of her mind until one day she found herself in the Annie Russell Theatre. Something clicked again, and she knew she wanted to learn everything she could about putting on a show. “Who knew lighting could be so fascinating?”

Following graduation, Hirsch flung herself toward the entertainment business, not getting very far at first, but having funny encounters along the periphery.

One of her early jobs was working for a woman, who by then was known as the world’s oldest stripper. Nonetheless, the woman managed a legitimate and profitable theater in Massachusetts that provided real-world business experience. Then Hirsch played a small role in the National Lampoon yearbook parody, assisting in various jobs and posing for photos in the publication that spoofed high school yearbooks from the 1960s. “I was Ursula Watersky, the handicapped nerd.”

The satire might not win medals for political correctness today. But in the early 1970s, it was a roaring success, and Hirsch describes her association with the National Lampoon magazine and radio show in New York as “a magical time,” during which she got to know some great performers and writers, including Bill Murray, John Belushi, and Gilda Radner, all before they achieved celebrity on Saturday Night Live.

Indeed, it was Lampoon editor Doug Kenney, later the co-writer of Animal House and Caddyshack, who wanted to borrow her crutches to save the cost of renting another prop. “I told him that I kind of come with the crutches.” But she also said she was game for a crazy photo session, and so Ursula Watersky entered the infamous halls of C. Estes Kefauver Memorial High.

“That was the Lampoon genius,” Hirsch says. “Make fun of everything. Take the thing that frightens you the most and make fun it, and then you’re not scared of it.”

“I was the only one who had $300 to lend John Belushi so he could fly to California to audition for Animal House.”

Although none of her crowd was making much money then, she was putting a little aside in a savings account, which turned out to be crucial. “I was the only one who had $300 to lend John Belushi so he could fly to California to audition for Animal House.”

Early successes were balanced by setbacks. She had a short stint as a writer on a cable comedy show called It’s Garry Shandling’s Show. Hirsch thought it was going well; she had reaped some good feedback for her contributions. Next thing she knew, it was all over. “I was fired the same day that they fired Larry David.”

David went on to help create the groundbreaking sitcom, Seinfeld, and then earned accolades as the querulous lead character in Curb Your Enthusiasm. Though Hirsch garnered her share of later successes, she believes she was sacked for not fitting into a male-dominated profession. As for the man who also was fired, well, “Larry was just irascible. Would you want to be around that all day?”

She works with female writers in Los Angeles to help shape their proposals for possible TV series. She hopes that bringing more women into her field will make it more likely to create enduring shows like Murphy Brown, which still ranks as her favorite place to work.

“It was the perfect combination of a great room of writers—men and women, all smart, all funny, all collaborative; a great cast led by the amazing Candice Bergen—with her silly sense of humor, good cheer, and great grace. She set the tone, and because we knew we were writing the last [10th] season of a history-making show, we poured our hearts and souls into every single episode.”

While making history, Hirsch also made sure one storyline referred to Rollins and required several actors to don the blue-and-white basketball uniforms of the Tars.

These days, Hirsch is writing the book for a musical, developing a TV pilot with another former Lampoon editor, pitching a screenplay, and working on a memoir.

She also volunteers with Faith in America, a group that works with parents and religious leaders to ease acceptance of children who are gay, lesbian, bisexual, or transgender. It was started by a childhood friend from Trenton—Mitchell Gold—who built a successful furniture company in North Carolina while recognizing the difficulties facing the LGBT community in his area.

Don’t aim to get to one position. If your goal is to continue to feed a feeling of happiness and fulfillment, then the means to that goal can change.

Although Hirsch’s path to and from Rollins took some unpredictable turns, she finds a lesson in the variety. “You don’t have to know just one thing. Don’t aim to get to one position. If your goal is to continue to feed a feeling of happiness and fulfillment, then the means to that goal can change.”

Indeed, looking back, she now realizes “the plan always was to feel like I did when I was in the third grade.”