Sweet at the Top 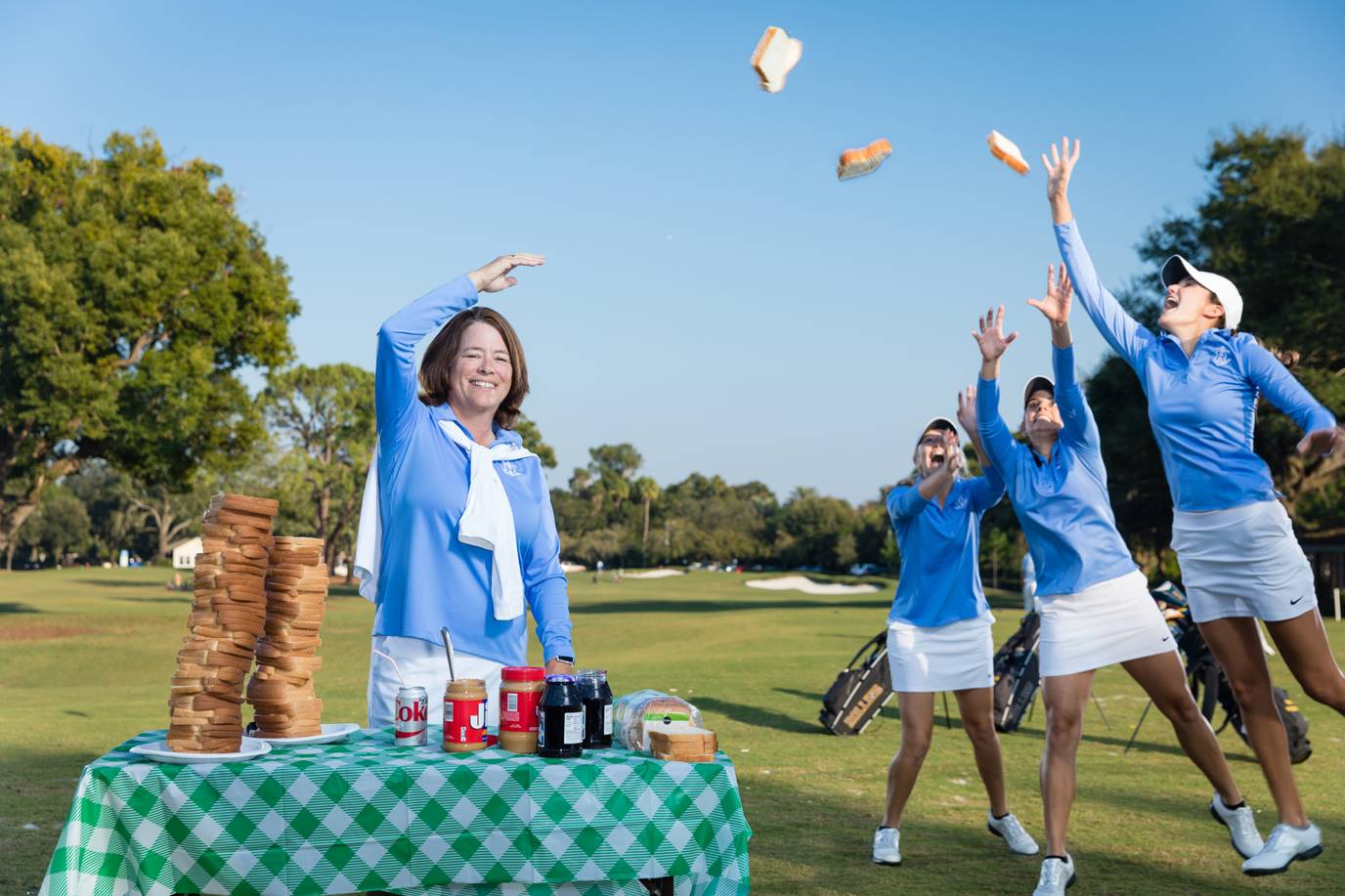 What do caffeine, junk food, and a little kid’s favorite sandwich have to do with Julie Garner’s success as coach of the women’s golf team? Everything.

Six Division II championships. Four national coach of the year awards. A legacy that spans three decades. Julie Garner stands as one of America’s best and most admired collegiate women’s golf coaches, a fierce yet amicable competitor who consistently guides Rollins to unparalleled heights in a sport where life at the top can be fleeting.

When gauging her impact on the College, it’s tempting to focus solely on the trophy case. But all the accolades are mere outward manifestations of an inner drive. To understand Garner’s greatness—on and off the course—take a closer look at the little things that shape her. Like Diet Coke, doughnuts, and PB&J sandwiches.

Robbie Davis has coached the women’s golf team at Florida Southern College since 1997. With four national titles, he’s one of the few D-II coaches whose resume rivals Garner’s. No one fights harder to beat the Tars. And no one has more respect for what Garner brings to the game.

“Even though she’s an extreme competitor, she’s probably one of the kindest, most thoughtful people you’ll ever meet,” Davis says. “Whenever I see her, she always calls out my name and wants a hug. Julie’s a great friend to me and so many other people. She’s not just a coach, she’s an ambassador.”

To fuel her high-octane motor—and keep up with 18- to 22-year-olds bouncing around sweltering Florida fairways—Garner requires ample amounts of caffeine. So Davis makes it a point to bring her a Diet Coke every time they square off. Garner returns the favor by buying Davis the sugary vice he craves most: a box of Entenmann’s.

The Diet Coke-doughnut exchange is a quirky ritual that sets the stage for a friendly rivalry between two of the top programs in the Sunshine State Conference—and players from both sides enjoy getting in on the act. Together, the Mocs and Tars recently surprised their coaches with an “anniversary” card to celebrate their 20th year as “working wife and husband.”

Everywhere Garner goes, her quick wit, eccentricities, and zest for life make folks smile. Jennifer McNeil, women’s golf coach at St. Edwards University in Austin, Texas, recalls standing in the parking lot after one tournament in North Carolina. She looked over and “there was Julie, singing aloud to her iPod, just bee-bopping along. I thought, ‘Man, to be that free would be awesome.’”

“People think she’s super intense all the time,” McNeil adds, “but she’s really not. Sure, she wants to win—no qualms about that. But she’s also such a good sportsman. She’s all about the betterment of the game and the player. For someone who really should be in our hall of fame one day, she’s very humble and real.”

Before each practice, Garner does something so earth-shattering, so avant-garde, that the simple idea could revolutionize the very nature of coaching. She makes every player on her team a peanut butter and jelly sandwich.

“I always get the PB&J all the way to the edges,” Garner says, explaining the metaphorical nature behind her meticulous craftsmanship. “If I’m going to sit there and make the best PB&J sandwiches I can, then my players can do the same in life.”

Don’t let the PB&J fool you. Garner’s no softie. She requires a lot from the young women who sign up to be part of her program. They have to be all in with a workload that includes 17-hour-a-week practices, more travel time than any other sport on campus, and the studying required to improve the team’s already stout 3.3 GPA.

But Garner also knows that “happy golfers play better golf”—one of the many truisms she’s prone to rattle off, like “the ball doesn’t know what division you played in” and “the preparation in November pays off in May”—so she’s pretty adept at finding unique ways to put her championship-caliber athletes in an optimal state of mind.

A few years ago, Garner sensed the need to implement a fresh perspective, one that would build on her “old school” style of hitting the range and “finding your game in the dirt.” So she turned to Vision 54, an innovative sports psychology outfit that takes a holistic approach to making golf fulfilling and fun.

“When you’ve done this for as long as I have, things can get kind of stale,” Garner says. “But Vision 54 really helped me see the importance of treating each player individually, honoring who they are, understanding how they learn, and giving them some freedom to take ownership for their improvement. It really refreshed my philosophy.”

The Creaky Ankle of Destiny

Growing up on a golf course in Chattanooga, Tennessee, Garner played the game simply because it was a “convenient” option. A multisport athlete, her true passion was volleyball—but any hopes of playing in college were dashed when, as a senior in high school, she twice sprained her left ankle. To this day it still cracks.

Bum ankle and all, she enrolled at Auburn, where her late father—an electrical engineer with a Type A work ethic—had found his way with “no money and two pairs of new socks.”

“My dad was very poor growing up,” Garner says, “but he went on to work 30-something years at DuPont and built this incredible life for me and my brothers.”

As a freshman, Garner walked on to the golf team and broke into the starting five by the spring season. The next year, Auburn cut its women’s golf program. So she drove to Tuscaloosa (the Tigers’ arch rival still had a team) and got a scholarship by hitting range balls for the coach at Alabama. Garner, who became co-captain of the Crimson Tide, earned three varsity letters and a degree in journalism.

In 1984, the same year she won the Tennessee Women’s Amateur, Garner began the first of her three head-coaching stints at Rollins. In those days, the NCAA didn’t have a Division II national tournament for women’s golf (that didn’t come along until 1996), so Rollins competed against Division I programs. Still, Garner led the Tars to a second-place ranking to end the 1987 season before taking a job at Disney.

In 1996, she returned to Rollins for a year and a half. Then Nike Golf courted her to become product line manager for its women’s golf apparel and accessories business. Yet even with such a high-profile job, Garner deeply missed her true calling as a coach. She came back to the school for good in 2000 and won five D-II titles between 2003 and 2008.

Over the past 16 years, the Tars have finished in the top four at the national tournament 13 times. This spring, the program won its sixth D-II crown and 13th overall dating to 1948.

“Julie’s definitely the No. 1 coach in Division II, and she’s really separated herself from the pack,” Florida Southern’s Davis says. “She’s raised the bar for the competitiveness of golf by going after D-I recruits.”

Fourteen years ago, one of those recruits was Charlotte Campbell Daughan ’06, perhaps the most successful athlete in Rollins history. Undefeated in postseason play, she led the Tars to four straight conference, regional, and national titles from 2003 to 2006. As an individual, she won D-II player of the year four times and the national championship twice.

Daughan acknowledges she had her choice of suitors coming out of high school, “but I chose Rollins because Julie really believed in me. She recruited me unlike any other school, and it was such an easy decision to go and play there.”

“She certainly has high expectations, but she's the type of person that you want to win for,” Daughan says. “Plus, you could probably talk her into going to the Cracker Barrel with you at any time, any day.”

Free to Focus on the Big Picture

To a player, the women on Rollins’ golf team will tell you Garner cares more about them as individuals—their academics, their happiness, their future—than about how well they swing a club.

“I can call Coach and ask her anything,” says Madison Lellyo ’18, a member of the 2016 national championship team. “She’s taught me so much about life. That’s a big part of my experience at Rollins, and it’s all built around Coach Julie.”

In keeping with the College’s mission, Garner is equipping students to become global citizens and responsible leaders—even going so far as to teach her first-ever class last year, Sports Analytics, with psychology professor Alice Davidson.

The art of teaching, Garner reflects, requires a lot of passion, just like being a coach. But at the end of the day, she still prefers giving lessons on the links—Diet Coke in hand—over lecturing in a classroom. Just give her some moldable minds motivated by peanut butter and jelly sandwiches and she’s good to go.

“The thing about Rollins is, I’m not paid to win. That’s not how I’m measured,” Garner says. “That’s what people notice, but there’s a lot of value in finding the student-athletes who are the best fits for the College. Once here, if I can provide them a balance in life that feels comfortable and like home, they’re going to play better and have a great college experience.”