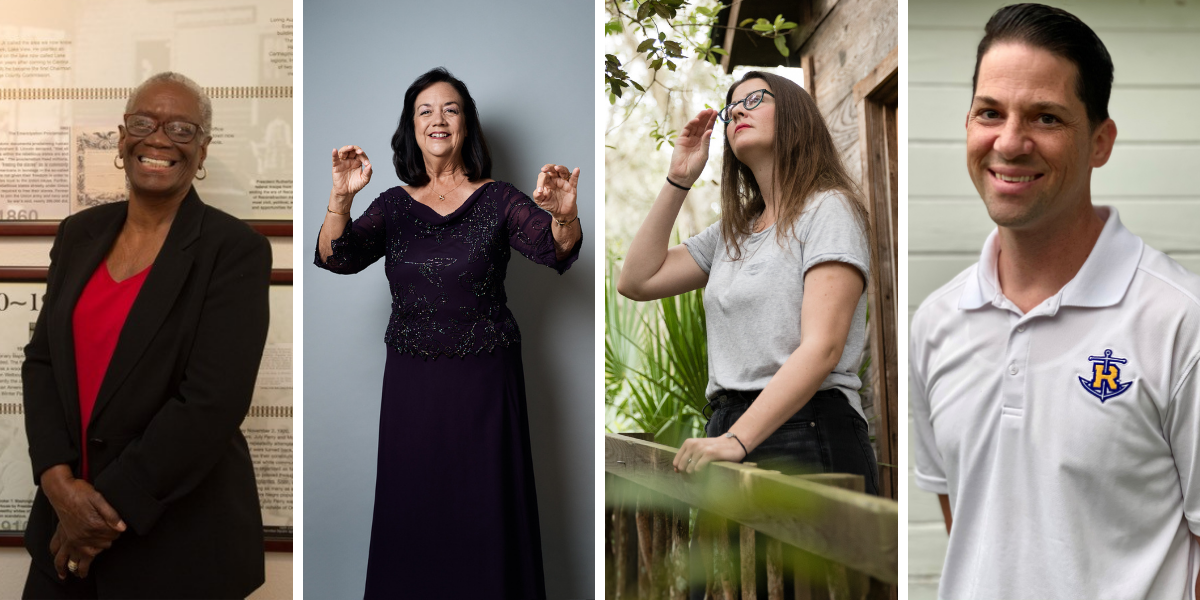 Each year, the Rollins Alumni Awards recognize graduates who have made extraordinary contributions to society in their meaningful lives and productive careers. Graduates are nominated by faculty, staff, alumni, and community members, and the recipients will be recognized during the first-ever virtual Alumni Weekend celebration, March 4-7, 2021. This year’s honorees include graduates who have made significant contributions in everything from historical preservation and education administration to the world of music and best-selling fiction.

In honor of beloved alumnus Fred Rogers ’51 ’74H, this award recognizes prominent alumni who exemplify the Rollins mission of global citizenship and responsible leadership through their extraordinary achievements and impact on society.

As the chief historian of the Hannibal Square Heritage Center, Fairolyn H. Livingston ’83 is known as the “institutional memory of Winter Park’s west side,” where she was raised by what she lovingly refers to as a village. She earned her bachelor’s degree in humanities from Rollins’ Hamilton Holt School, is a retired human service specialist with the State of Florida, and has been associated with the Heritage Center since it opened in 2007, becoming its chief historian in 2014. In 1997, Livingston received the Rhea Marsh and Dorothy Lockhart Smith Research Grant—awarded annually by Rollins’ Olin Library in partnership with the Winter Park Public Library—to support research related to local history. In 2018, Winter Park Magazine featured Livingston as one of the city’s 10 “Most Influential People” for her contributions to preserving and understanding Central Florida’s African American history.

An accomplished composer, conductor, and clinician, Sally K. Albrecht ’76 has performed at numerous iconic venues, including the Lincoln Center, Carnegie Hall, and the Kennedy Center. One of her most beloved compositions was performed at the 2009 inauguration of President Barack Obama. It all started more than four decades ago at the Fred Stone Theatre—Rollins’ humble, longtime proving ground for aspiring stage performers—where Albrecht cut her teeth as a music and theatre double major. Throughout her 40-plus-year career, Albrecht has produced more than 600 popular choral publications, plus multiple elementary songbooks, musicals, and instructional DVDs. She is a member of Rollins’ Cloverleaf Society and previously served on the President’s Leadership Council.

English major Kristen Arnett ’12 was named a New York Times best-selling author in 2019 for her debut novel, Mostly Dead Things, which tells the story of a woman trying to put life—and the family taxidermy business—back together in the wake of her father’s suicide. The Hamilton Holt School grad was awarded Ninth Letter’s Literary Award in Fiction and was named a Spring 2020 Shearing Fellow at the prestigious Black Mountain Institute. She also serves as a columnist for Literary Hub, and her work has appeared everywhere from the North American Review and Buzzfeed to the PBS Newshour and The Guardian. Arnett—who has two new novels in the works—credits Rollins for helping her develop the writerly identity that now distinguishes her: an author for whom place is as much a living, breathing character as it is a set piece.

Neil Otto ’05 currently serves as an administrator at Orange County Public Schools, where he specializes in talent acquisition and HR compliance. He was instrumental in the development of the new Pathways to Teaching program, a unique partnership between OCPS and the Hamilton Holt School that helps paraprofessionals earn their education degree and teaching certificate. Otto was nominated for the Alumni Service Award by Brian Barilone, director of admission for the Hamilton Holt School, who shared how integral Otto has been to the success of the program, which has garnered accolades and additional funding due to its impact. Otto earned his bachelor’s degree in economics from the Hamilton Holt School and has served as an alumni volunteer for the Center for Career & Life Planning in multiple capacities.

Do you know a Rollins graduate who’s making a difference in the community through their accomplishments, leadership, and commitment to service? Fill out this form to nominate your picks for next year’s Alumni Awards.